Sunshine after the rain...


"There are moments when troubles enter our lives and we can do nothing to avoid them. But they are there for a reason. Only when we have overcome them will we understand why they were there.”

Beautiful Giang passed away last week. Having been with her for the last 6 months, I was devastated with the news. There was no descent, she was not sick, it all happened out of the blue which caught me off guard more than anything.
Giang was 17, but could be picked up like a toddler. When I first arrived, I was told to not bother with her, to not take her out of her room as there was no point. She was deaf, blind, could not understand anything, why would I take her out? Some other volunteers and I insisted on taking her out whilst we were there. Even just for some fresh air! Over the last 6 months, I have watched Giang respond to music and dance, I have seen her grasp for things when closer to her eyes. I have noticed that she would turn her head towards the direction of the music and when I would hold her close and dance, she would look at me and her little hand would rise up and stroke my cheek. One day during the first month of meeting her, I had her on my lap and she began pulling at her shorts to take them off. She got half way and I was getting agitated at her, thinking, why are you undressing yourself!?! About 2 seconds later I understood. I felt the warm patch on my pants. She had wee'd and was taking her wet shorts off. This anecdote made me realise, she understands alright, no one can tell me she doesn't!
I would moisturize her fragile little legs and massage them as I went. She would laugh and it was so cute, she would bring her hands up to her mouth and laugh behind them....
Giang has taught me so much about the human spirit and about the will to survive. I wonder what was really going through her head sometimes and whether she was in pain and could not express it to us. I know she is at peace now and not suffering.
I was fortunate to meet her mother 2 weeks before her passing and I am so glad that her mother got to see her recently. I was so excited telling her mother how much I loved Giang, how we have taken her swimming, dancing, out to a restaurant. I took pictures of the two of them together and promised to get them to her next time she visited.
I went and visited her mother out in the village. She was not expecting me and when she saw me get out of the car, she dropped the glass she was holding, ran up to me and collapsed in a sob in my arms. I felt my heart break into a million tiny pieces for her. She was wailing as only a grieving mother can. I could not move, could not do anything more except cry silently with her, whilst trying to comfort and hold her. She was thanking me for everything we have done for Giang over and over again. Her husband died from cancer a few years back and so she had to go find a job and had no one to look after Giang. She had no choice but to put her in orphanages and ultimately at Peace Village. I gave her an album full of photos of GIang with me and the other volunteers and she sobbed and kissed every photo. She broke down when she saw the picture of her and Giang. It's the only photo she has of them together. If it wasn't for the photos I gave her, the only other photo of her she would have had is one of Giang in the casket. We lit a lantern and watched it sail up into the sky. I told her Giang would be fine and safe with her father now. She asked me to come and visit her again when I could and I told her I would.
The day which we fear as our last is but the birthday of eternity. R.I.P Giang... 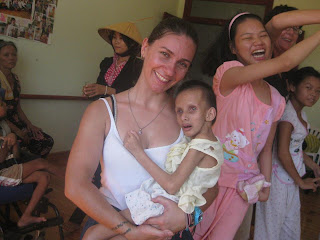 To top off my week, I was getting ready to pack up and leave the orphanage when the boys and the mother come and call me in. Something was going down; I could see three boys on their knees, hands behind head, execution style, with the older kingpin boys hovering on top of them. The mother did not look happy. The boys had 'guilty' written all over their faces.
I asked what was going on and no one would answer me. So I asked again and some of the other boys told me "an cap". Stole. Uh oh. I asked what did they boys steal? I got told money. From who? Other children at school. I asked them to give me the money. Heads still bowed, the boys told me no, no more money, they bought ice cream with it.
After a lengthy discussion about stealing and ending up in prison, to the fact that it is wrong, and if they want something they need to ask, I told them that I would be showing up at their school the next day so we can find these children they stole from, apologise and give them back their money. Their eyes grew large like a deer caught in headlights; I can imagine that what I was suggesting was going to be humiliating and embarrassing. One of the boys started crying and when asked what was wrong, he said that he was afraid that I would not like him anymore. I explained that of course I liked them. I told them that  everyone made mistakes, what we had to do was to fix it. Then its all over.

I marched up to the boys school and upon entering the gates, a stir began which moved like a Mexican wave around the rooms: there was a white girl in the school yard! I did a lap and found the three culprits. With the help of the mother, she explained to their teacher what we were going to do. They each pointed out the children they stole from and I took them all into the playground, away from all the other students. The mother spoke to them, the boys spoke to the children, apologised and then I handed them money to hand back to the children.
School was nearly over and so I had a gathering of parents circling the perimeter, trying to listen to what was going on. What could possibly be so important that a westerner was here?
The boys were nervous, fidgeting, had their heads bowed, playing with their fingers. It must have been a very hard thing to do and I was proud that they rose to their mistake and made it right. I explained this to them and gave them a hi - 5 and a cuddle. They smiled and I could hear them exhale at this point and their little hearts go back to a steady beat.
I sent them back to class and then went and waited for all our 26 middle primary children to come out. I had many nods and smiles from the other parents, some looked confused at to why I was there, some clearly thought I was crazy that it was 36 degrees and I had bare skin showing and was exposed to the sun. (Here in Nam, white skin is considered beautiful; the darker the skin, the lower social status apparently as they assume you work outdoors in the fields etc. In this heat, I kid you not, everyone is dressed like a ninja with only the eyes exposed!) When the bell rang, there was no mistaking as to which child I was picking up from school: most of them saw me from across the playground and soon enough, all you could hear was "anna, anna, anna" and many feet shuffling as fast as they could through the dirt to get to me. They ran up to me and I got my cuddles from the girls and a hi - 5 from the boys. I felt very special that moment. I looked at the children and noticed that they were all beaming, chests inflated as they looked around at all the other children and parents... my kids walked out with me with an air about them, as they looked as the others and silently told them "yeah! she is with me!".
They each were holding a part of me as we exited the school together. I asked who wanted an ice cream, which was followed by an ear bursting unified "yay". If this was a movie, the camera would capture the look on all the mothers and children watching us, slow motion an angle on me and the kids walking away all in one big bubble of love and then fade out to the sun setting on the horizon.....

To top this story off, I have to tell you that yesterday, one of the boys that stole, came back from school and came and handed me some money. I asked what for and they explained to me that he found the money in the dirt on the way home from school and it wasn't his, so he was handing it to me. I told the Director and she was giving me the thumbs up.... Mistakes - call them unexpected learning experiences.

Must leave you troops as I have an outbreak of head lice at the orphanage. I armed with my swimming cap on, 10 bottles of treatment and nit combs and I am off to combat!
Bring on August!

Posted by Anna LittleShoe at 2:31 AM