Birthdays are nature's way of telling us to eat more cake

"Your birthday is a special time to celebrate the gift of 'you' to the world"
Most birthdays come and go in the orphanage.... no celebration or even mention of the little ones special day. I decided to set up a birthday chart and try to acknowledge the child's birthday in some capacity. Getting them all gathered around a cake, singing Happy Birthday and creating a sense of connectedness, family and belonging makes me all warm and fuzzy inside and something I want to try and do for the children - at least make them feel good on their birthday... and feed them cake of course!
Some children have no known birth date which makes it harder, but here in Vietnam, every one turns a year older on Tet anyway so we shall celebrate theirs then! Just occurred to me then that I am actually 31 here already if I follow their custom.... uh oh.....

Thanh’s 14th Birthday was coming up and she wanted a jacket. I told her I would take her shopping for one. Quynh Chi is 7 years old who has a birth certificate saying she is a year younger. They won’t change it and so she has been held back from school until she turns “6”. She stays at the orphanage 24/7 with the younger toddlers while her peers go off to school.

I decided to take Quynh Chi with me and Thanh to the markets. Her little face lit up like Xmas lights when I asked her if she wanted to come. In the taxi, her eyes were glued to the window, mouth agape at the scenes her eyes were taking in.
When we got to the markets, she grabbed my hand and clung to it for dear life. It occurred to me then that this could be her first experience at a market. I did not even consider how this little expedition could be daunting for her. Entering the markets, the scents wafting through the air permeated her nostrils and she was holding her nose in disgust and gesturing to me that it was smelly. It’s funny how I do not even really notice the smell anymore and how it does not bother me. As we got deeper into the chaotic world of market stalls, she clung to me harder, wrapping both my arms around her, holding her in a bear hug the entire time we were there. I was telling her it was ok as we quickly walked through to find the clothes section.
Browsing aisles and shops for Thanh’s jacket and not finding the one she had in mind, I asked the girls if they wanted anything else. Out of everything Quynh Chi could have picked to buy – I pointed out shoes, bags, clothes, bracelets..... she chose an orange. Wow was all I could think. An orange? She didn’t want new sandals even though the ones she was wearing were one size too small, she did not ask for anything more than an orange. I bought her a frozen yoghurt and a 30cent sparkly bracelet too. I was hugged and kissed very tightly as a thank you.
Thanh was having no luck with her jacket and after countless efforts with the stalls and 2 happy laps, I realised she was after the thick, puffy winter coats. We are heading into summer and so of course we wouldn’t find a jacket like that till at least October!
I knew that because I am aware of seasons and stores rotations that coincide with the seasons.  These children aren’t aware because it is not part of their world. They just get given their clothes.
Social pragmatics and understanding conventions is something that comes second nature to most due to being exposed and conditioned to how one is expected to behave in social situations and out in the community.
Quynh Chi found it very confusing as to why we were wasting time waiting around in the supermarket after we had found what we wanted. She kept pulling me towards the exit once we had our items. She did not comprehend that to buy items from the supermarket, we had to wait for the cashier and pay for said items.
These little outings have so much potential for learning and engagement for these children.....

Tri from Peace Village also turned 20 this week. He asked me to get him beer for his birthday but I was not allowed (Director's orders) and so he had a tantrum. I bought him a cake and had everyone there to sing for him and he refused to come out of his room. I was trying not to laugh. He did eventually come out, under the condition that everyone made a big deal and fussed about him. Which we did.Well, it was his party and I guess he could cry if he wanted to. 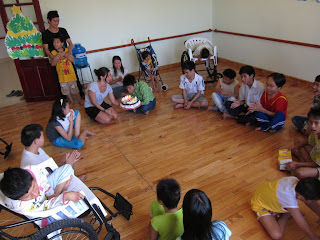 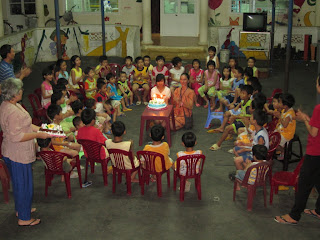 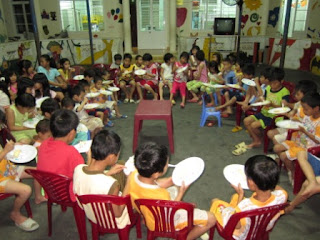 Posted by Anna LittleShoe at 5:12 PM