“I can accept failure, everyone fails at something. But I can’t accept not trying.” –Michael Jordan


Hey peeps!
Thought I would update you on some of the other things we have done here (that don't involve assemblies and angry faces!)

My new baby love Chien has his new girlfriend... the other baby dropped off a few weeks ago. She is a few weeks older than him and I actually met her father a few days ago. He walked in whilst we were talking and playing with her. He told me he was 26 years old and her mother died 5 days after giving birth. He said she was 6 weeks old and her name was Linh. The sadness was etched in his face. I could not imagine what he has been going through the last 6 weeks, losing his wife and his daughter. He was staring at her with this look full of sadness, wonder and some happiness. When I handed her over to him, tears rolled down his cheeks and mine as we sat there for a moment in silence, watching Linh.
He then asked me if I would adopt her and my heart stopped for a second. It was like I could feel his pain; see the anguish in his face and it broke my heart. I told him I wish I could but I was not allowed. I tried to offer some words of comfort to him that she was being taken care of well and she really was a happy, thriving little thing but he would not look at me, just kept his head bowed the entire time. 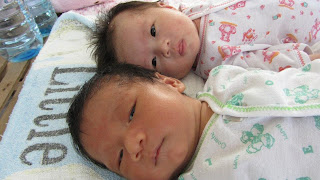 My plan to find the single Canadians coming has fallen through... well..... Sort of; there are still two single Canadians coming.... only problem is, is that they are 3 and 5 years old!!!!
But as one door closes, another opens right?! During my squished bus ride in a 12 seater bus with 24 other people, a grandfather offered me his grandson to marry. I had just finished yelling at the driver(in Vietnamese if you please!) for trying to charge me 100,000 dong for a 40,000dong bus fare and Pop must have thought the fiery Greek temper was a selling point to keep his grandson in check! I did not even turn around to see what the grandson looked like....

Sen update! Little Miss has been feisty and hitting me a lot lately when I force her to get up on all fours to practice her crawling (must be picking up on my attitude and temper recently!)
She crawled 2 – 3 paces forward last week!!! AND now she has finally realised she can stand on her feet so she stands up if you support her. She also claps her hands if you tell her in Vietnamese to clap her hands.
I fed her, her first banana the other day. At 17 months she still only gets runny goo to eat.... She loved it so much; she was hitting me for feeding her too slowly in between mouthfuls!
The assemblies seem to be making an impact and I was really touched when some children came up to me and handed back some of the stolen toys. Anthony lost 50,000 dong running around with the children and the mothers actually came and asked if it belonged to anyone as opposed to pocketing it. I was impressed and felt like we have taken a step forward..... at least today anyway!
Little bit of love goes a long way.... and it is these little achievements amongst a whole heap of adversities and chaos that make me sigh and say ‘yep....it is all worth it”