I am not afraid of storms...

"I am not afraid of storms for I am learning how to sail my ship..." - Louisa May Alcott

I never thought I would be able to feel so many different emotions in one day.
The last few weeks have been very challenging to say the least and I feel like I have been on an emotional roller coaster. I have been so full of pride for these children that sometimes I think my heart will swell right out of my chest; and other moments I ache and hurt for them so much that I feel like I can double over into a fetal position and cry myself till I run dry.

Sen: my beautiful baby girl has been doing so well lately. She has finally found her feet and realised that standing is a lot of fun and so will stand with me holding onto the side of the bed for ages. We practice our walking and I hope that she will walk by the end of the year. 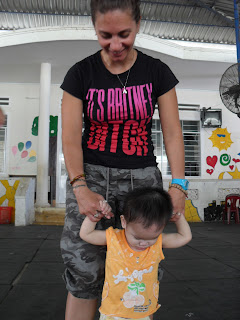 I feel that she has super sonic hearing (as they say if you lose one of your senses, the others become heightened) because when all the other children make noise, or the child she shares a cot with is screaming, she takes her chubby little hands and covers her ears until they all stop.
The orphanage trust me enough now to be able to allow me to take her out by myself. So, we have gone swimming and at first she was a bit apprehensive but has taken to it now. 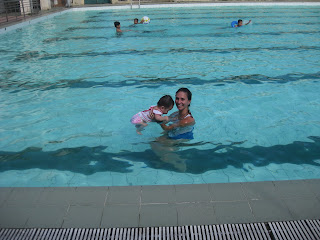 In regards to adoption, I feel like I am still fighting the losing battle. Upon last investigation and meeting, here are my options:

Could I move her to Ho Chi Minh to the ONE amazing blind school (run by Australia) I have found there where I am willing to sponsor and pay for her to go there? Apparently not. She belongs to the government and to this province. I cannot just chop and change children between provinces. I have to petition the government to do this. And that I will if I cannot have her. She cannot go to this school till she is 6, so I have 4 years to fight them. Unless she gets adopted by an American before that.

America has just struck a deal with Vietnam and this orphanage. Sen is on the list to be adopted out to America. They told me and asked me how I felt about it cos they were worried about my reaction. If I can't have her then I prefer her to get help in another developed country of course. Did my heart break into a million pieces at the same time? Without a doubt. Sen chose that moment to reach up for me and grab my face and giggle one of her famous hearty laughs. 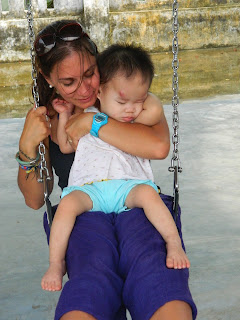 Someone told me that perhaps I am not meant to help and 'save' just one little orphan... but rather, make a difference to many more...... I am not sure what I am supposed to be doing! I just do what feels right for me and hope that my gut leads me down the right path... 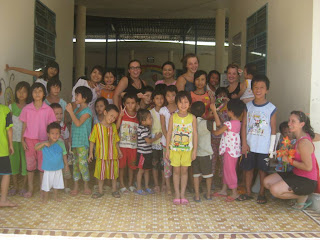 Some pretty major news is that the organisation I am with is closing down partnership with the NGO. After 8 years, it is all over and I worry now more than ever what will happen to these children. This means that there are no more volunteers coming through; there is no more human interaction for these children, no more learning english, , no more physio, no more nappies, no more fruit, no more medications...... the list goes on with what volunteers have provided for these children.

The last volunteer here leaves in 4 weeks. After that, I am a lone ranger! I will stay on despite not having support from a charity and do what I can with these children and with the money I have left over from all you wonderful people that have donated funds to me. I am hoping that when the dust settles, a new NGO will come in and take over...we are hopeful. However, that will not even begin to start happening till Feb next year.
Till then, I am going to come up with a plan and a basic budget to keep the basics and necessities going for these children.....

I created a monster a few weeks ago by having some of the girls in the orphanage come over to my house for a sleepover. The Director trusts me enough to take them for a weekend! I wish I had a video camera to record their reactions upon entering the house: they were amazed at everything. The squeals of delight that came from them was heart warming to see. They didn't know where to go and what to look at first: the vast space we have in our foyer/lounge room, the individual photos of each child plastered on our walls, the western toilet, the fact that we had hot water, mattresses and sheets on the beds! I was making their beds and they wanted to help me.... they kept trying to get in underneath the fitted sheet and were looking at me with some very confused expressions until I brought the top sheet and blanket out and showed them. They were scared of the western toilet and one girl was taking so long, I went to check on her; I found her, climbed up on the toilet seat, still trying to use it as a squat toilet. She looked so perplexed, trying to balance on the seat and pee at the same time. I went in and I showed her that she had to sit on it and we both burst into fits giggles over it. 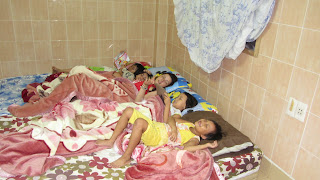 Took the girls out for proper vietnamese food as opposed to broth and rice and they ate so much I was so pleased. We took a ride to the supermarket at night and they were in awe, mouths agape, staring out the window at all the lights exclaiming how beautiful Tam Ky is at night as they have never seen it before. We played games in the arcade, had an ice cream and headed home where they lounged, played games and watched movies. Getting them to sleep was impossible as they were so excited they kept jumping up and down and wanting to get up. Managed to get them to sleep at 12.00am...... and they still got up at usual time of 5.00am!
I got many hugs and kisses and they told me they were beyond happy... beyond content, beyond excited, beyond anything they have ever felt. Tears pricked my eyes watching them bestow their gratitude on me. To help me, they even made the beds and folded the blankets and then when we got to the pool, my hair was decorated with many many flowers.
When the older girls slept over, they decided they would help me clean my room and they took everything out of the cupboards, out of toiletry bags, out of the suitcases and proceeded to redecorate and put everything back in a way that they saw fit. I had about 100 bobby pins on display on my dresser, they took out all my 'pretty dresses' and hung them up and decided my ugly clothes need to be in the suitcase. It took me a week to rearrange my room back and find all my items!

When I dropped them back at the orphanage the boys were asking when they could sleep over! I didn't even think they would want to come with me but they were very keen to. Within a minute, I had about 50 of them surrounding me pleading with me not to forget them and take them too. I told them we did not have enough space for 50 of them to sleep at once and so I will take groups of 6 - 8 for sleep overs until each one of them have had a turn.
The boys were so different to the girls..... they actually asked before they could enter my room and take a look around, where as the girls were running around like they had ants in their pants; the boys played on the computer for hours and were happy doing their own thing. 4 out of 6 older boys have never been to the beach before. Still blows my mind how they have never seen the ocean. We got to the beach and the boys were silent, just taking it all in. They sat down in the shade and when I asked if anyone wanted to come into the water with me, their faces lit up faster than you could say Der! I told them they had to stay near me and were not to go deeper than waist high. There were small waves and we spent about an hour in the water jumping and crashing into them. So simple. So much joy. It made my heart swell watching them. We ate fresh squid on the beach and went back happy and content with full bellies. 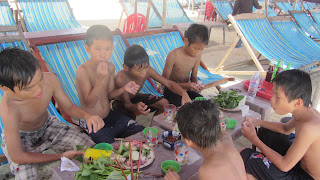 I still have 3 groups of sleep overs to go..... the sleepless nights with them here, watching them have fun is well worth it.....

Peace Village are trudging along with no major dramas.....4 of the older boys have been engaged in a computer course the last month or so and have been enjoying it. It's great to see them learning something and trying so hard to accomplish their tasks. Son tells me he wants to do really well and then learn photo shop to hopefully get a job and support himself. He is on the look out for a girlfriend too!

Love to you all
Posted by Anna LittleShoe at 2:34 AM