* One of my friends was coming to visit and so I had to skip the morning at the orphanage to go to DaNang and get her. The other volunteers told me that all the kids were asking for me and just walking around going "Anna, Anna, Anna" looking for me. Things like this just make my heart go mushy..... how will I extract myself from them!?! So, the bus trip up to DaNang..... my first time on a Vietnamese bus as I have been avoiding them. But it was $1.50 for the 2 hour trip instead of $30 for private car. So, here I was expecting to go to a bus station or bus stop, but I don't know what I was thinking! The bus literally just goes up the highway and if your standing on the side and want to get on, you flag it down. The bus then slows down to a crawl, where there is a man who stands at the open doors and his job is to grab your hand and lift you onto the bus before we speed off again. Again, I become the tourist attraction where for the entire 2 hours people stared at me. It was an interesting journey where I observed: people getting on and off the bus in random spots, people carrying live chickens, dead chickens, photocopiers and even a fridge that made it on the bus!
My darling friend forgot to get a visa and so could not enter the country. I then had to endure another bus ride back to Tam Ky, only to get onto another bus back to DaNang the next morning to go pick her up from the airport. Third bus trip was pretty much the same except there were 100 more people on it. All these old people got on the bus and we still had 1.5 hours to DaNang. Nobody moved for them, so I got up and offered my seat to the Grandpa who smiled at me. Then the bus began applauding and started giving me the thumbs up. I must have made a few young people feel guilty cos they then reluctantly got up and gave their seats to the other senior citizens. So, what was I to do now, in the middle of the bus hallway, wedged in between 2 giant boxes almost as tall as me, live ducks in front of me and dead chickens behind me and a lady vomiting into a plastic bag next to me? Turn my ipod on and sing and dance of course!
Just for fun, as soon as I picked my friend up when she finally made it, we went back to Tam Ky, only to have to catch another bus back to DaNang the day after for a Happy New Year feast at the main volunteer house. Third day in a row. So far, 10 hours of buses. Anyone would think I was enjoying these trips!
New lot of volunteers arrived and the norm is to go to Hoi An for the weekend.... who am I to break tradition?  So off to Hoi An again..... the kids and carers in the orphanage were happy to see me and calling out my name as I walked through the gates.....I swear it's the best feeling when they all smile at you and come running up for cuddles.
We went to My Son - historic religious relics site... it was raining and my giant purple raincoat made me look like a giant purple blob but at least I was not hard to lose! I accidentally bought a motorbike raincoat so I had this clear plastic square in front of me - and because of my height, this clear plastic square ended up at my crotch. Needless to say, the jokes began about me becoming the raincoat flasher...... 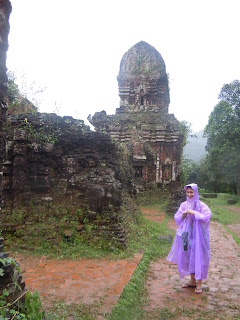 In Hoi An, we go to the orphanages and then we get pampered with massages and great food. This time I decided to get a foot peeling. You cannot wear shoes here as you are constantly taking them on and off to enter houses, children's rooms etc. Also because of the mud and rain, there is no point! They get wet and stay wet for a week. So rubber thongs it is but they leave your feet dry. This foot peeling was going to be amazing I just knew it. We rocked up and the lady pulls out an old fashioned blade/razor thing.... you know the ones that men used to get in the old days when they went to a barber to shave their face? exactly the same one! And she literally begins shaving the soles of my feet. Ummmmmm ok. Weird. Put this one down to a Vietnamese experience!
The rain has semi - stopped and so we have been attempting to ride the bicycles to placement. After the food and cakes I have over - indulged in, I need to bike ride back to Sydney. Except here, " big bum, fat legs" are considered 'sexy' so I am like model material :) Anyhoo, back to bike riding: first attempt saw me hitting a lazy cow in the middle of the highway who would not move.My options were: a) swerve left and risk getting hit by a truck b) swerve right fall into the muddy rice field or c) go straight and hit the cow. I went for option C. Second attempt at bike riding saw me turn a corner, lose control and fall into a muddy puddle, skinning my shin and scraping my palms. I got back on like a trooper, only to fall off it again 30 seconds later. This stack, was gold. I fell, let go of the bike and as the bike fell, I jumped off the bike and landed on both my feet off to the side. Stuntman material. Truly. After that, the other volunteers made me wear a motorbike helmet whilst riding as they did not trust me. Just to be safe, the 4th time we went riding, I was banned from the bikes and had to double up with my friend. I was cackling the entire way as my friend was riding and carrying my weight on the back. I was teasing her so much but she threatened to drop me into a puddle so I waved my white flag. 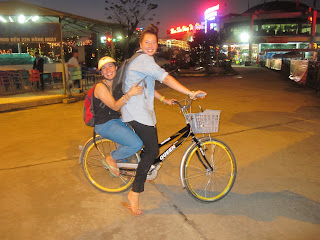 Talking about bikes and helmets: A dude riding his motorbike through the roundabout somehow lost his helmet. It fell off in the middle of the road. He looked at it once and decided to keep going. As soon as he was out of sight, two ladies, who witnessed this scene, from opposite ends of the roundabout, began running to retrieve said helmet. They both got to it at the same time, where a tug of war ensued for the fallen helmet. I am not sure who won, but someone must've been happy with their new freebie.
Back at the baby orphanage the older boys left me a surprise. Every time we get there, my camera gets taken from me where the older children have fun taking photos.  When I got my camera back at the end of placement, I went through my pics and as I am flicking through them, I let out a gasp and a shocked little scream. I had many pictures of the boys' penises on my camera. I could see the headlines now: "Western Girl here to adopt a baby, caught with child pornography pictures". I wish I spoke Viet now to tell them off. But I had to resort to showing the pics to the carers to tell them off for me and tell them to not do that with my camera or they won't have it again. I didn't want to tell them cos I was worried they would get beaten after we left.... when really, they are only at that curious age.
At Peace Village we had some success in teaching them a few songs in English. They loved a very simple song called "Hello, How are you?". Thats pretty much all the words and then they go round the circle and say their name as we say hello to them individually. I think we sang it for 20 minutes straight. Then I taught them heads, shoulders, knees and toes which also went down a treat. Such a simple thing, yet so much joy!
Another week has passed and so what do we do this weekend? Well.... a new volunteer came this week and he wanted to see Hoi An so why not? There is this cafe in Hoi An that makes the most amazing cake I have ever had in my life. Its chocolate and when you spoon into it, hot melted chocolate oozes out of it. The selling point and what it took to convince us to go back to Hoi An was that we could have this cake again. We went down for a day, just to eat yummy food and overdose on this cake. Yeah........... so much for losing weight over here! 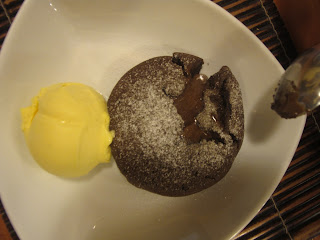 So Hoi An round 3? 4? (I have lost count) consisted of eating cakes, eating pizza worthy of Sydney standards, getting a coffee and honey body scrub and cucumber wrap and lounging on the beach for about 5 hours. Hard weekends here.
New Years is on Sunday (today!) so Hoi An was quiet yesterday. The children at the orphanages who have families/parents, get to go home. It's the only time of year they are allowed. I witnessed a few parents picking up their children. It was bittersweet to watch their faces as they hugged their children. I walk in with other volunteers and know these kids better than their parents do. I could tell the little blind twin was sick, she was not herself and when Laura approached and she heard her voice, she outstretched her hands for her to take her and cuddle her. The mum let her go but it was a little awkward as we didn't want to impose and take the child from her mother, but at the same time, she was reaching for Laura. I wonder what the mother was feeling.
The other children who do not have parents were lingering on the sides, observing. My heart broke watching the entire scene unfold. Would it be better to have family and go home once a year? Knowing your family cannot afford you and 'gave you up?" Especially when some kids like Tram, have 3 other siblings and she and her sister are the two 'chosen ones' who live in the orphanage when the other two stay at home? Or is it better to just not have parents and know that straight out but have to deal with not knowing where they have come from or who their families are and they were just given up. Either way sucks. How can we break this poverty cycle?
New Years Eve today and we have been out drinking since 11am. Home for a 'sleep' apparently where it all starts again in about an hour. I am told Year of the Dragon is a very prosperous time. I am just lucky I can start my new year all over again and make new resolutions! Yay!
Chuc Mung Num Moi - Happy New Year!
Posted by Anna LittleShoe at 4:37 PM