“The sweetness of reunion is the joy of heaven”

... I have no idea how to word this entry to be able to convey the emotions and intensity of my 'homecoming'.
From the moment I touched down and heard the Vietnamese around me, I smiled so wide it felt like my face was going to rip.
After an insane ordeal with planes, delays, rerouting, I arrived a day late at 1am exhausted yet unable to fall asleep.
How could I sleep knowing my babies were 7km away!!!! I woke up every hour thinking 'is it time yet?'. And finally the hour arrived!
I emerged from my hotel, got hit in the face with humidity and the heat and instead of scrounging up my face and gasping, I stopped and closed my eyes for a second standing on a 'standard 'street in Tam Ky. The best way I can describe it is by comparing it to holding your breath a fraction to long and when you let go and come up for air, this feeling floats through your entire body, your lungs get tingly as they fill with oxygen again.... That's how I felt. And all I could think of was: I'm home.
So, after a famous Mrs Hanh breakfast, I hopped on the motorbike and off we headed to the orphanage. I was getting butterflies at the thought of seeing them all. They were all expecting me yesterday you see. Everyone here was telling me that for the last few weeks its been nothing but 'Anna is coming, Anna is coming!'
We turned down the little gravel road that leads to the orphanage and for those last 100metres, it was like, all sounds around me had ceased and all I could hear was my own heart beating and the sound of the wind in my ears.
I got into the gate and before I was even off the bike, one of the boys sitting up on a tree, spotted me. All that was missing were a pair of binoculars around his neck. Couldn't help but think he was stationed there to spot me first. He screamed my name, rolled out of the tree, came crashing down before running out. He was in a fluster trying to decide to hug me first or go tell the others. His little foot dance in which direction to go won in my direction for a second, got a quick hi five before his feet changed directions toward entrance of the orphanage to yell 'Anna is here, it's Anna!' And within seconds one little voice, then two, then three, then forty were yelling my name and running towards me. I just stood there, didn't make it past the front steps when I was ambushed and had all these arms hug me, touch me and reach out for a touch if they weren't close enough for a hug. Most were calling my name to get me to look at them and acknowledge that I had seen them.
It's like I was hit with a wave of adrenalin. Like I been roaming in the desert for months, searching for a water source, a life source.... I found it. Right here, on the front steps of an orphanage that houses 80 precious little souls.
Once the kids made some room, the carers each came and hugged me and everyone was amazed at how I remembered everyone's names. Even the children tried to test me but I never failed. Their smiles confirmed to me: yes, she remembers me and my name. I'm not someone who can be forgotten.
The toddlers were next and little Huy, who I first met when he was months old, dumped in the mountains left to die, came running up to me smiling saying 'na' 'na' and jumped into my arms. He is 3.4 years old now.

Long, who cried and had tantrums about every 15 minutes has transformed into a smiling little toddler who also approached me but wouldn't hug me until coaxed by the older children that it was ok. 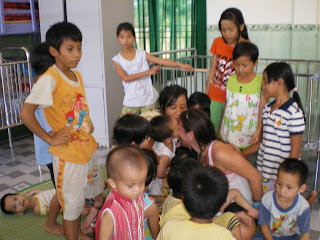 I then had about fifteen of them drag me towards the direction of Sen. About twenty of them never left my side. They pulled away from me and sat on the sidelines as I went into the disabled room and greeted Son, Trinh, Duyen, Phuc and finally Sen. She has grown so much in five months! I couldn't believe it. She is a lot stronger and sturdy at standing. There must have been to much noise in there with my support crew and so she kept covering her ears. I got many kisses and cuddles in before I was whisked away to see the babies and meet a few new editions. 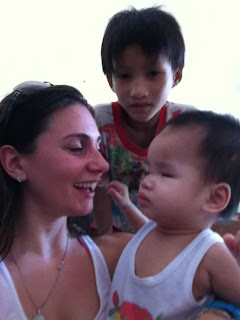 There were a few new carers there too and the way they greeted me was like they to, have known me for the last three years. They made it sound like I was talked about like a celebrity.
Apparently they have heard nothing but my name and stories about me from the kids and carers alike and so were eager to meet me.
The girls were proud to show me how the photo collage we made together was still intact on the wall, with pictures from our last year together.

It was chaotic and crazy and the orphanage was high on a buzz as I did happy laps around taking it all in again. 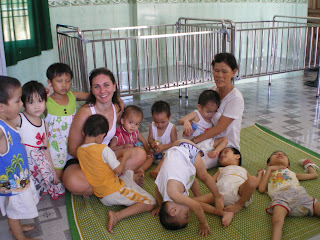 When I asked them what they wanted to do for the short time I was here it was unanimous: swimming pool. Then supermarket and then the markets.
I found it interesting that both boys and girls, first thing they wanted to do again was to sleep over at my house. Out of everything we did last year, that was one indelible memory and experience for them. Since there was no house to go to this year, swimming came in first choice next. 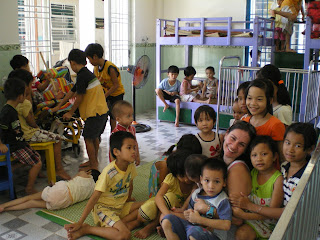 Peace village was also nothing short of an amazing welcome. I didn't actually think they would remember me and so they surprised me with their reactions: Son, Hai and Tri of course remembered me. Son was so excited to see me he practically dragged me down into his wheelchair.

He had a present for me that he bought and wrapped. It touched me, knowing that it would have cost him a fair bit in his world and that he had saved whatever money his family had given him to buy me a present. 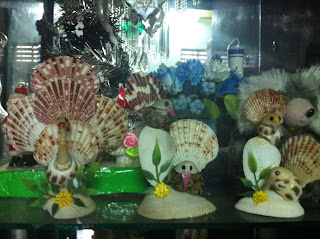 Truc, as usual came running out as he does to greet anyone and I wish I could have captured the moment he registered it was me.... He did this gallop run and began clapping his hands as he ran to me yelling my name, squeezing me hard when he reached me.
A few of the other residents who are mute, were quite clear in their communication in their recognition of me. Some touched my face, others clapped, others started giggling and laughing uncontrollably.
The carers hugged me so tight I swear they cut off circulation for a second and then they were crying.
So many new faces at peace village. 35 in total now. All the newbies I met were just as amazing as my originals.... Such a wide range of issues and disabilities. And still only three carers rostered on a day to take care of these residents. I take my hat off to them. If this is not one of the worlds hardest jobs, I don't know what is.
PV wants to go to the beach and karaoke. Ok then! I agreed whilst quickly doing a mental check and realising I didn't pack ear plugs.
Regardless of the heat, excessive decibels, my rock hard mattress, mosquitoes and trying to fit everything I want in,  it's going to be a busy yet incredible three weeks. 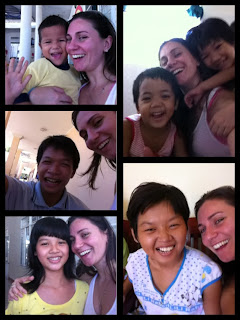 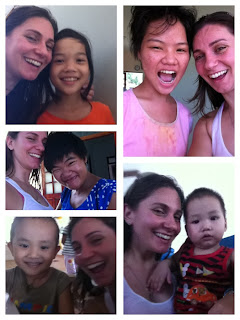 Posted by Anna LittleShoe at 5:49 PM