“The present moment is filled with joy and happiness. If you are attentive, you will see it"

If I wanted something done or to happen, I have found that I just have to spread the word first in a subtle way through the kids and the carers before talking to the director.
I had already asked about taking them to the beach and I got a flat no. She was really worried about them drowning and dare I say it, the paperwork that would go with that...

So I concocted a plan: it would take something special, something big for her to refuse me: so after feeling abit like Tom Cruise in a mission impossible film, I worked my web.
I told her that it was my birthday on the 8th although its on the 18th. ( I figured I could blame the missing '1' on translation issue) and I really wanted them to see a town outside of Tam Ky... I asked if I could take them to Hội An for a day, see the town and eat seafood on the beach. I didn't dare mention anything about the water and swimming.
She was a little hesitant but after I said 'please? ! It's my birthday!' She agreed as long as no swimming! Yes! Stage one of plan achieved!
I was agreeable of course and left her office with a huge grin on my face. Little did she know I had ulterior motives....
The children were waiting outside her office to see if it was a yay or nay and when they saw my smile they all ran up to me asking 'di Hội An?' And I said yes! We go to Hội An!
Cheers echoed throughout the foyer and then they were all really sweet and went in and thanked the director for allowing them. Was nice and respectful. She made a joke that when I was around she didn't exist and the children didn't pay her any attention. She said that the children don't love her as much as they love me! Whilst we were all having a chuckle over it, I made a mental note of the new Samsung Galaxy 5 in her hand and wondered how much of that was paid for by money meant for the children.... That phone could pay for them all to go to hoi an and then some!

So the day came for the excursion. The carers were just as excited as the children. It was nice to see them out, every one wearing their Sunday best.
5 buses transported 79 bodies to hoi an. 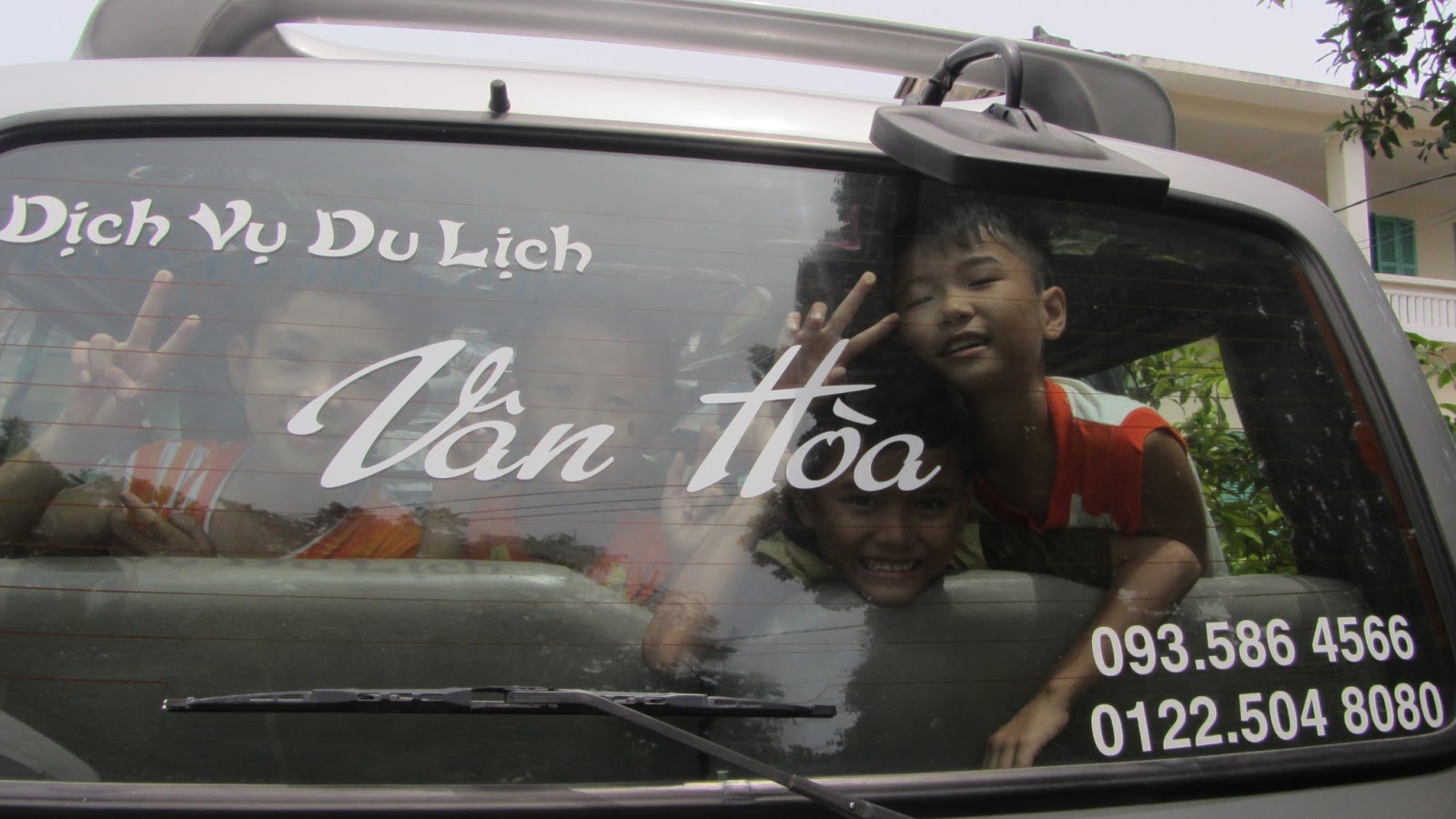 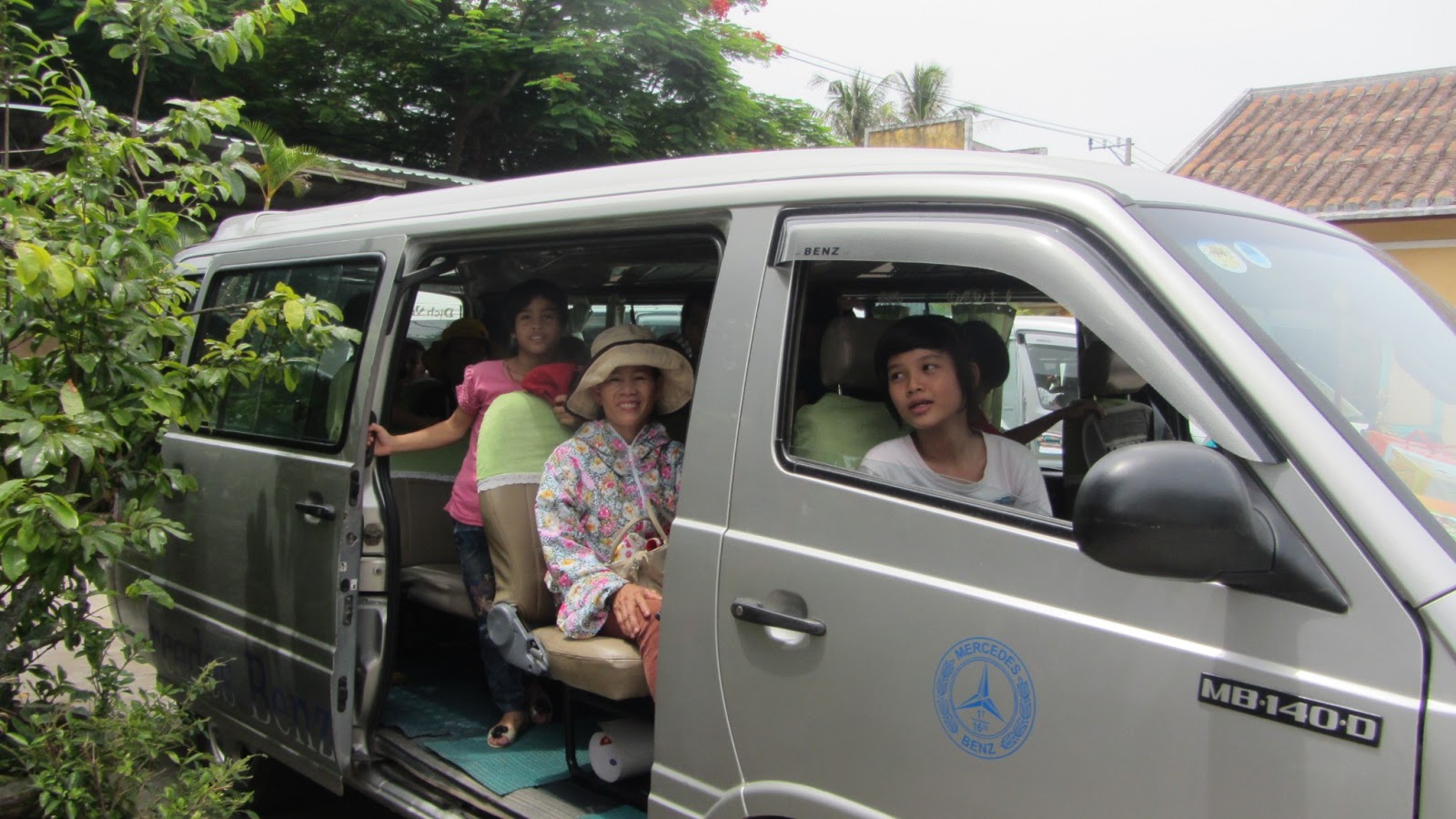 We went to visit the orphanage in hoi an which was... Interesting.
BO kids kept together and hoi an kids kept together. Almost felt like two gangs sizing each other up....
Hoi an orphanage has just over 100 kids and BO is catching up to them with 80.....
Hoi an orphanage is just not a nice place. I can vomit a whole heap of atrocities at this place but I shall control myself. Save their disgusting, corrupt stories for another blog.... 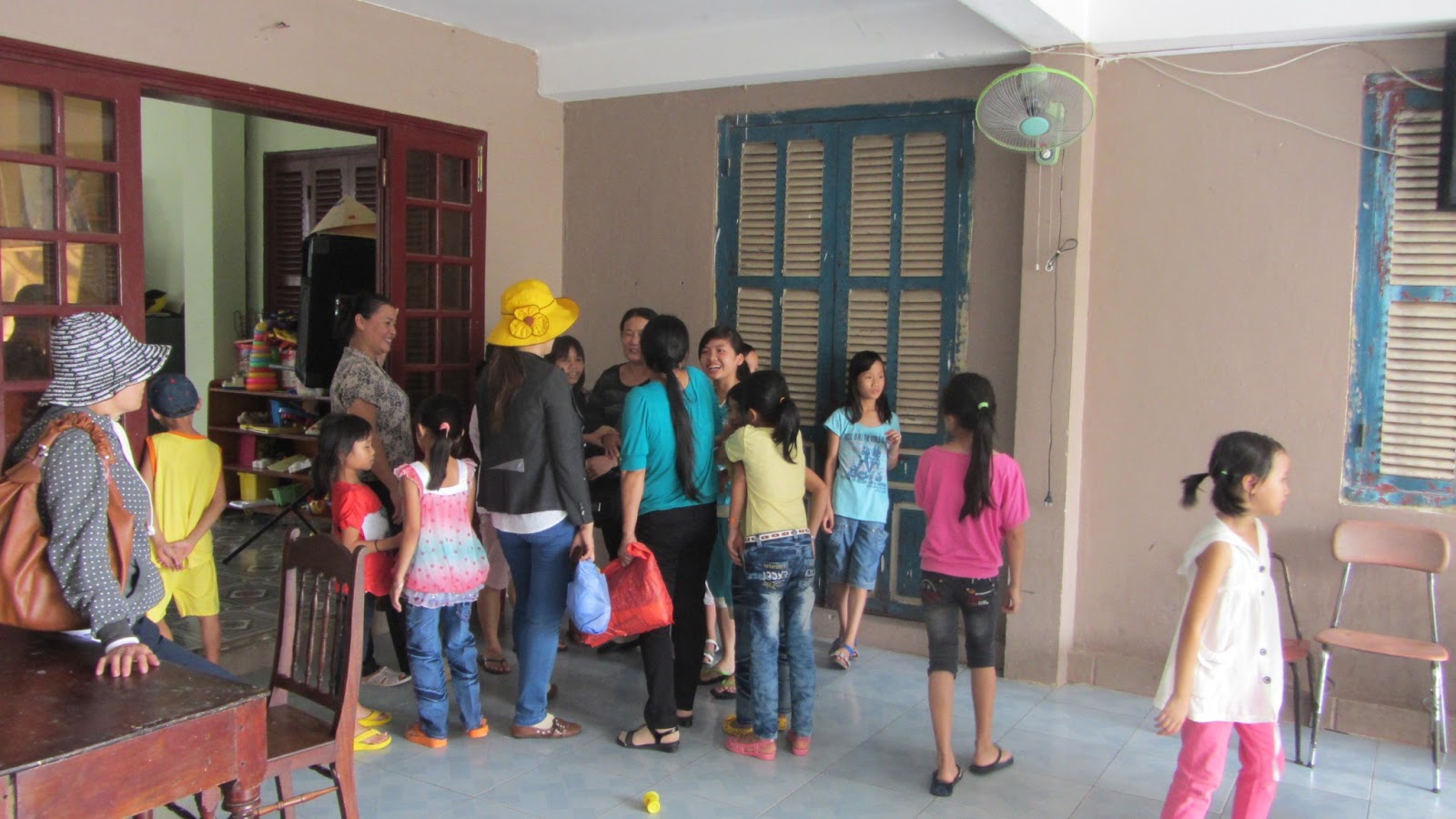 Anyway, the carers wanted to see it more than anyone so after I saw they all had a look, the kids were just hanging around the front, I yelled and made them all leave. Time to take control! As much as I wanted the carers to have fun, this day wasn't for them. I told them they could stay if they wanted and not come eat seafood at the beach and we can pick them up on way home.... Well.... missing out on seafood by the beach? They were the first back in the buses!
Some of the older children have seen the beach before.... When I snuck them there last year...... But the rest.... Watching them pull up at the beach.... Priceless. They kept asking me about swimming and I had to say no and tell them the carers didn't let them, not me....... 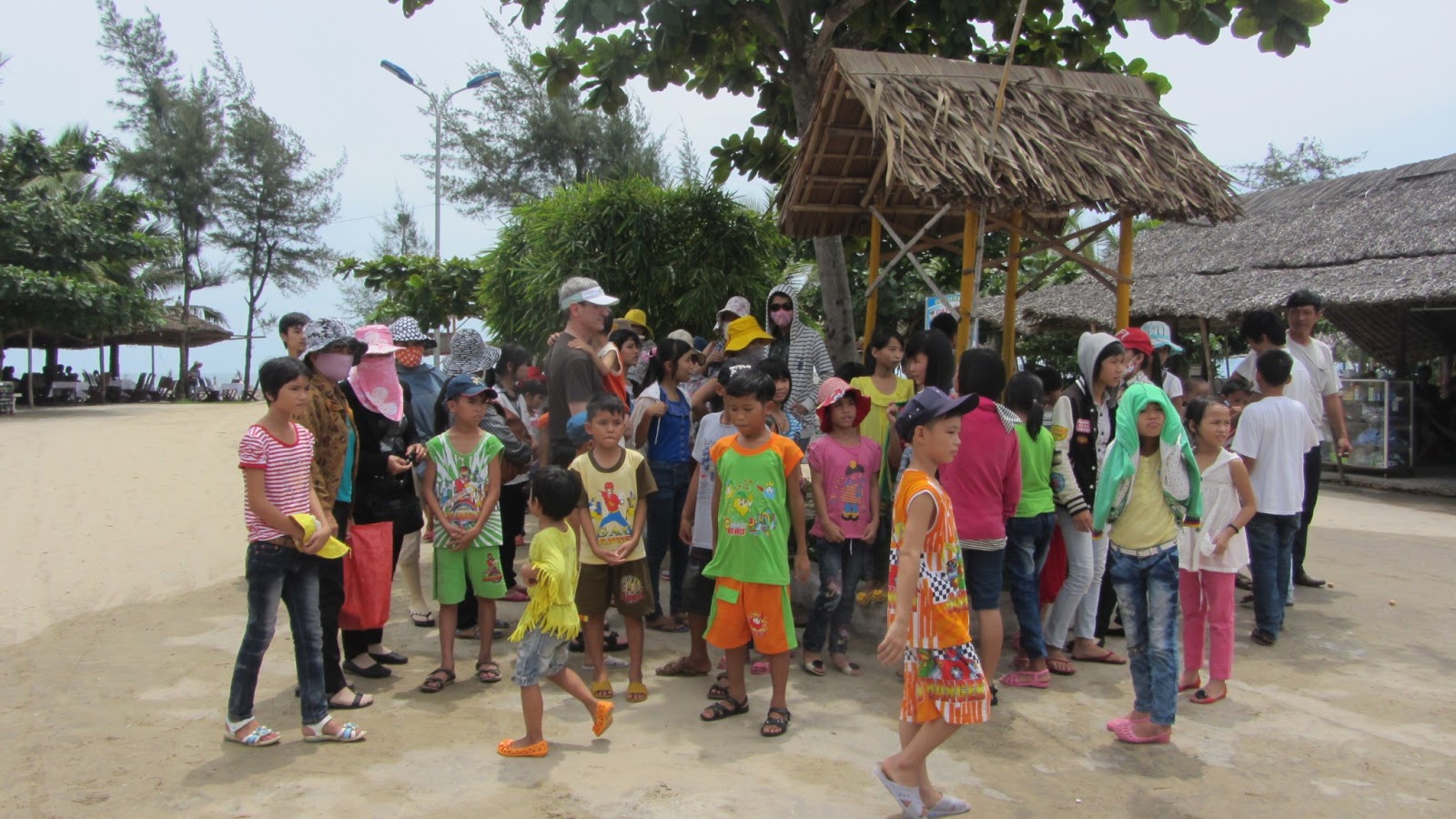 They gorged on the initial food not realising it was a four course meal! They got carried away and ended up being so full after the second course that I got them up for a play with some parachute men to try digest a little to be able to fit more in. 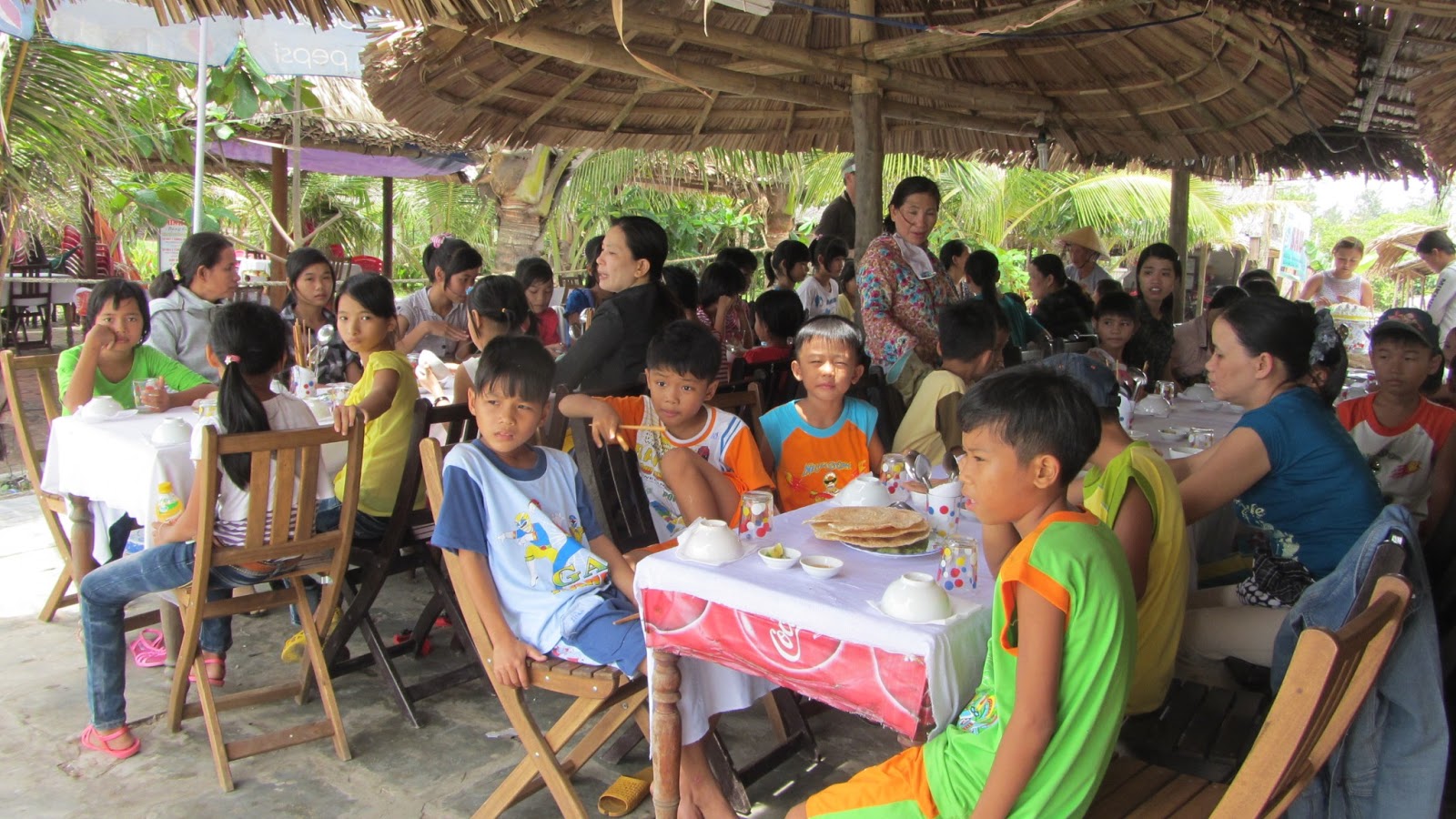 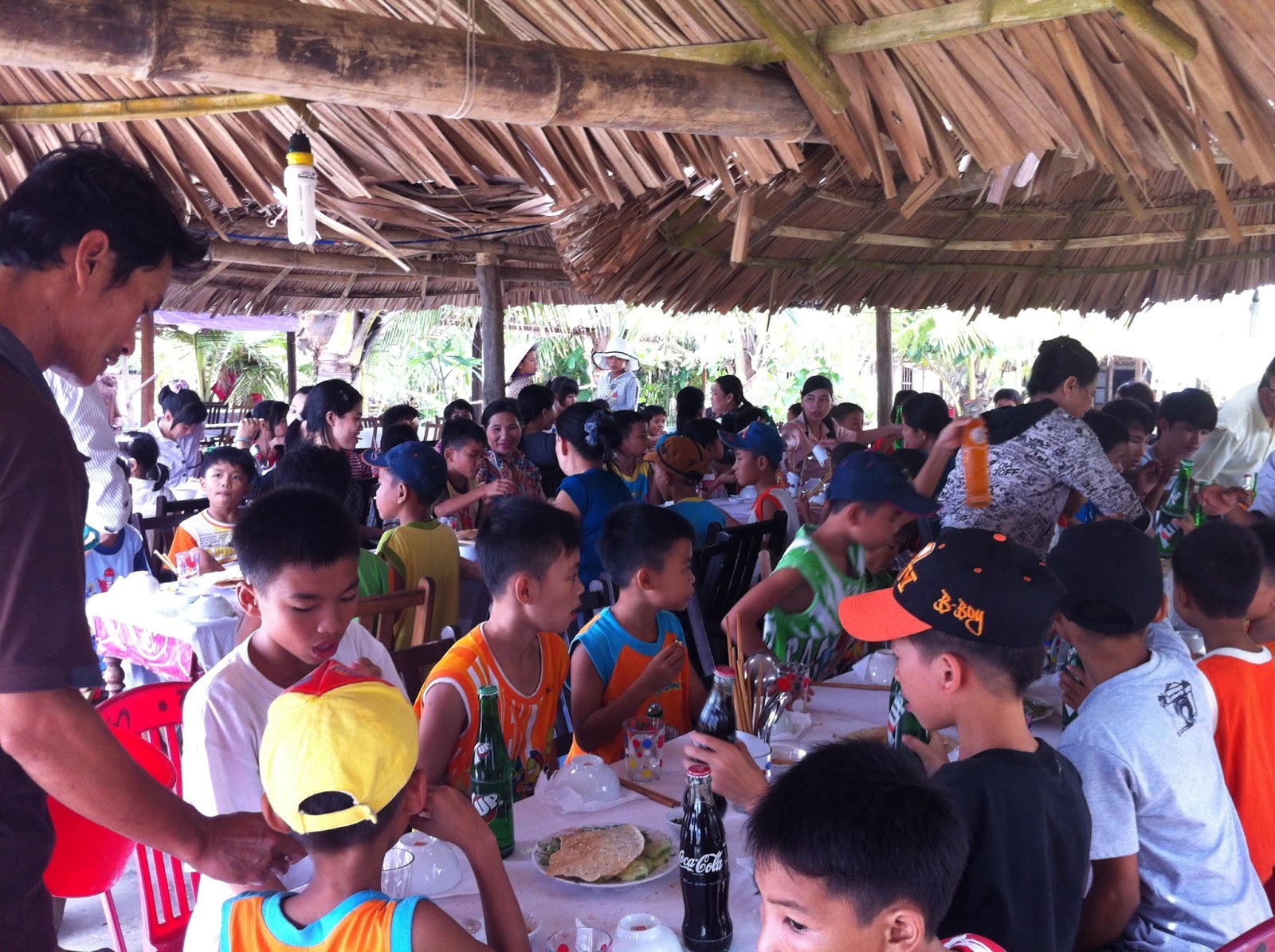 It was about now I thought about next phase of Operation: Splish Splash.
I got some of the kids to ask the carers about swimming knowing full well the answer would be no. Yes, I admit, I used the children to my advantage.. But really! It was ultimately for their benefit :)
So after the kids whinged abit about swimming, I took over and asked if I could take them down... Carers had a full belly by now, were happy, it was my time to shoot. At first they said no... So I asked if I could take them down into the sand. I got a yes. Ok, that's a start. 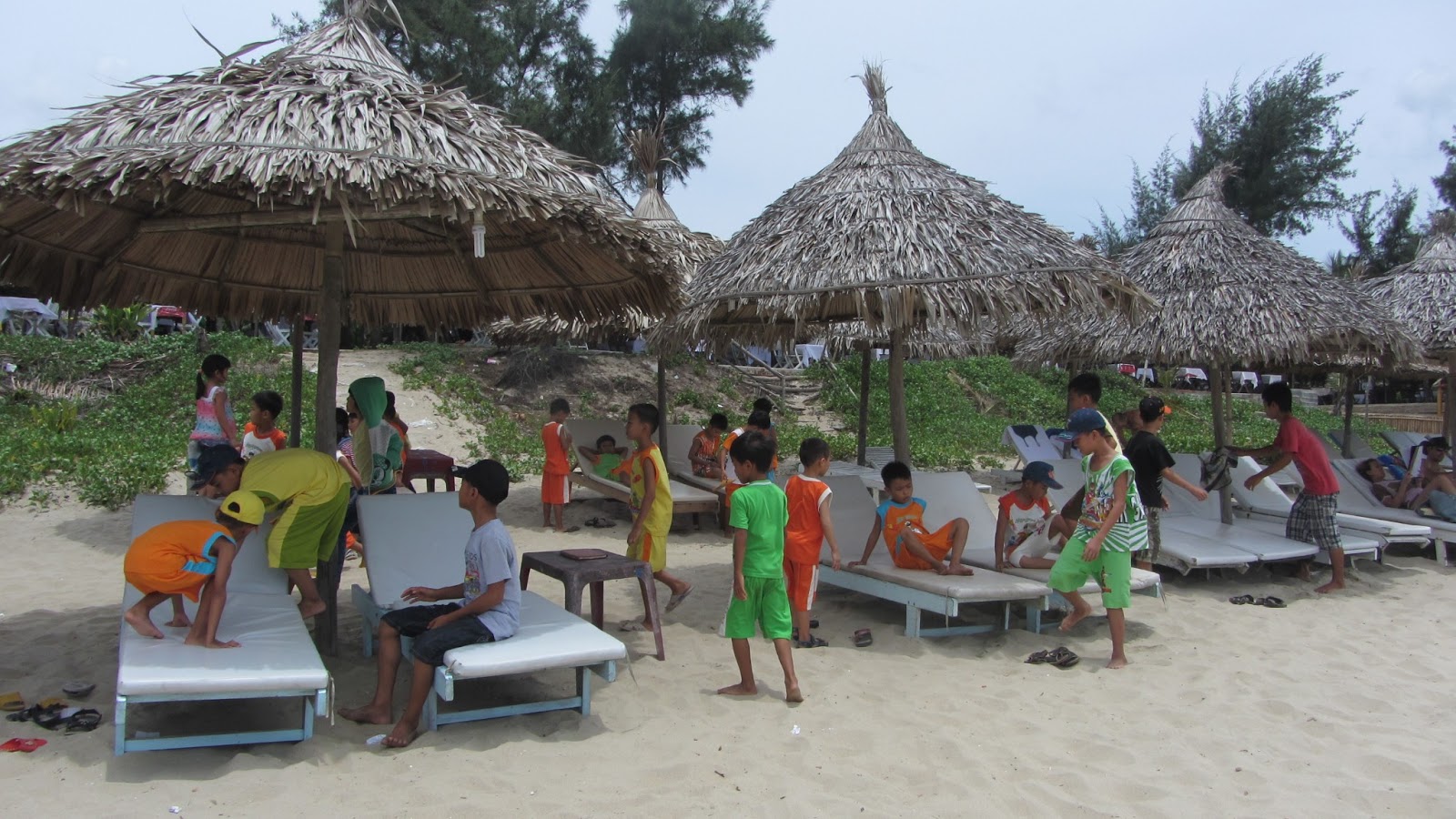 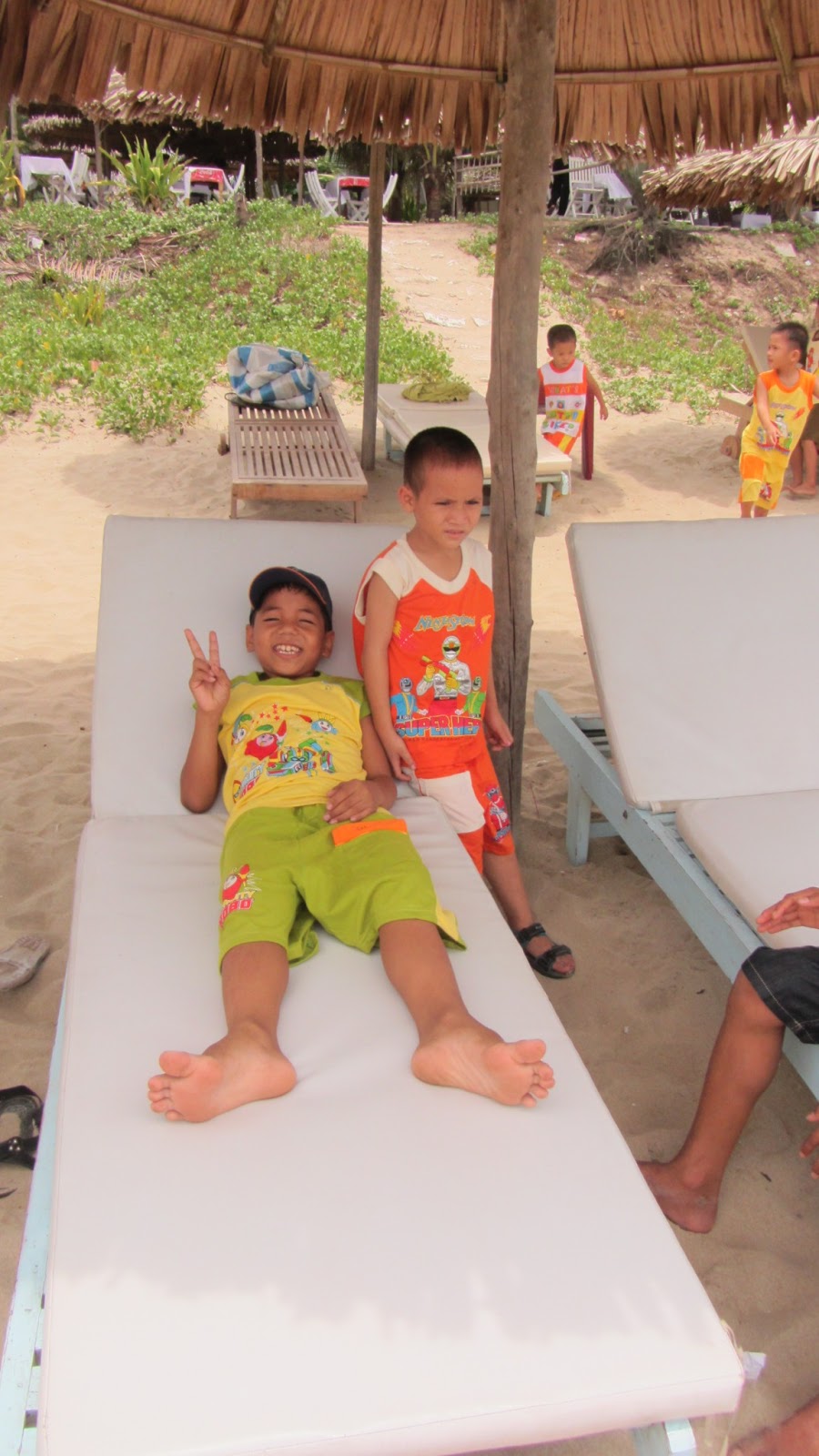 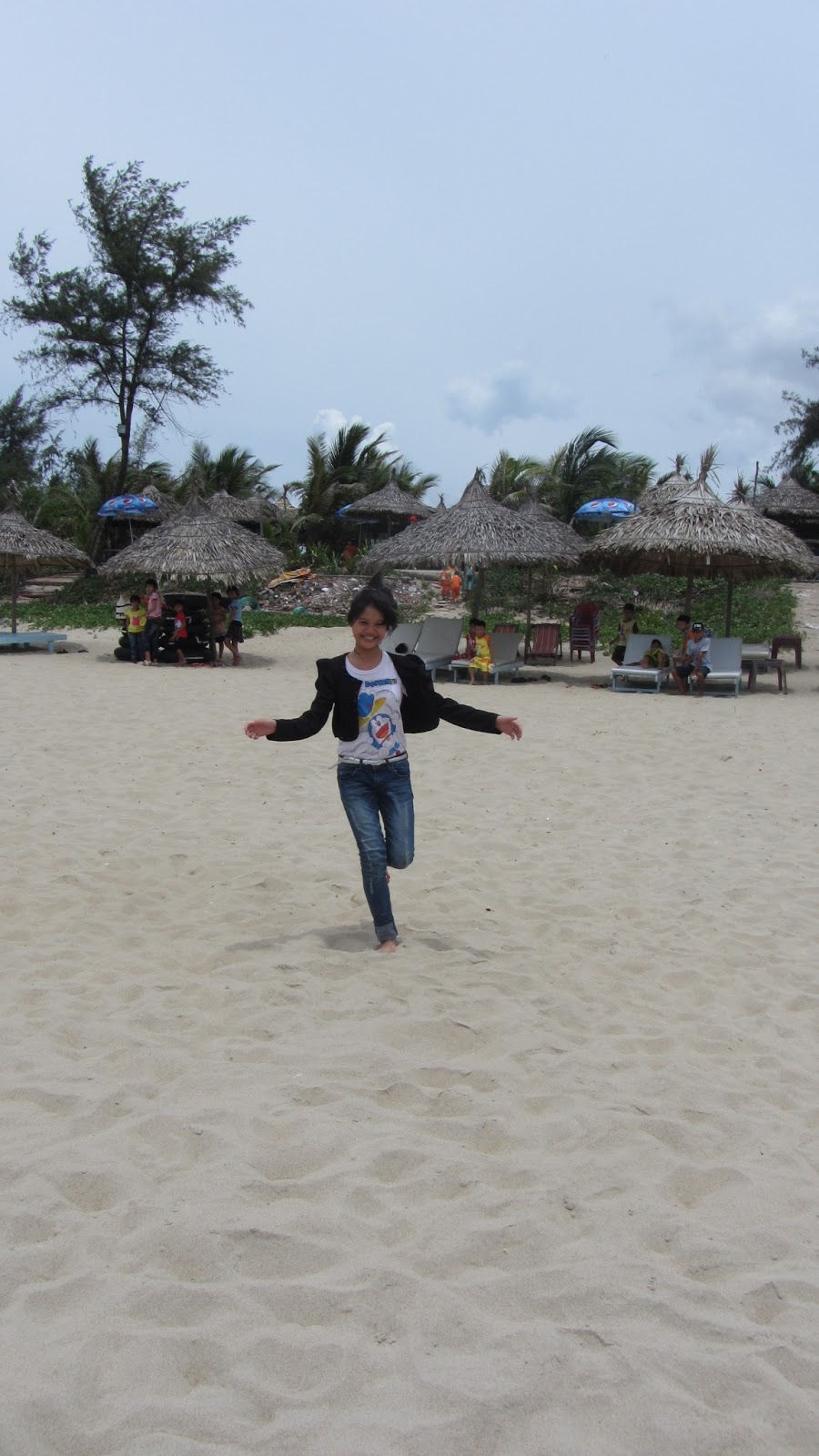 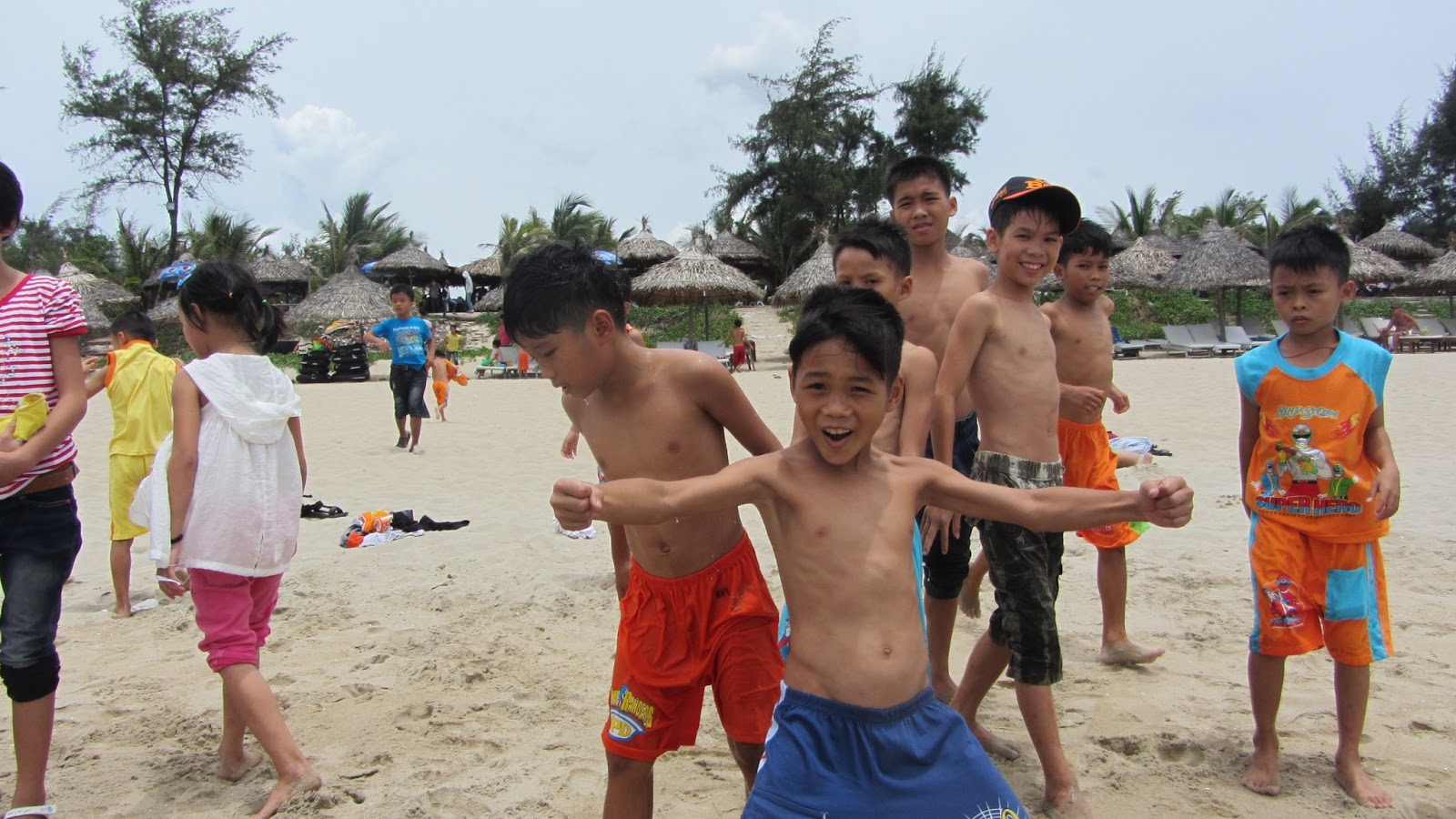 They ran like a herd under attack down to the sand. They played for a bit running enthusiastically despite the fact that it was 40 degrees and about 12pm!
So I went in for the kill again, using the heat as an excuse to go into the water and swim. They argued they didn't have spare clothes. I argued it was so hot they would dry by the time they finished lunch and desert.
I could see a few caving so I kept talking, pleading with them and promising that I will go into the water with Larry and Nhung and we won't let them go beyond their hip depth and can take ten at a time if that eased them.....
A few seconds of silence, carers looking at each other and talking animatedly before I got the head nods! YES!!! I did it! 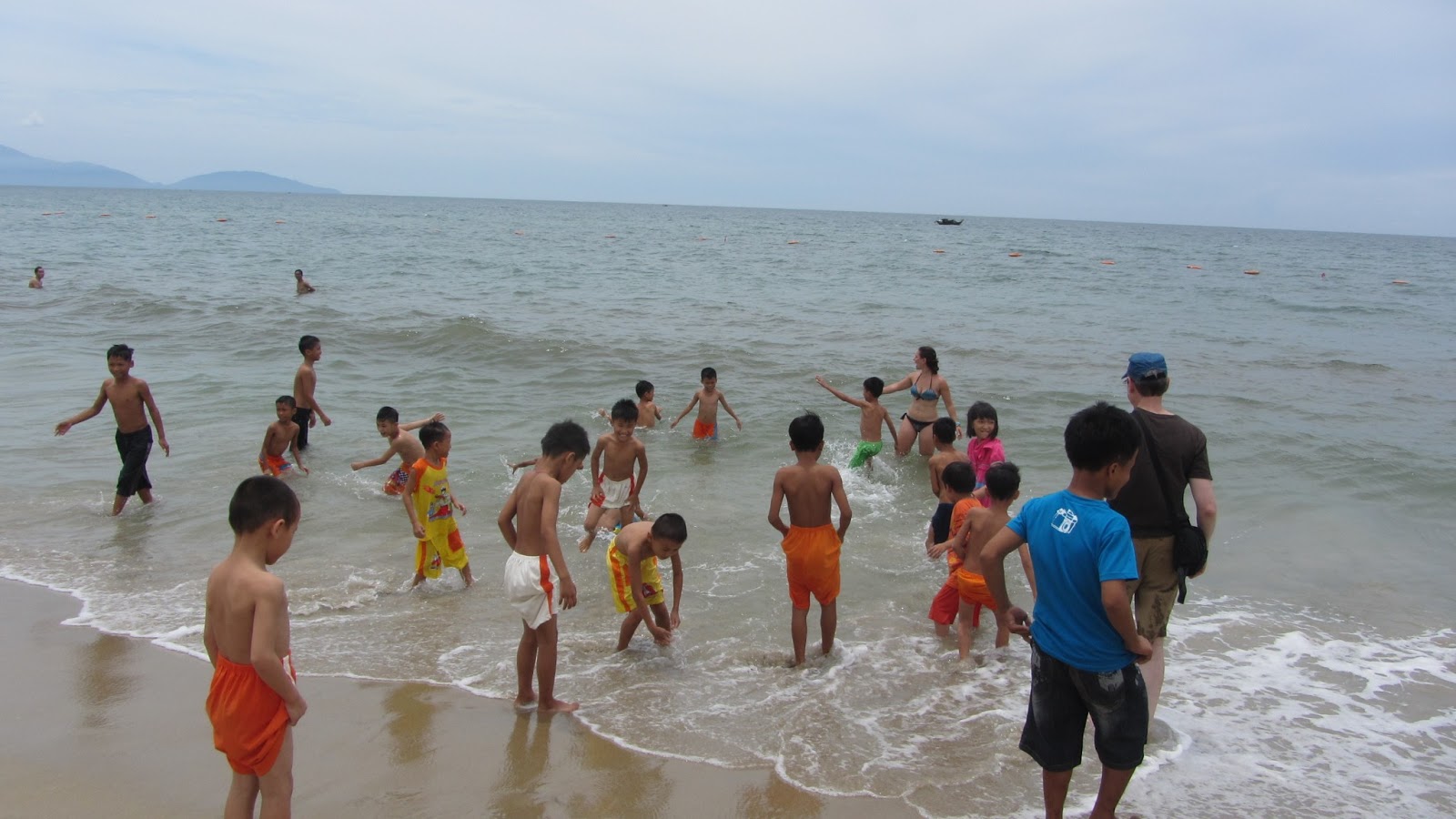 I knew the ten kids in at a time wouldn't work.... It's putting temptation right in front of them.... Like leaving a cake in front of a child and telling them not to eat it... They start with the edge and icing and......
First the toes went in, then the ankles.... I couldn't hold them back but it was all so fine.
Thy listened and stayed waist deep all in one area. 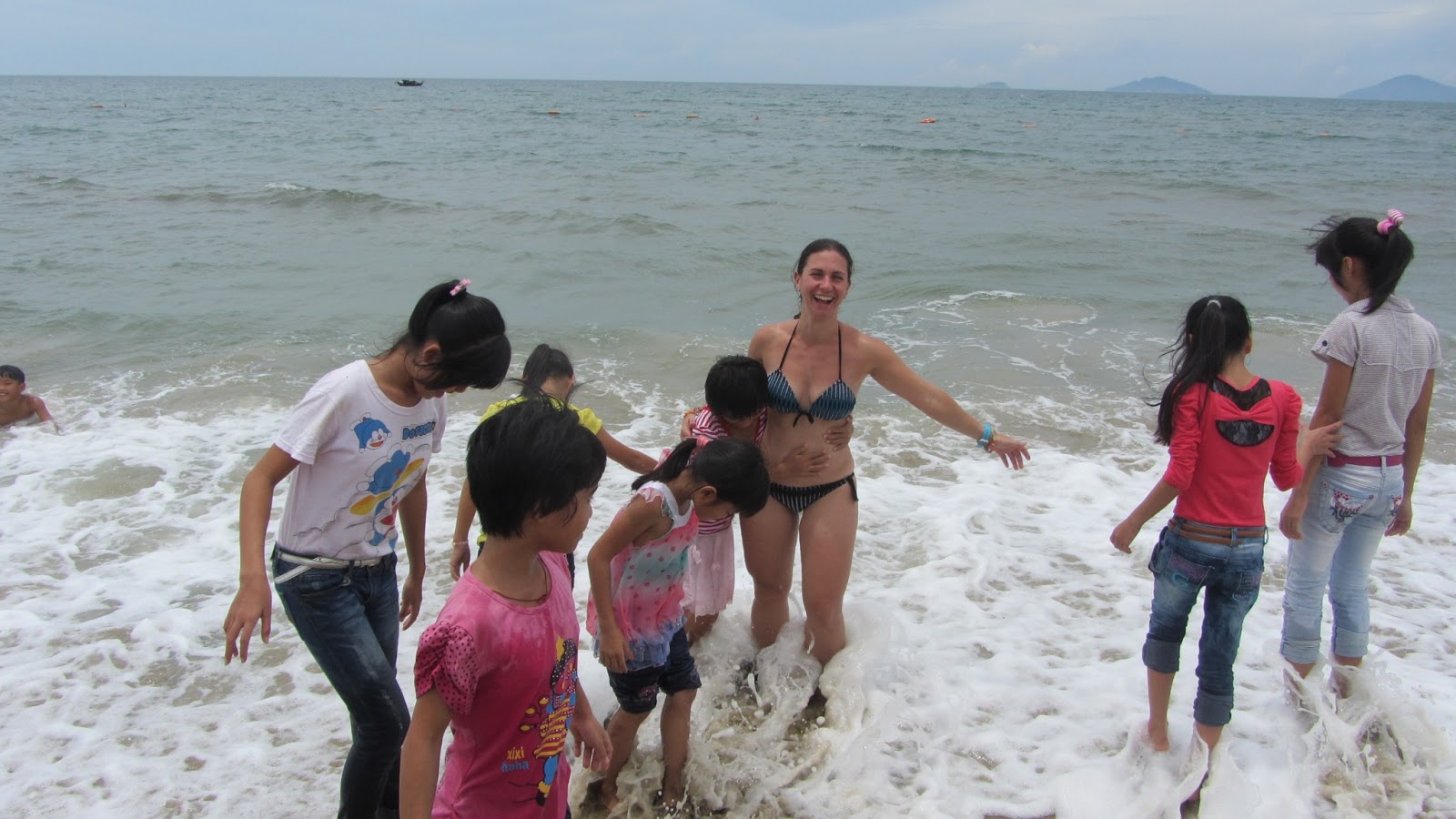 The ruckus they made! Half the beach was watching us, tourists were taking photos. I guess it was quite a sight...60 children, splashing about, making noise and just having fun.
The boys jumped straight in, no fear. The girls were scared and by the end of it, had only gone in up to their ankles.... A few of the younger ones were surprised when I told them to lick their palms. Moui? Salt? Yes I told them.... They couldn't quite understand why the water had salt in it.... Yet another example of something so small taken for granted: the knowledge that the ocean is salty. 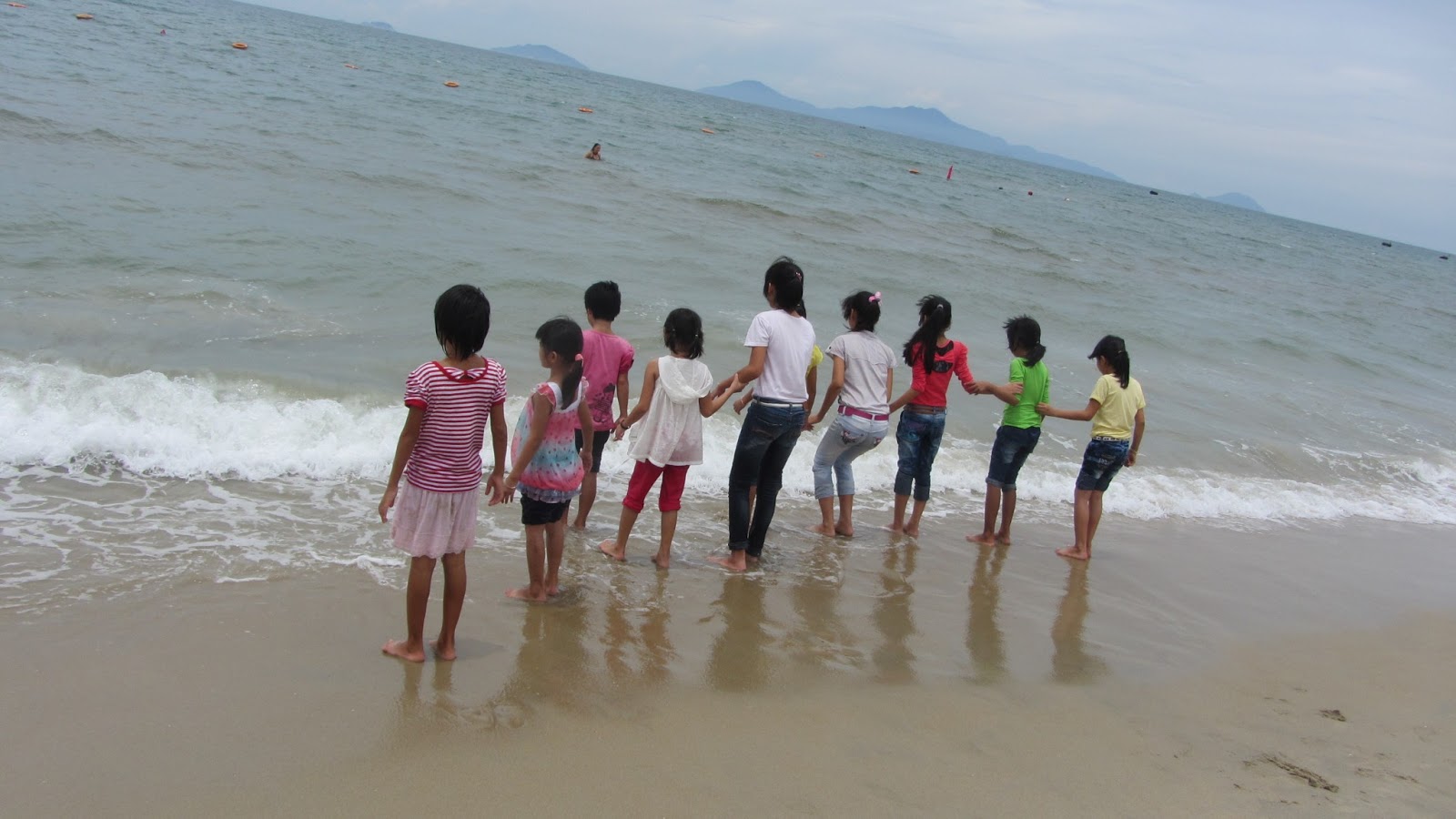 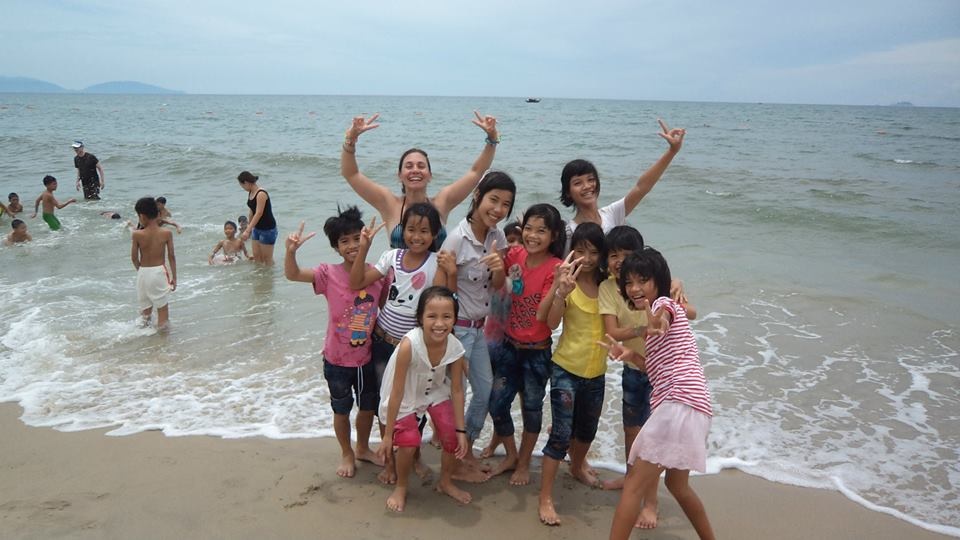 The carers ended up relaxing and were laughing and playing along too. I think me in a bikini caused a stir but I figured I was in hoi an where everyone was wearing a bikini so I would be ok.... Just watching a beach full of white people half naked was enough of an experience for the carers I reckon! 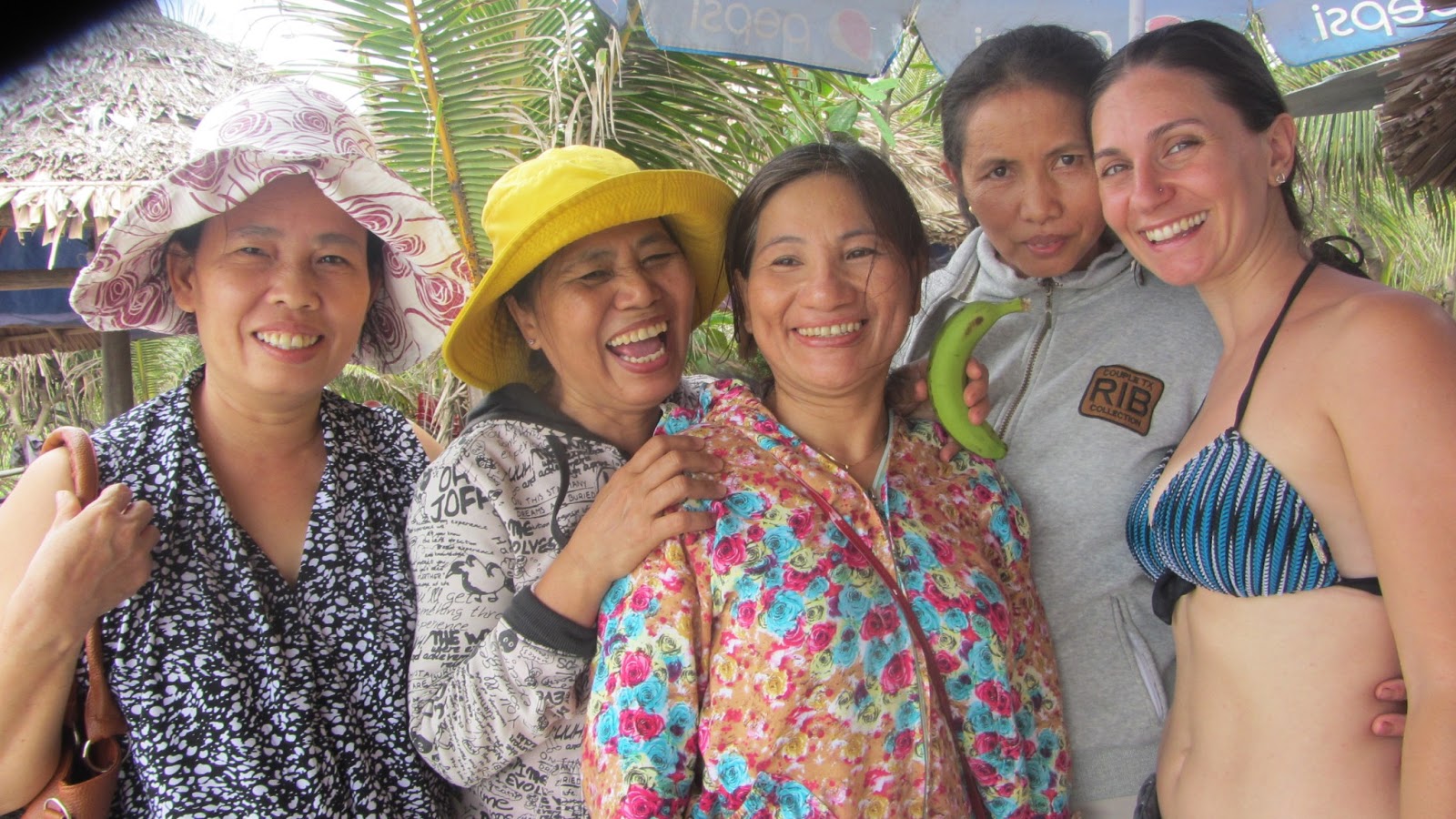 After a splash, we went back up, ate third course and then 80 amazing people sang happy birthday to me..... 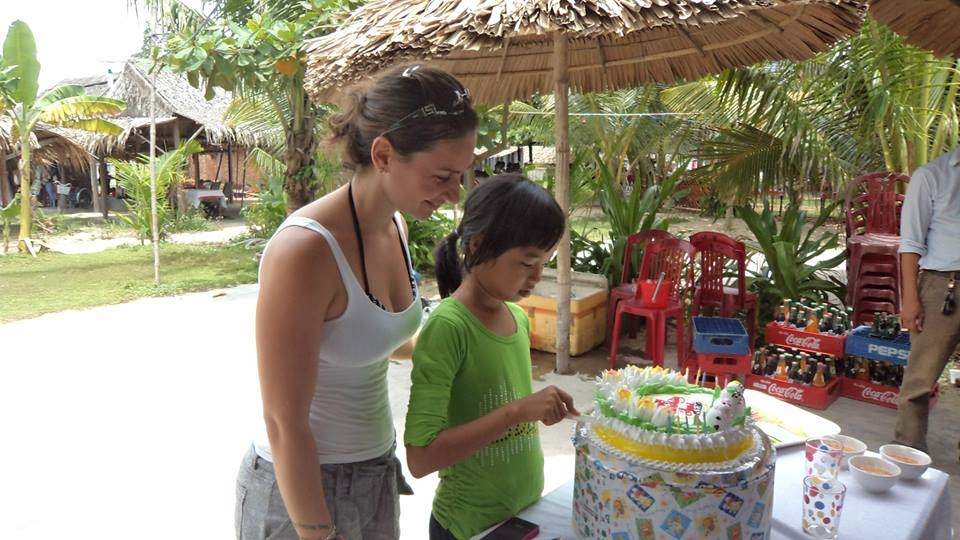 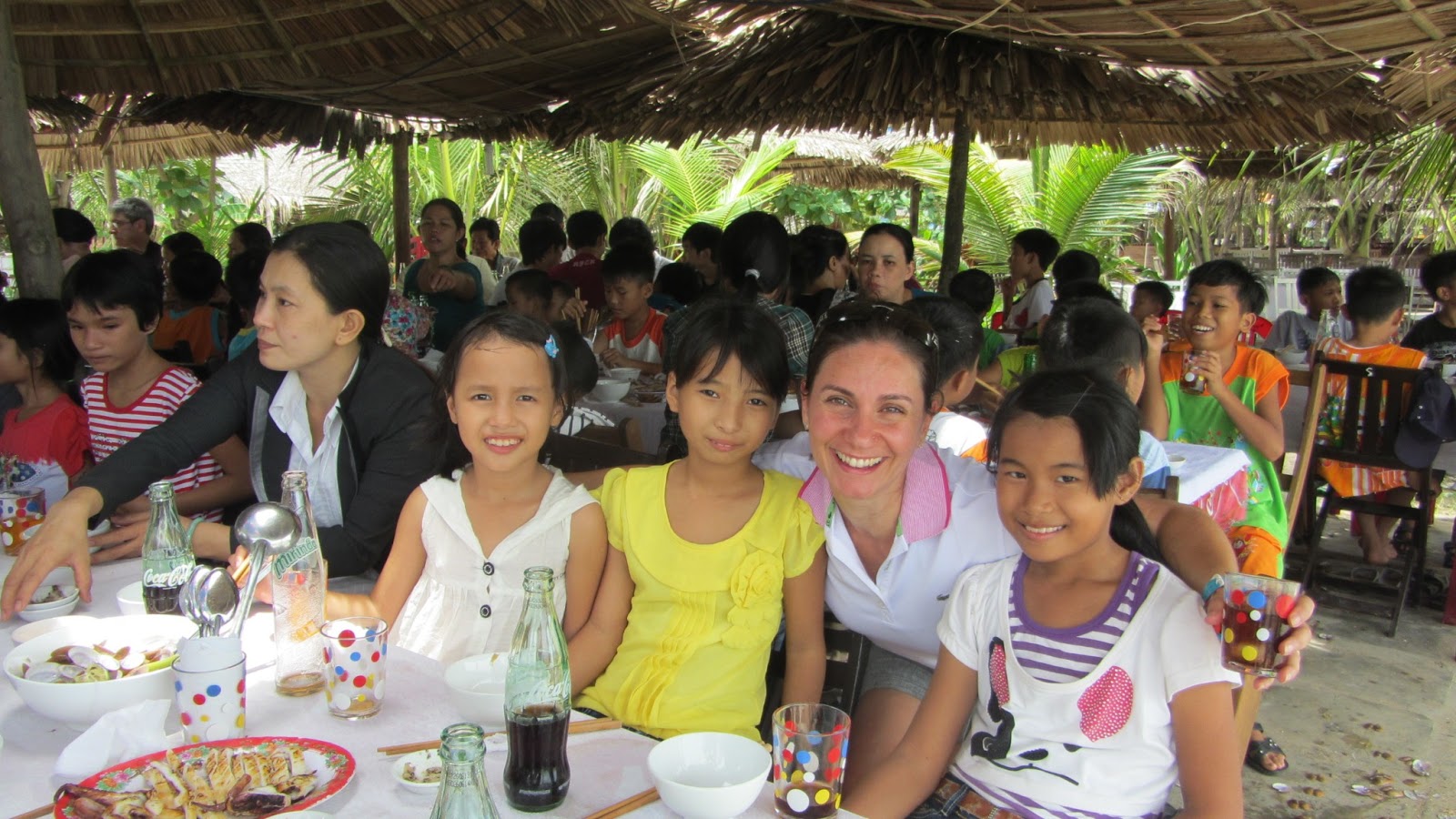 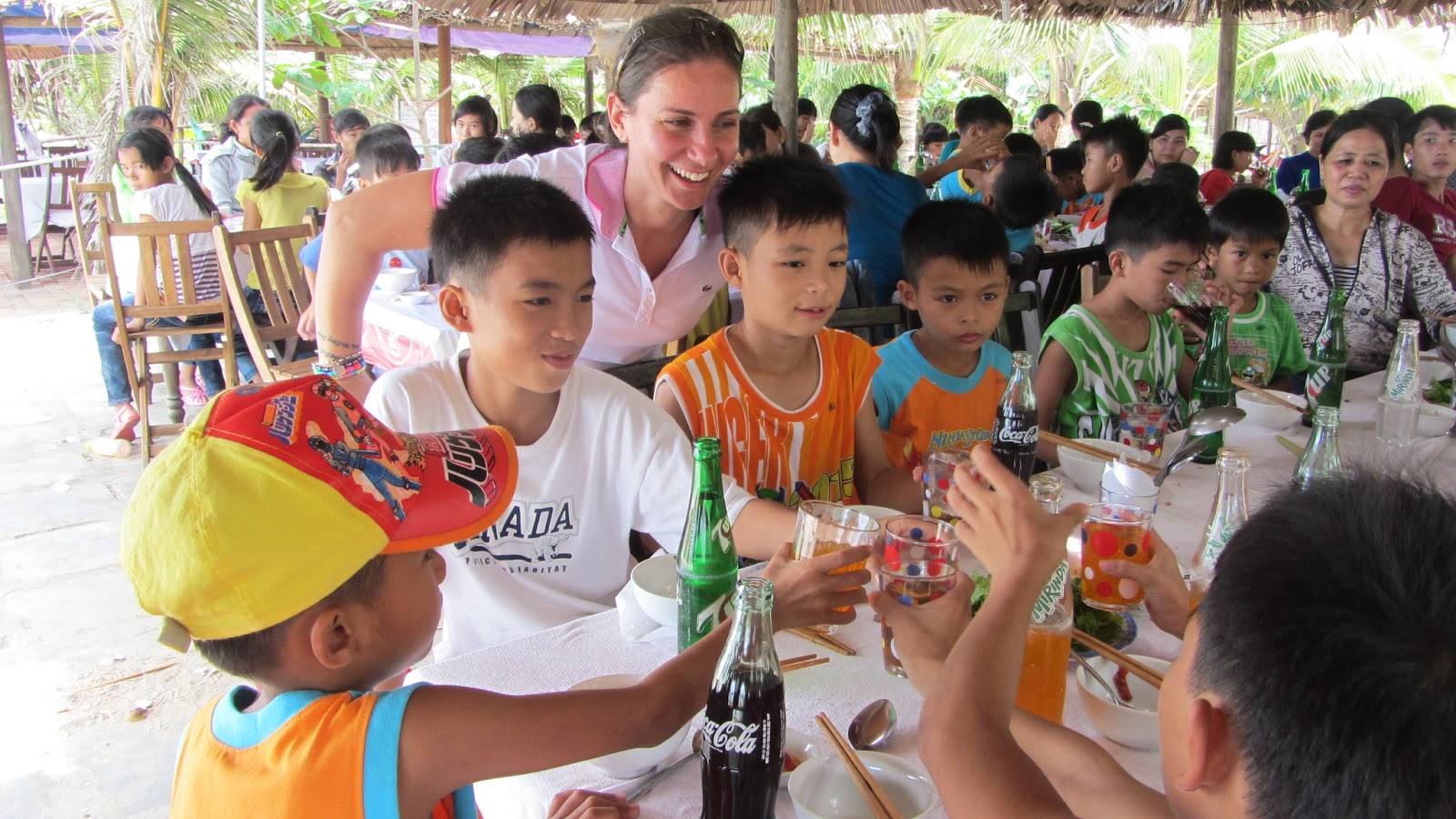 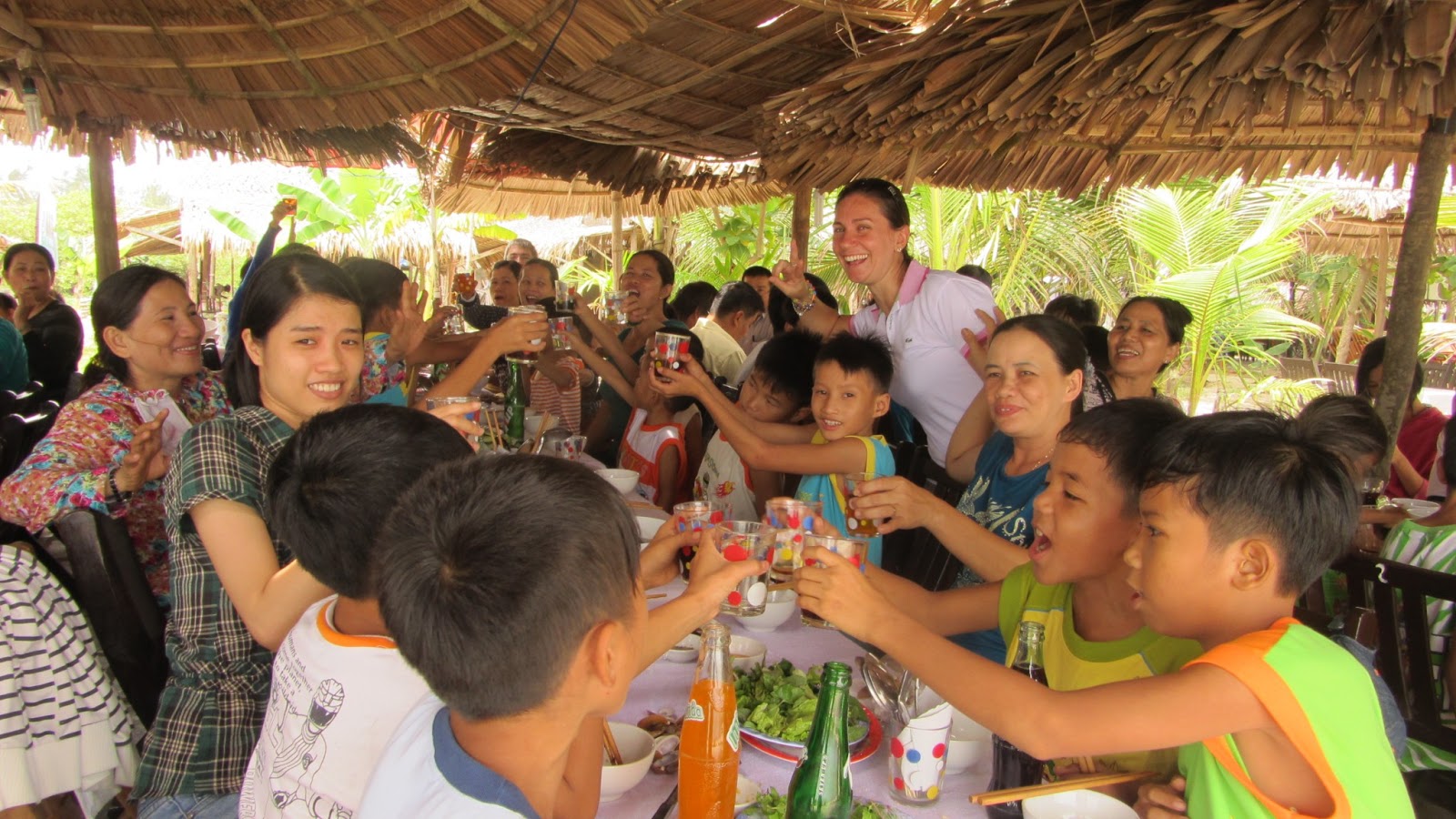 I was truly touched at all their gifts; the girls made me bead bracelets, 6 of the carers pulled money together and bought me a pair of sandals, orphanage made me a tshirt with their logo on it and a special message   printed on it for me too.... Mrs Hanh spoiled me, Nhung got me an anklet and a photo frame with a pic of us in it...... 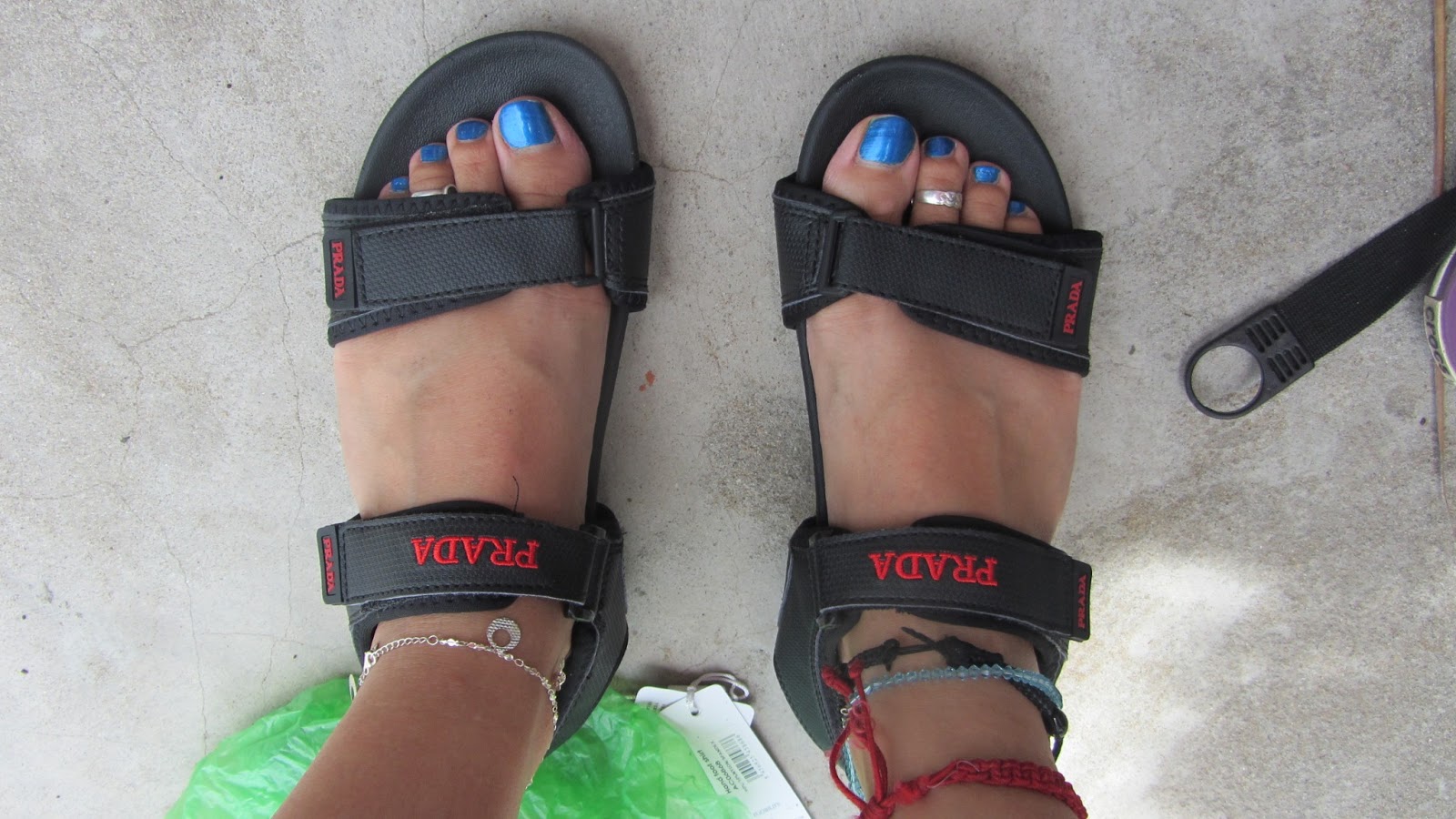 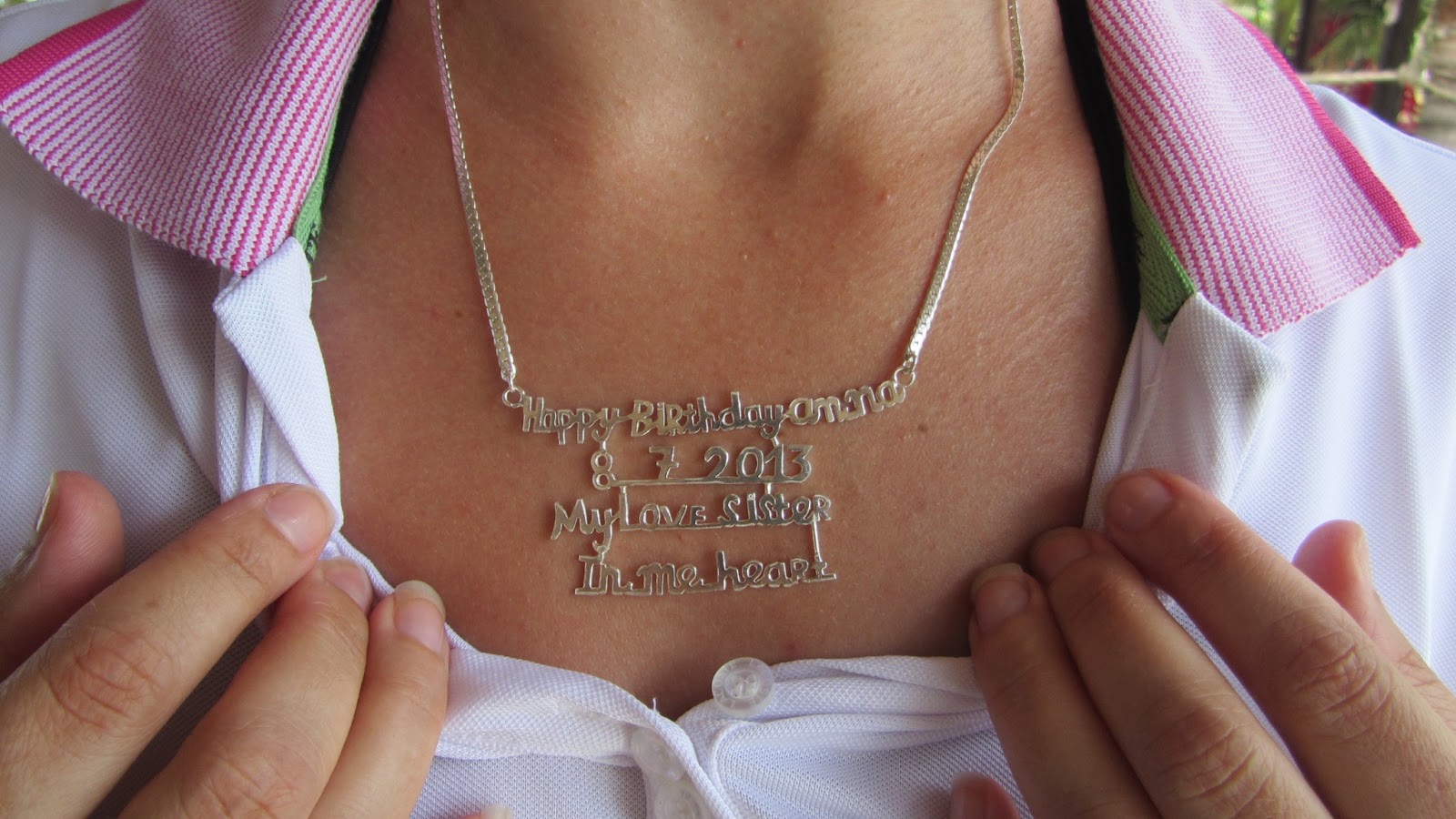 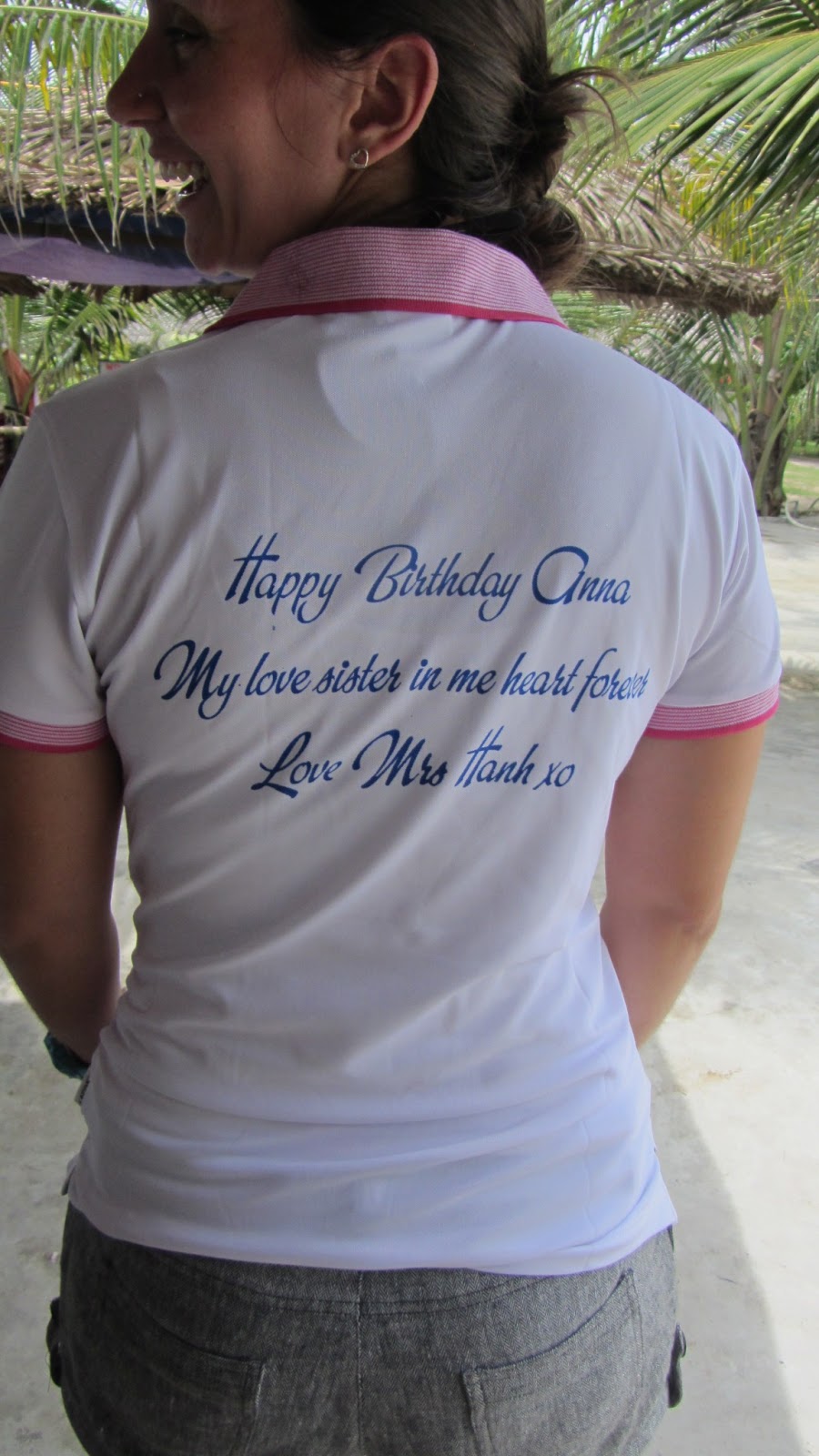 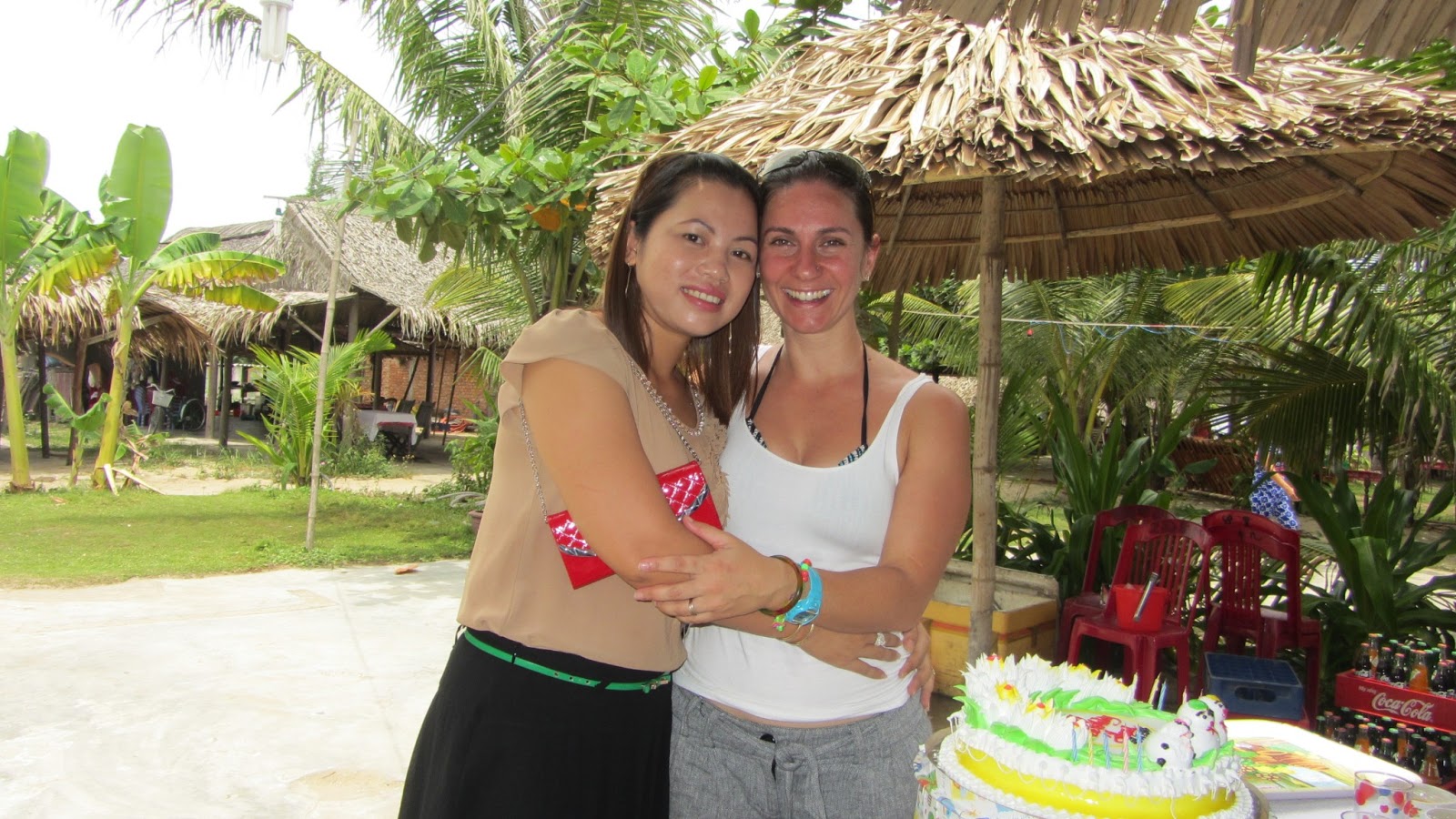 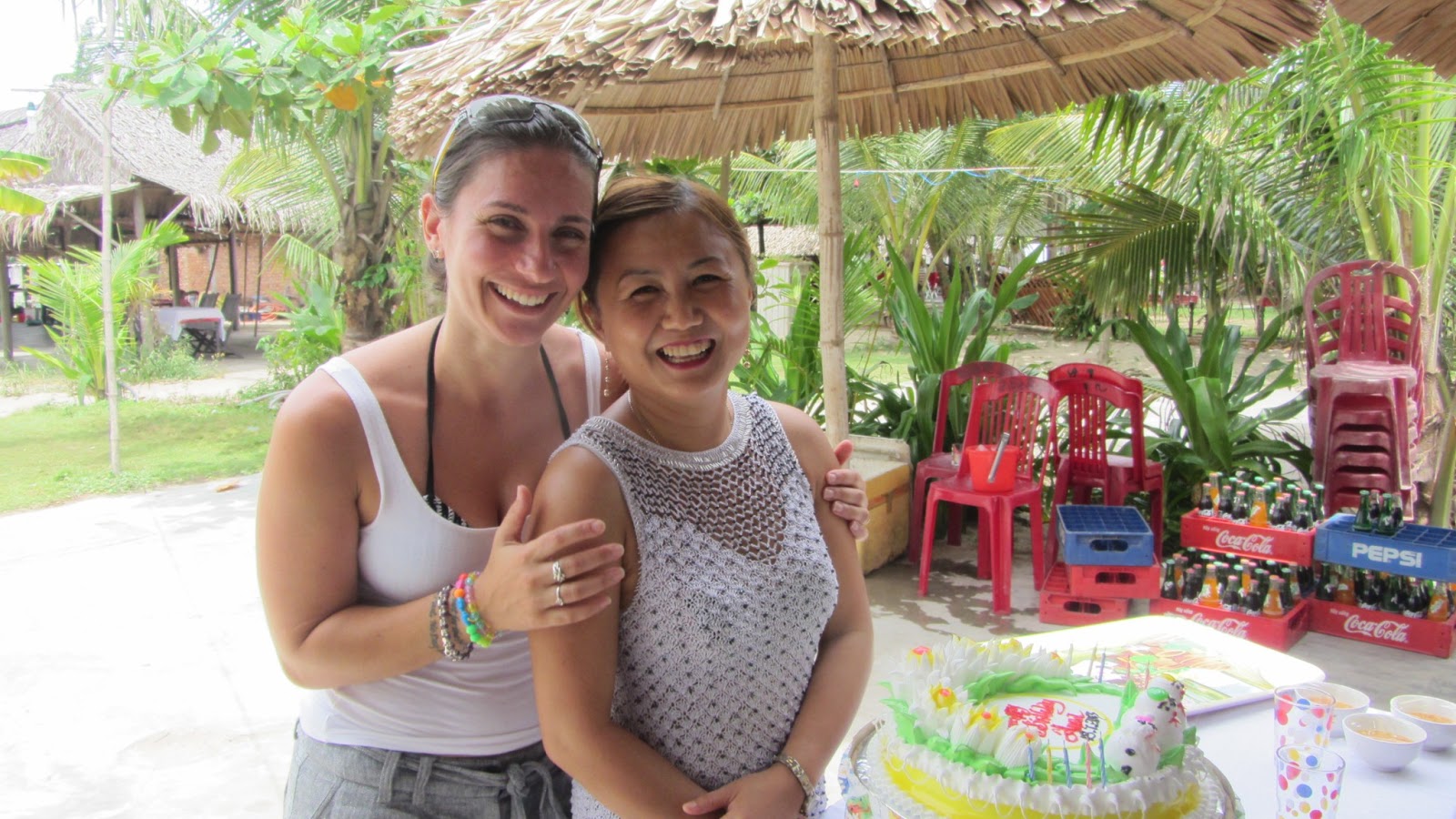 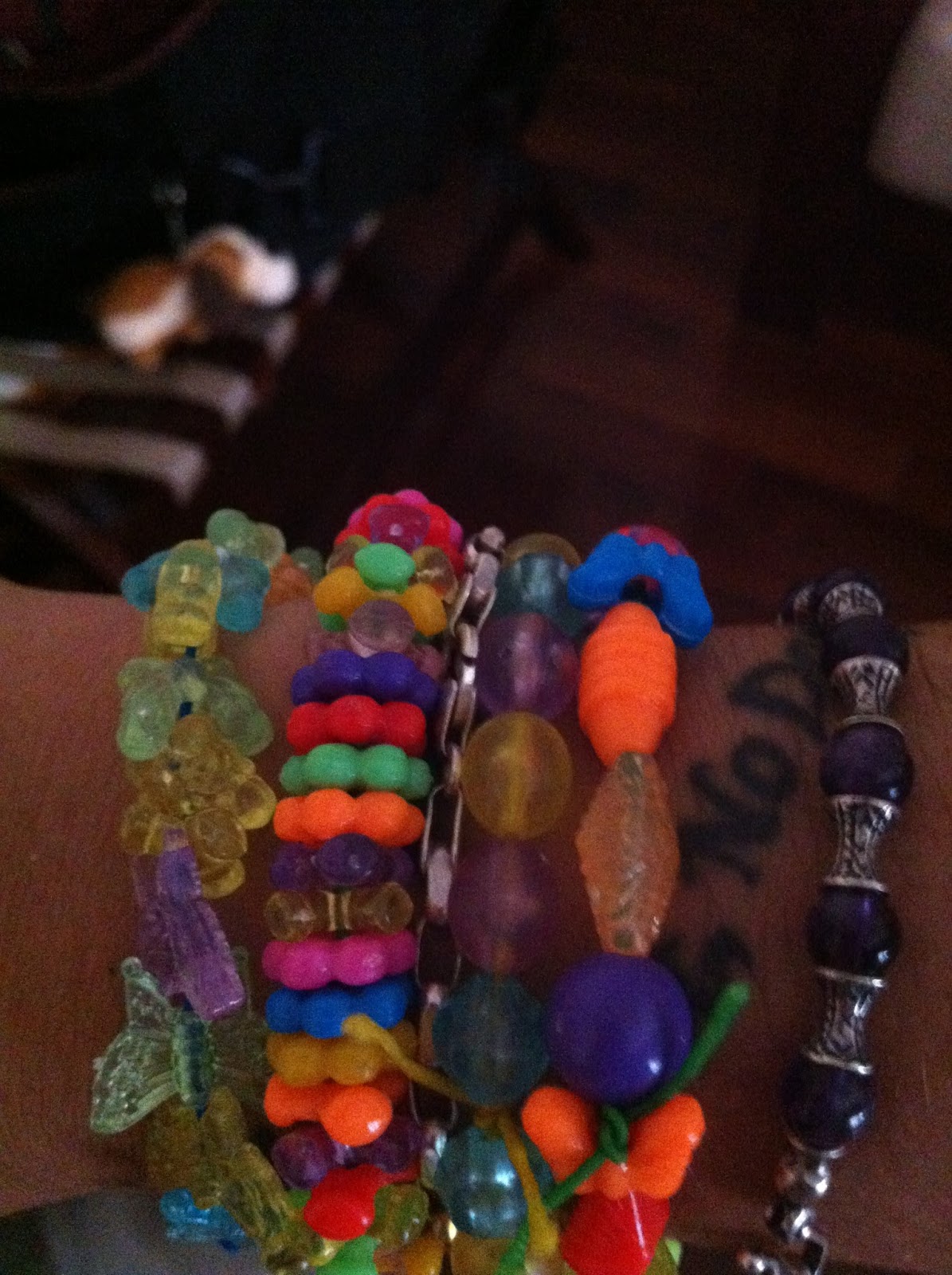 Amazing Amazing Amazing.
The tears began which set the girls off too. They said they wanted me to stay in Vietnam forever! Knowing that's not an option right now, I got many well wishes and hugs instead with final declarations of how much they love me and will miss me and a promise of my return. 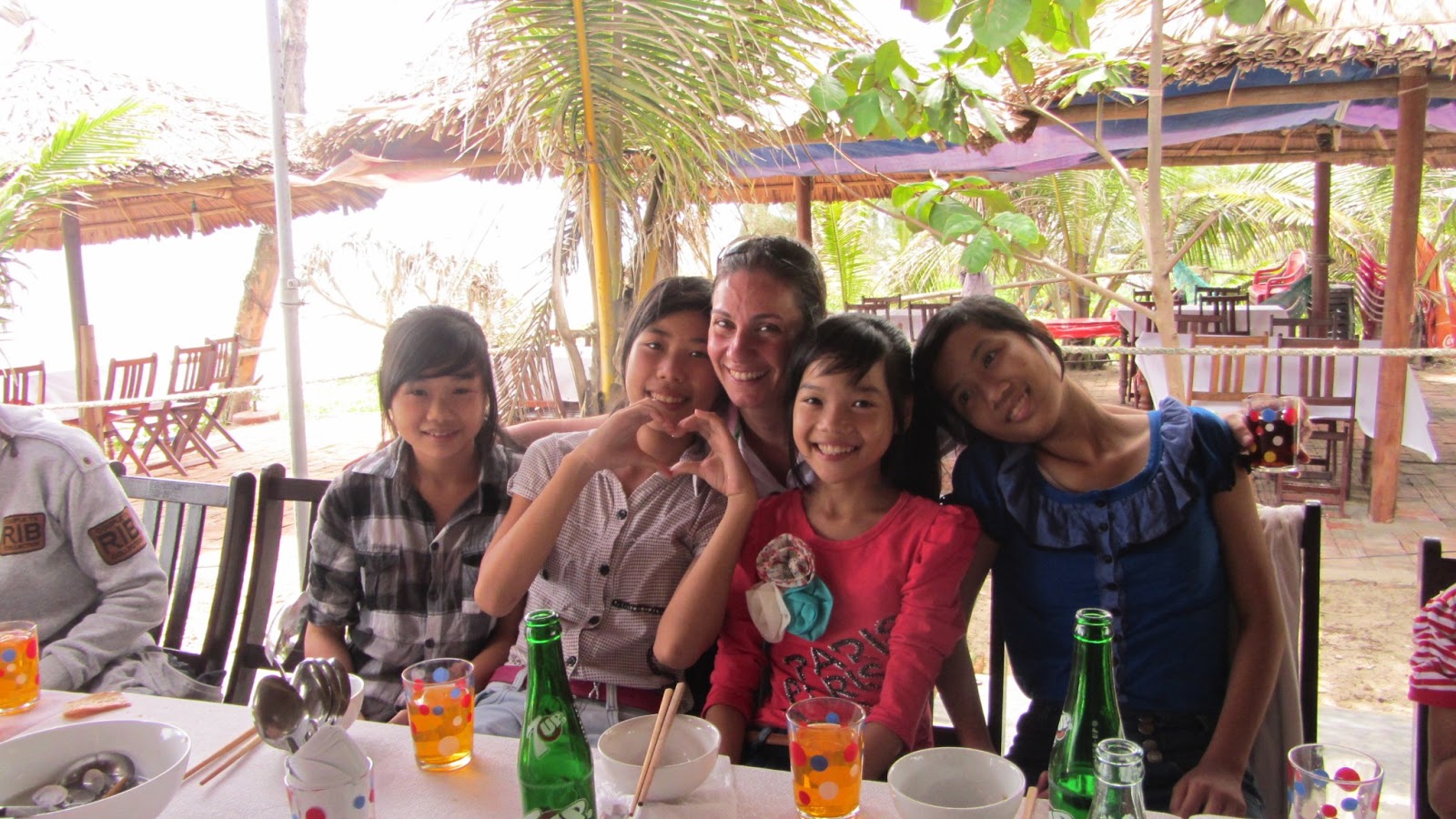 Posted by Anna LittleShoe at 9:21 PM