'Nothing ever becomes real until it is experienced'

First day in Vietnam and already I feel like I’ve been here for weeks. As we ride in the car from the airport through Da Nang city motorbikes swerve chaotically around us in an endless game of chicken. I don’t even blink. Even though I’ve only been here once before ( Dec 2012), the daredevil driving habits of the population seem to me like old news. As Anna and her friend Mark get reacquainted, I take in the sights and sounds of Vietnam. Babies fly by squished onto the back of motorbikes, street vendors shout their wares and anyone and everyone in half a mile radius, children run through the street barefoot, and through the crack in my window the scent of a million people living together in reaches my nose. 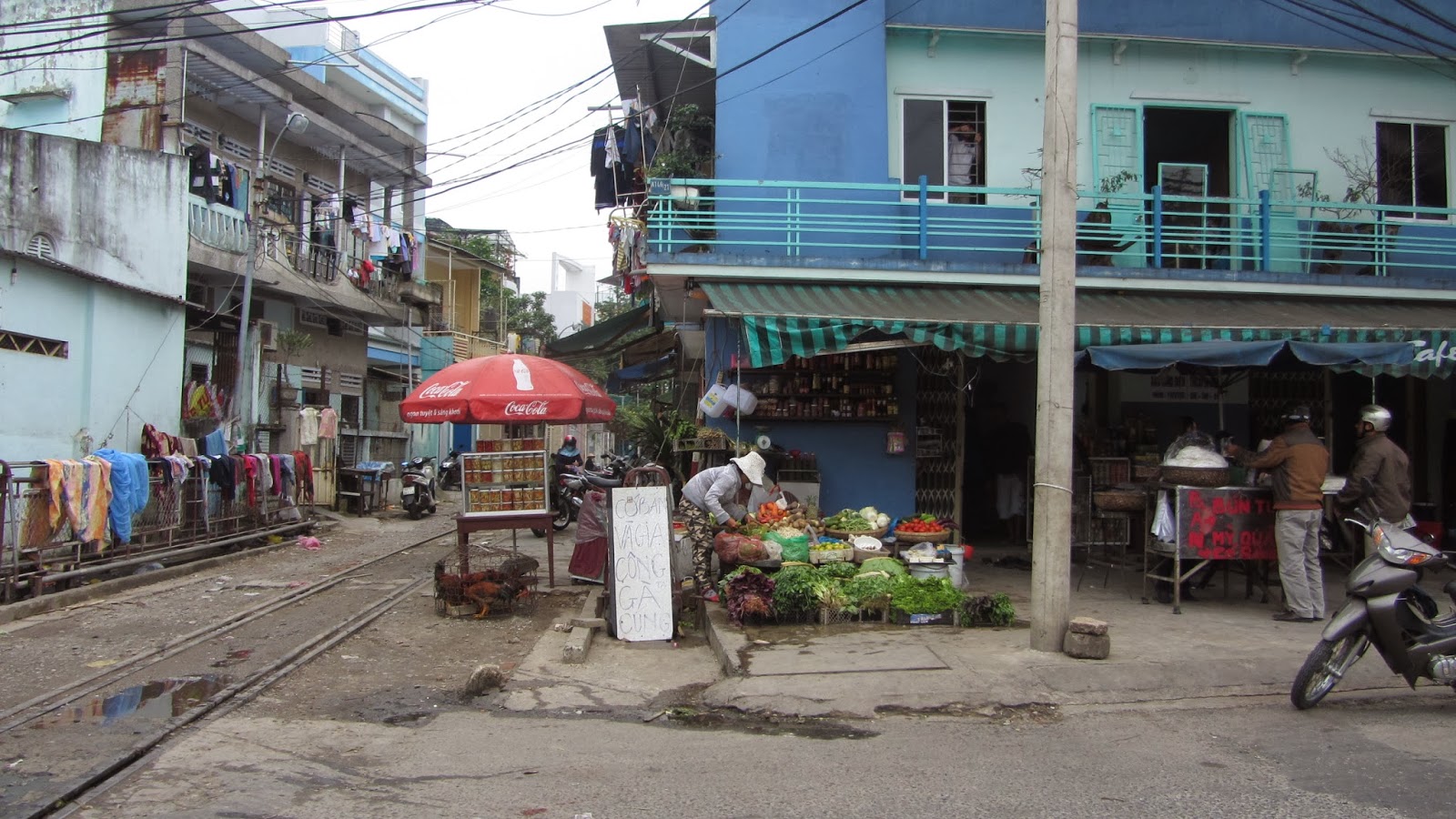 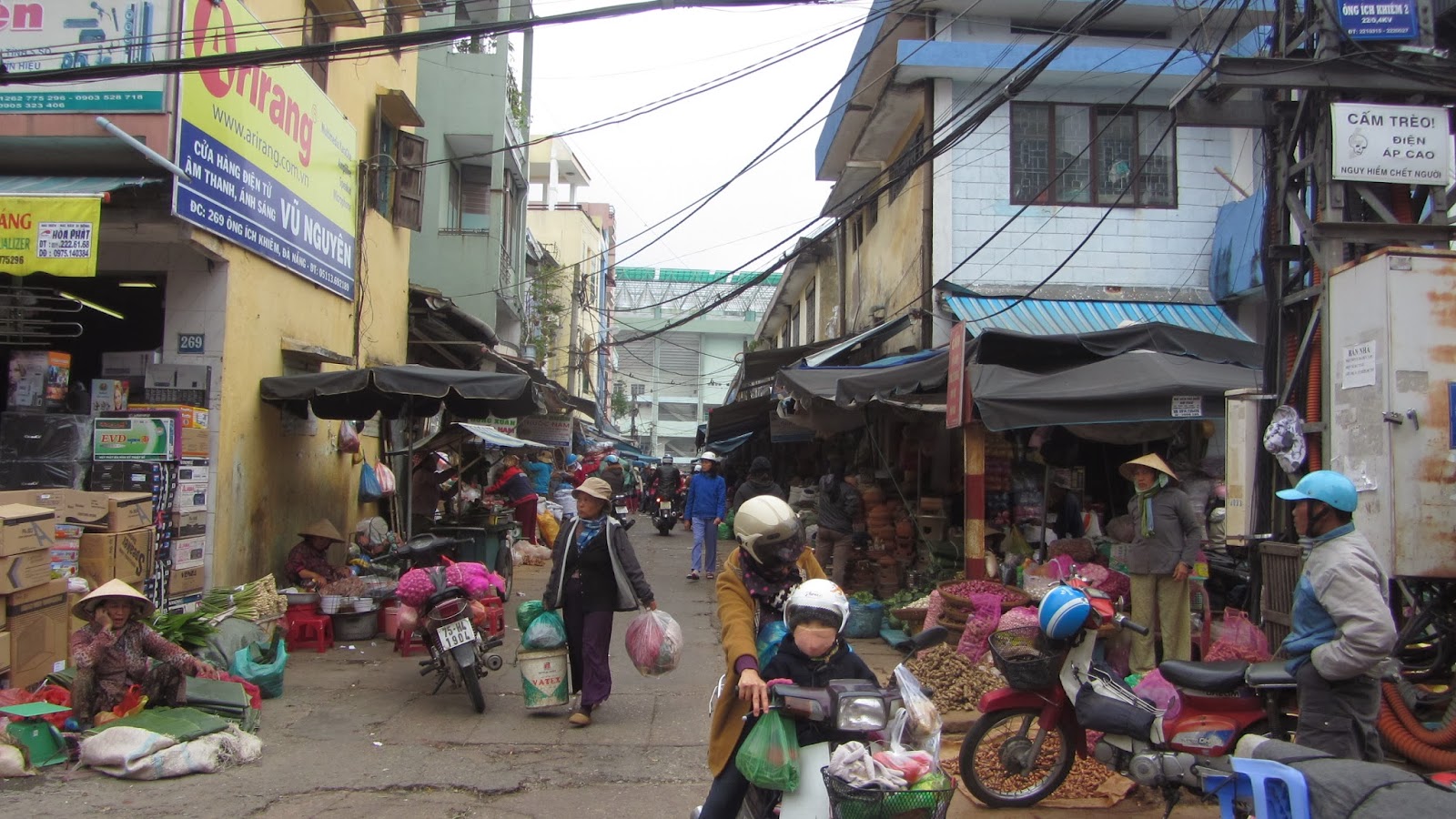 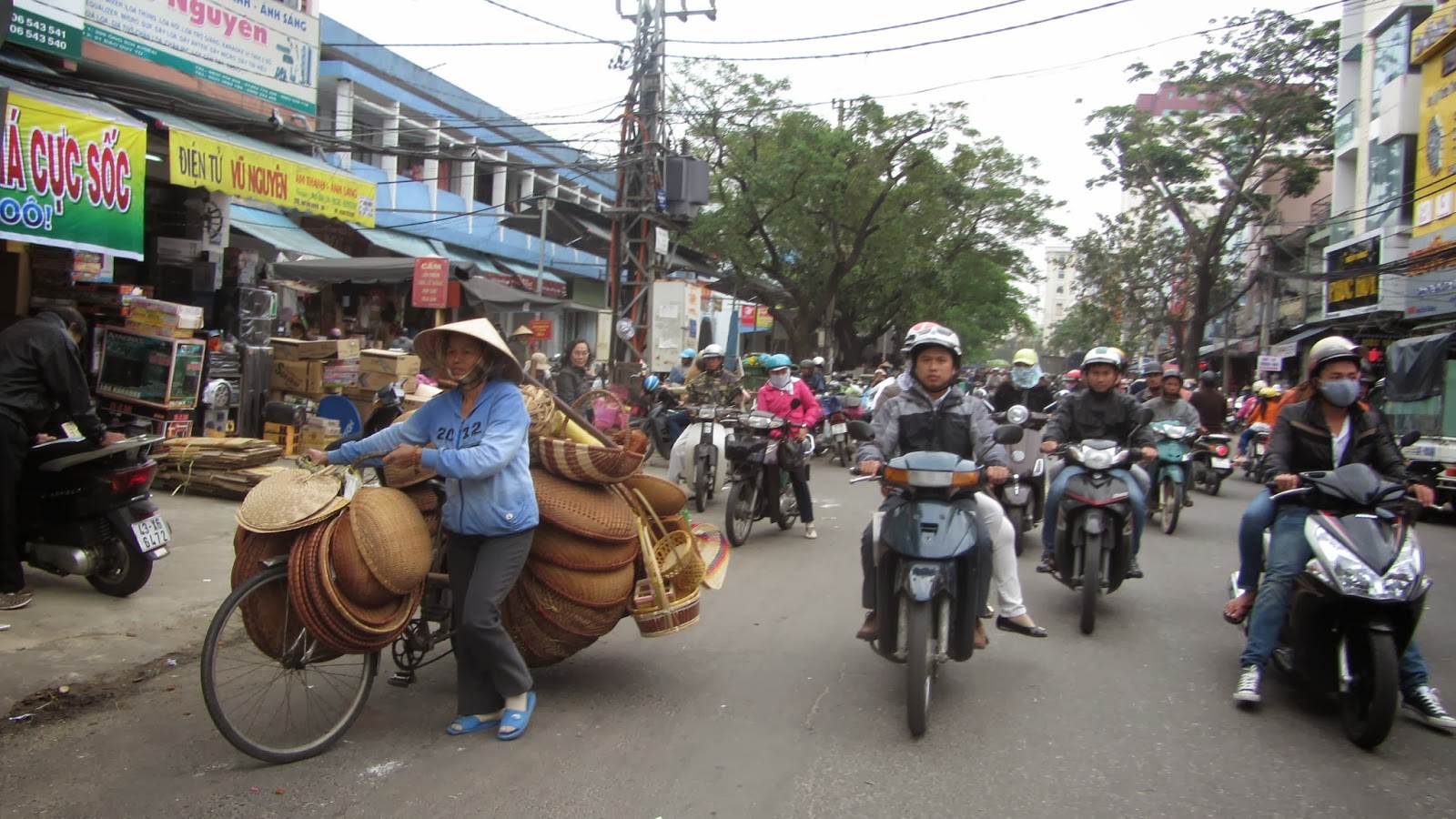 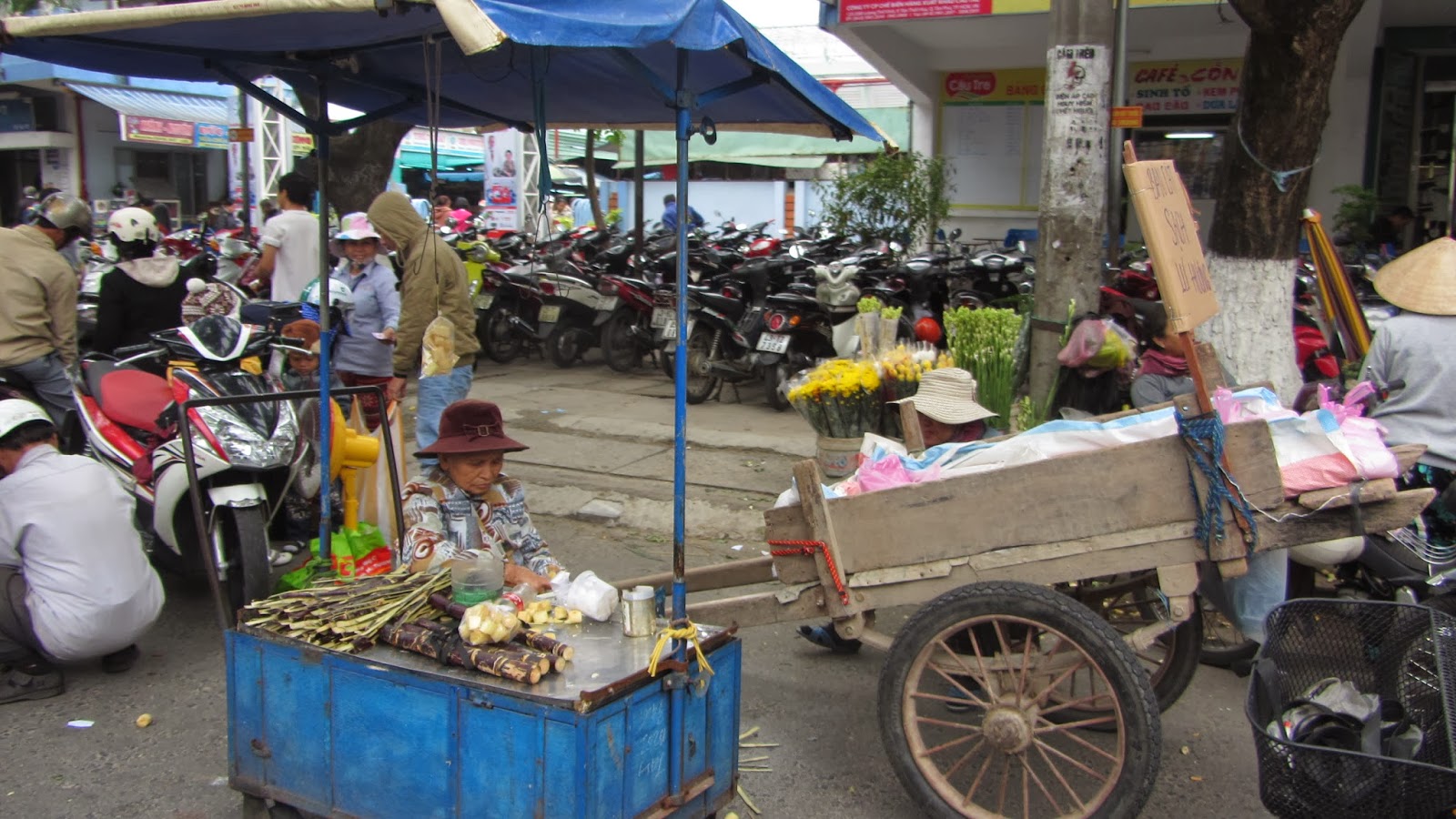 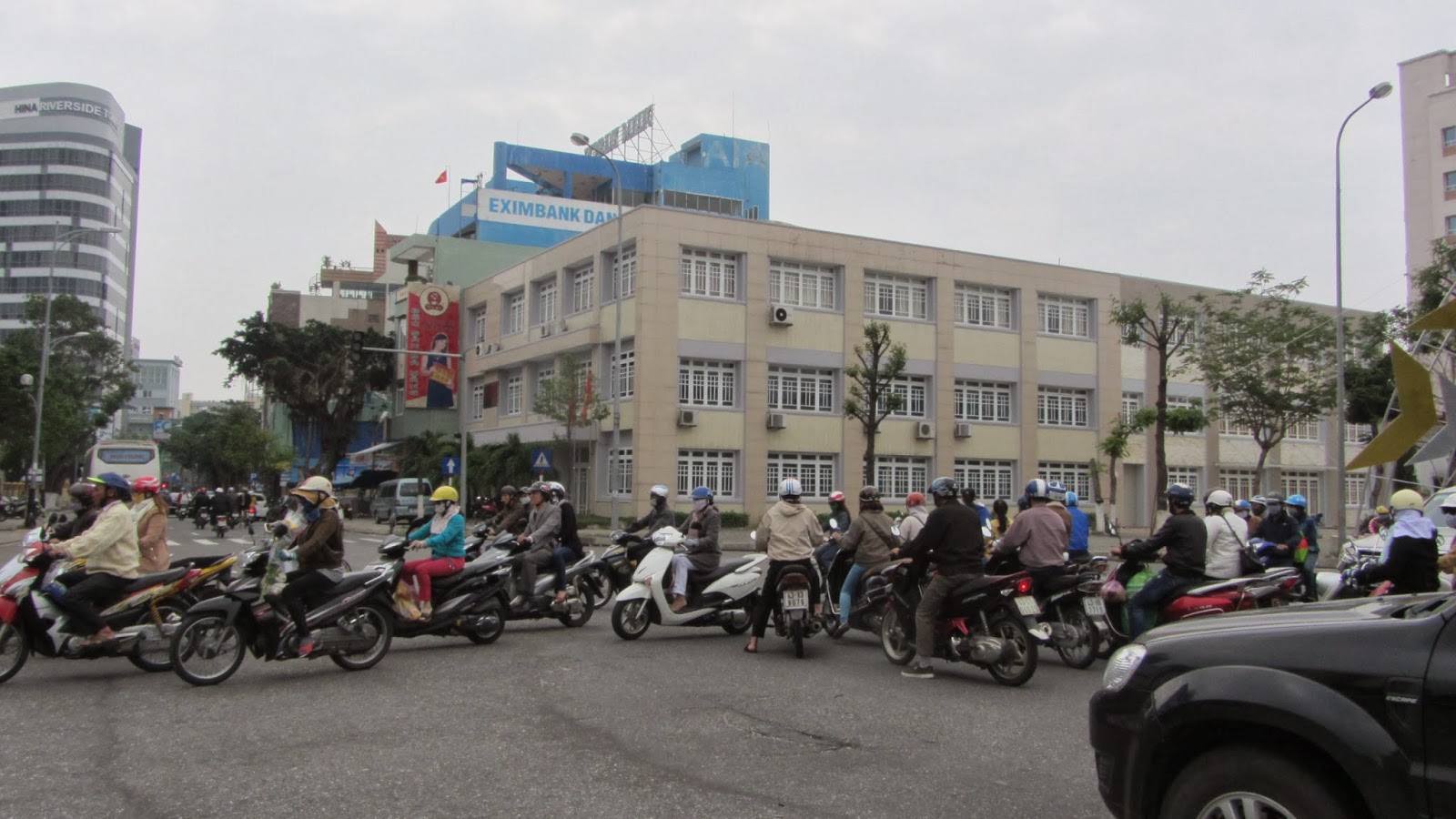 We are heading out for dinner to meet Mr Tuan and Mr Phuc, two local physiotherapists who cofound a volunteer program in Da Nang. Our destination; a place only described to me as Dirty Chicken. We pick up a mother/daughter volunteering duo along the way and finally make it to our destination.
We first glimpse our dinner being roasted over a street fire at one of many vendors on the street. There was nothing to distinguish it from all the countless other chicken vendors; however Anna assures me that this one is special. There are two things on the menu: wings... and feet. Thankfully we stuck with wings. Mr T and P arrived soon after us and after brief pleasantries we get down to serious discussion over delicious food. 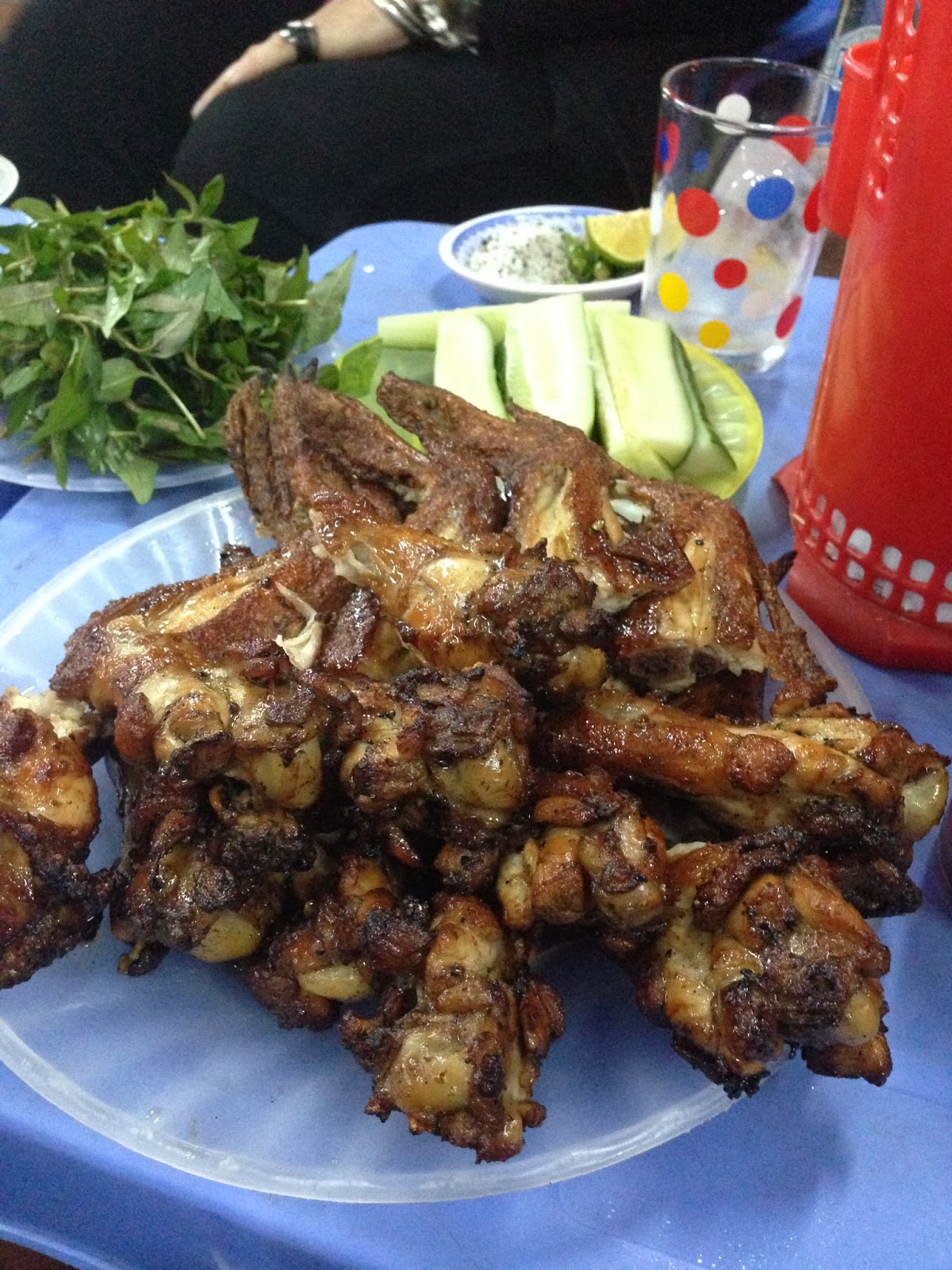 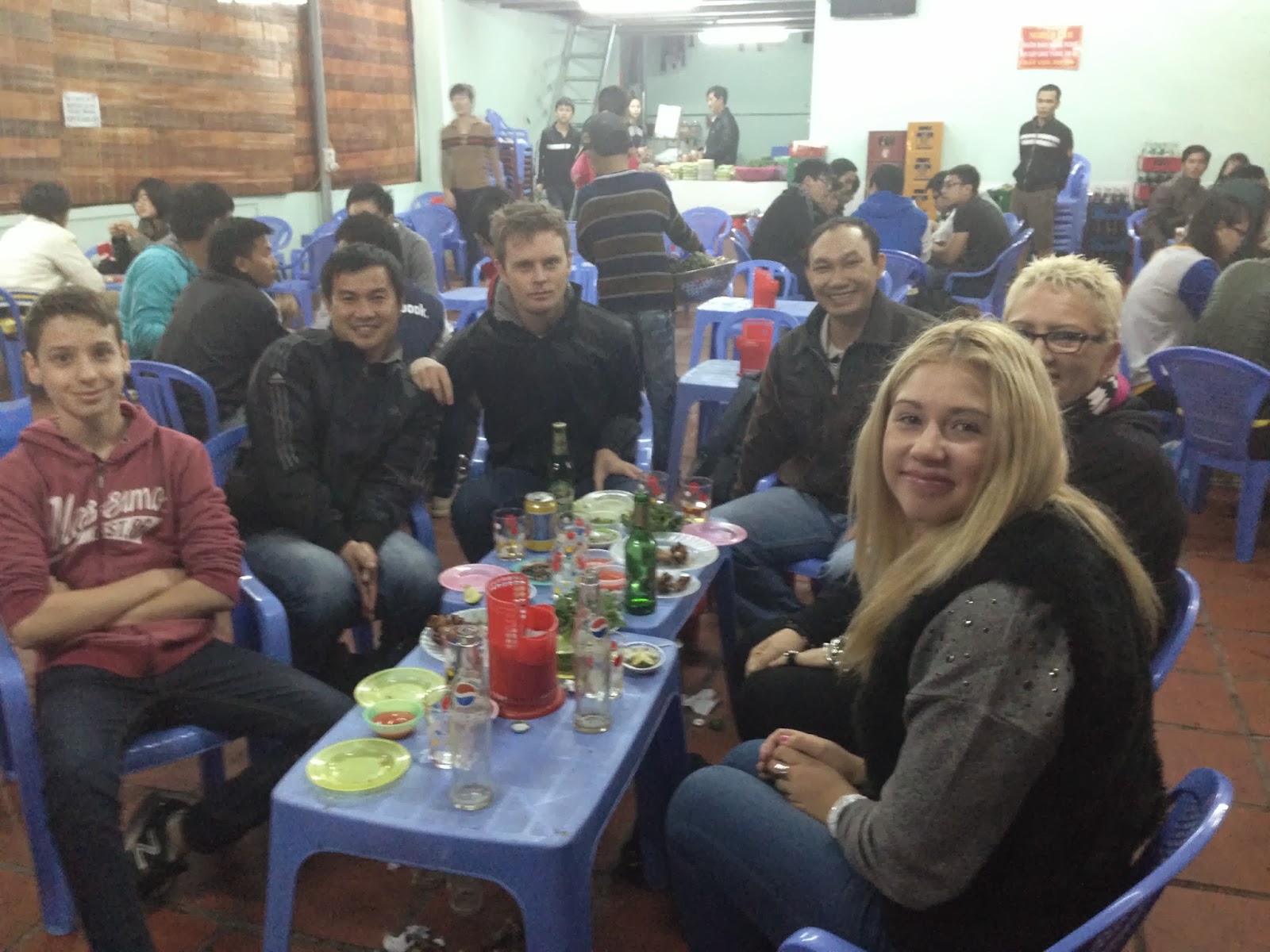 After waking up at stupid o’clock in the morning, we take a taxi to the Red Cross orphanage that Mr T and Mr P are working at that morning. As we walk in we see an elderly man playing with the kids, a massive grin upon his face. He introduces himself to us as Alan, and as we continue inside he resumes interacting with the young children in his care. From the very beginning I developed a large amount of respect and even awe when regarding Alan. To still be giving back to the world and caring for others in the way I observed him care for the Children at Red Cross was astounding and inspiring. Here was a man who knew what is important in life, and wasn’t going to let anything stop him from achieving his goals. 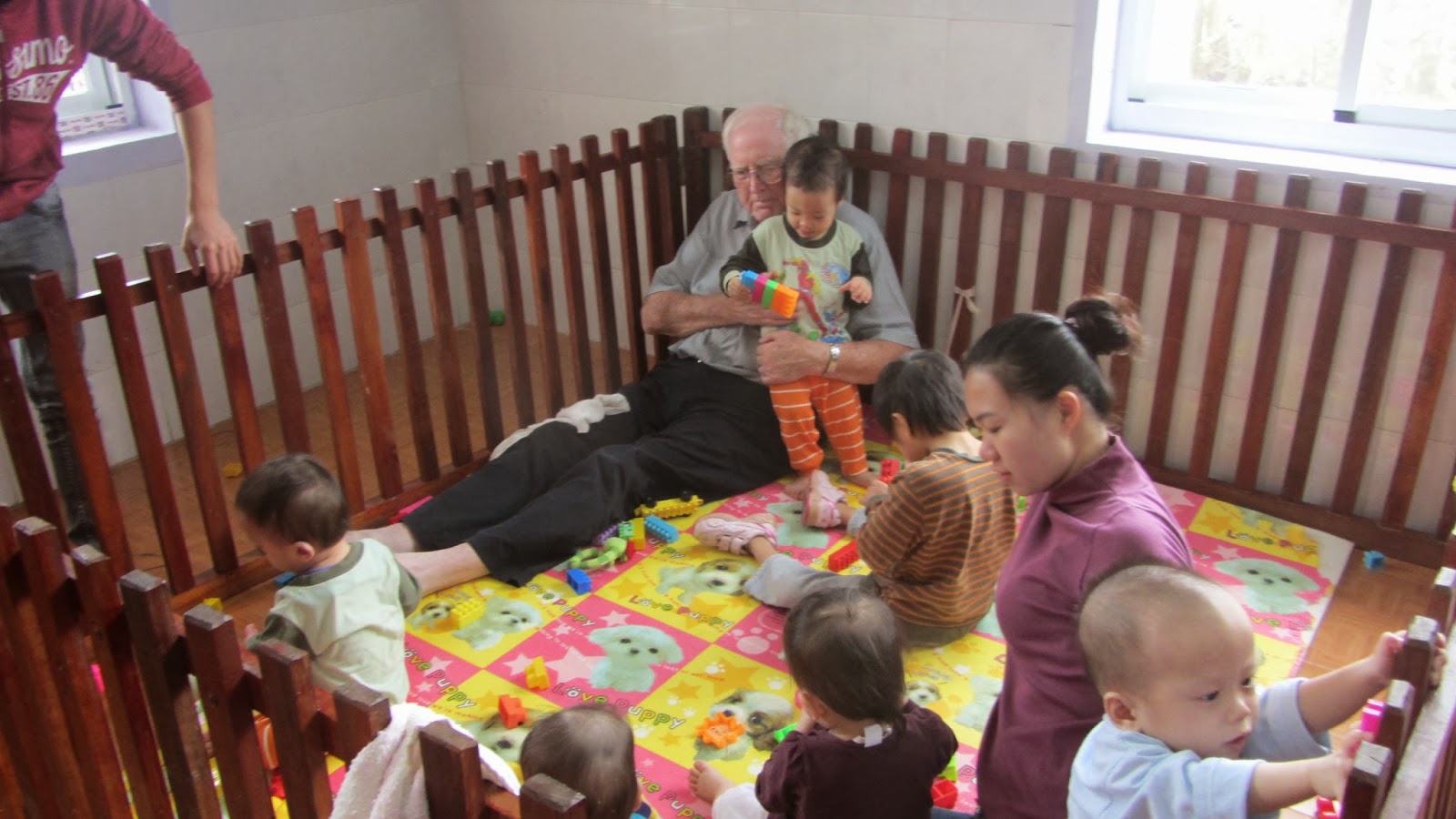 We found Mr T and P who showed us around. The main room: A wooden enclosure filled with noisy babies and toddlers playing with building blocks. A TV blares Vietnamese programming from the wall above it. Harsh metal cots litter the room with kids staring out from within.
The next room is smaller but has no lack of occupants. Cots line the walls containing kids in various states of health. Most of the children seem perfectly fine, if not frustrated out of sheer boredom. 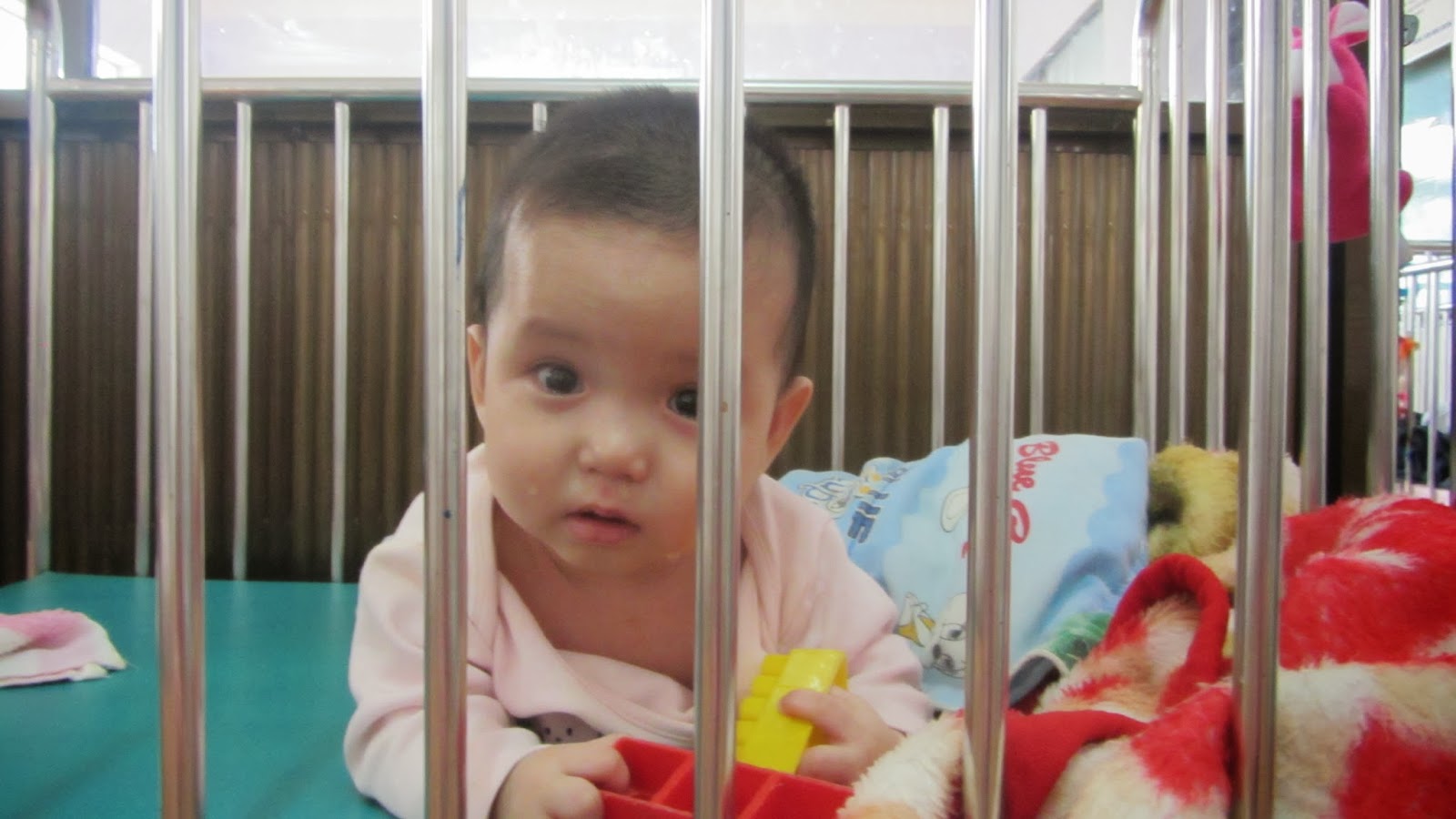 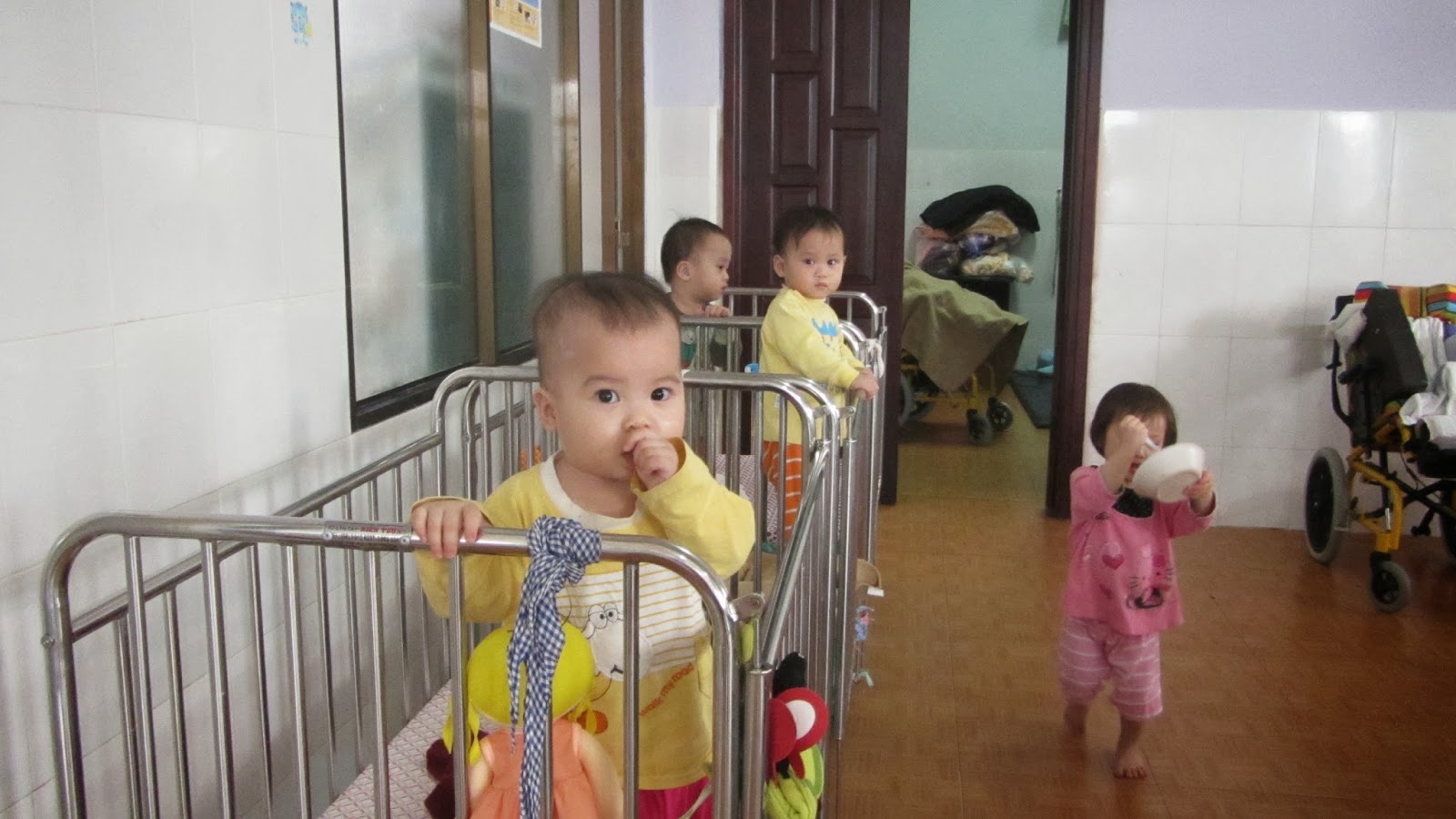 One boy stuck in my mind. But for the fact Mr T informed us he was 4 years old, I would have thought he was a toddler. Sitting in a wheel chair bundled up in clothes, you couldn’t tell the extent of his condition.  Only by feeling his legs and arms ourselves, did we realise that he was literally skin and bones. There are few words to describe the unfortunately fragile state this boy was in, but to say the least his was not a face I would be soon forgetting. 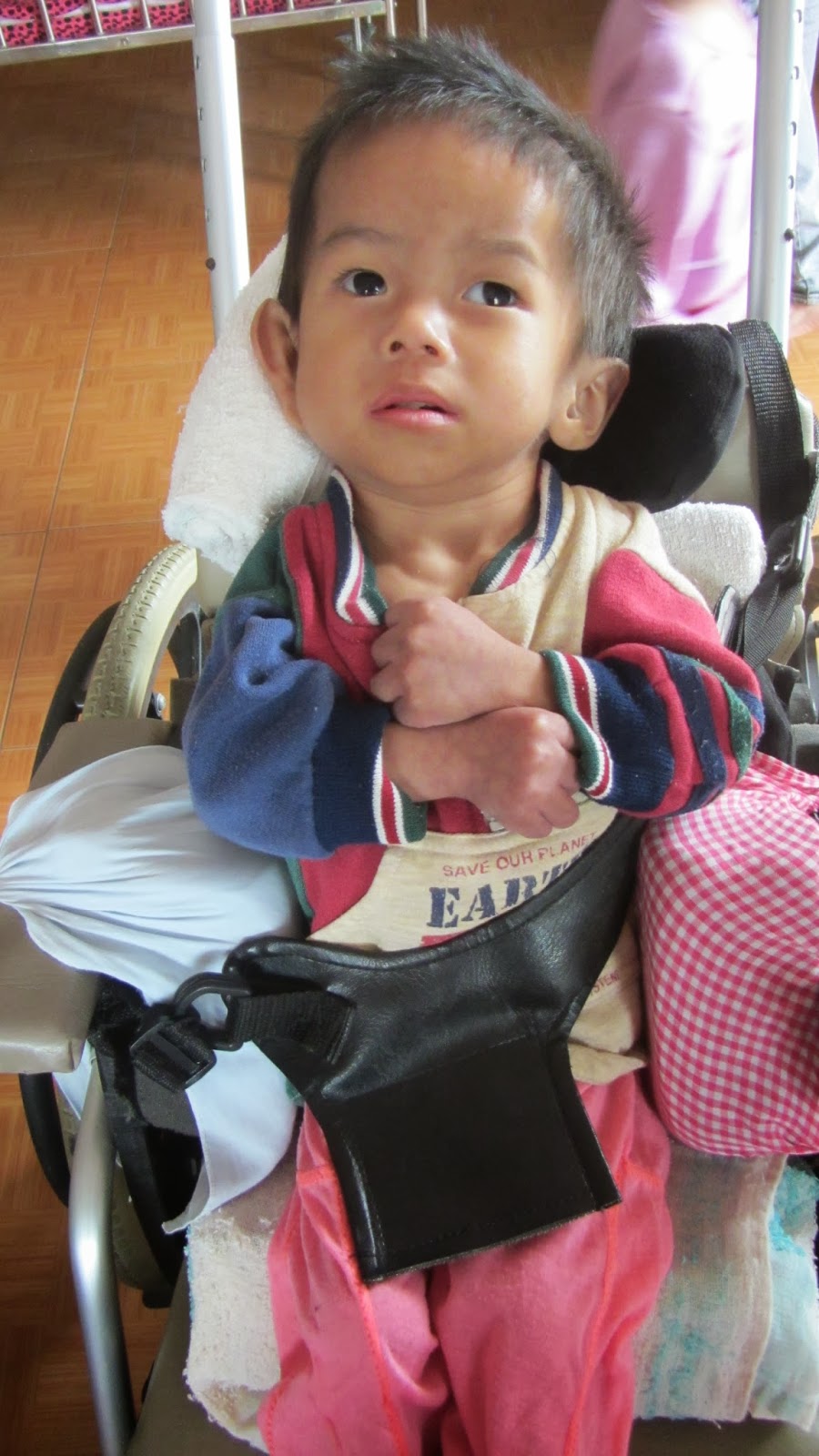 The last room had fewer occupants, but more disabilities. Mr T introduced us to 2 volunteer physiotherapists who were helping these children. To be completely honest these were not the worst disabilities I have encountered, nor of those I knew I would encounter. All the same, these kids affected me in a way I had forgotten I could be affected. 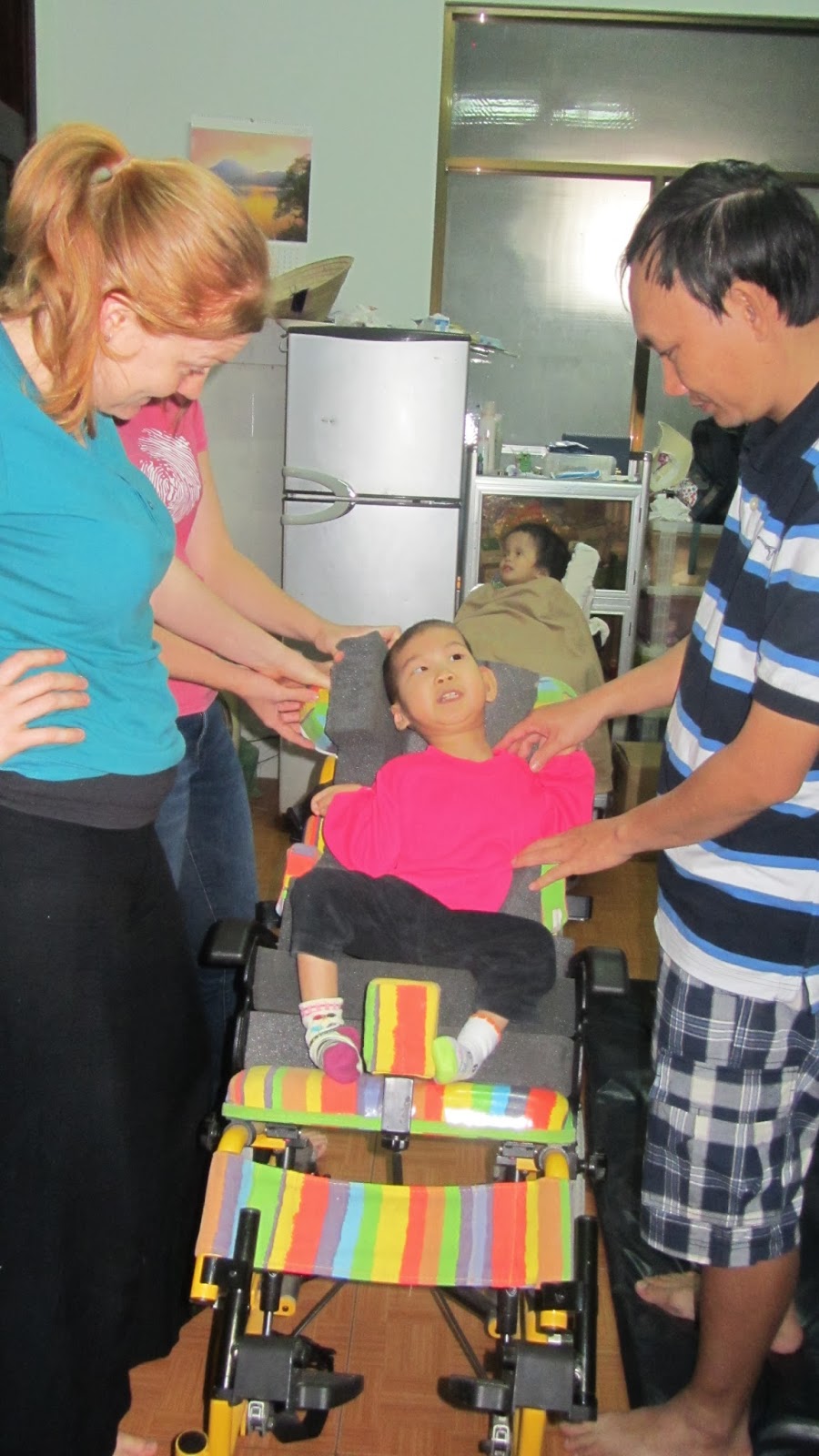 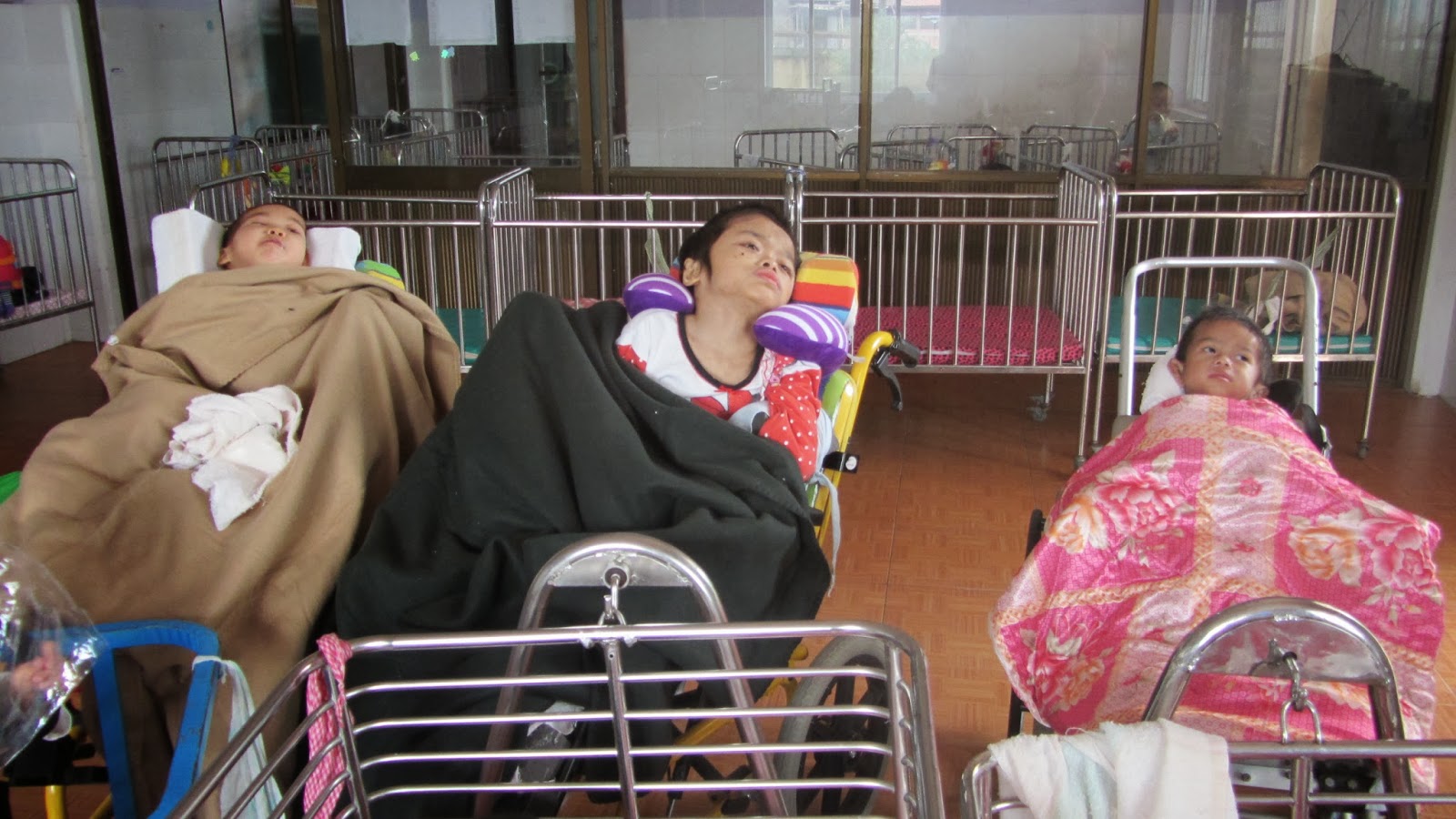 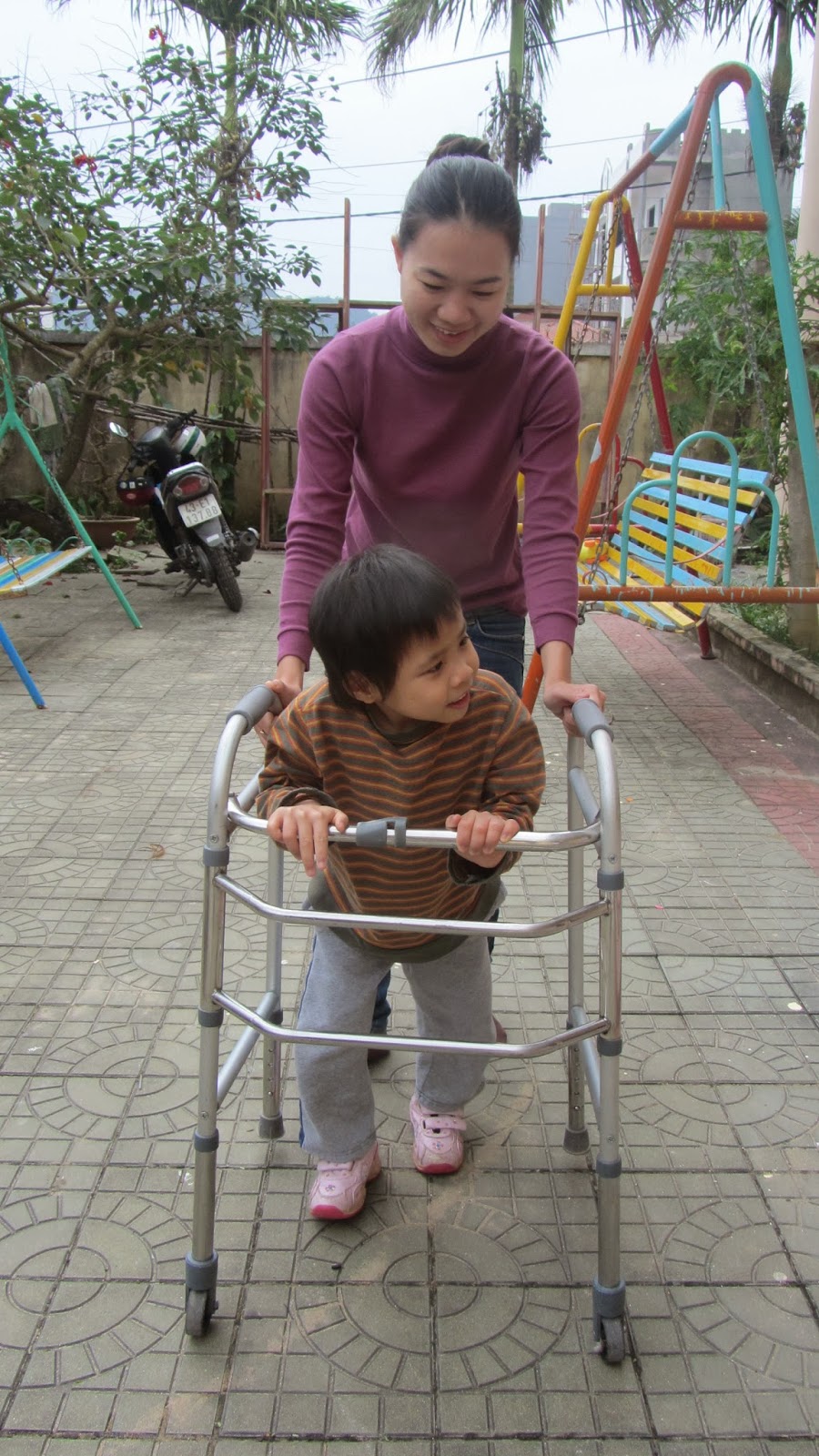 Now done with our tour, we got down to some serious baby playing. There was one girl who I grew quite connected to. At six years of age, the carers had shaved her head because she would get frustrated or hot and start to pull her hair out. We first met during feeding time. I started off feeding her, until she grabbed the spoon off me and fed herself. After that we took turns. 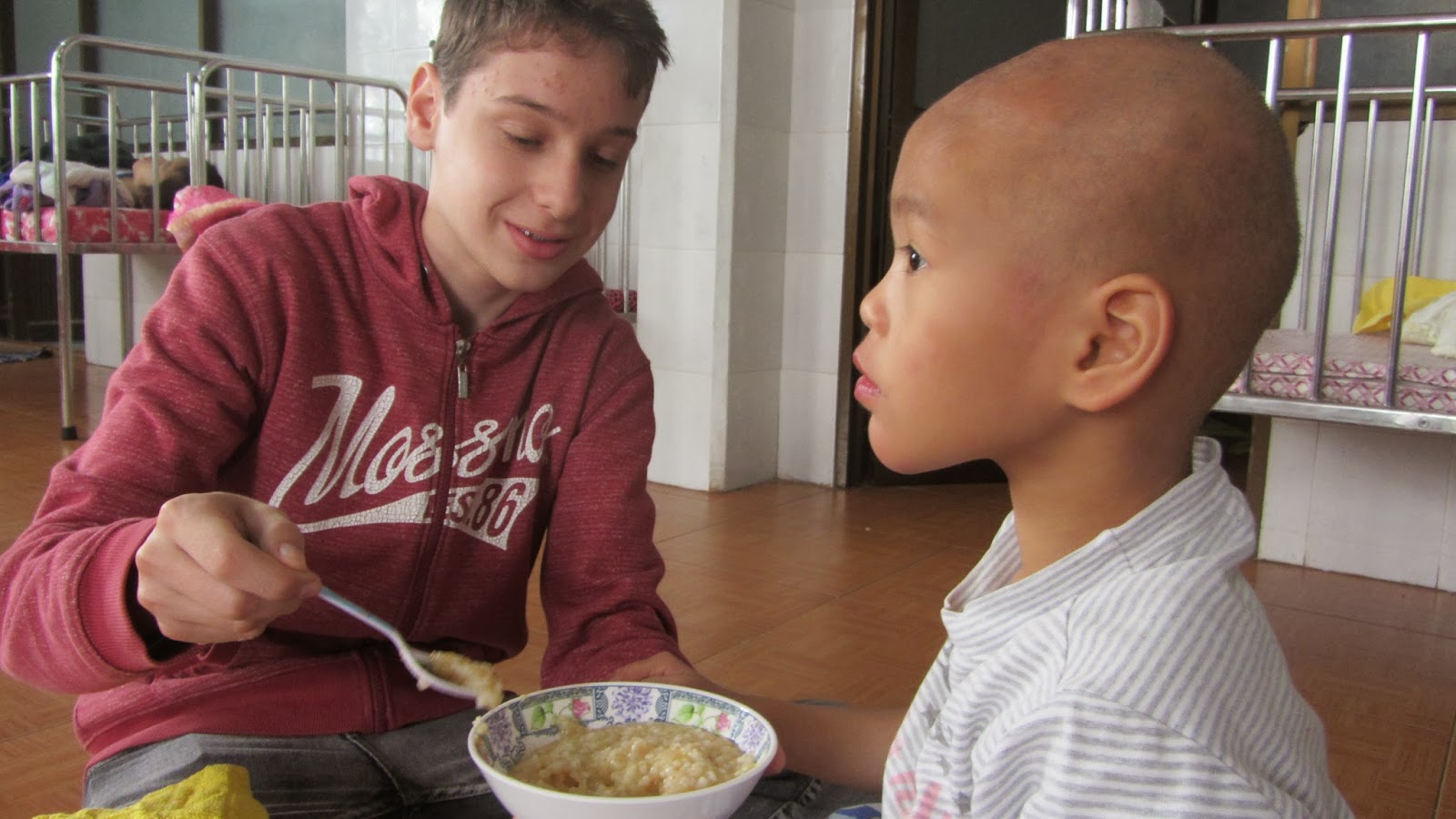 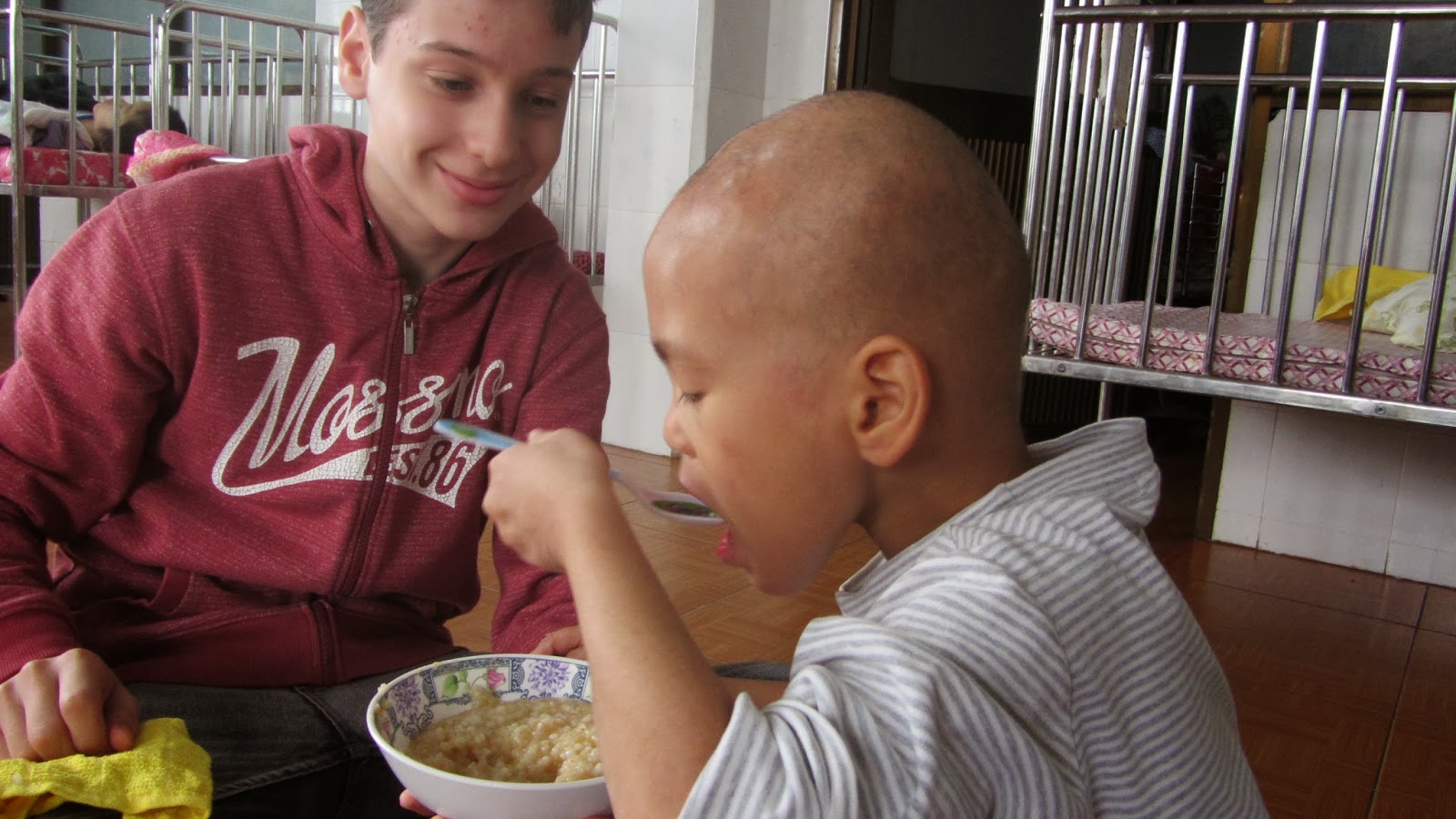 After 2 bowls and a bottle of water, she was fed and eager to go. She pulled me around the whole orphanage, supposedly showing me her home. She then found a pair of socks, made me put them on her, and off outside we went. After a brief walk, in which I taught her how to flap her arms like chicken wings, I heard a wailing coming from the door of the orphanage. Another, younger girl was there crying because she wanted to go for a walk to. I returned the first girl to the orphanage and was soon walking two more. Somehow they soon got it into their heads that I could carry both of them at the same time. As it turned out, I could not. 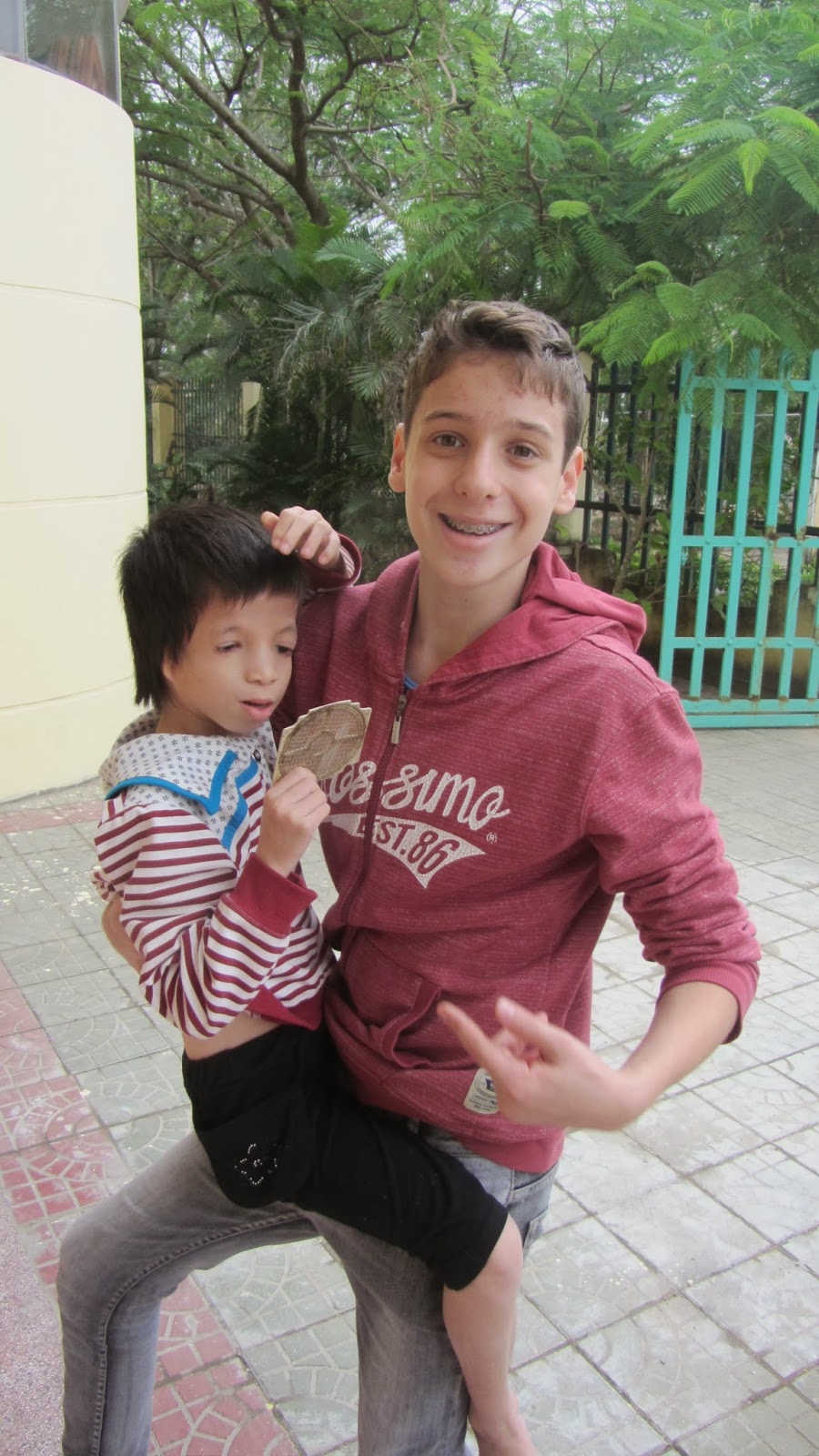 The rest of the time was spent playing and interacting with all the kids in the orphanage. I had forgotten how such little things could radiate so much joy. I left there elevated by the children’s boundless happiness. However there also existed within me a sense of loss leaving these children I bonded with in the short time I knew them. With a heavy heart I realised that this would be only a fraction of the sensation felt leaving Vietnam completely. 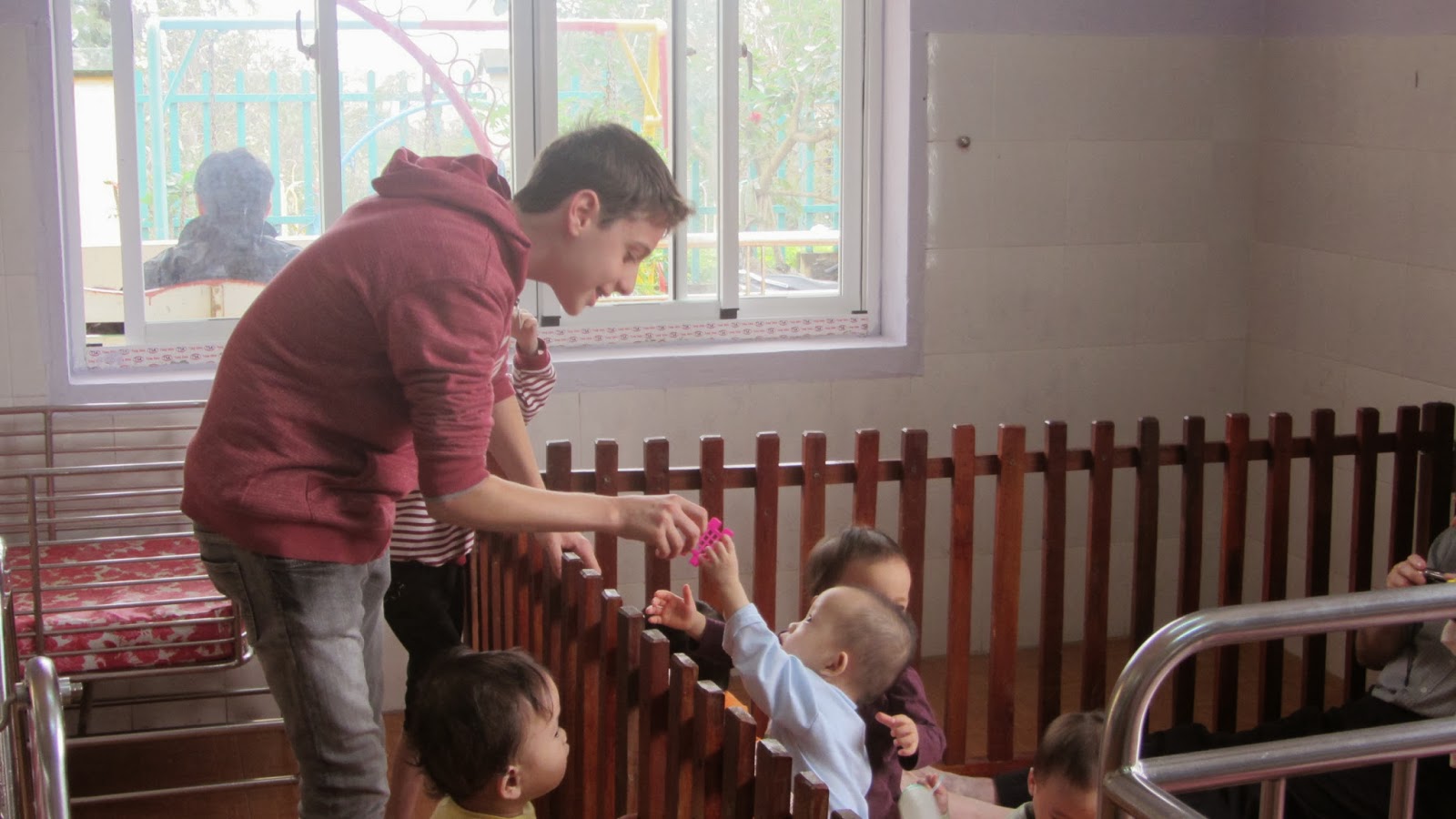 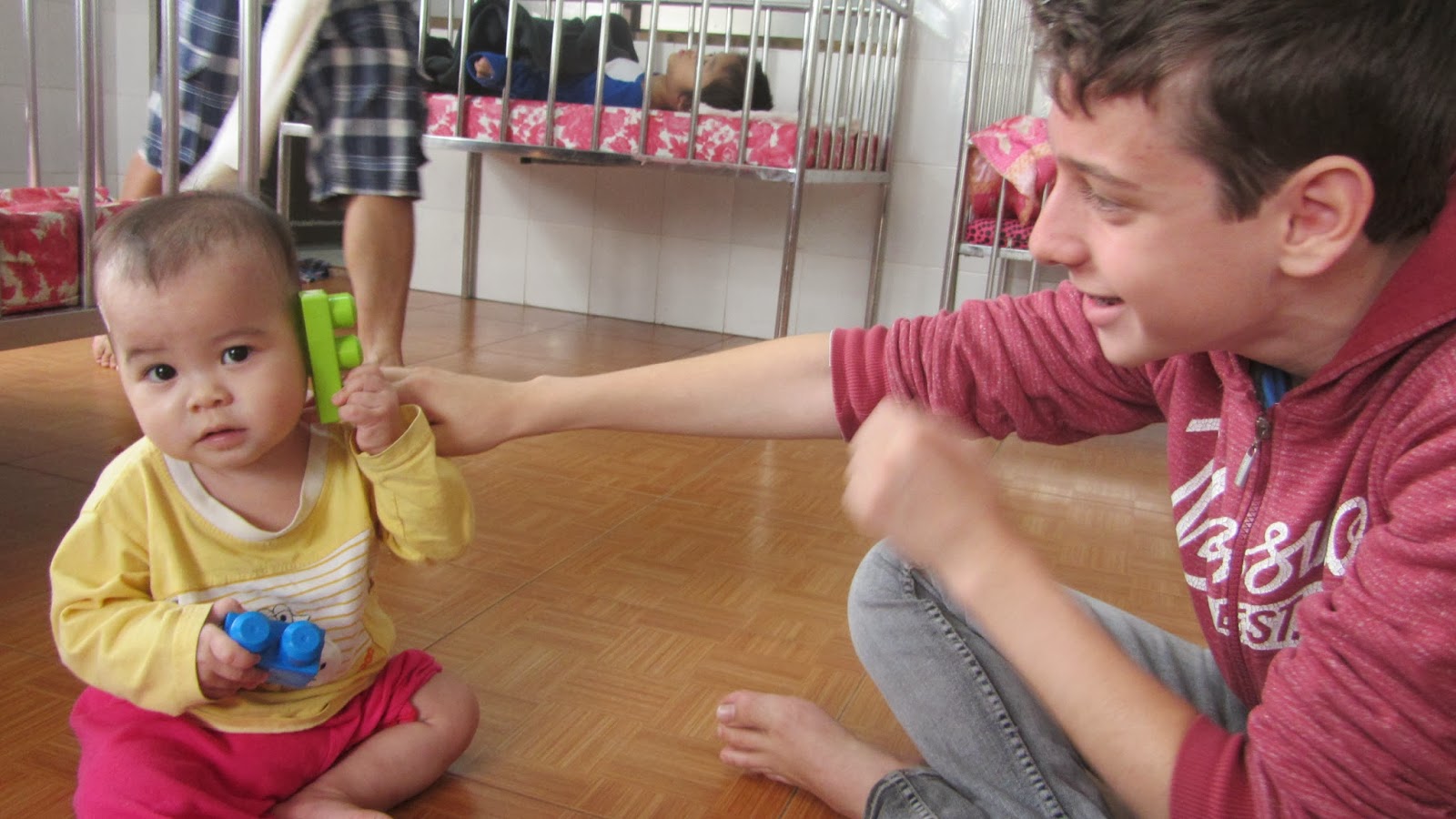 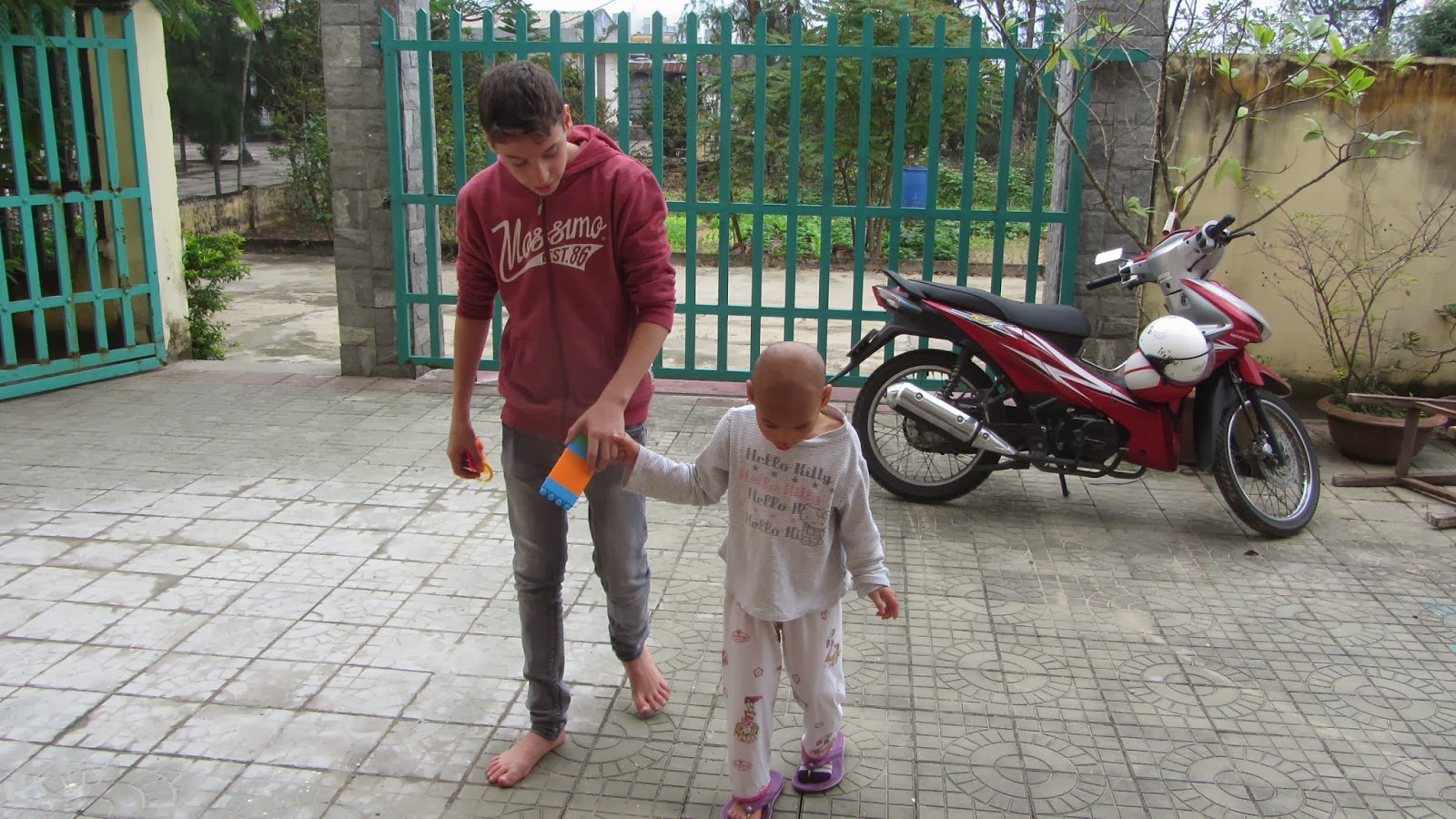 Posted by Anna LittleShoe at 4:14 PM