“A kind gesture can reach a wound that only compassion can heal.” (Steve Maraboli)

Up early again at crazy o’clock, but this time off in a mini-bus. Stop off to pick up local government officials Mr Hai and Mr Sinh. We are visiting 3 families in the disadvantaged region of Tien Phuoc.

First up: a family consisting of a father, Mr Nhan, two daughters,Anh, aged 9, and Phuong aged 8, and a boy, Hoang Nam of 7. The mother ran off with another man leaving the father to provide for his 3 children. Anna has already supplied a cow to this family to breed more cows to sell as a source of income. (You can read his full story and our last visit to him at: http://missionnampossible.blogspot.com.au/2013/07/everyone-can-do-simple-things-to-make.html)

We trudge along a dirt path, narrow enough so we are forced to walk single file. It’s raining so we have donned raincoats that may as well have been garbage bags with arm holes. To either side are rice fields, ahead and behind us only the dirt path. 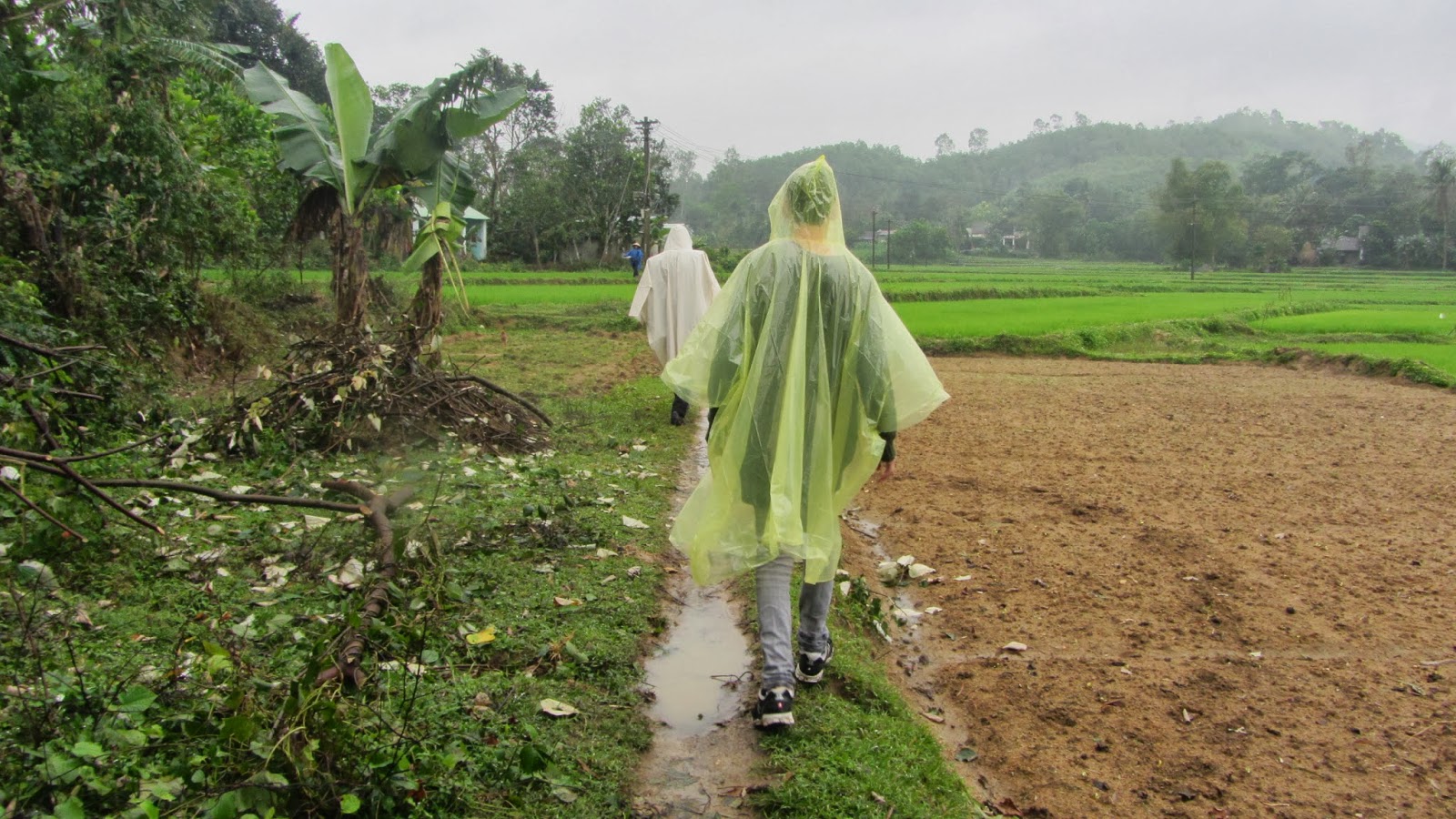 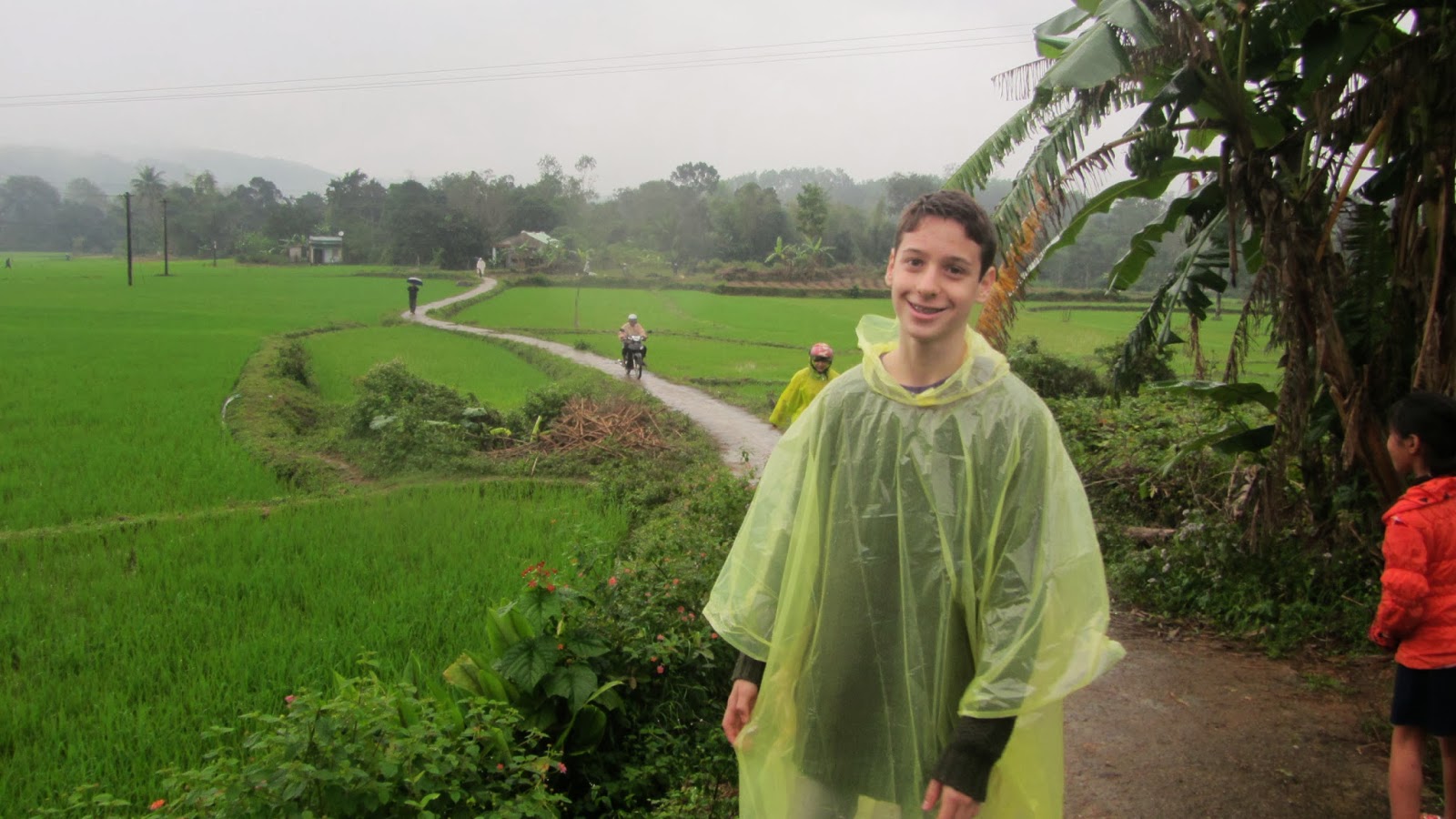 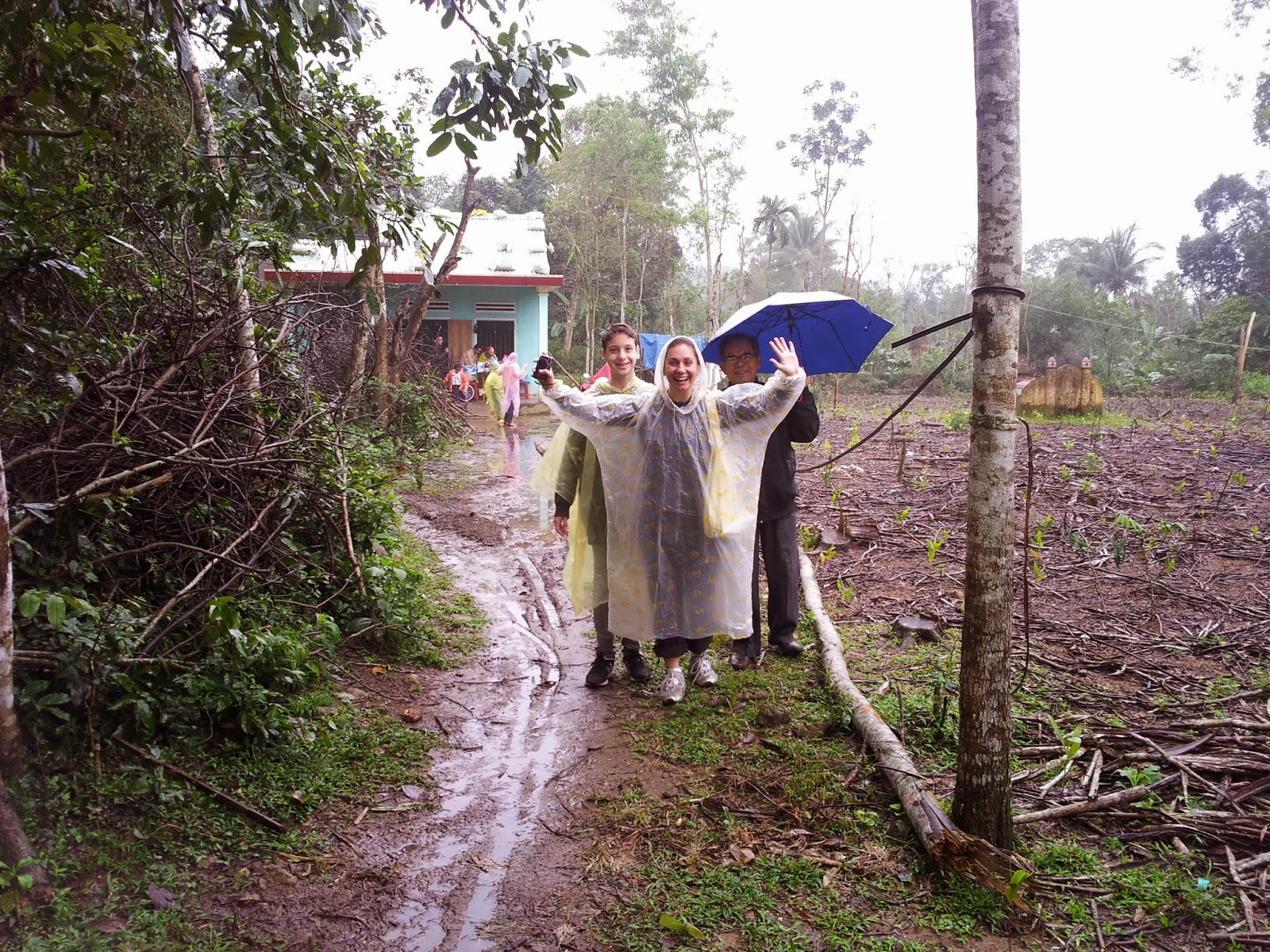 Soon we turn off the track and I get my first glimpse of the family’s home. As expected it was a rundown thing with few rooms and dirty walls. As we approach, the Man of the house comes around the corner with the cow Anna had donated last July. 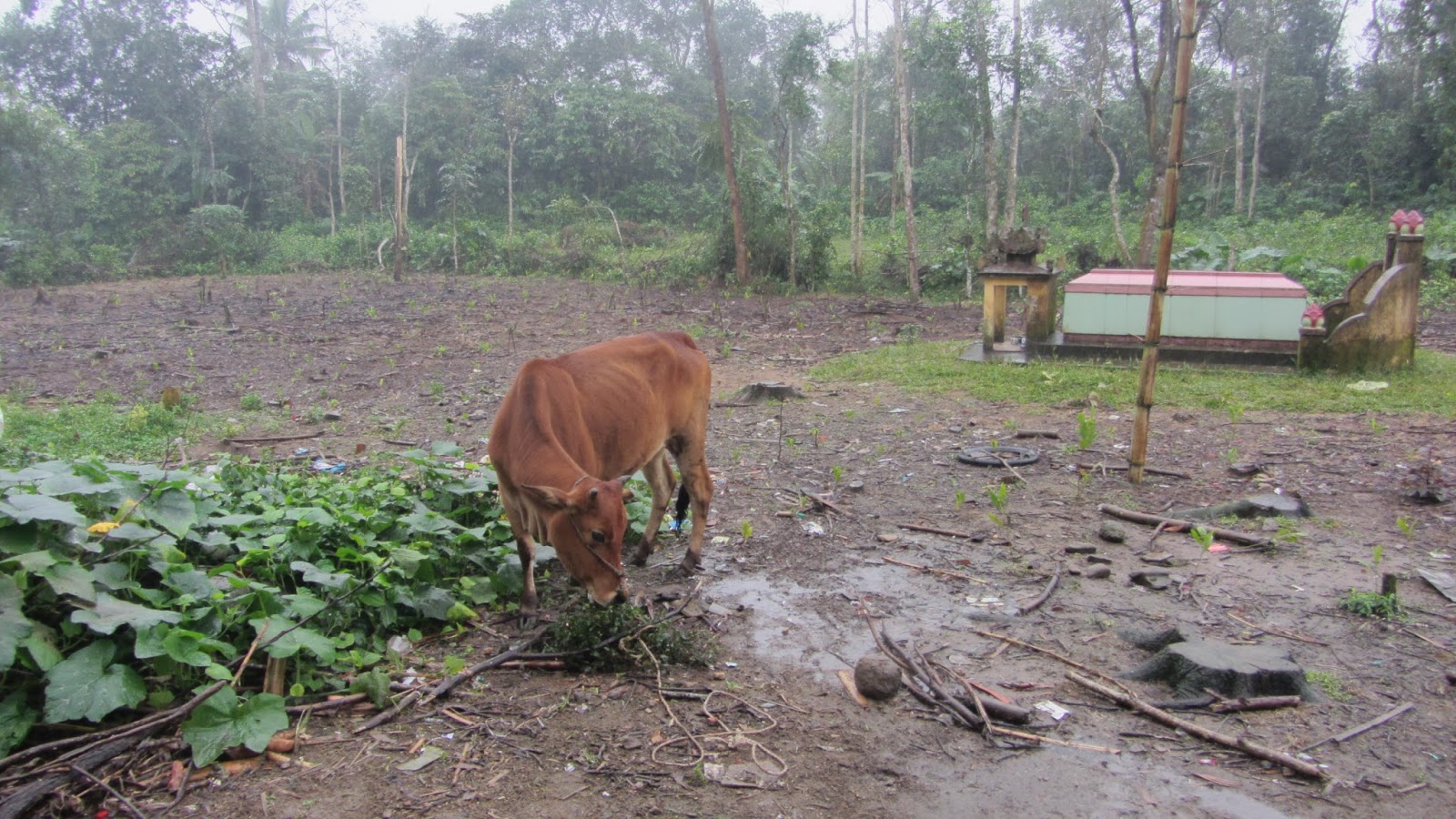 The kids poke their heads out from the door as we approach, probably scared out of their minds at the sight of westerners. The officials stacked the food and toys on a table and rested the bike next to it. In regular Vietnamese fashion, they made a whole big deal of thanking us in a very ceremonial way. Luckily this time at our request there was no big banner to mark the occasion.

The father, Mr Nhan, was overcome with emotion as he told us that these are the first toys his children have ever had.
We are supporting these three children to continue with their education, providing funds for uniforms and text books. 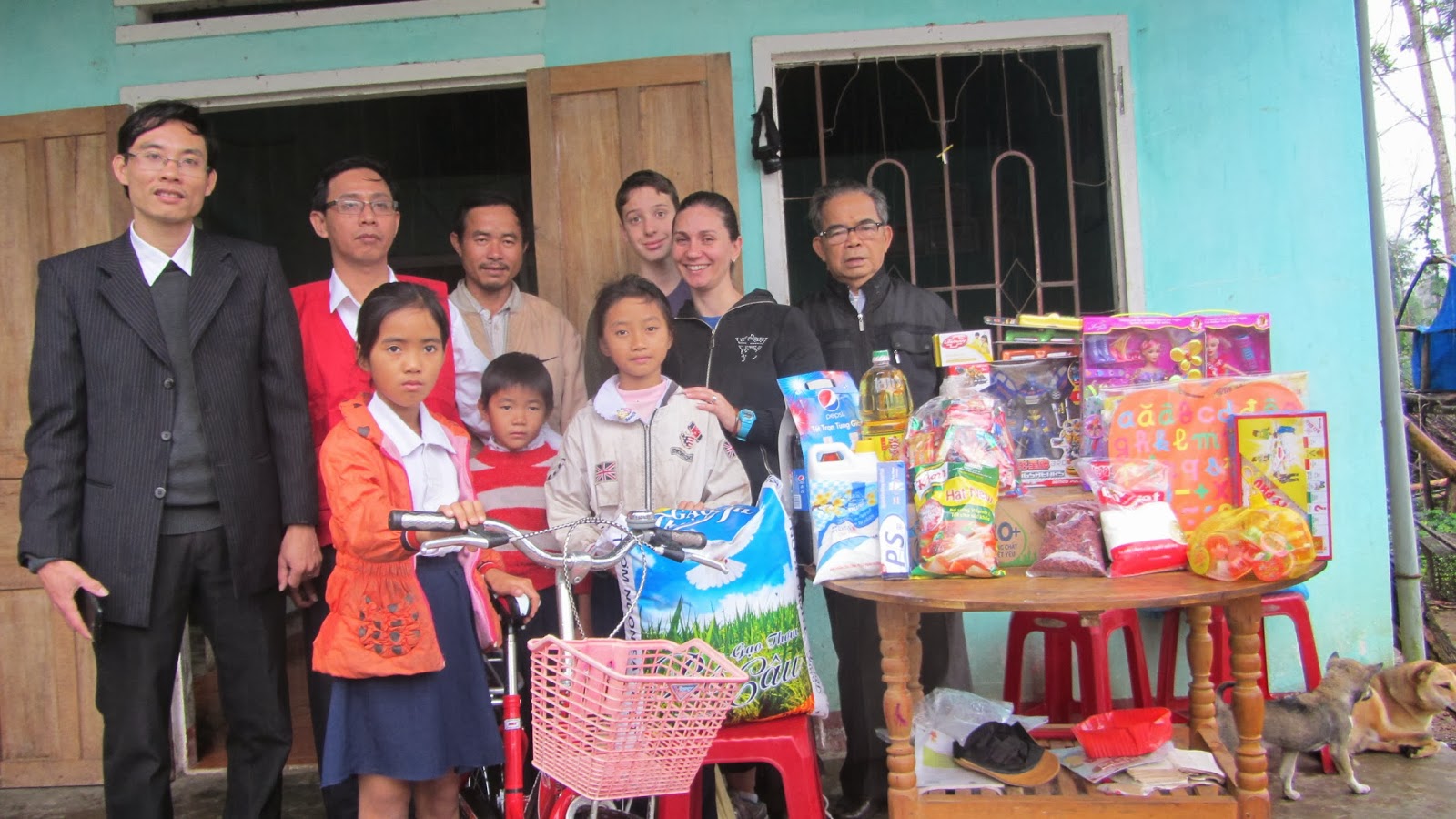 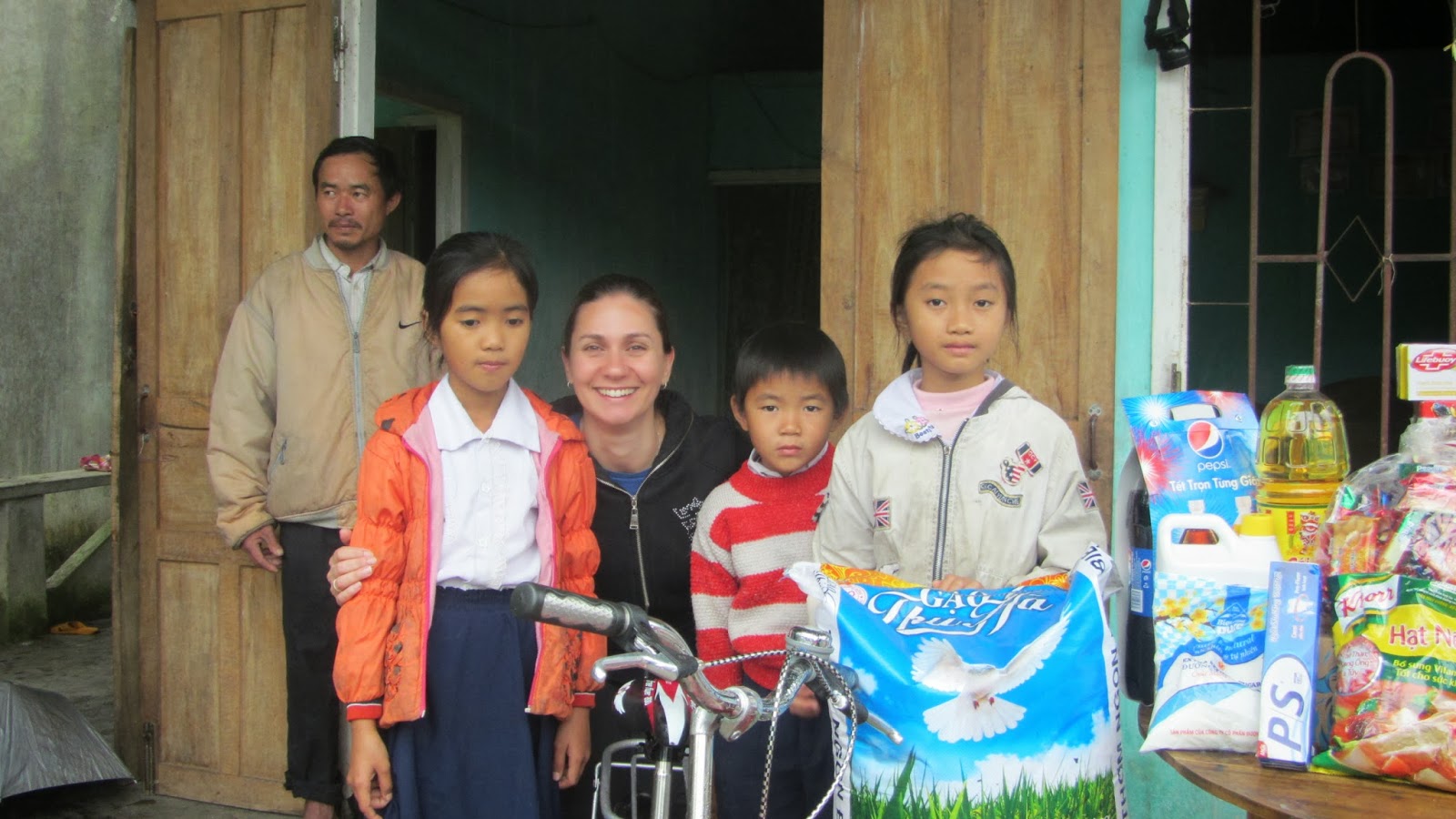 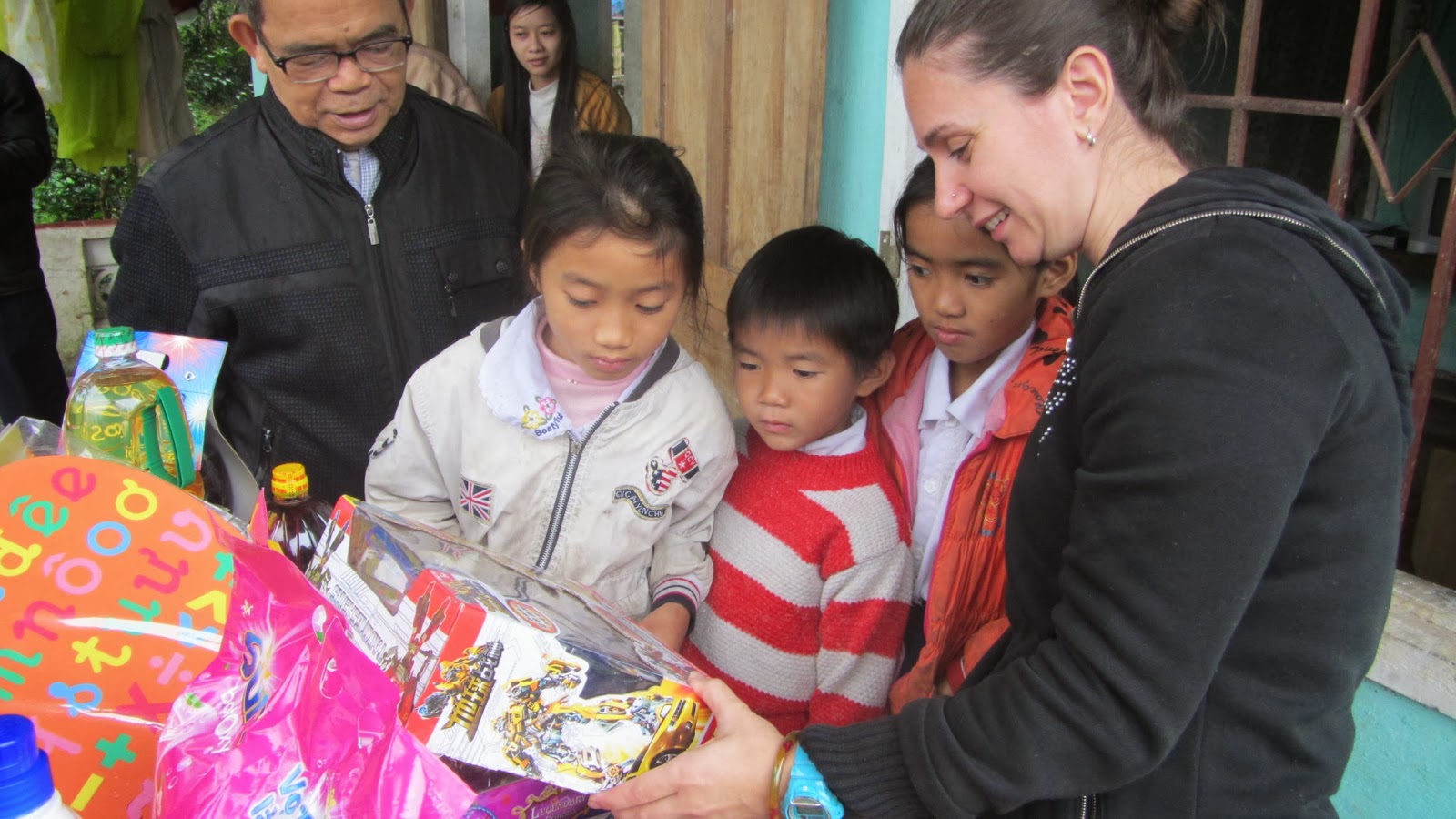 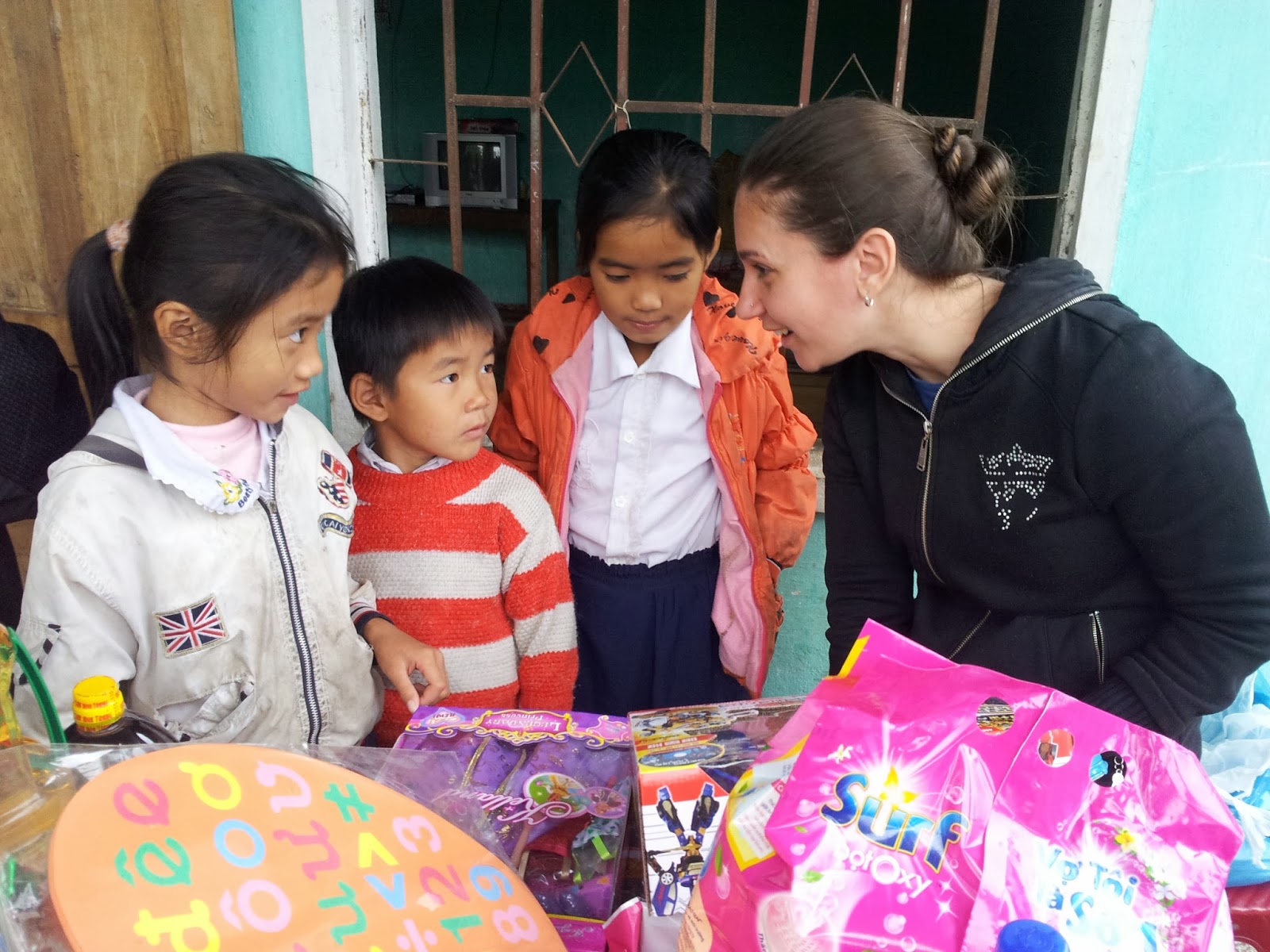 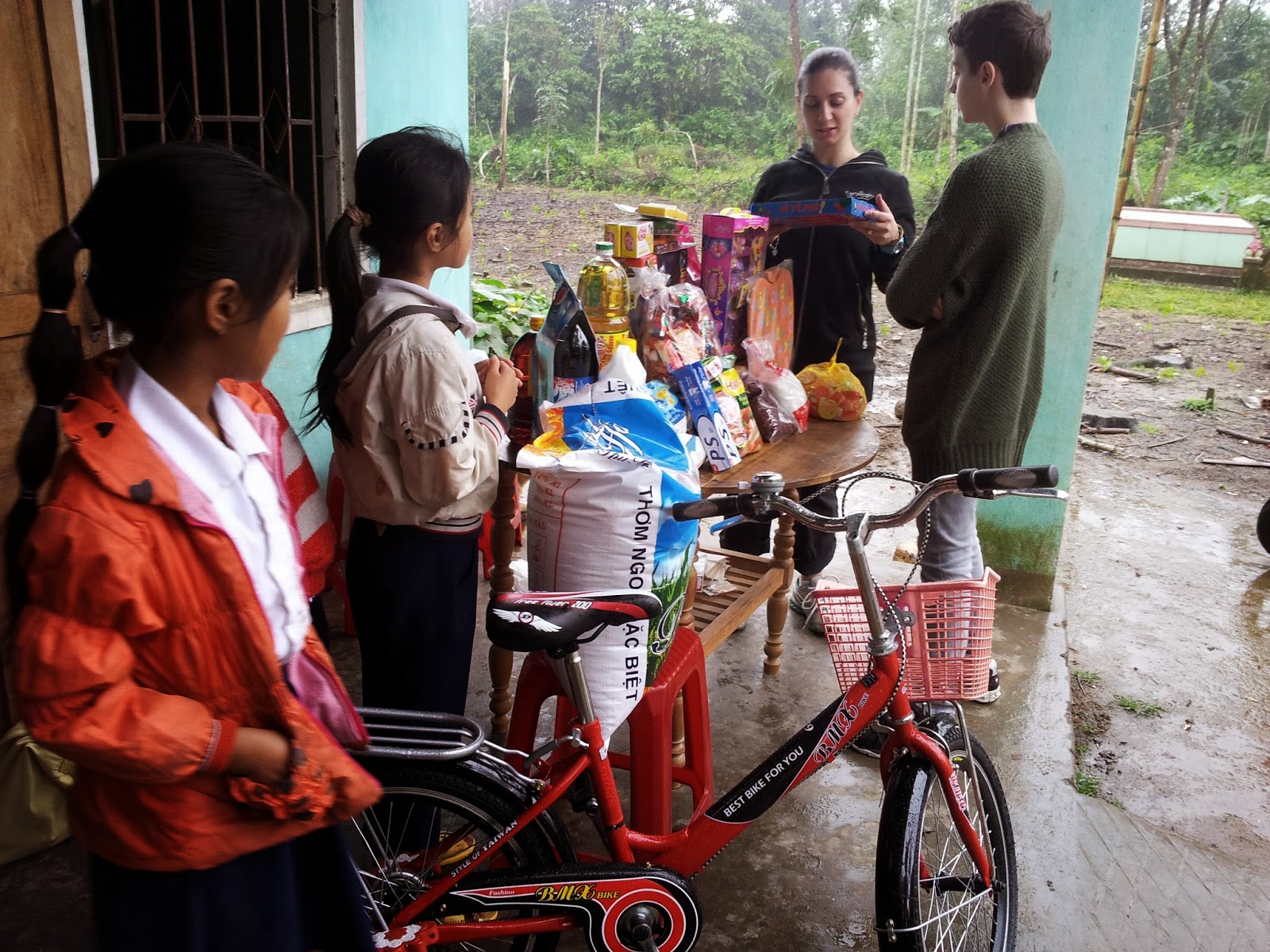 The second family we visited had a similarly narrow path up to their house. On our left as we headed uphill were rice fields. Trying to get all the food and supplies we bought this family up to them, took the effort of three men and a wheelbarrow! 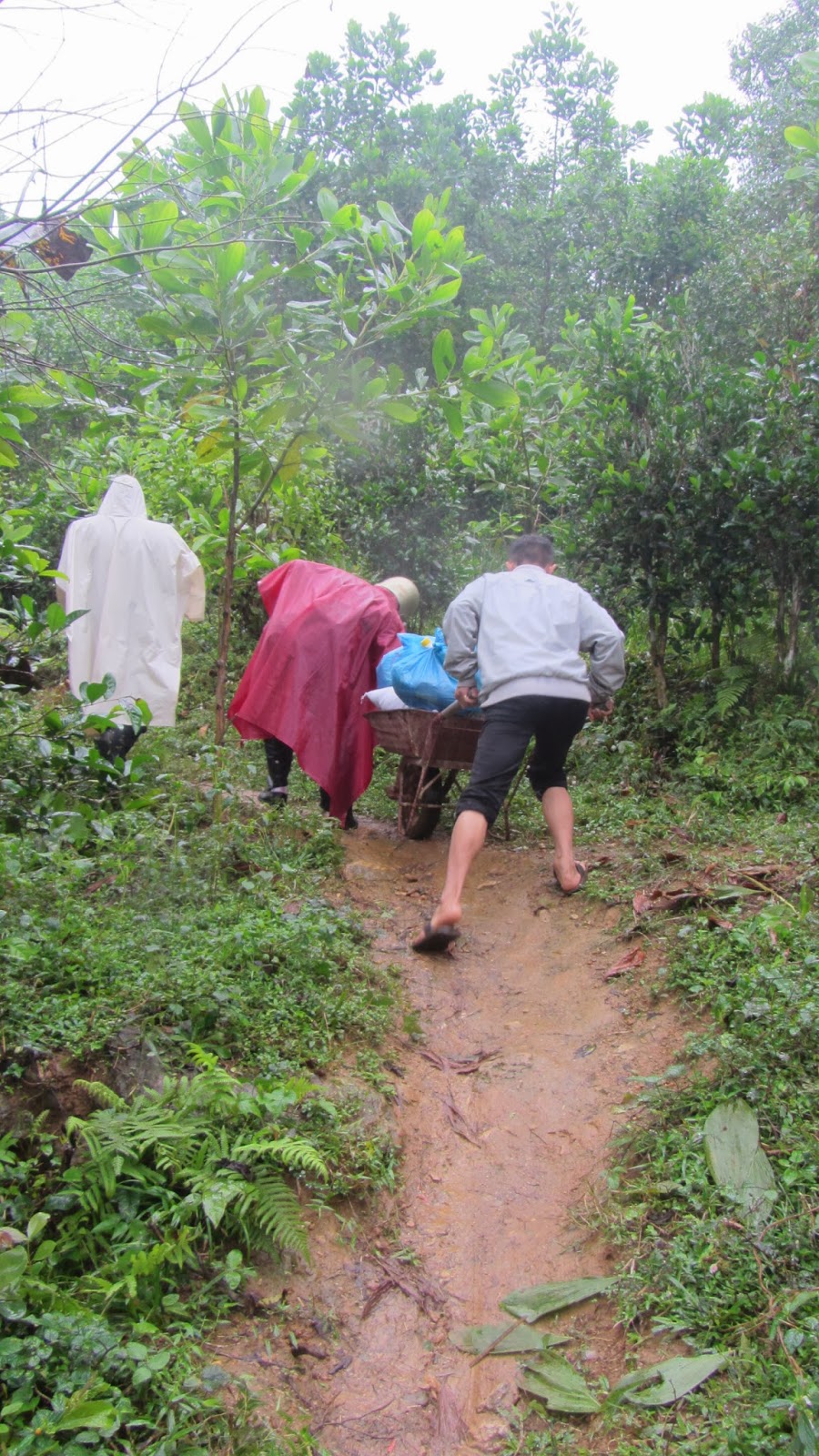 At this time of morning the sun peeked through the clouds to shyly embrace the watery paddies. If it were not for the state of the family’s house, it would have been a beautiful place to live. The house, like many others we had seen throughout the district, was rundown. As if the weight of the sky had become too much for the building in its old age, buckling the roof. To our left on the verge of the hill, amiss the vegetation was a cow. The cow we had bought this family. 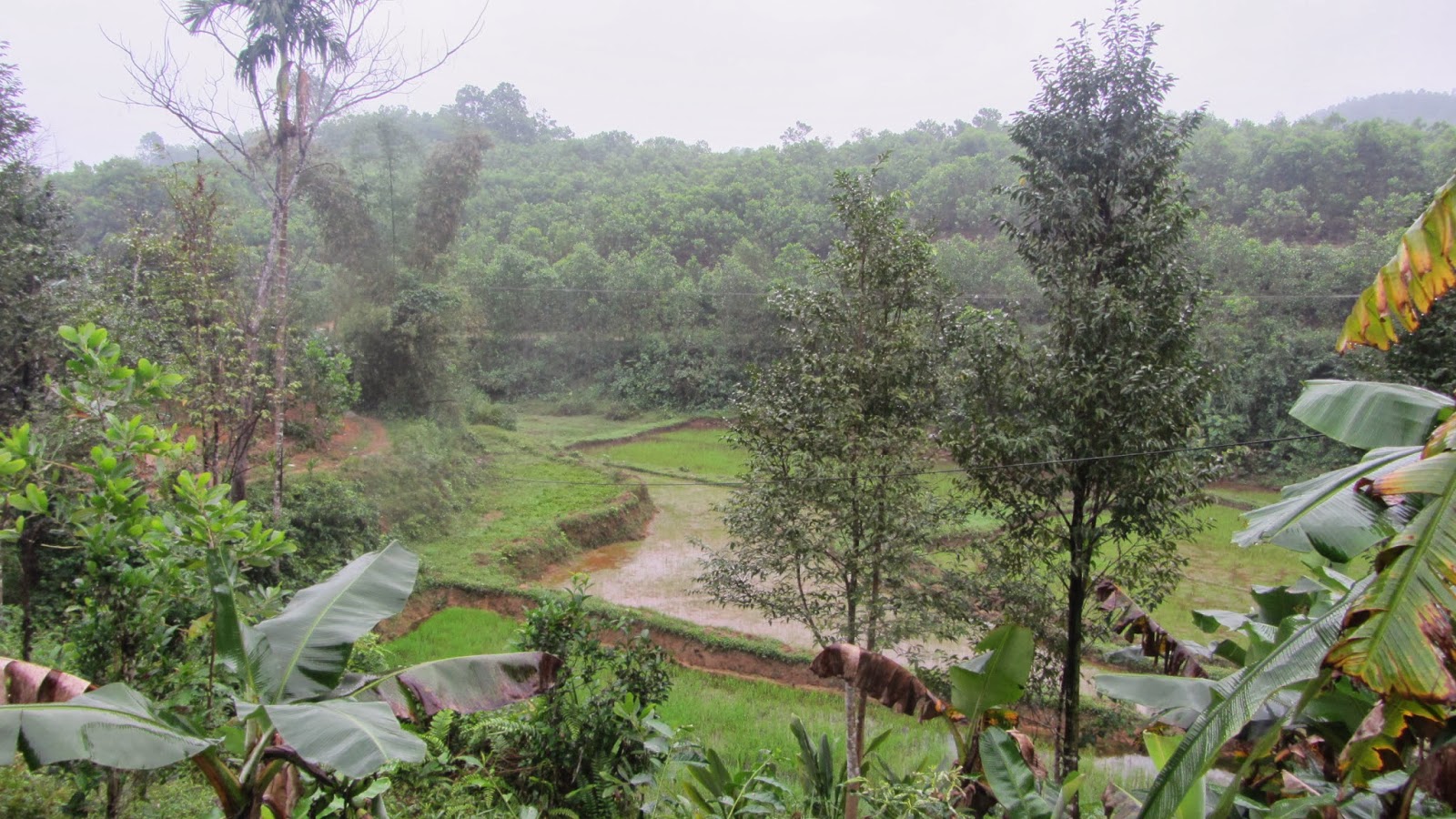 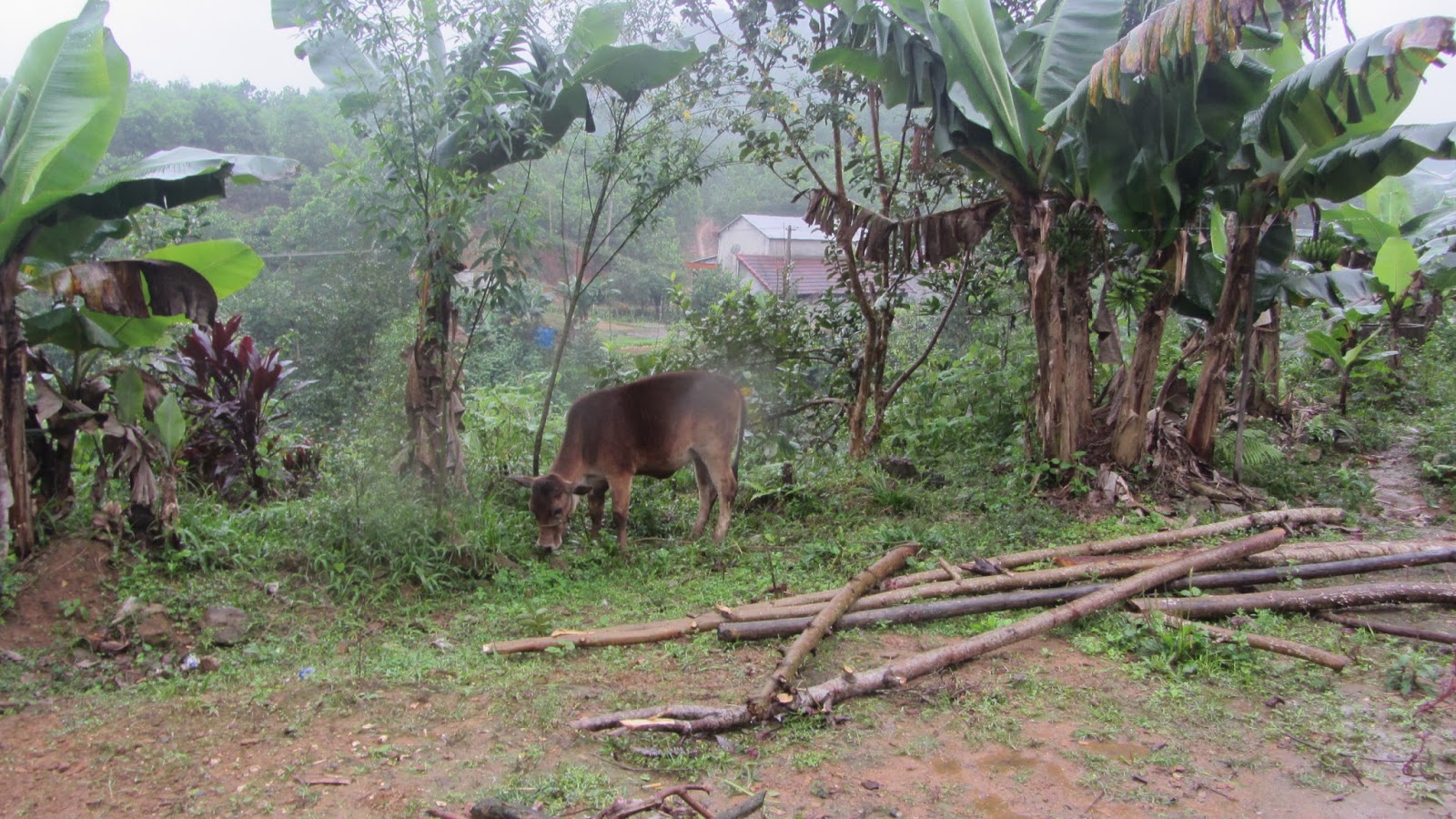 We were soon introduced to Grandma Nhu and her two grandchildren: Long, aged 13 and Ly aged 8. Grandma was a 76 year old women, tasked with the upbringing of her two grandchildren after their dad, her son, died in a flood, and their mum ran off with another man. Mum has not returned for her children, not even for a visit. Grandma does not want to give them up to an orphanage. This strong lady, who goes and begs around the community for a bowl of rice almost every day, just to feed her grandchildren touched our hearts at her sheer tenacity and determination in keeping these children with her. Ly peered out curiously from behind Grandma, eyes coming to rest on the bag of toys we held. Long had a more cautious look in his eyes as he beheld us. Although only 13 years old, it was clear, responsibility had been thrust upon his shoulders after the disappearance of his parents. 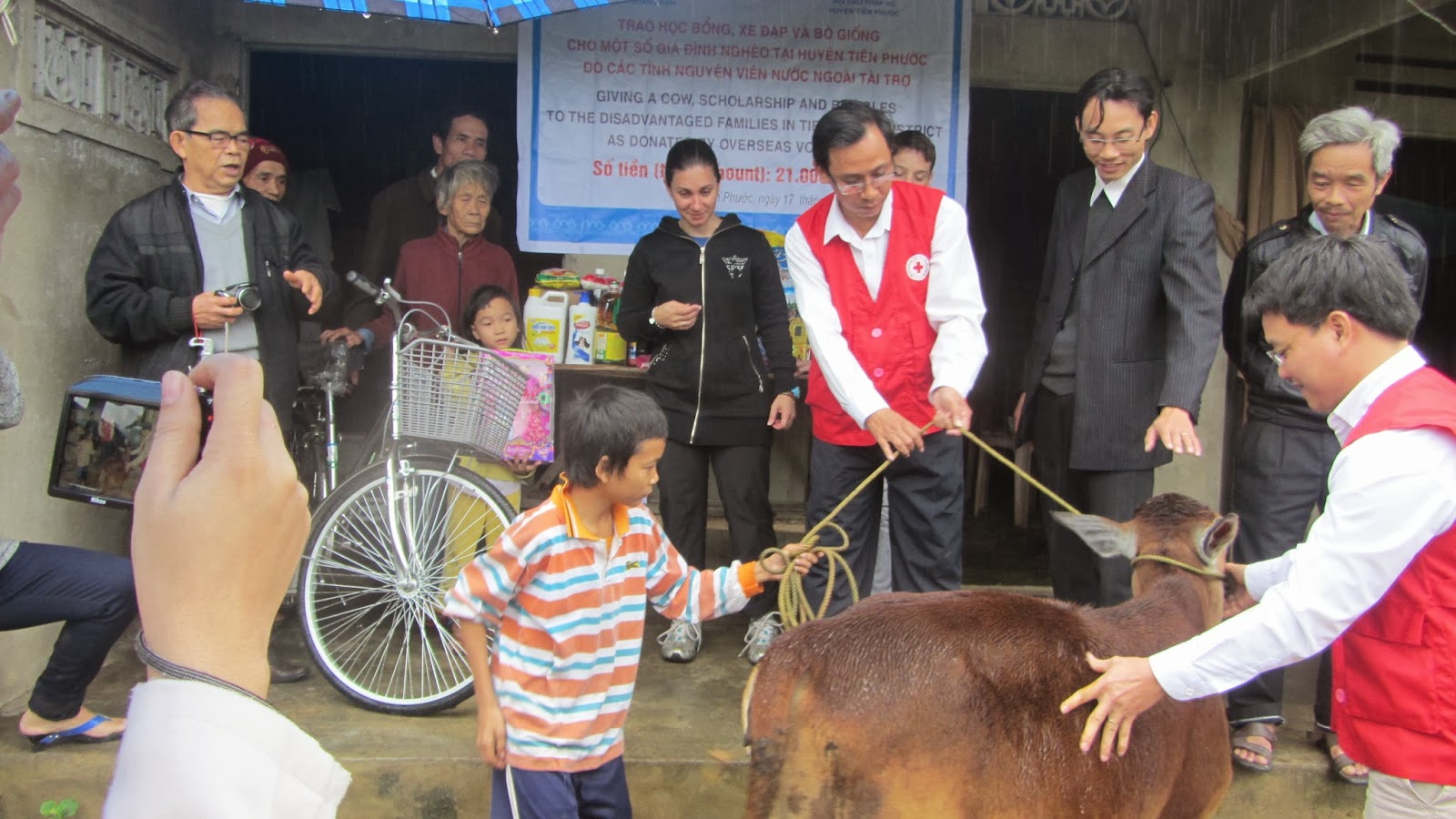 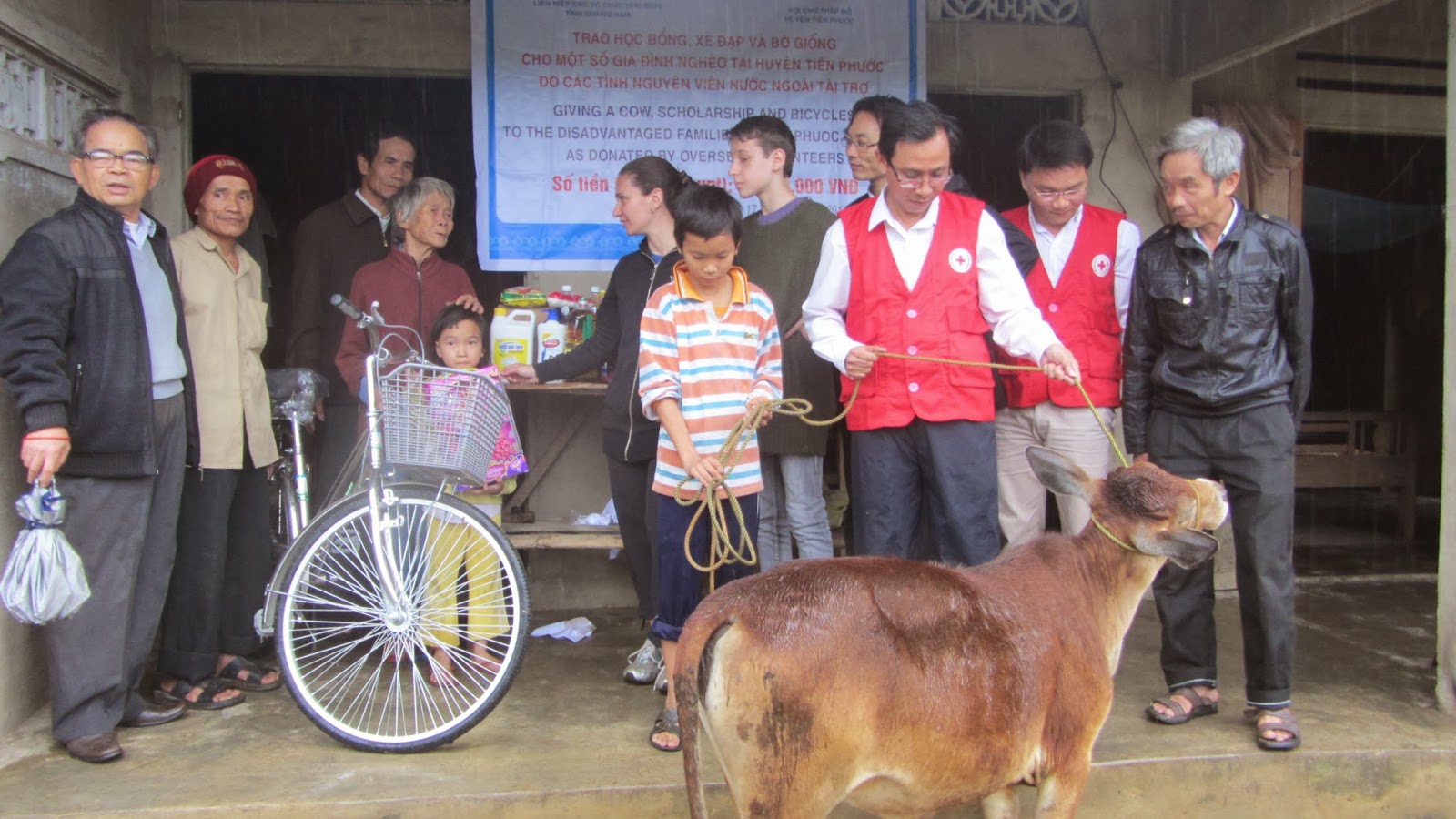 Here, unfortunately, the embarrassing thank you banner made an appearance for us. Again, the toys, food/supplies and bike were set up for ceremony and photography. 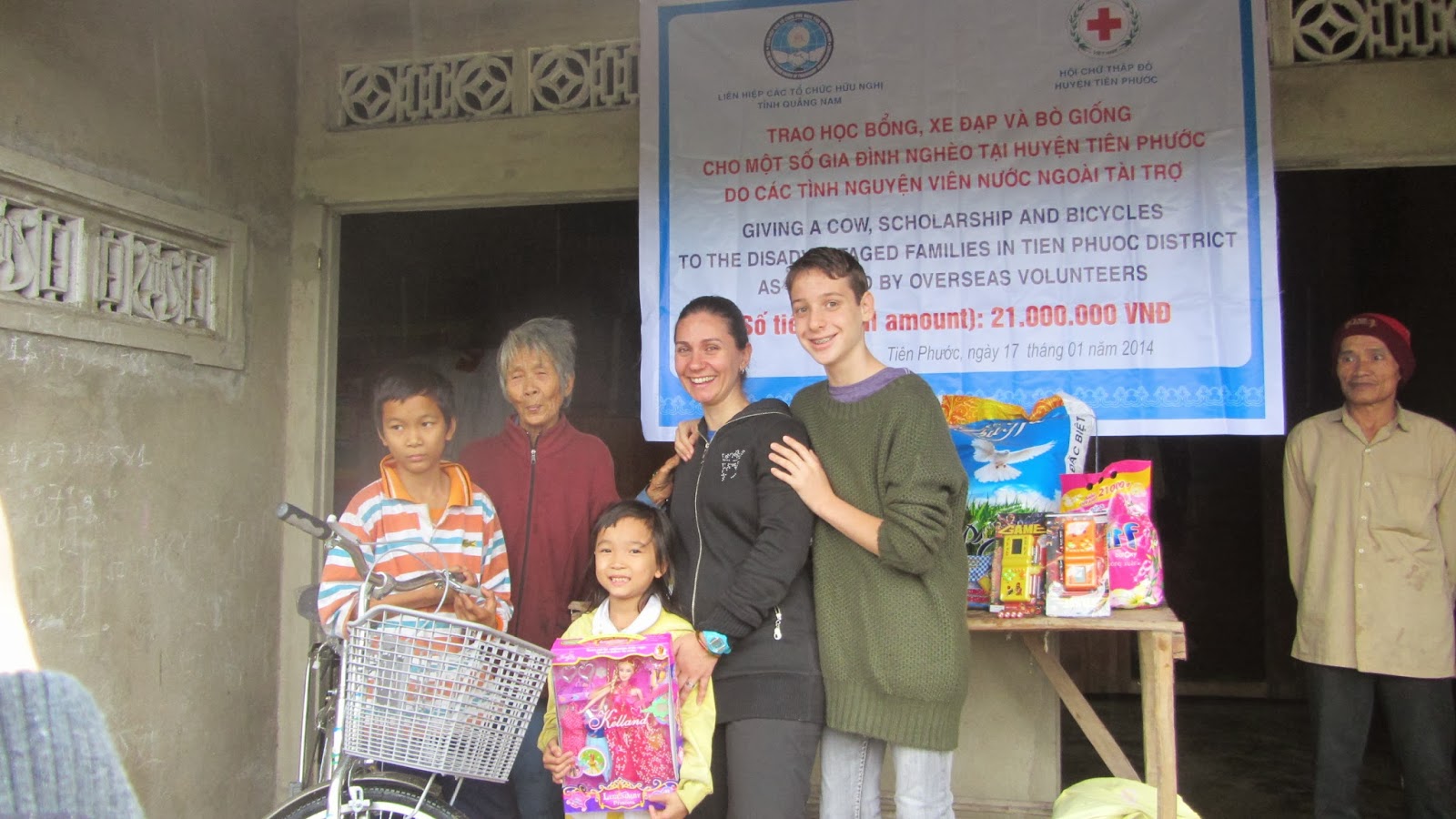 To our delight, Ly grew ever more excited at the presentation at each new thing. At the sight of her very own doll with adjustable accessories, she could not contain her joy. An excited squeal escaped her lips and she visibly started shaking. Even at the presentation of her brothers bike, Ly's enthusiasm was palpable. She even managed to harass an embarrassed smile onto her brother's face. After forced smiles for official photos, Ly eagerly pulled apart the toy packaging’s and set to work with glee. I helped her put in the batteries for an electronic tetris game, and was profusely thanked by the Grandma who was reduced to tears by the whole event. After a tour of the late father’s alter and a quick selfie with the cow, we were off again into the morning drizzle. 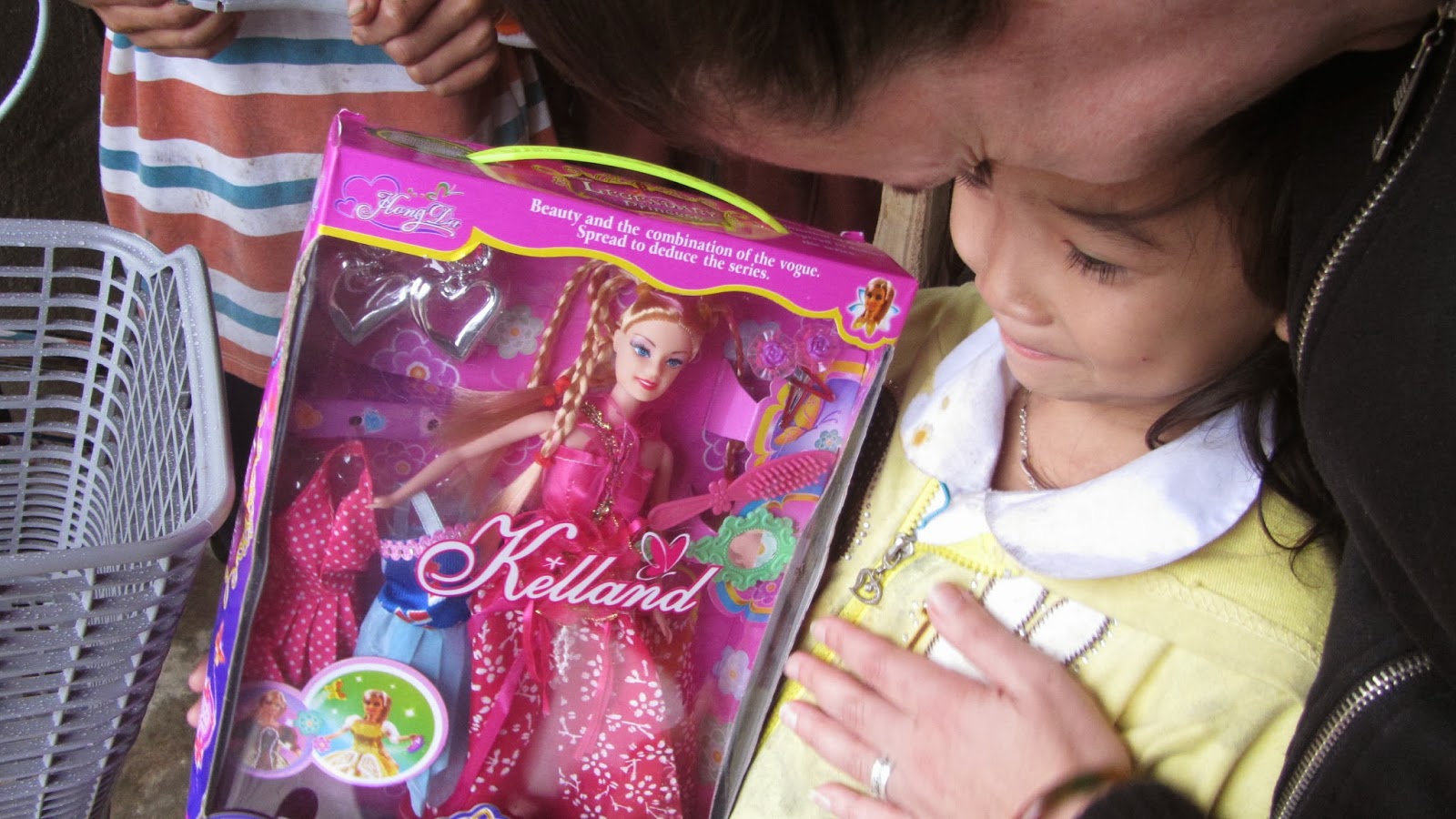 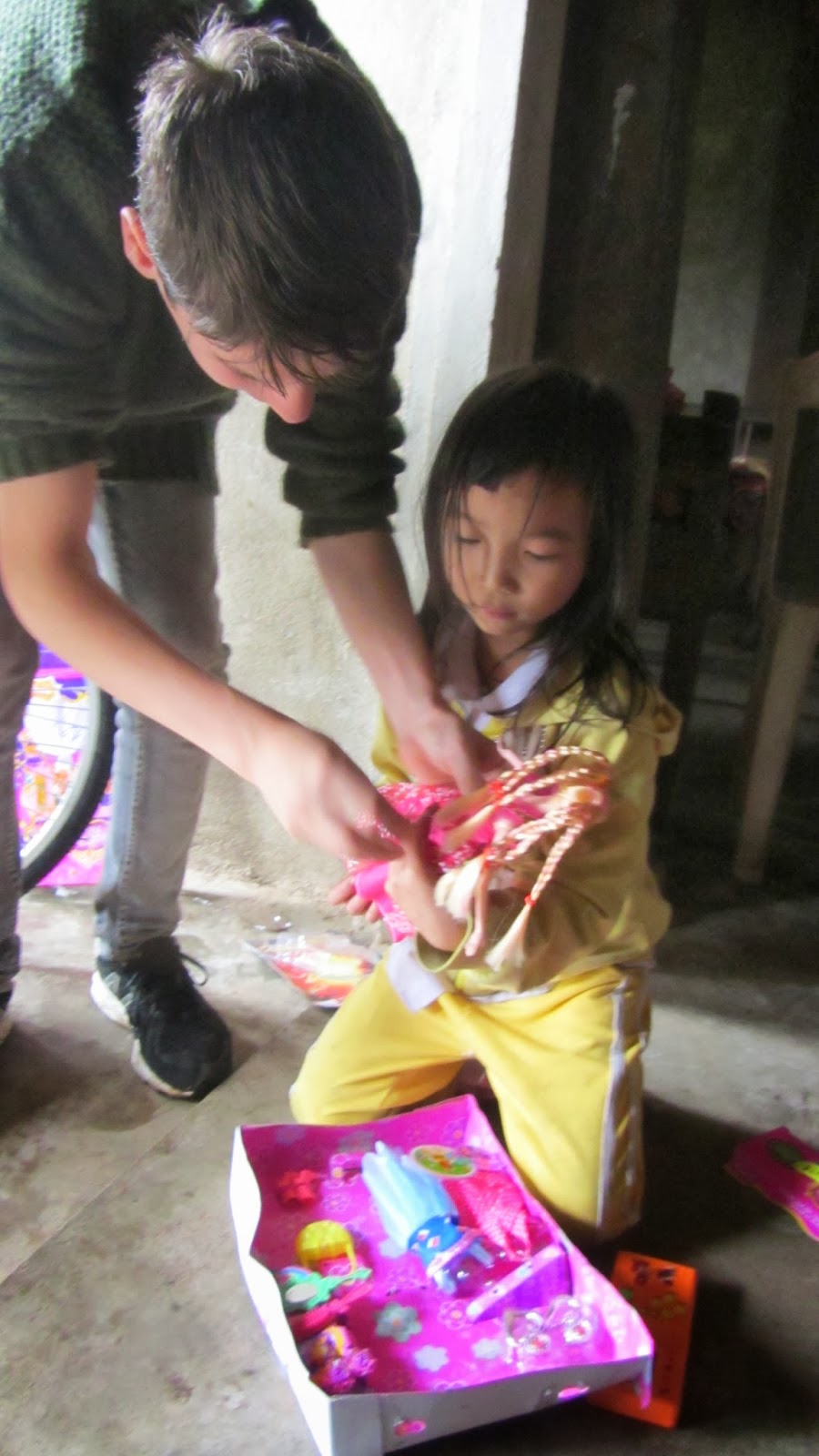 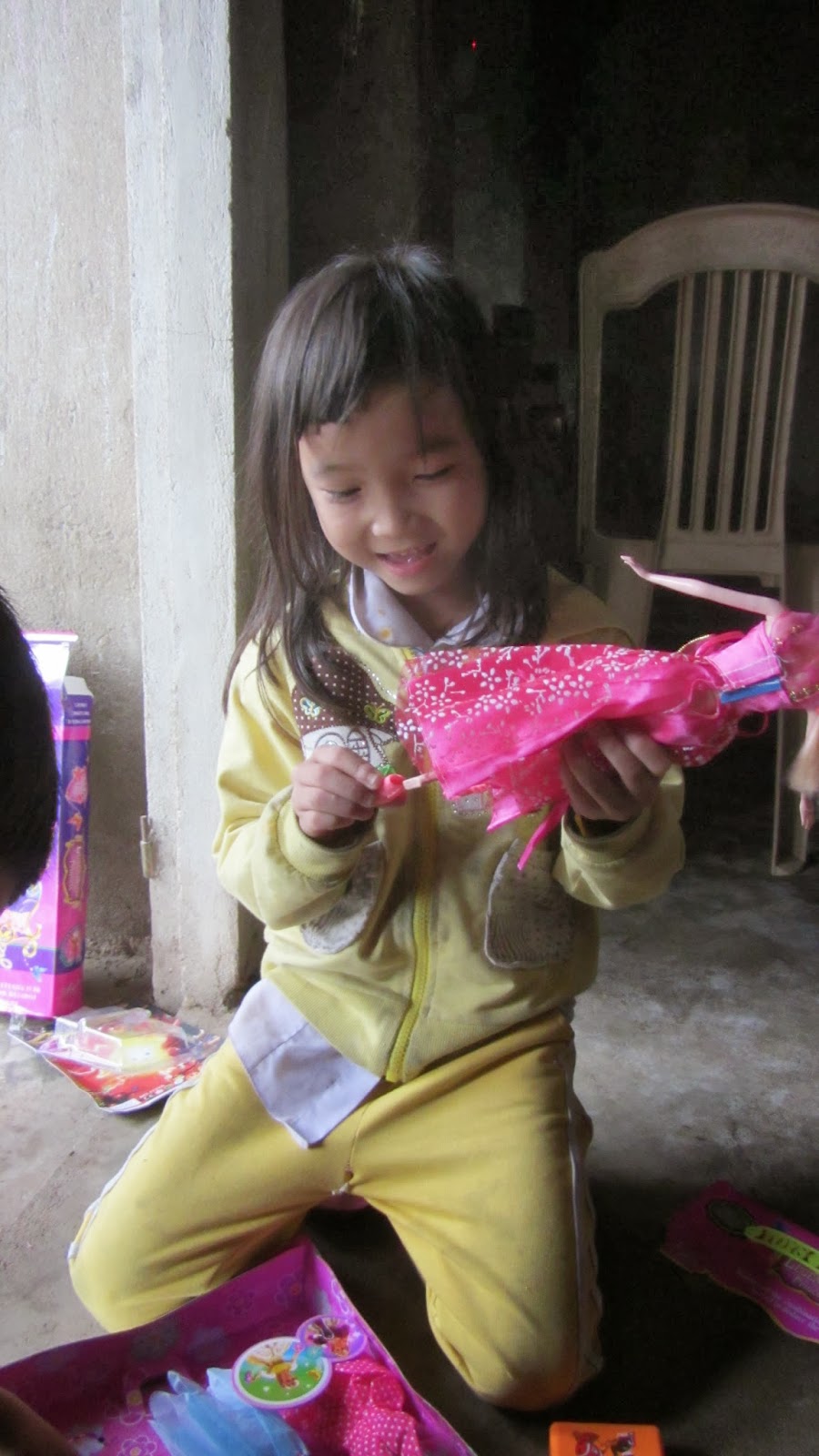 I left there feeling a sense of accomplishment. The amount of innocent joy we had brought Ly and Long was something to smile about. Even though he didn't show it, I like to think we made a difference to Long too. Making the hard times ahead he would face as man of the house,  that little bit easier. And once cow starts to have babies in a year, the begging for rice to help survive would cease. Long, already has developed the hard shell that has emerged from having to deal with life's challenges already: I could not imagine what his reality is like: knowing that his mother intentionally turned her back on him and his sister, must weigh on his mind. And then there is the rest: so poor, having to beg for food, feeling protective over his Grandma and sister, continue with school and keep up with school work also…. A heavy burden for such small shoulders. 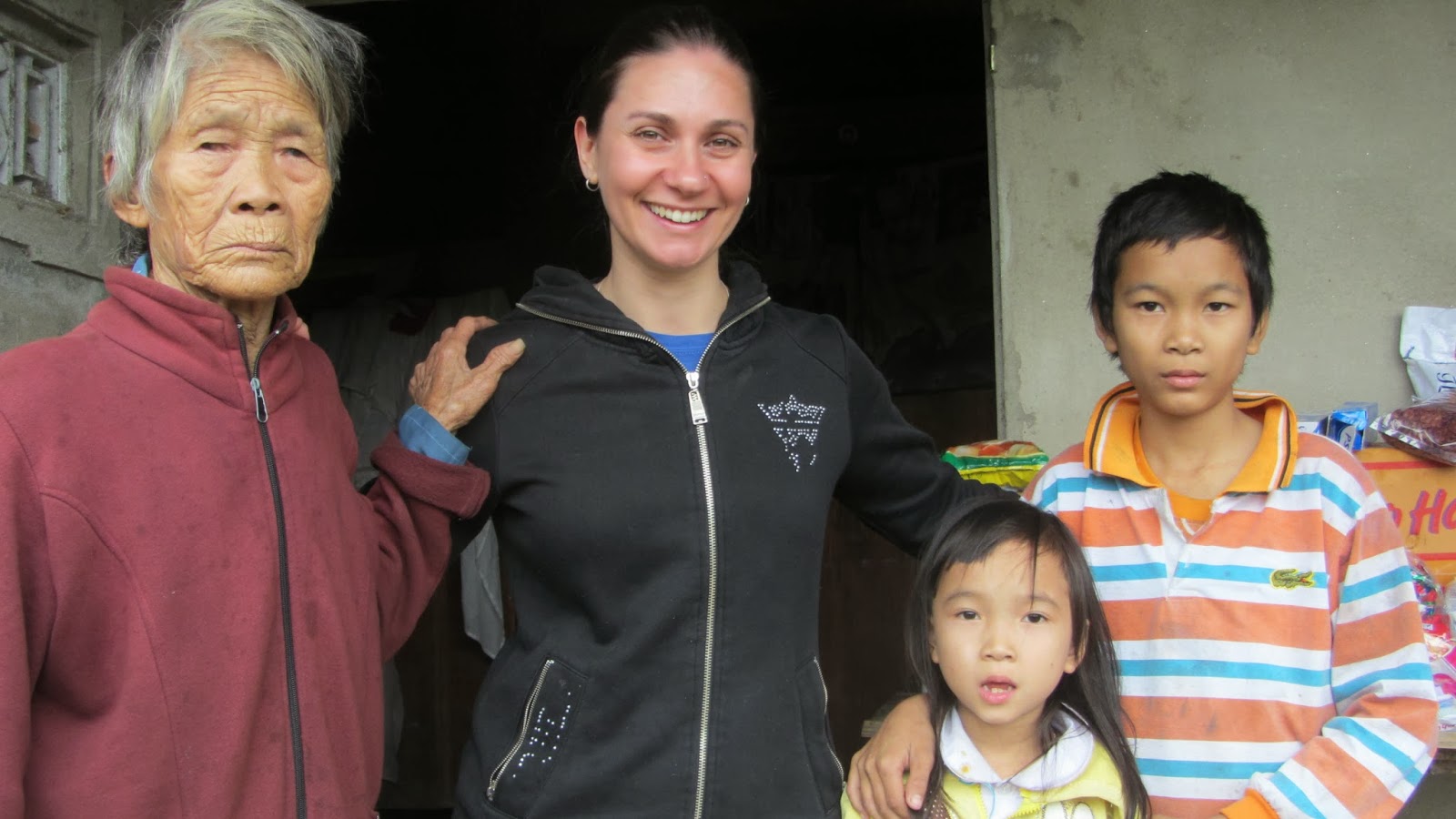 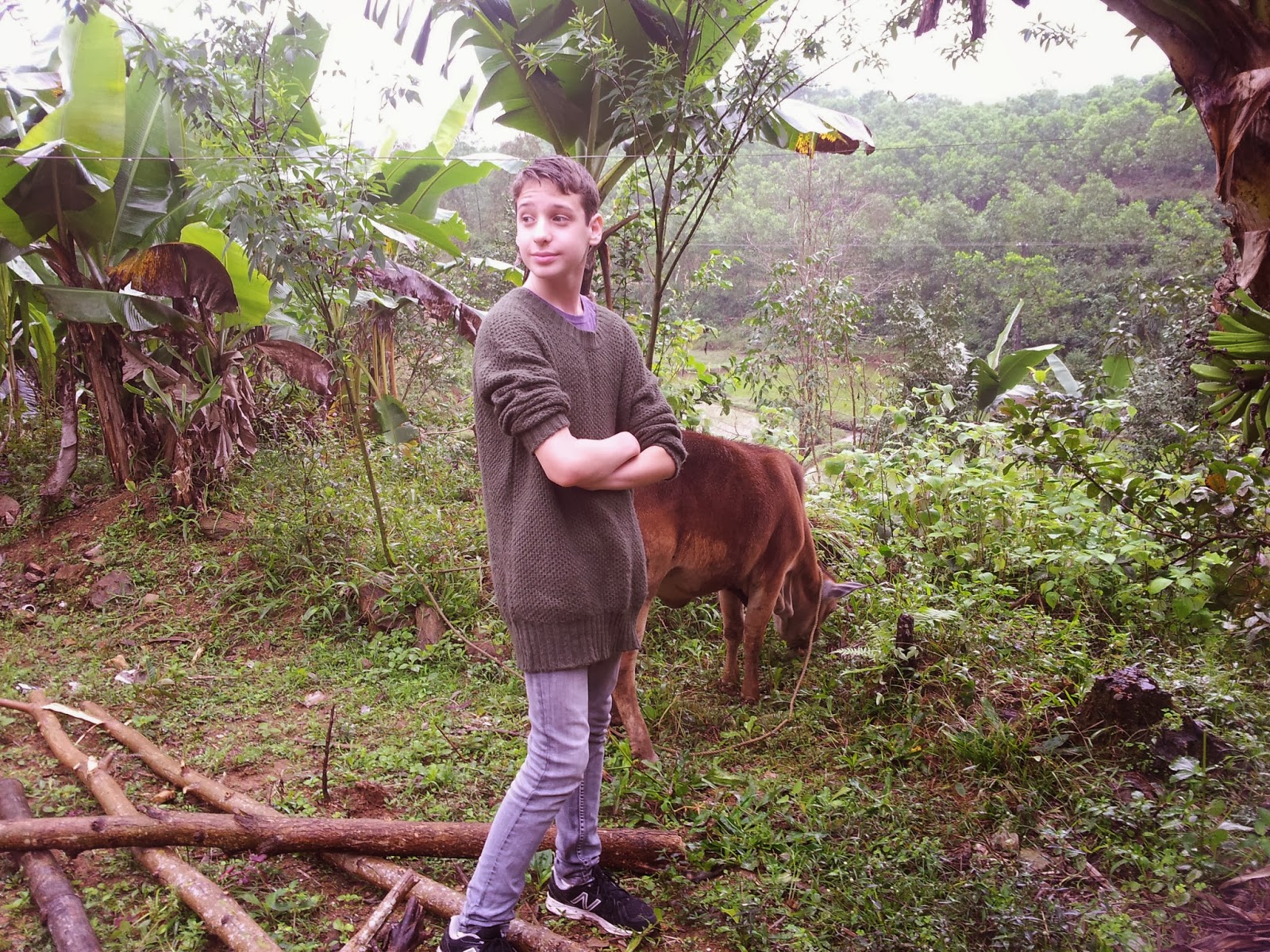 From then on the roads grew bumpy. After a very long drive, we arrived in a town where we stopped for a good 15 minutes. There we were joined by Phoung, the 16 year old girl we have been supporting to go to school. It transpired that the town was where she went to school, so we gave her a lift back to her house/our destination.  After another 15 minutes of jolting travel, Anna and I grew confused, as we rationalised that it was a very long way for Phuong to cycle to and from school every day. After another 10 minutes, we had still not yet reached our destination. After asking Mr Hai, one of the government officials, it turned out that Phuong took a bus to school on Mondays, boarded at school for the week, and returned by bus at the end of the week, on a Sunday to help at home before returning back to school.
We finally made it to our destination, a surprisingly new looking house. In addition to our funding of Phuong's school fees, the local government had built her family a new house. A section of the old building sprouted off the new house like a growth.
In this older part is where we found Phuong's 2 hemophiliac brothers.  The younger boy, 11 years old, lay in a hammock. The older brother, 23 years old, sat on a wooden bed. Both wore expressions of extreme boredom. The younger boys knee was bandaged up whilst the older boys knee was swollen to the size of a volley ball. Still the officials forced them outside to pose for their bloody photos.  The older boy managed on crutches but the younger had to be pushed out in a wheelchair. 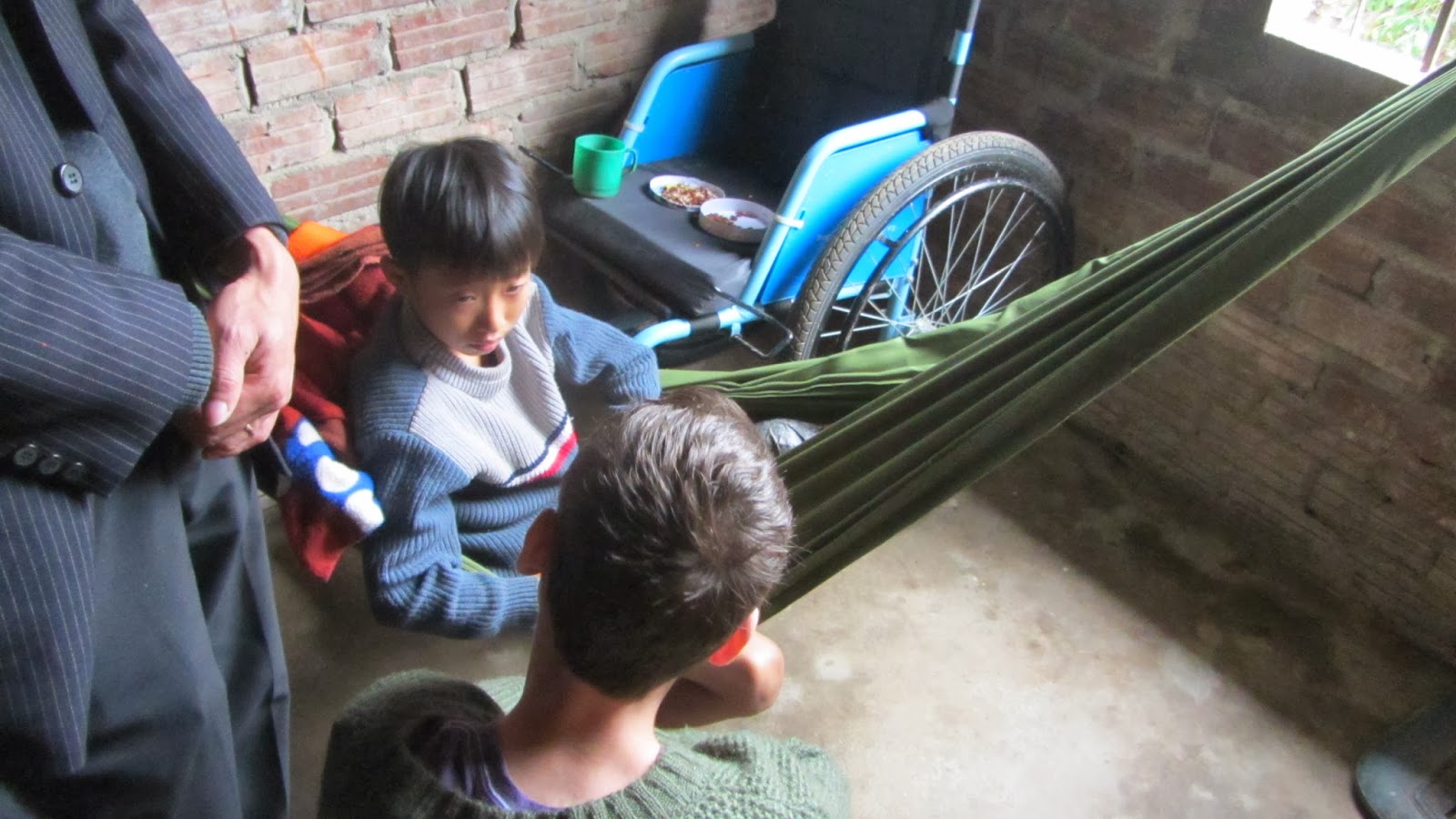 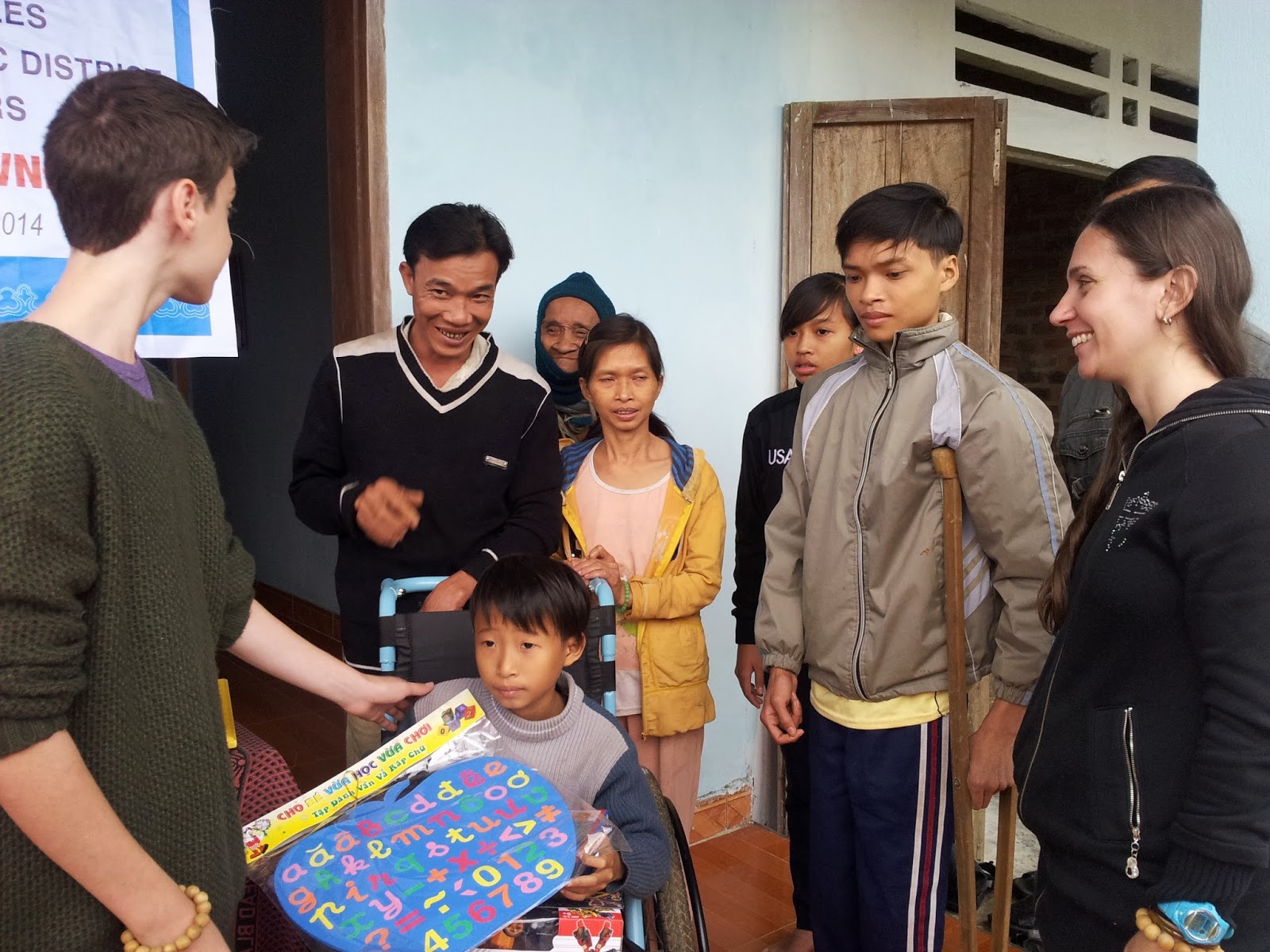 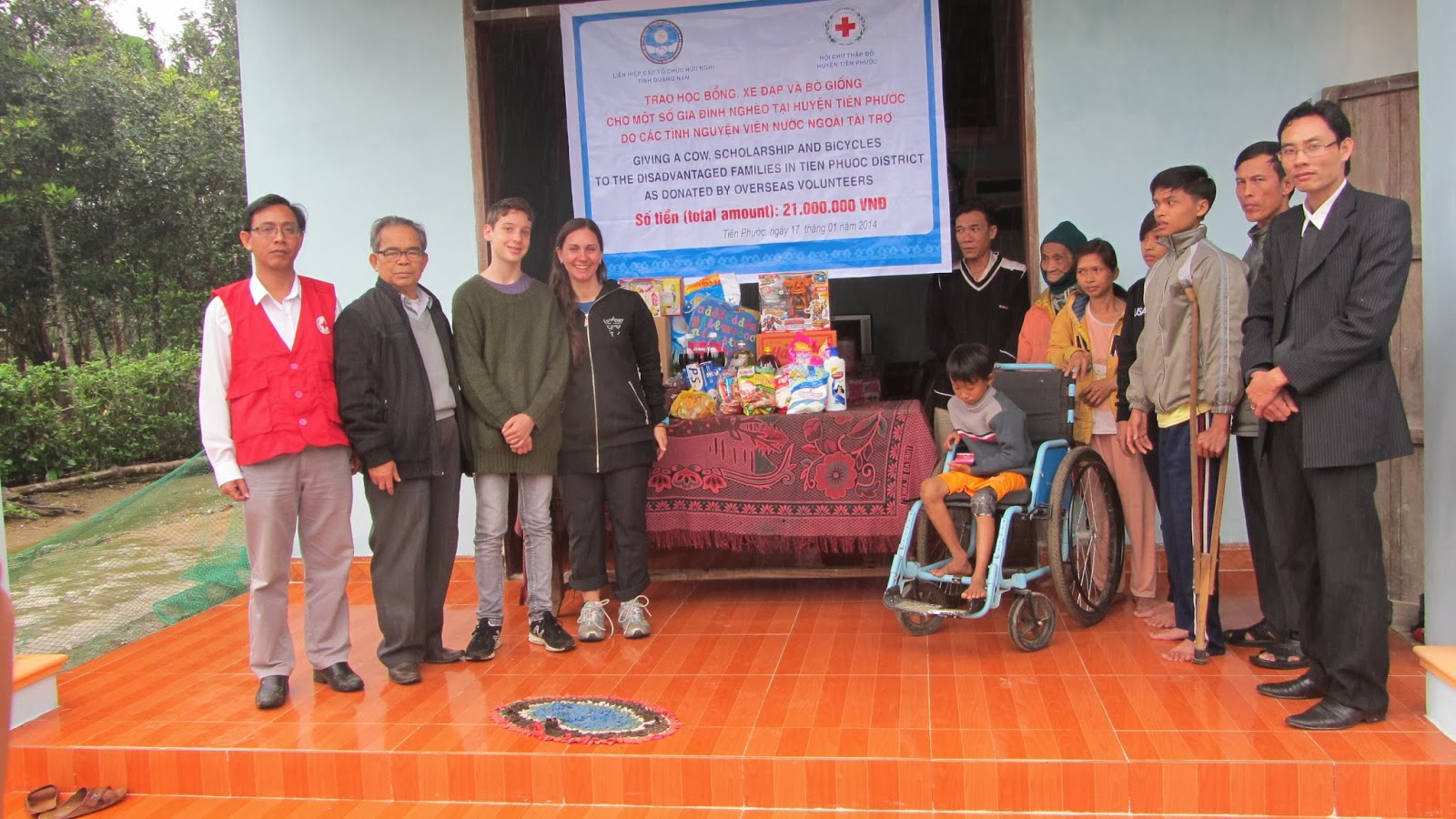 Even after giving the younger boy the toys, no smile was forthcoming to his face. Phoung showed us her school results which a translator told us were very good. When asked what she wanted to do after high school, she told us she wanted to go to university to study banking. Anna kindly gave some money to an elderly women who had wandered over from the next door house.
As this was the last family, the officials presented us with heart of gold certificates and lucky bracelets. 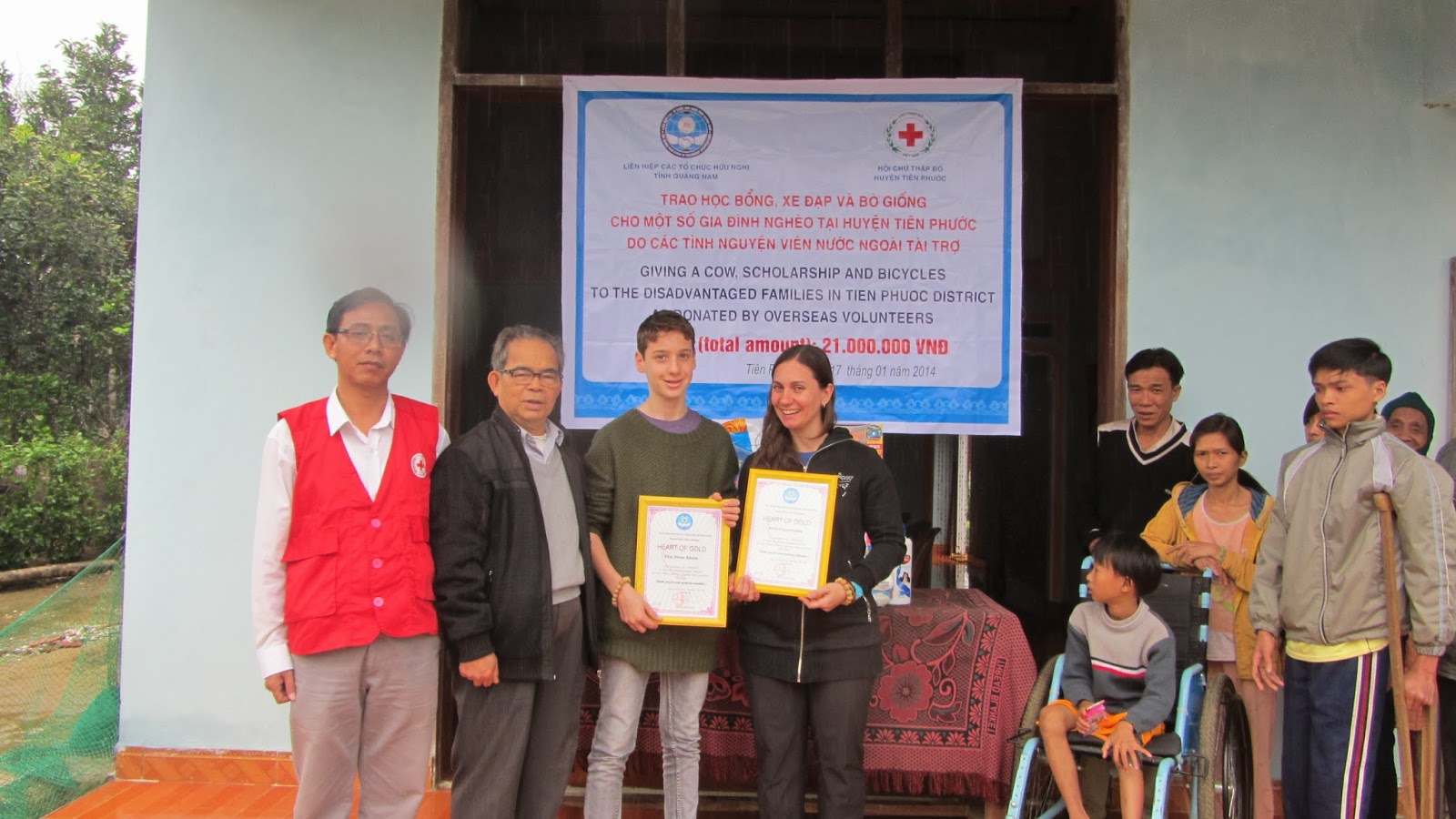 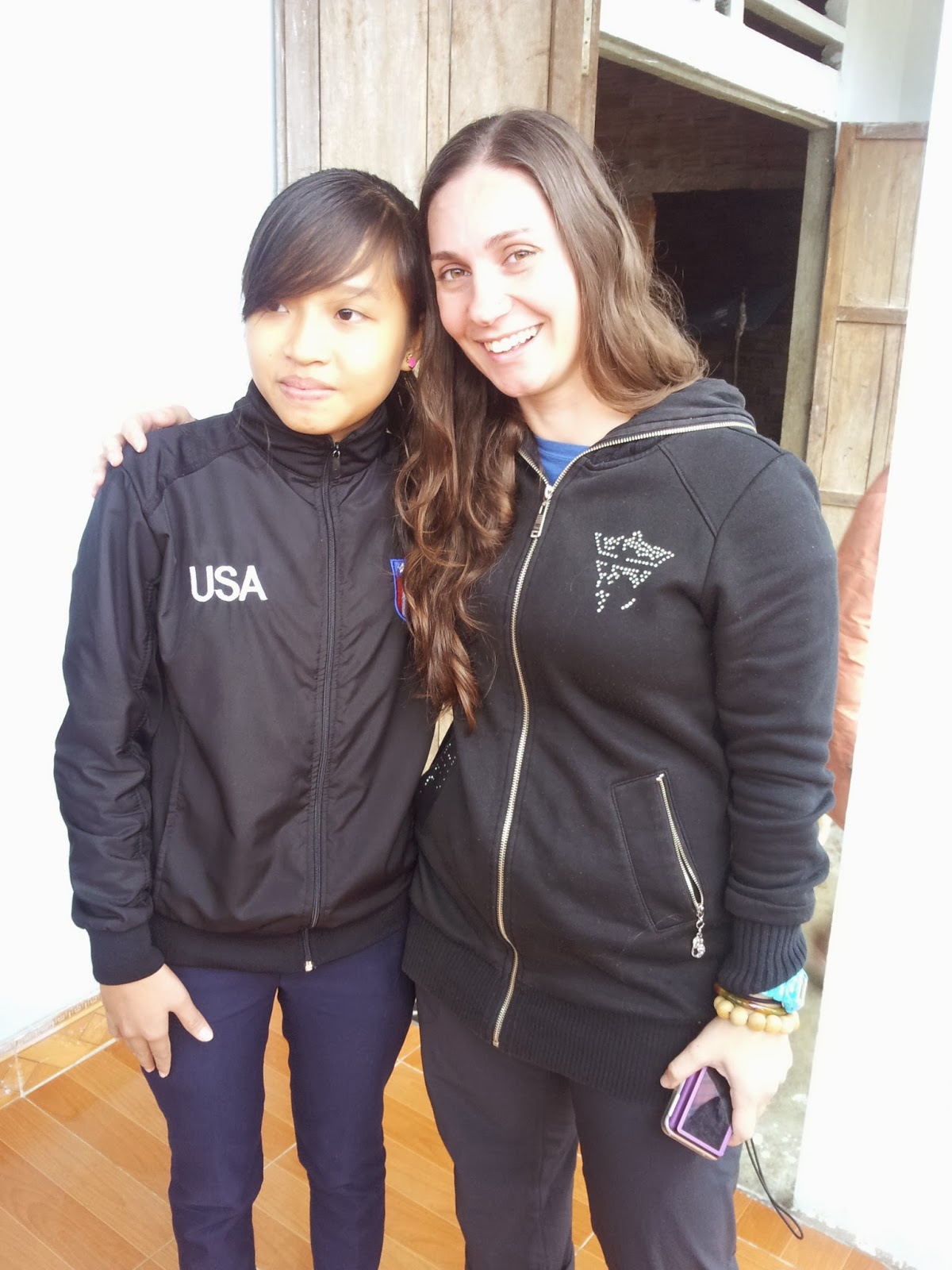 Standing outside the house of this poor family the gesture only served to make me feel sick. I could not understand why even with this great new house, the boys still stayed in the dark rotting room of theirs. This family served to remind me that even though we help in the ways we can, sometimes things can't be helped. I left the third house feeling almost the opposite way I felt leaving the second. You have to pick your battles, and so when I think back on our journey throughout Tien Phuoc, I choose to focus on the second family, and the smile on the little girls face. 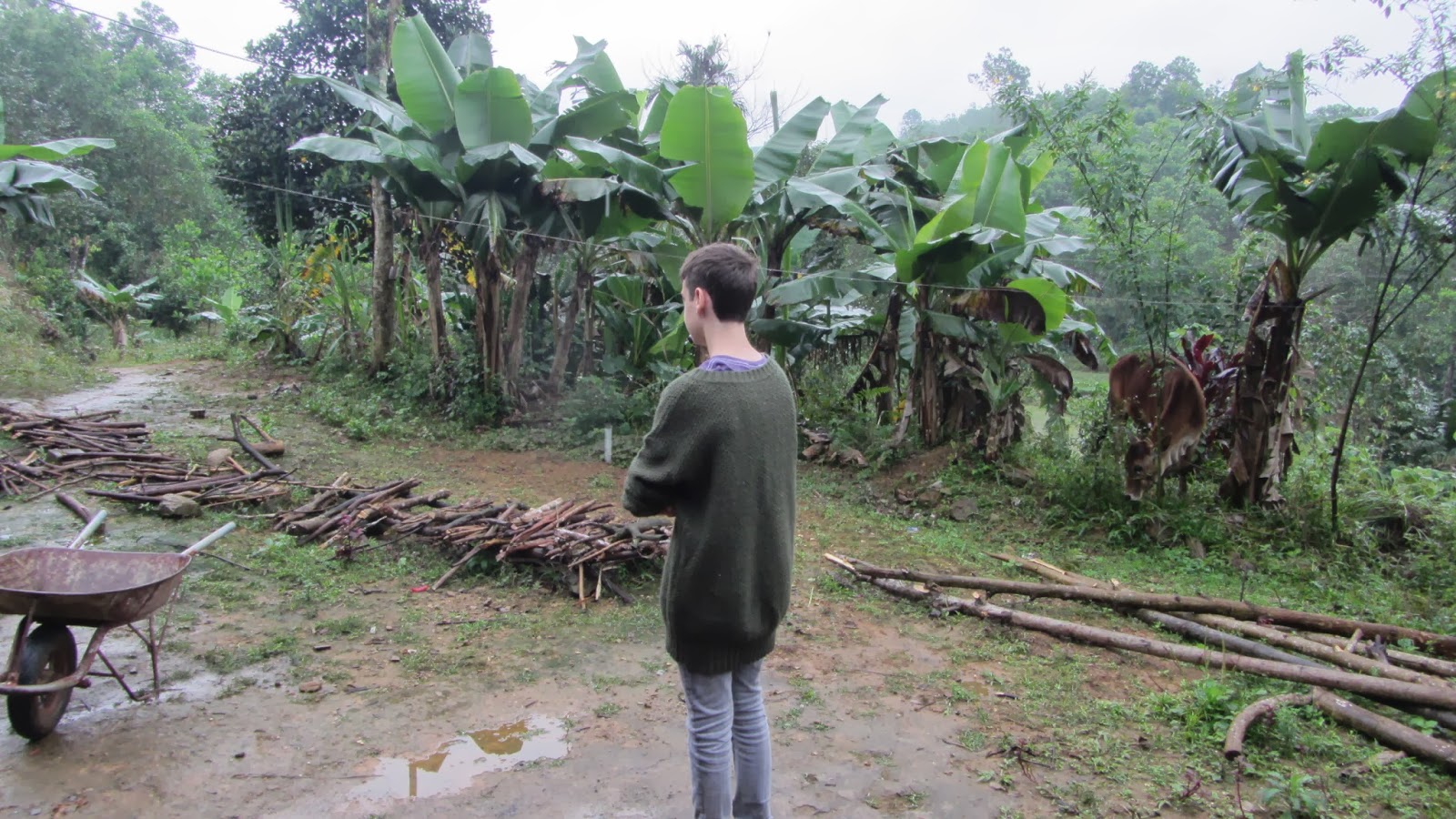 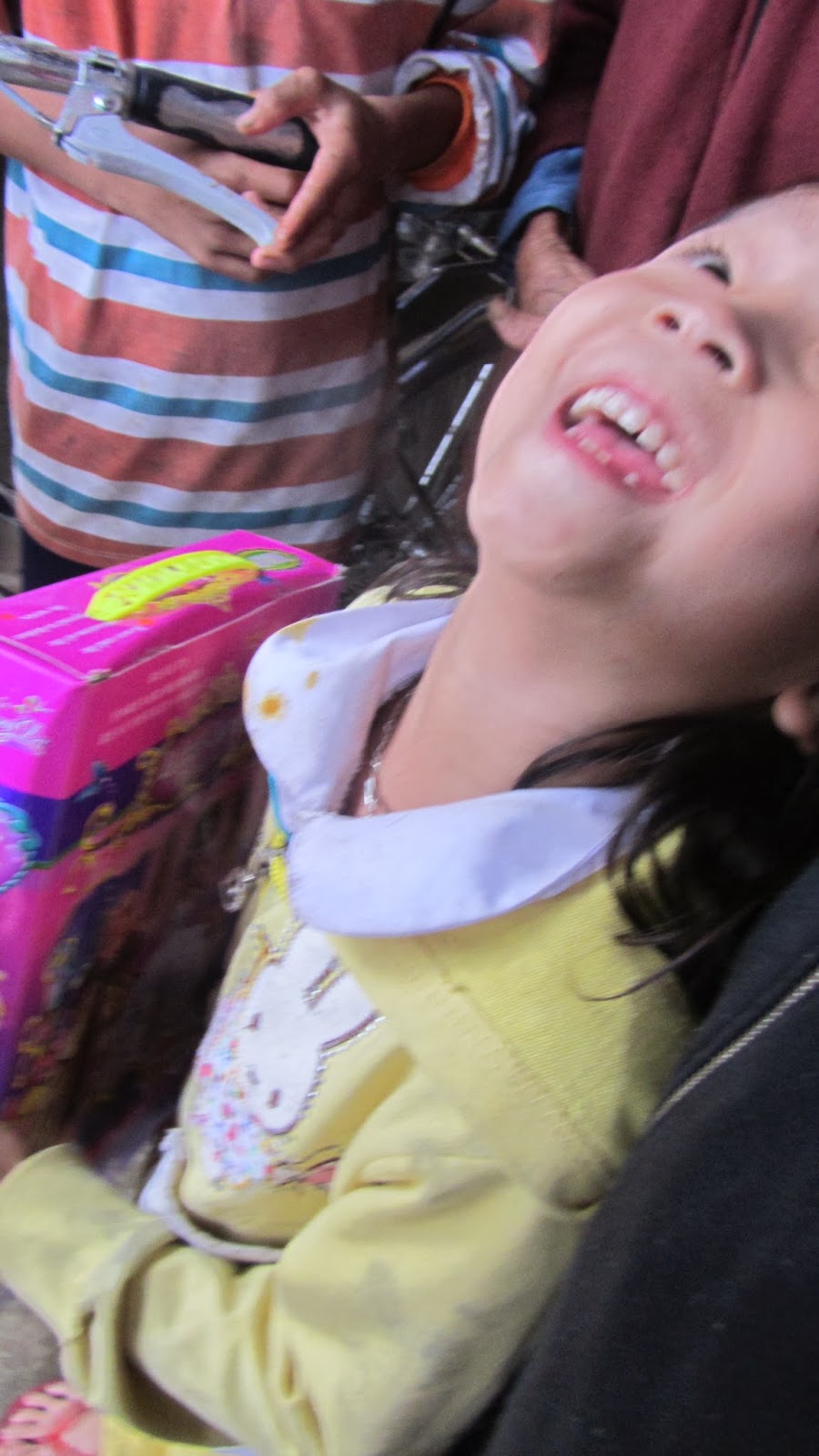 Posted by Anna LittleShoe at 10:47 PM