"Don't cry because it's over. Smile because it happened." – Dr. Seuss


There was an eerie energy in the air.
Tam Ky had its first big stormy, rainy night for December. Even the heavens knew I was leaving and let the clouds out for the occasion.
My final night in Tam Ky, the girls begged me to sleep over at the orphanage. Although 'illegal', I asked the Director and she consented.
I walked into the orphanage with my pillow under one arm, big bottle of water and a backpack full of goodies.
As usual, some of the children playing outside saw me, began yelling out 'anna' and ran towards me. They took my pillow and bags and guided me to the girls dorm. There was a heated discussion as to where to place my pillow, as this would determine where I was going to sleep.
In the end, we settled on Thanh's bed and my pillow was neatly placed aligned next to hers.

I felt like I was in a dream and floating through.... Was this is it? My last night with the children? How has this happened?!
The boys came up to me and everyone was aware I was leaving the next day and there seemed to be a strange vibe... I cannot describe it; the boys all wanted to be around me and so at one point, in the girls dorm, we had about 45 children in there! 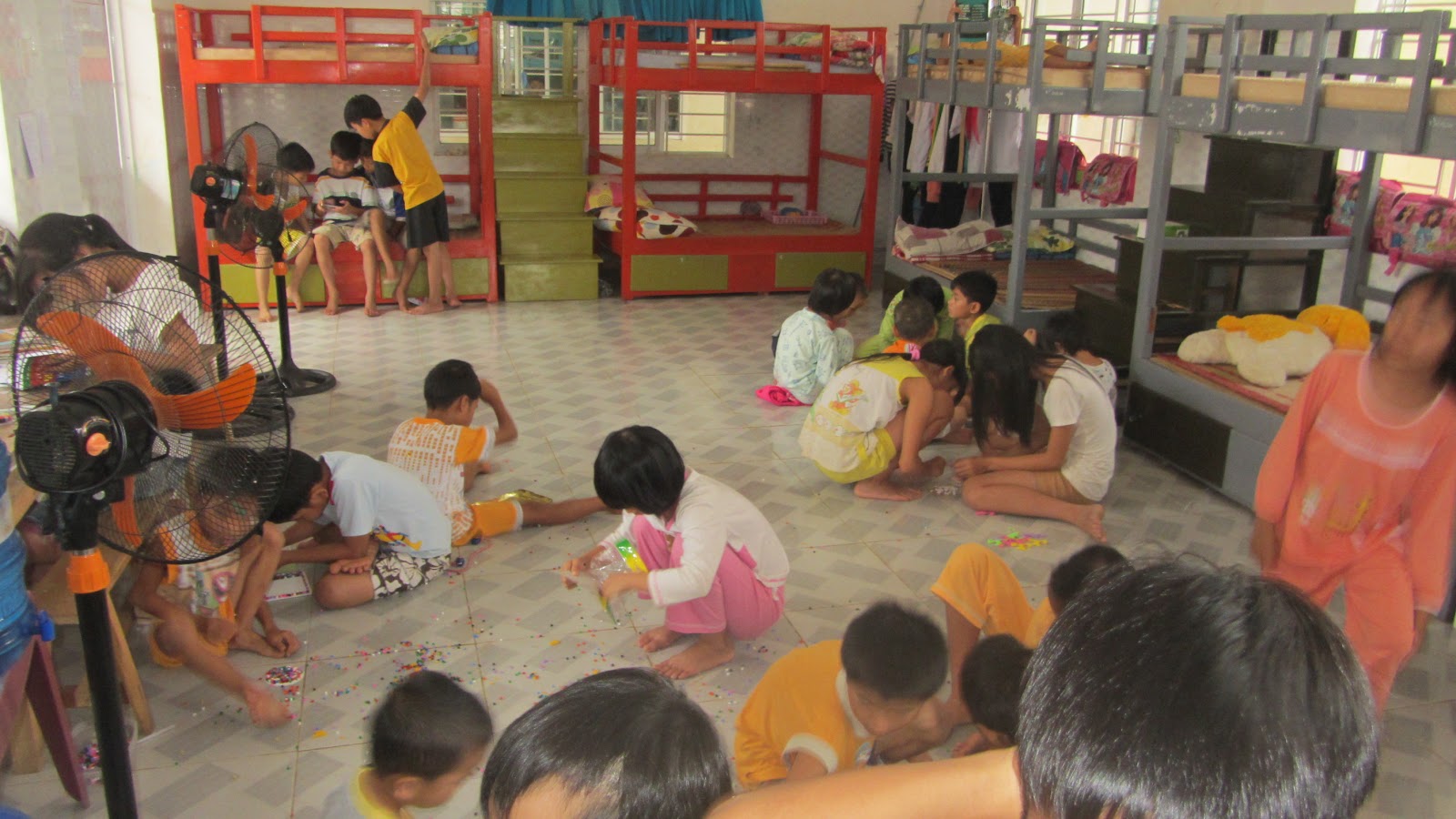 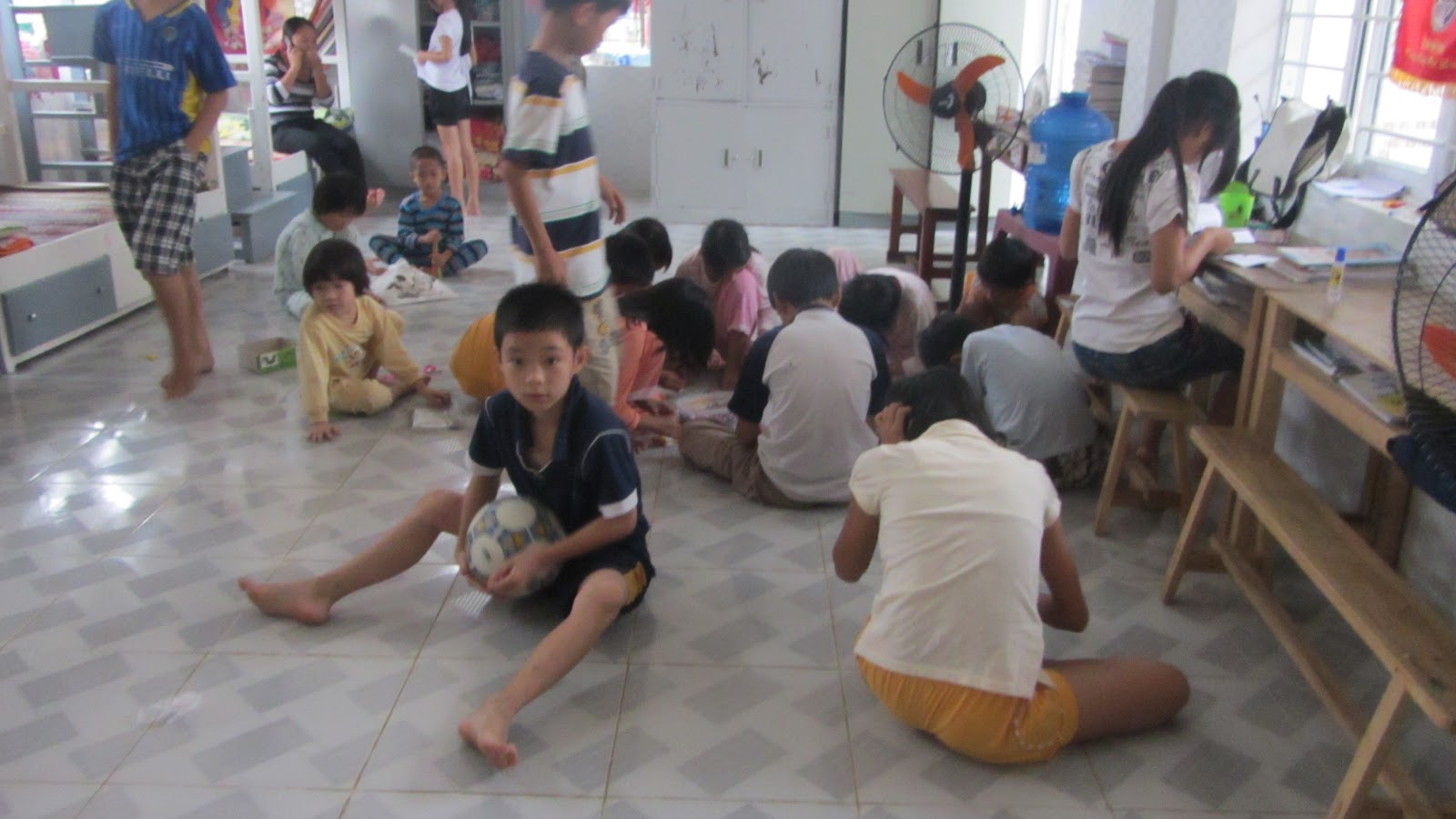 I set up different game areas and they had an awesome buzz going as they all cooperated, played games, made bracelets, arts and crafts, read comics, coloured in pictures, put tattoos on themselves and made xmas cards.
I had to write out 35 carer cards for their Xmas Tips and Ngan, Tram and Tuyet (oldest girls) sat patiently with me and wrote them all out in Vietnamese and English! 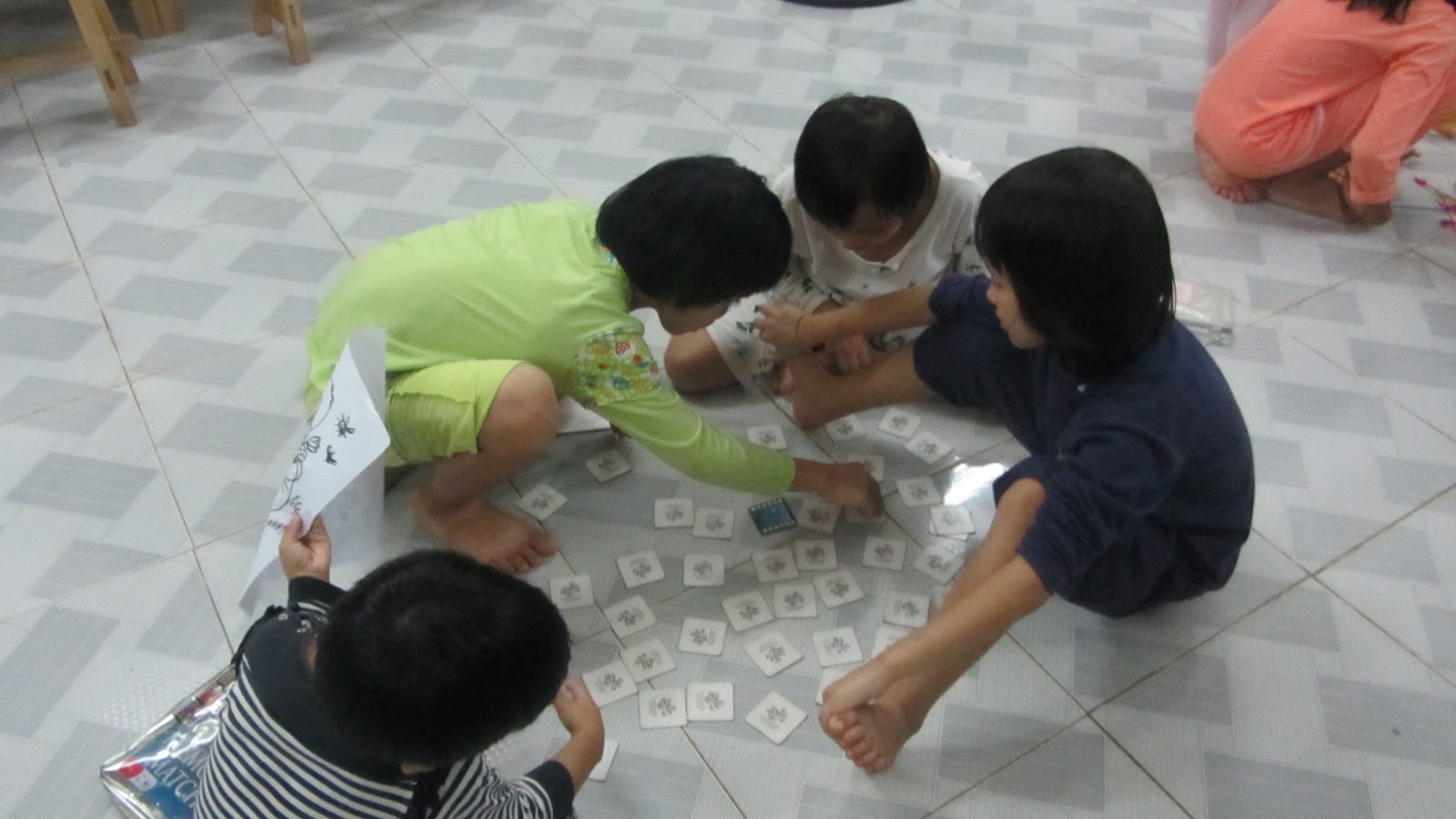 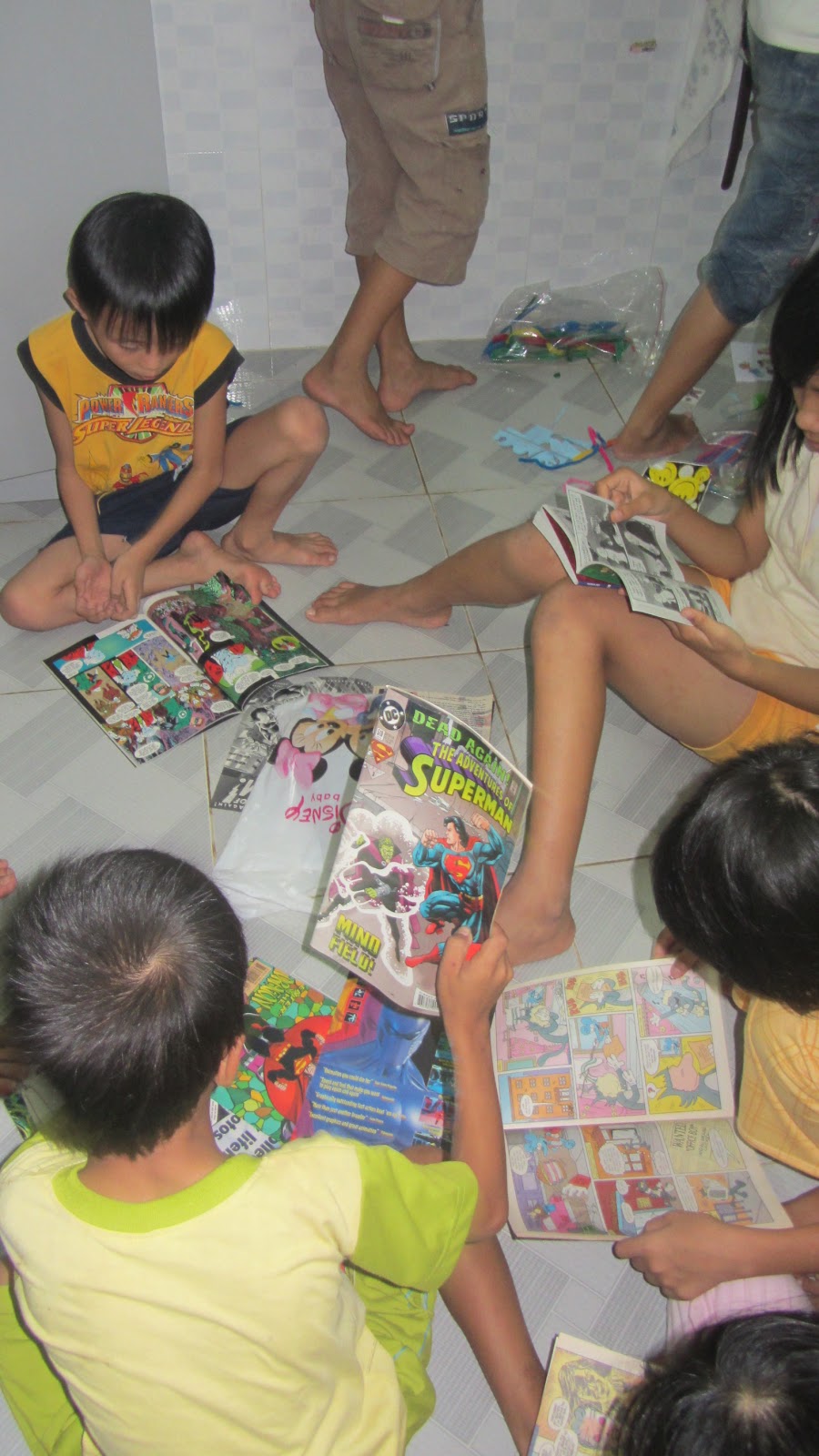 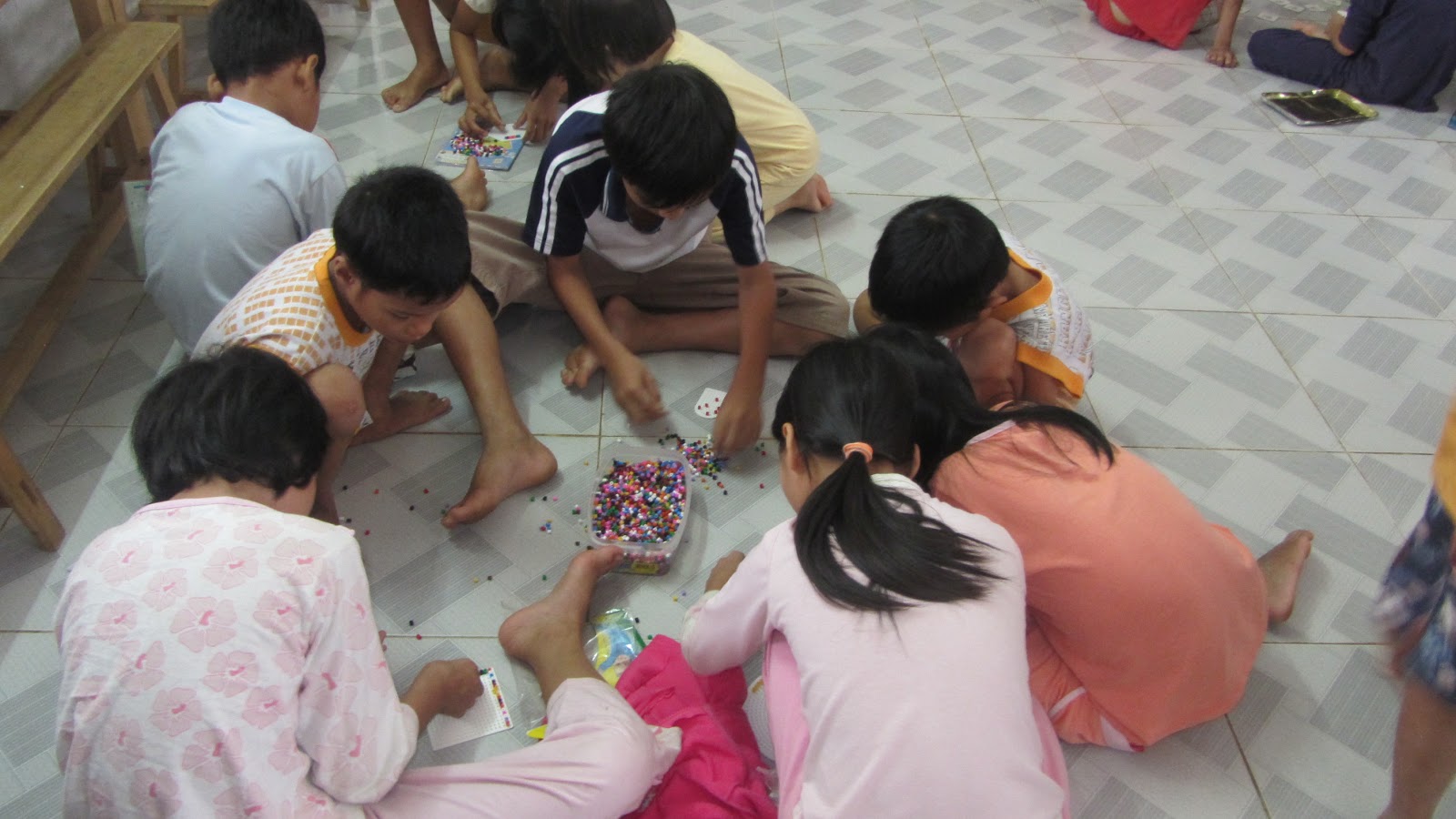 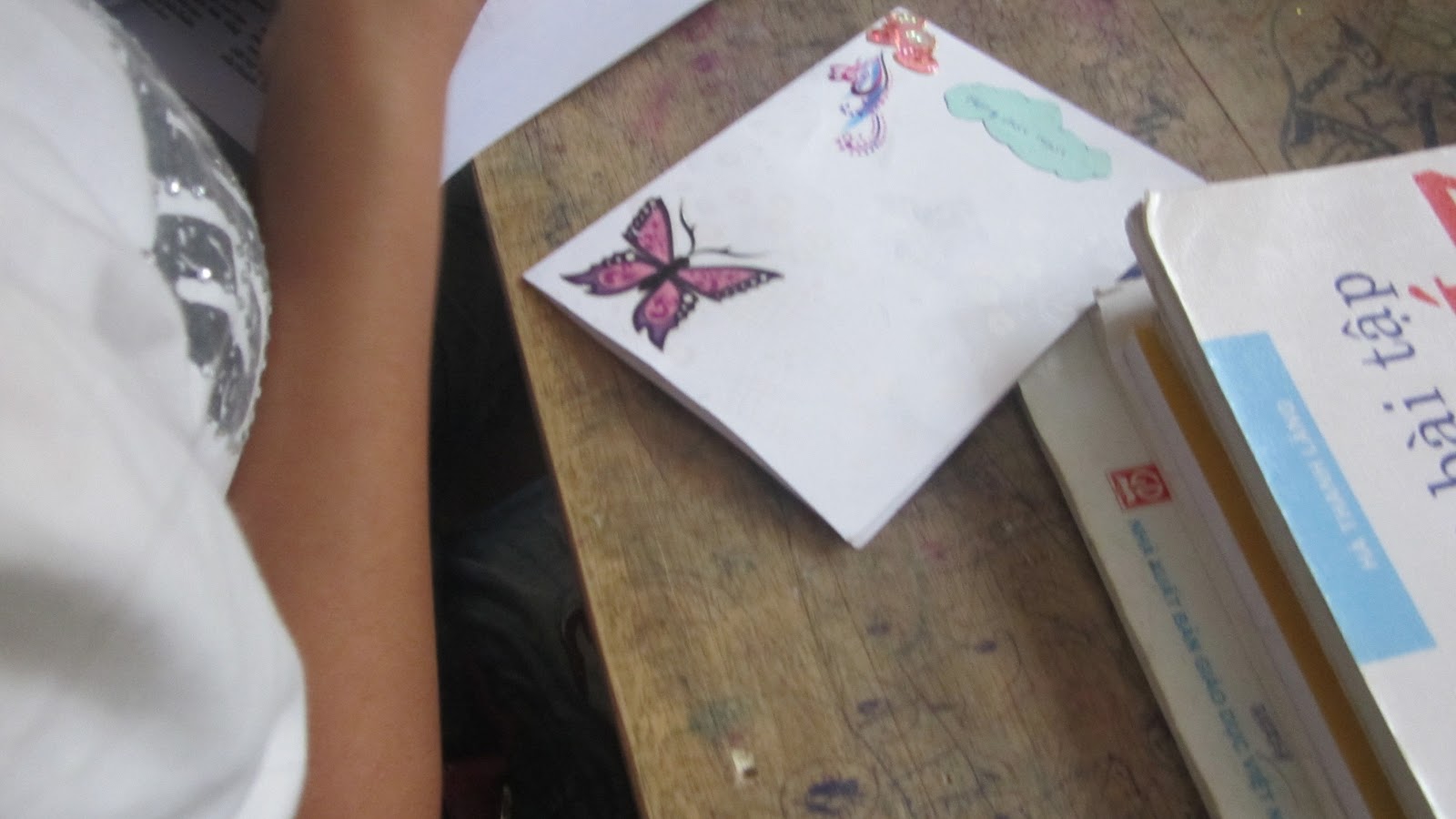 Most of the children gave me a card each and some bracelets they had made, random toys and things they have collected along the way. Even Duc and Dung, the two oldest boys here who are about 13 years old and play it very cool gave me a card and told me "I miss you". They stuck to me like glue all night, just following me around, threading their arm through mine as we walked around the rooms.

I gave the 5 oldest girls and 2 oldest boys some money in a hush hush way as a goodbye gift. Thanh refused for 5 minutes and began crying when I tried to give it to her. She kept saying no, no no. She hugged me and I told her it would make me happy and if she didnt want to spend it on her, to keep it and buy something for her brother or sister. or give it to her Grandma next time she saw her. It was $2, but I can imagine it would have been like giving them a million dollars. Tram refused as well until I made her take it and she was squeezing me. And the others had no problem taking it from me! Phuong's eyes went really wide when she saw the 50,000 note.....

It was interesting being at the orphanage at this time and watching their routine. They eat dinner at 5pm and at about 8pm boiled potatoes/yams and taro came out where they got one and munched on it.
They had to be in bed at 9pm and about 8.45pm, all the mosquito nets came out and everyone set up their nets around the perimeter of their beds and climbed in. 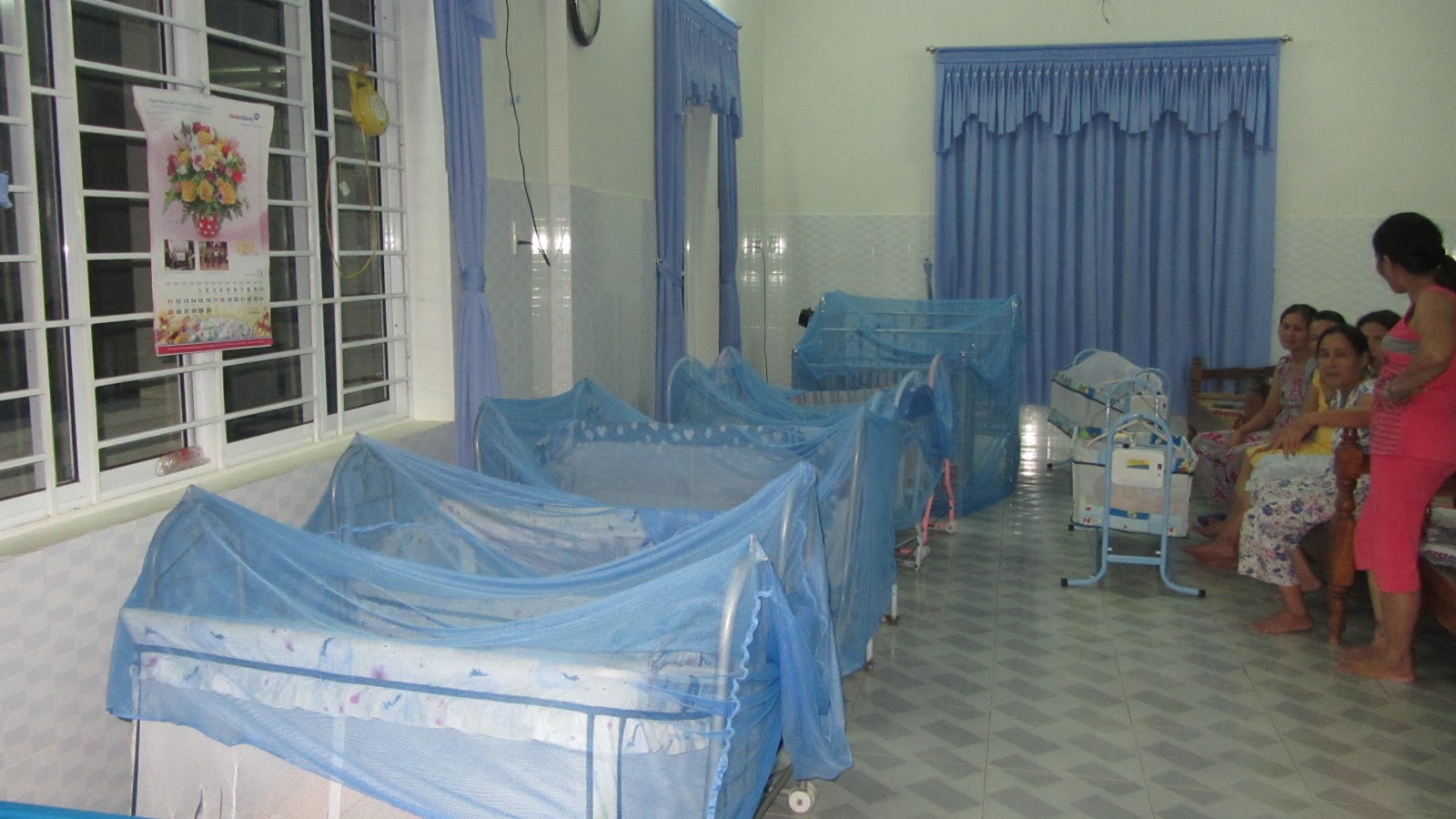 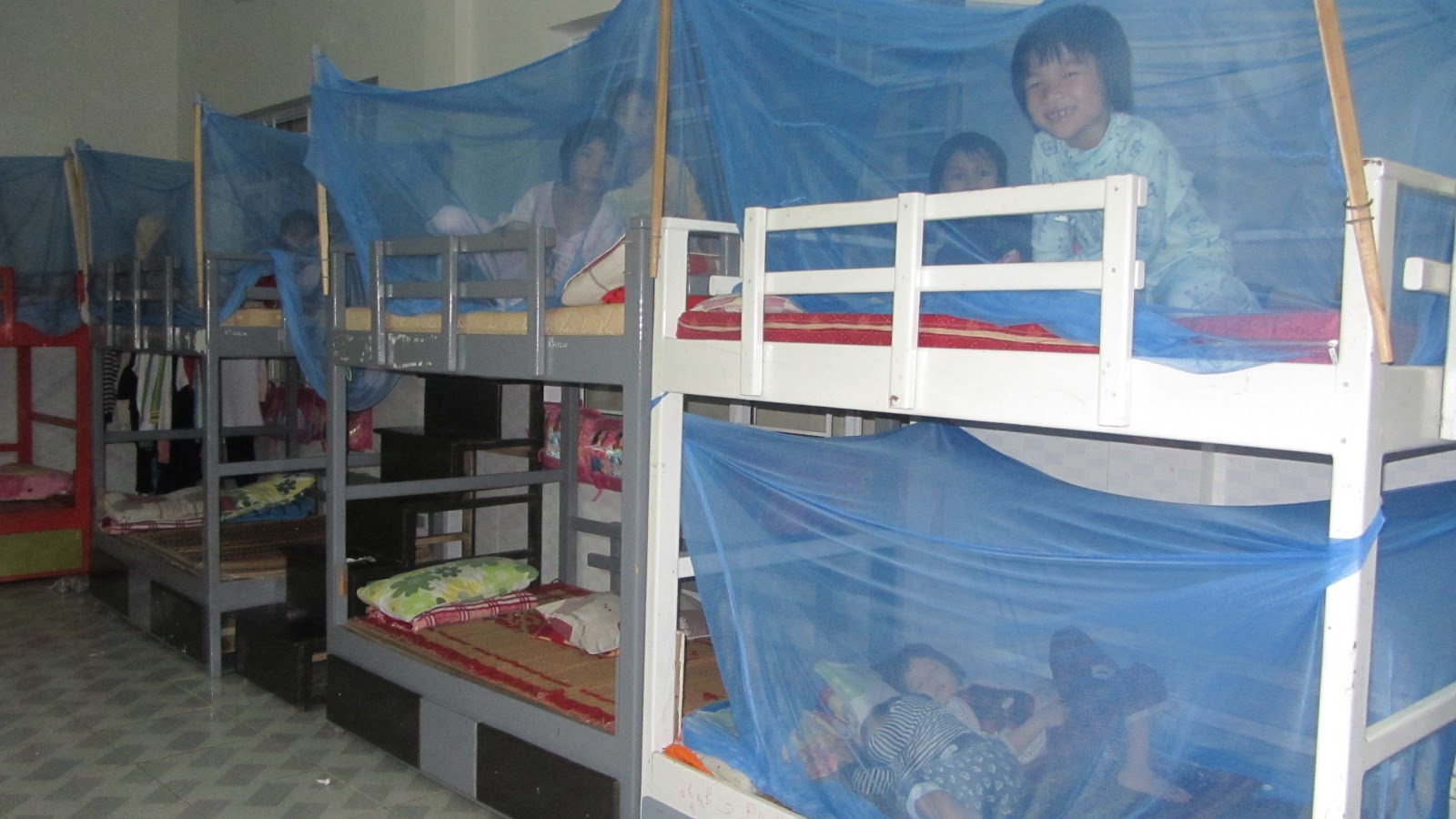 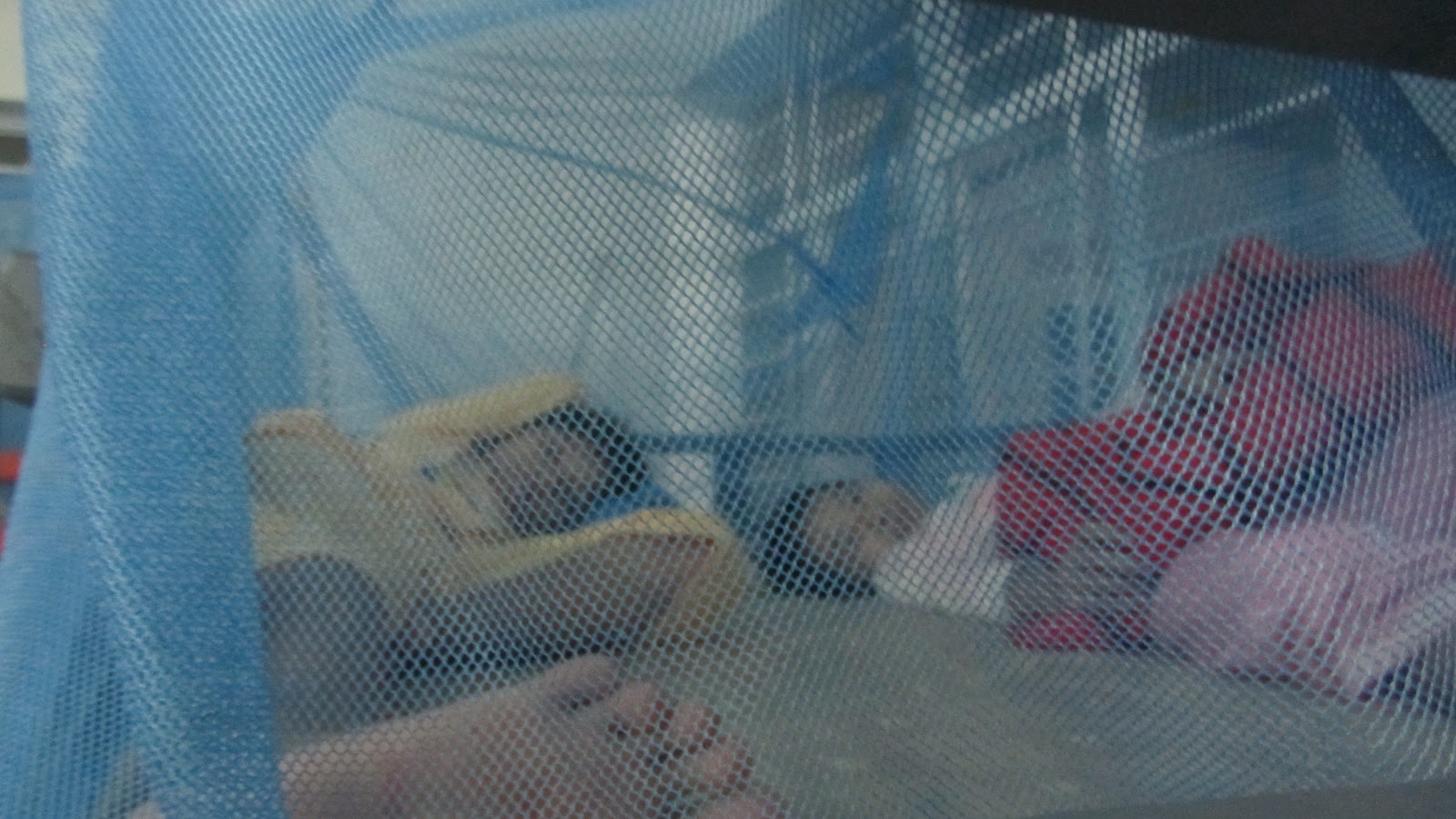 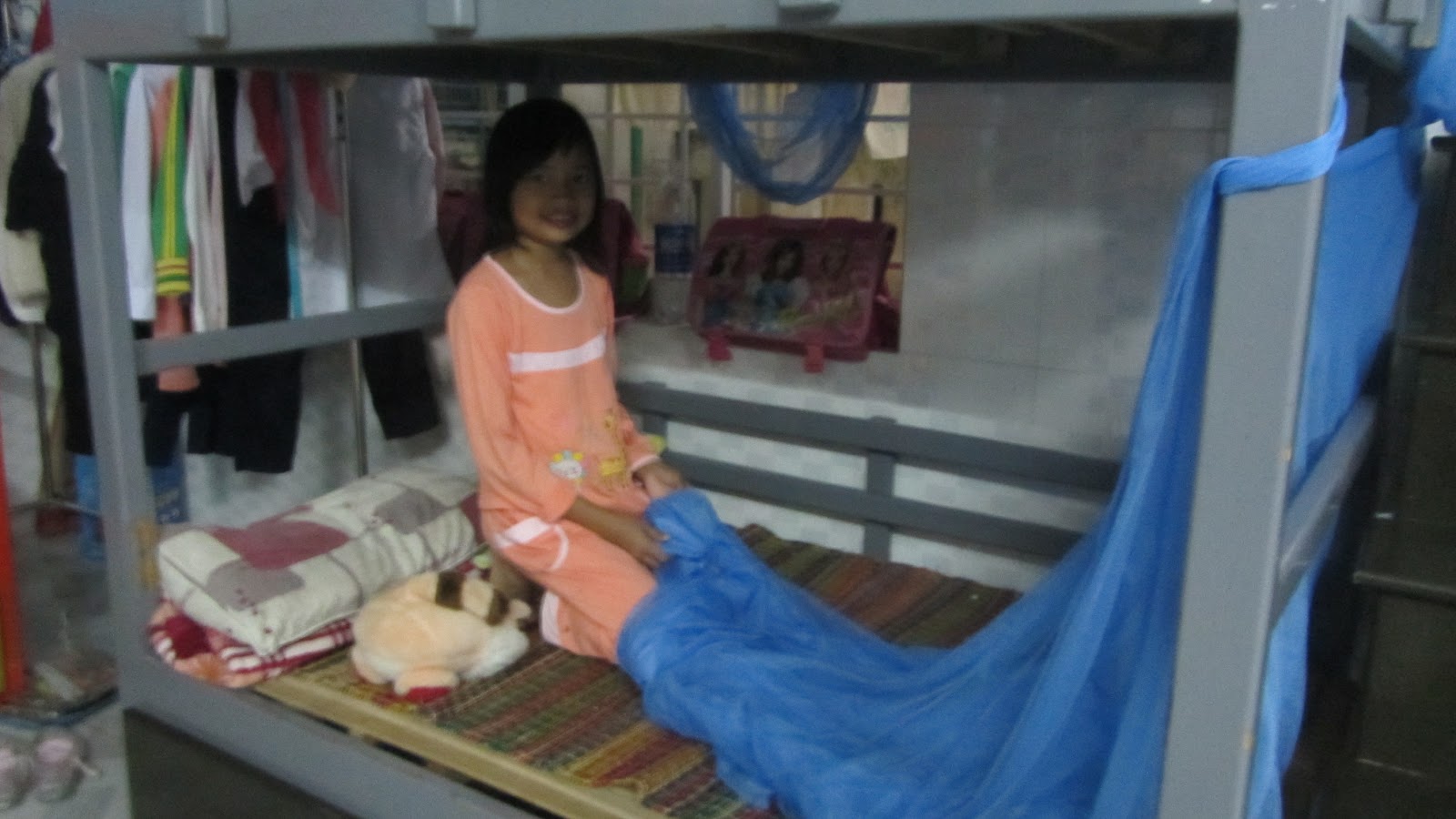 It was just so exciting that I was there that we didn't actually get to bed till 10.30pm.

Thanh and I lay on her small wooden bed talking. She was getting upset I was leaving and asking me questions about what I was going to do when I got home. She knows I am facing some challenges when I return and she was so concerned for me. Slowly, slowly, I could hear the girls drifitng off... the chatter dies down, the creaking of the wood ceased as they stopped tossing and turning. The two girls above us shook the entire bunk everytime they moved, so I was awake every 20 minutes!
Gai was then sick and vomited everywhere, so the poor mother had to get up and clean up at 1am. Lights came on, talking in normal voices went on and most of the girls didn't even stir. I could hear the babies crying one after another at different intervals and could hear the carers getting up every so often. Woah! This was hard.

I do not know how they sleep two to a bed... you can barely roll over. I was conscious of Thanh all night and literally had half my body on the ledge, as I wanted her to have her room and at one point in the night, she rolled over, mumbled something in her sleep and leant and cuddled me. I was laying there fighting back tears.

So, lights came on at 5.30am for wake up! They all turned in my direction to see if I was awake and I was and waved at all of them as they smiled and said good morning! They brushed their teeth, splashed water on their faces and my last day had begun....

As soon as the boys were up they came running in to see me.....I set up some more games and activities which kept them entertained for a while... 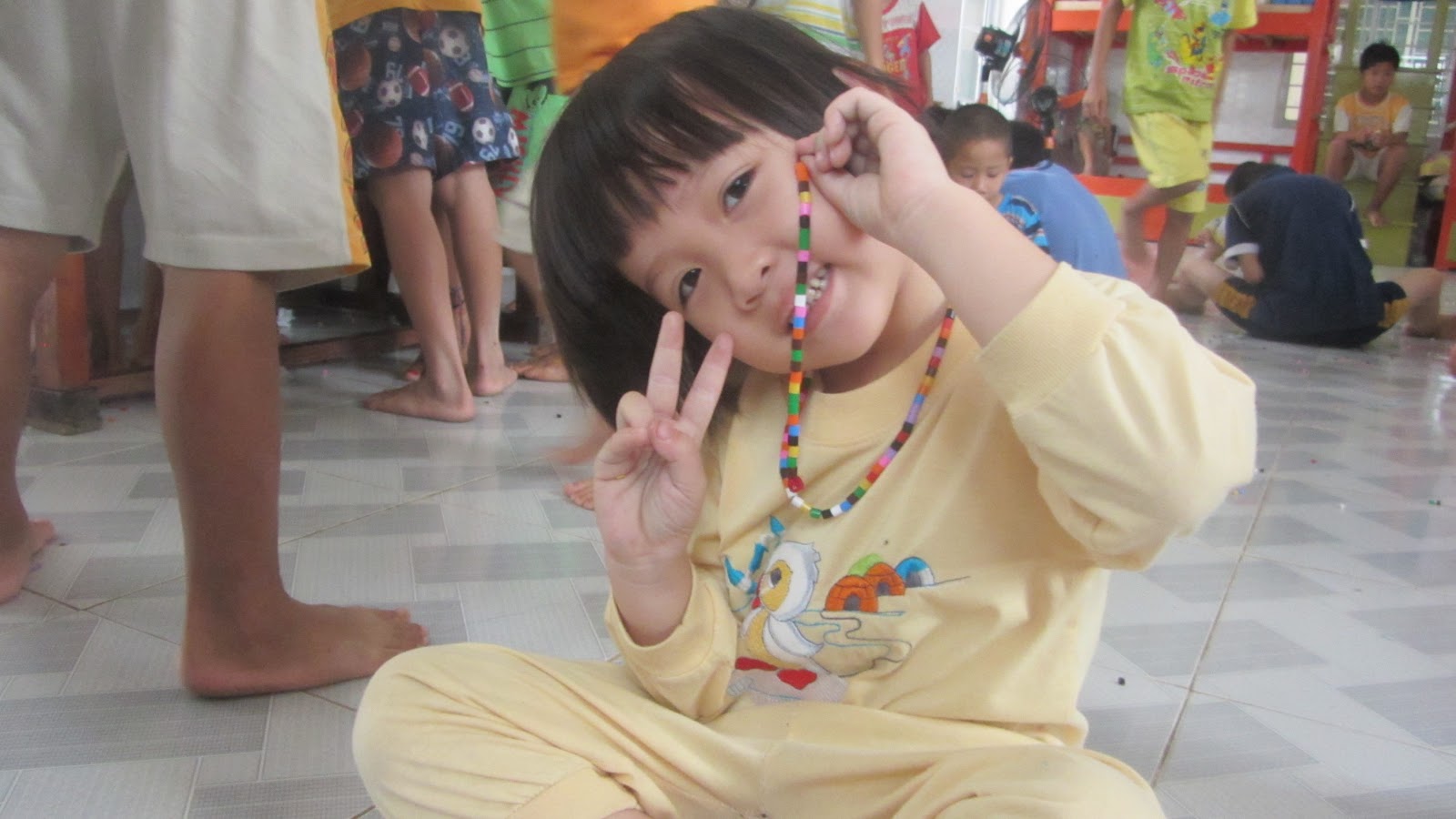 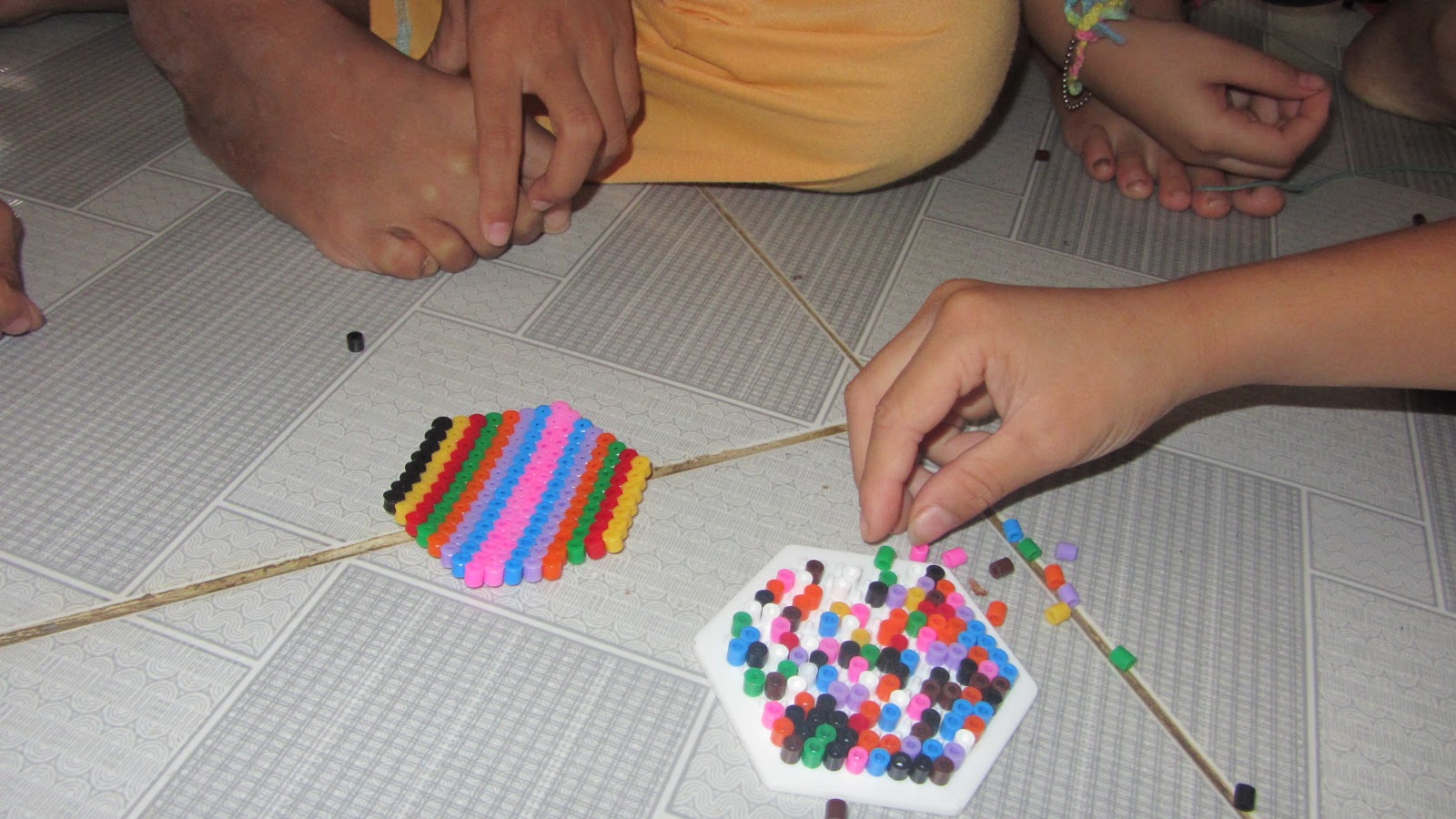 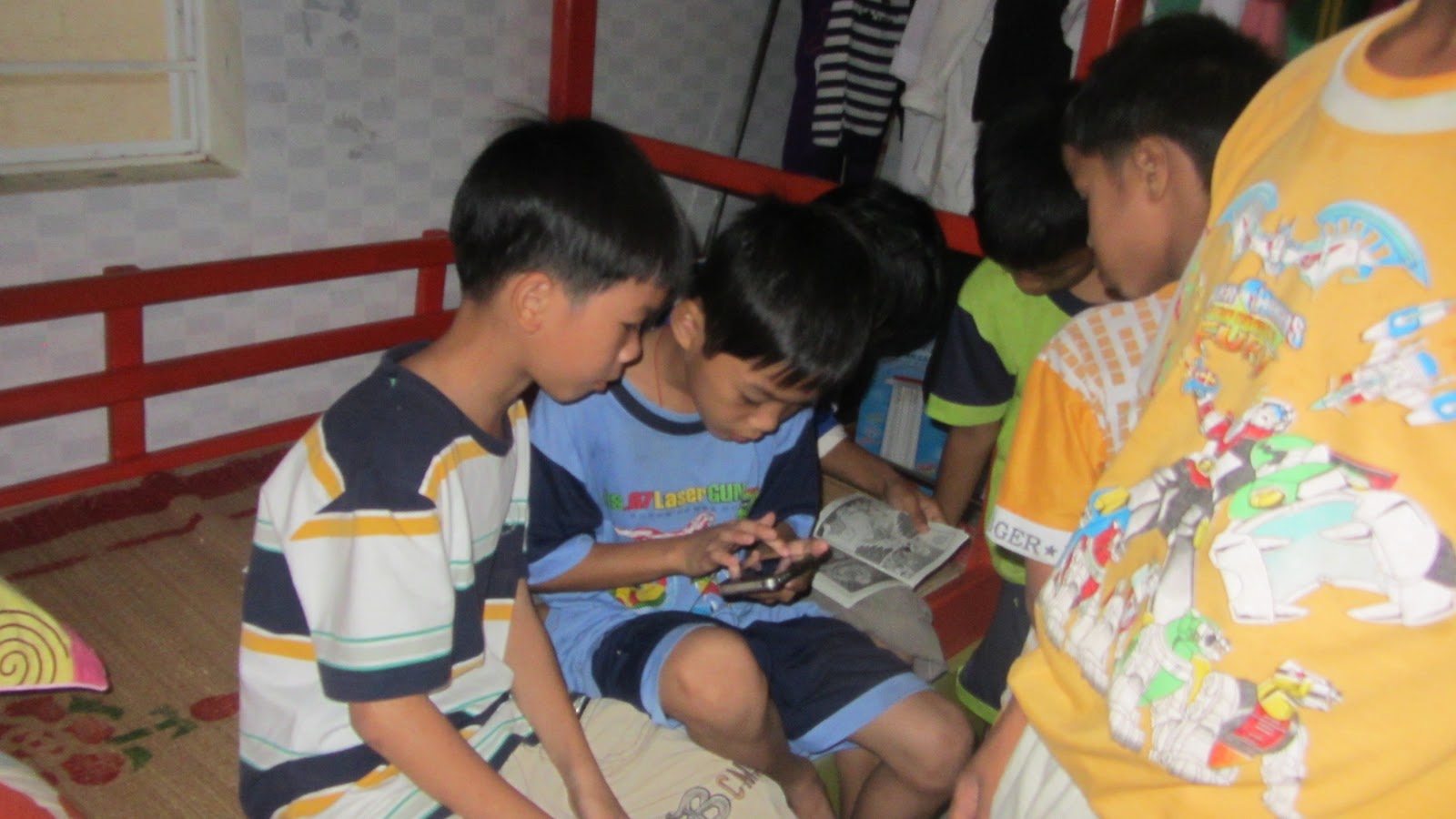 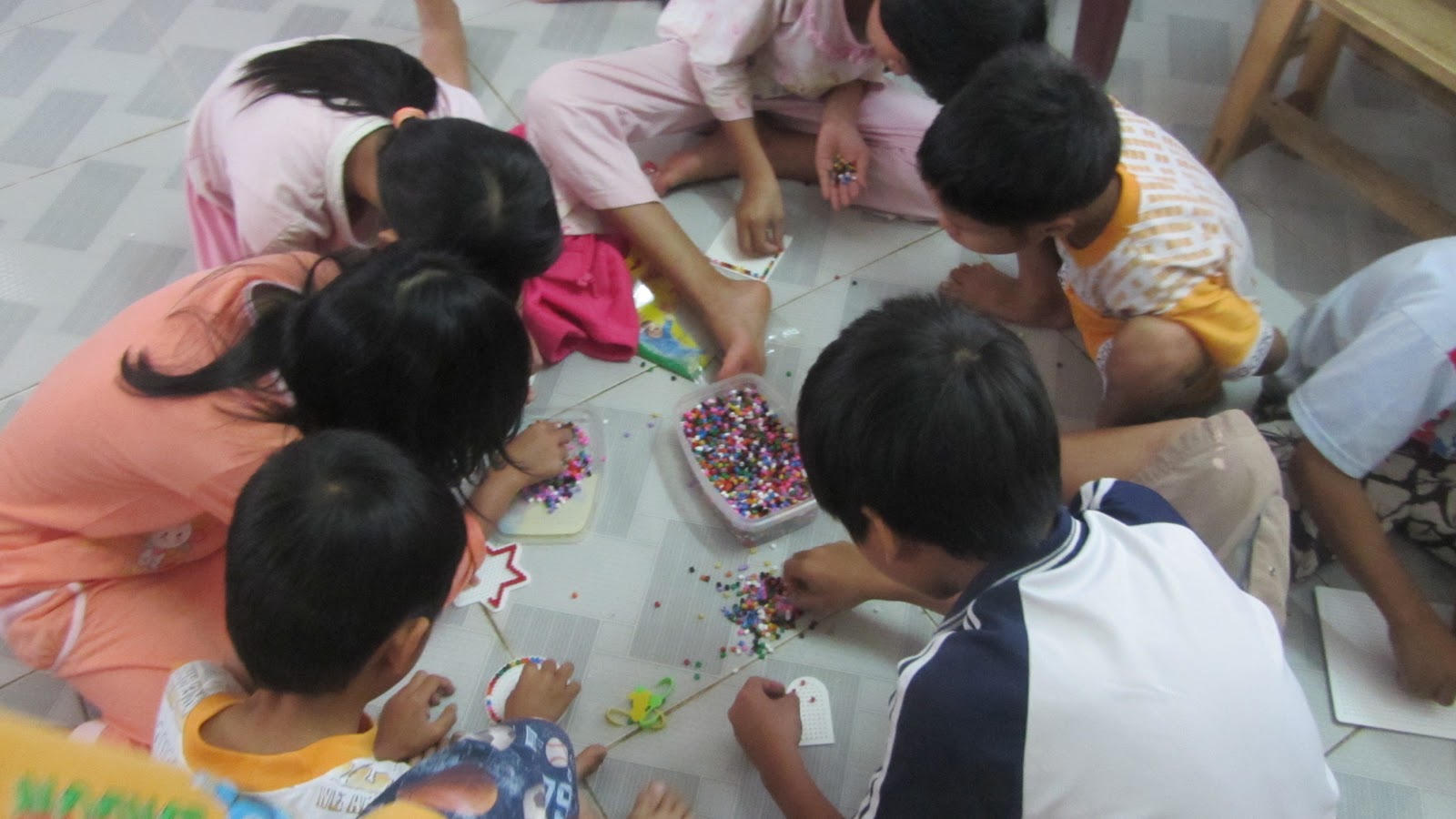 They kept asking me what time I was leaving and I told them 10.30am..... the energy was as heavy as the weather. It was pouring with rain which I found quite poetic.

I left at about 9am and went to Peace Village to say final final goodbyes. Truc understood I was leaving and he held onto me so tight saying "No" every time I tried to let go and move on.
Son shed a few tears and said he was going to miss me. He kept squeezing me and kept pulling me into him for a hug. The carers were in tears and they all stood at the entrance waving at me until I was out of sight. I tried to keep it together whilst saying goodbye, but a few tears escaped. When I turned the corner, I let a few more tears escape. And by a few, I mean a lot.
I walked back to baby orphanage and I must have looked a sight. I could not help but think how this will be the last time I would be walking down this dirt road. That it was the last time I would get all these 'hello's' yelled out at me from the locals, the last time I would have to wait for the water buffalo to cross over for me to get down the little street that led to my other 74 angels.

Some of the older boys were out playing in the field with the neighborhood kids when they saw me walking back up to the gate. They all yelled out and ran up to me and came back with me. I found this poignant as all year, I would see them but they would not run back to me; they would stay and play. Today, I think the reality and intensity of my looming departure, made them come back and spend this final hour with me. 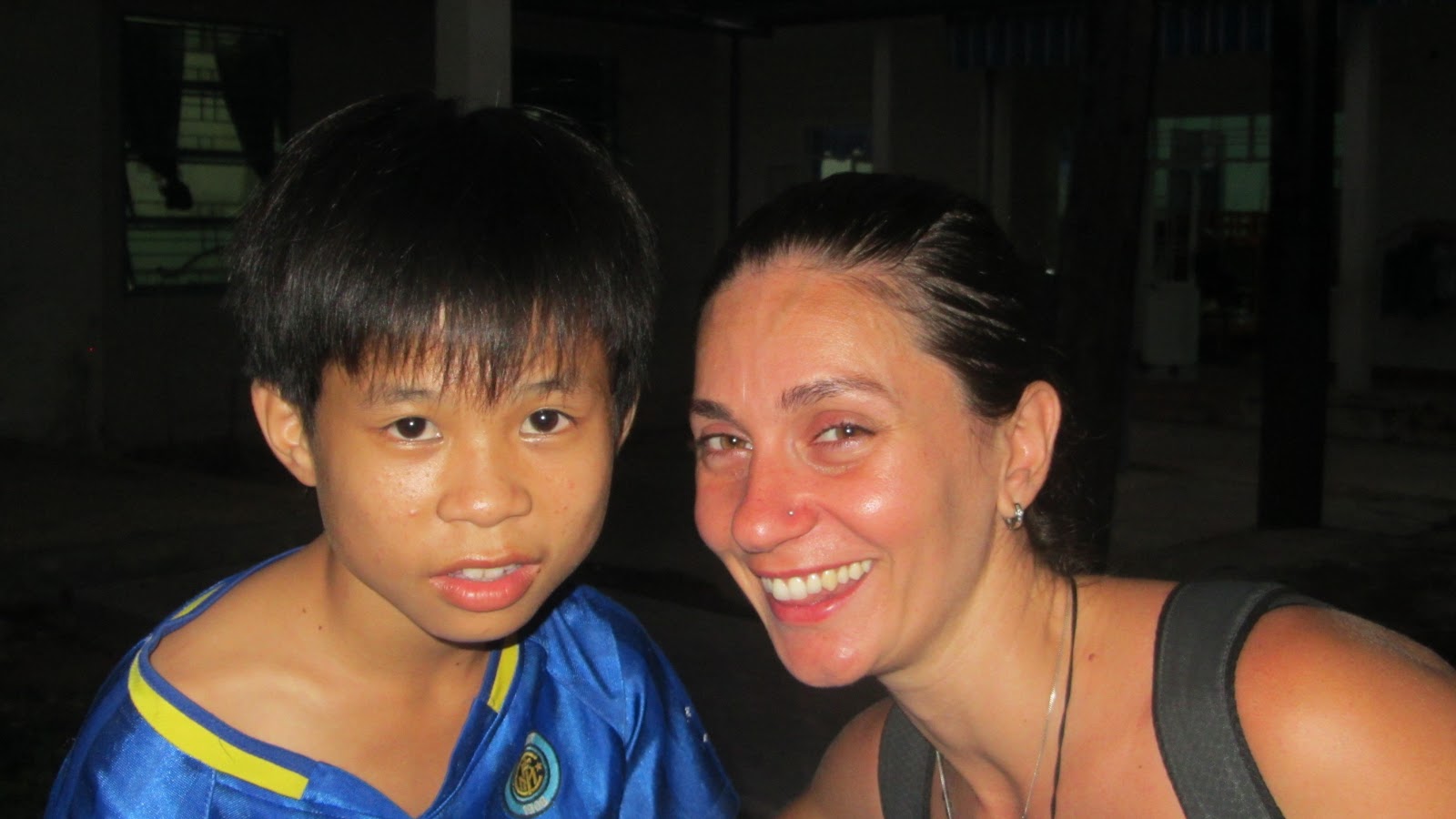 How I wish I could stop time even for a while......Half an hour to go and I began saying goodbye from youngest to oldest. I began in the baby room, where all the carers cried and when I turned, I had about 20 older children following and watching. 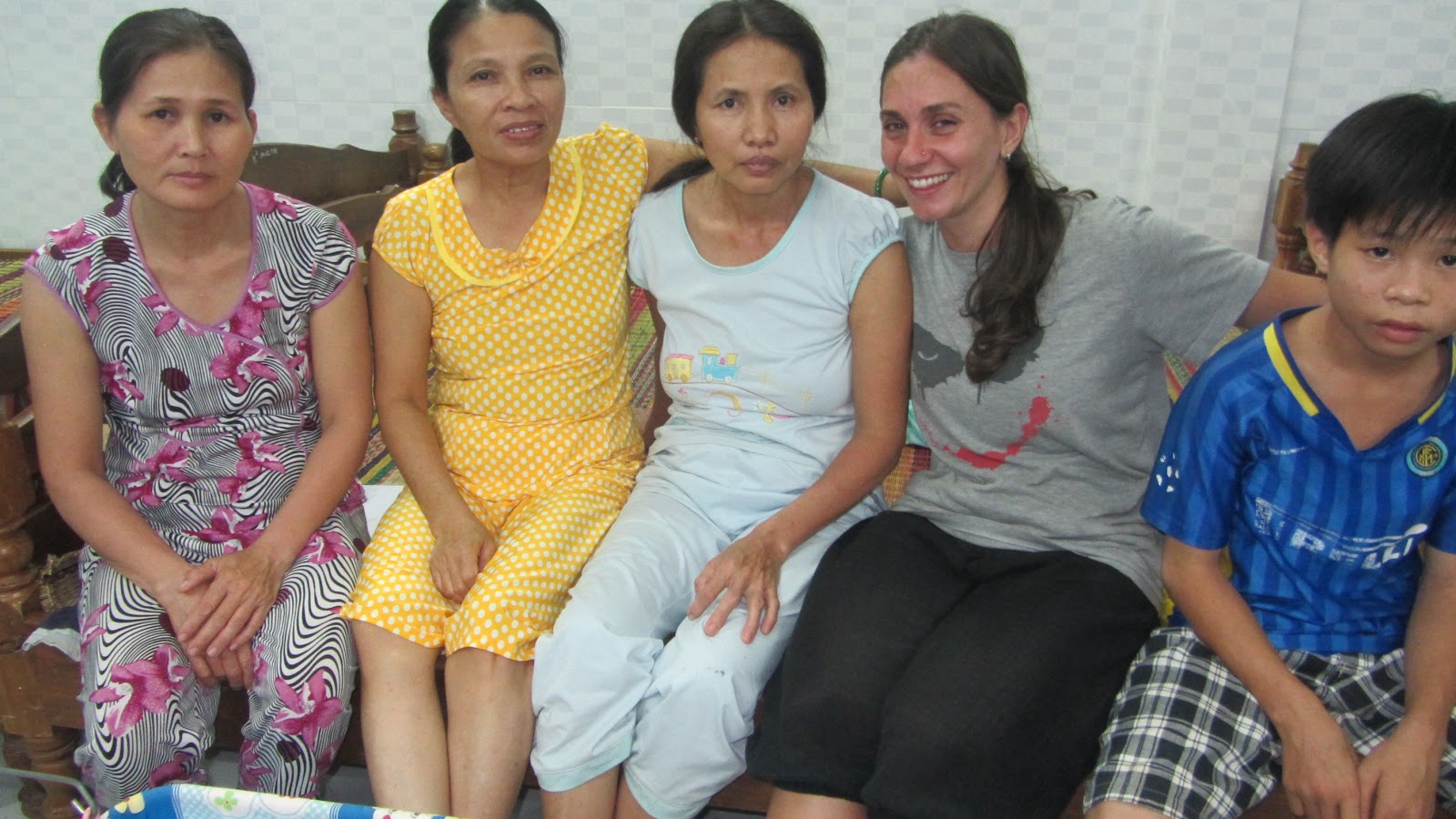 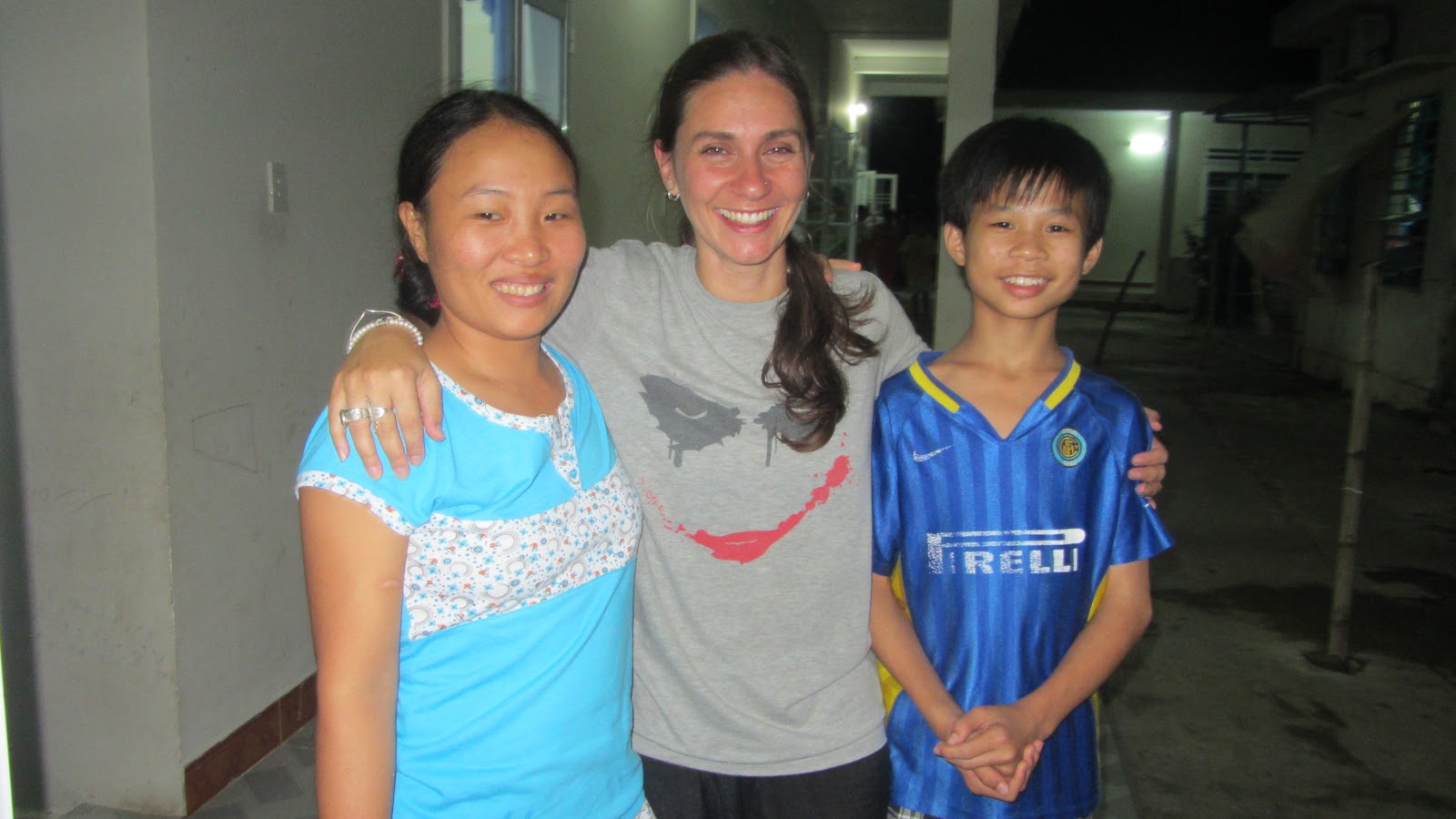 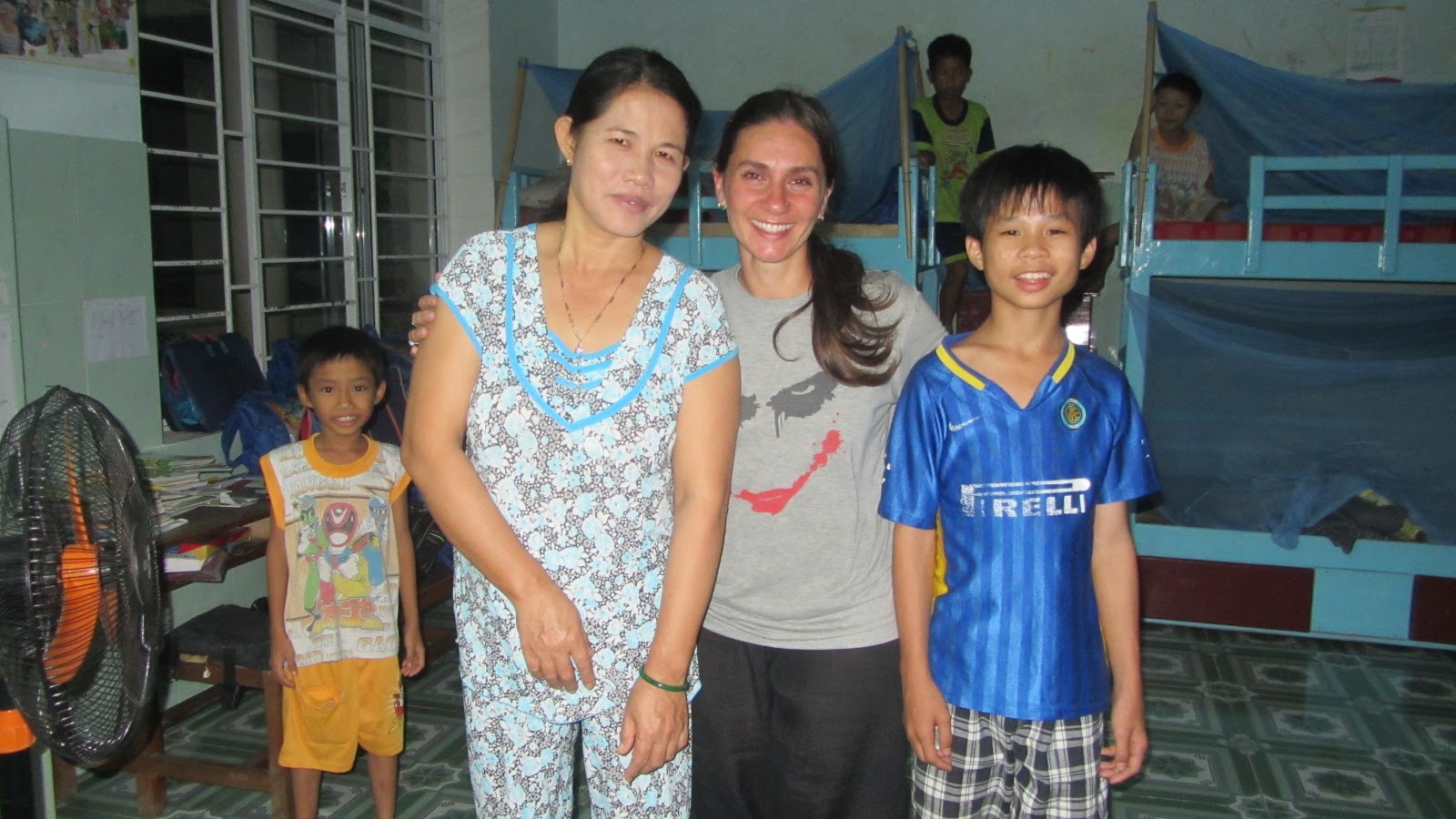 I kissed all my little babies goodbye. Some snuggled into me and others cried.... Lan never cries! But when I said goodbye to her, she had the saddest face and began crying when I put her down..... 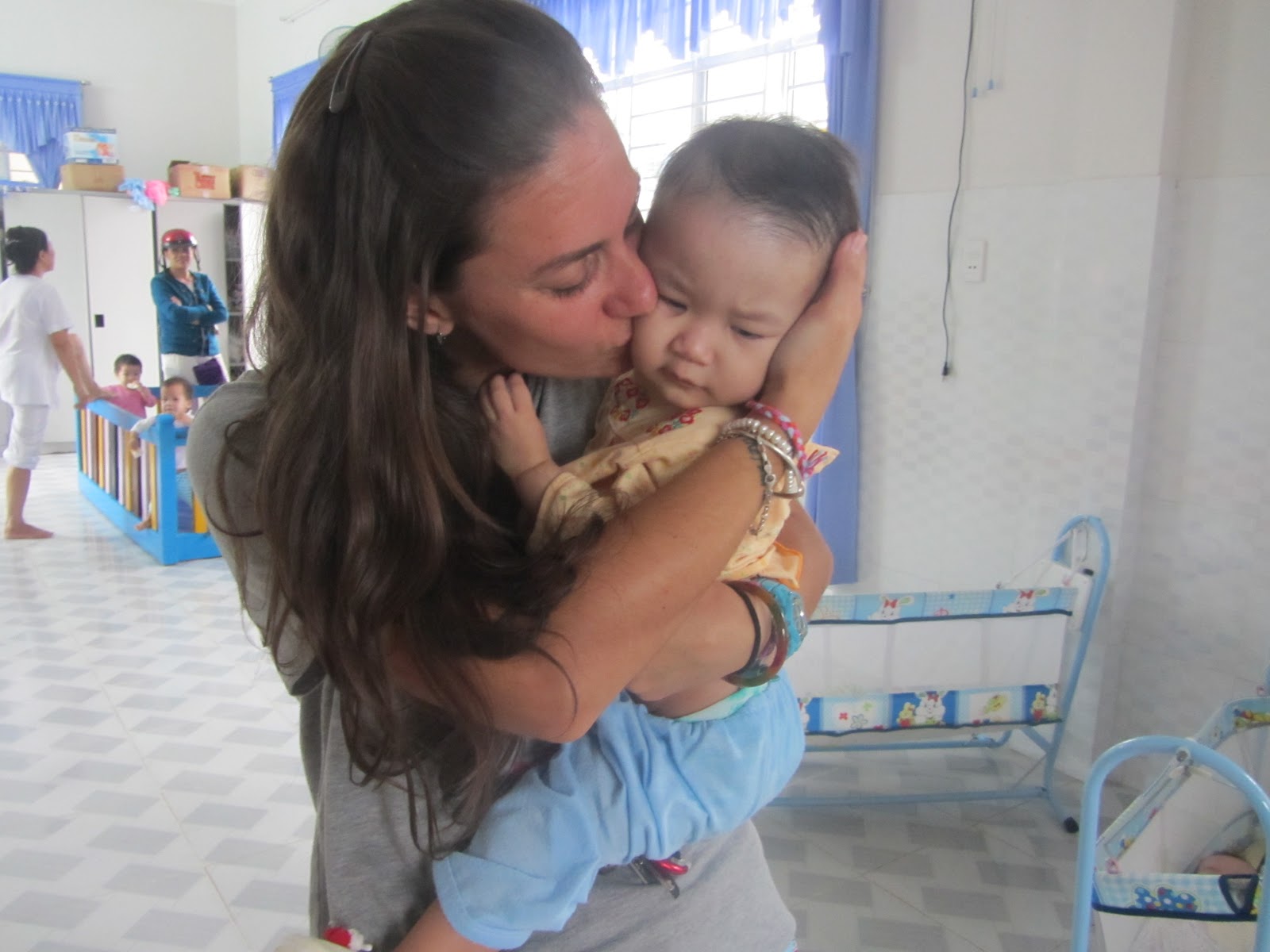 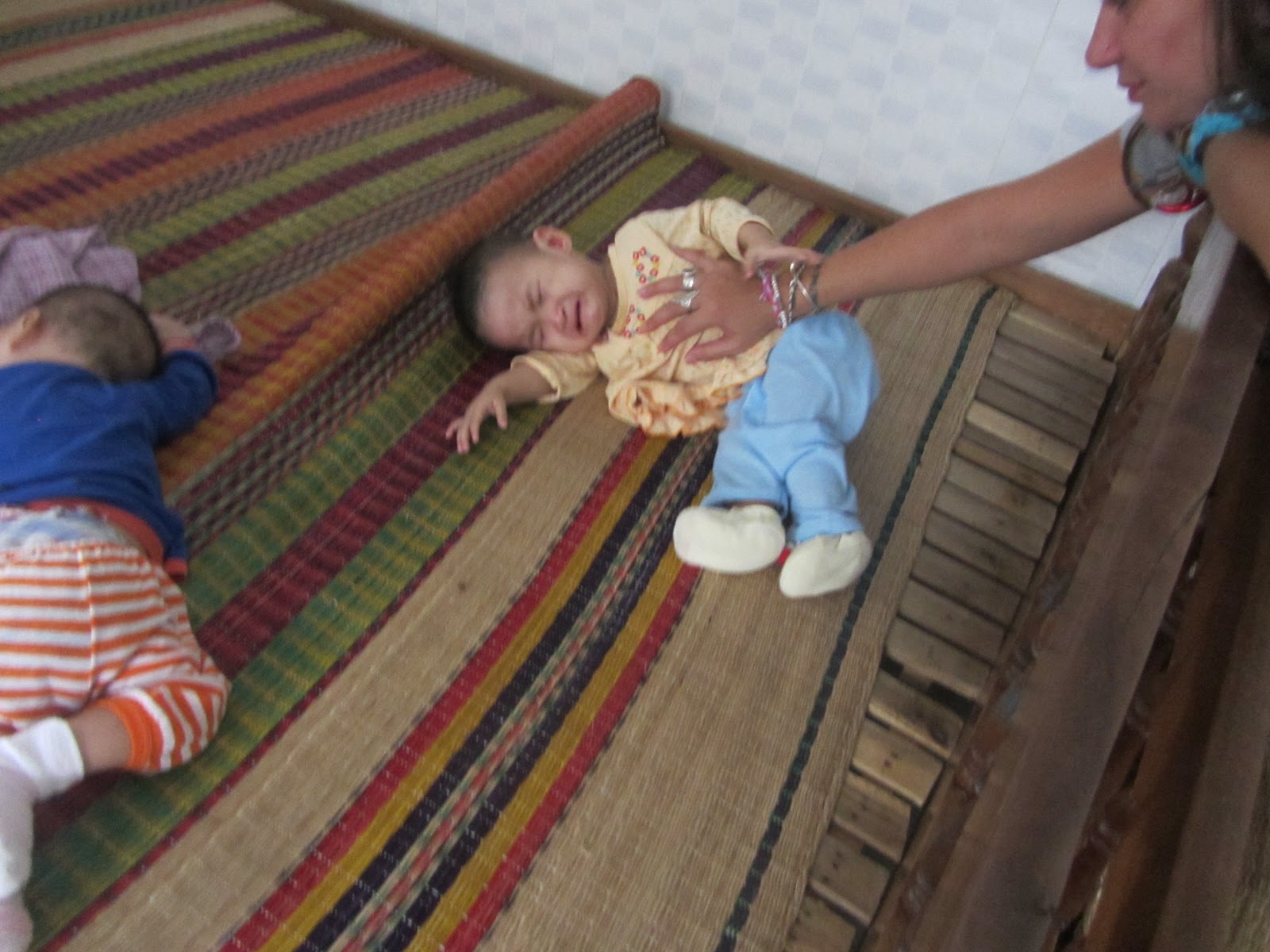 Toddlers and Disability room were next; I could not hold it together anymore. Picking up Sen and hugging her opened the floodgates and my tears free flowed and stained my cheeks. My little following had grown and now the 30 children behind me were watching silently.... Putting her down and walking out was really hard.... 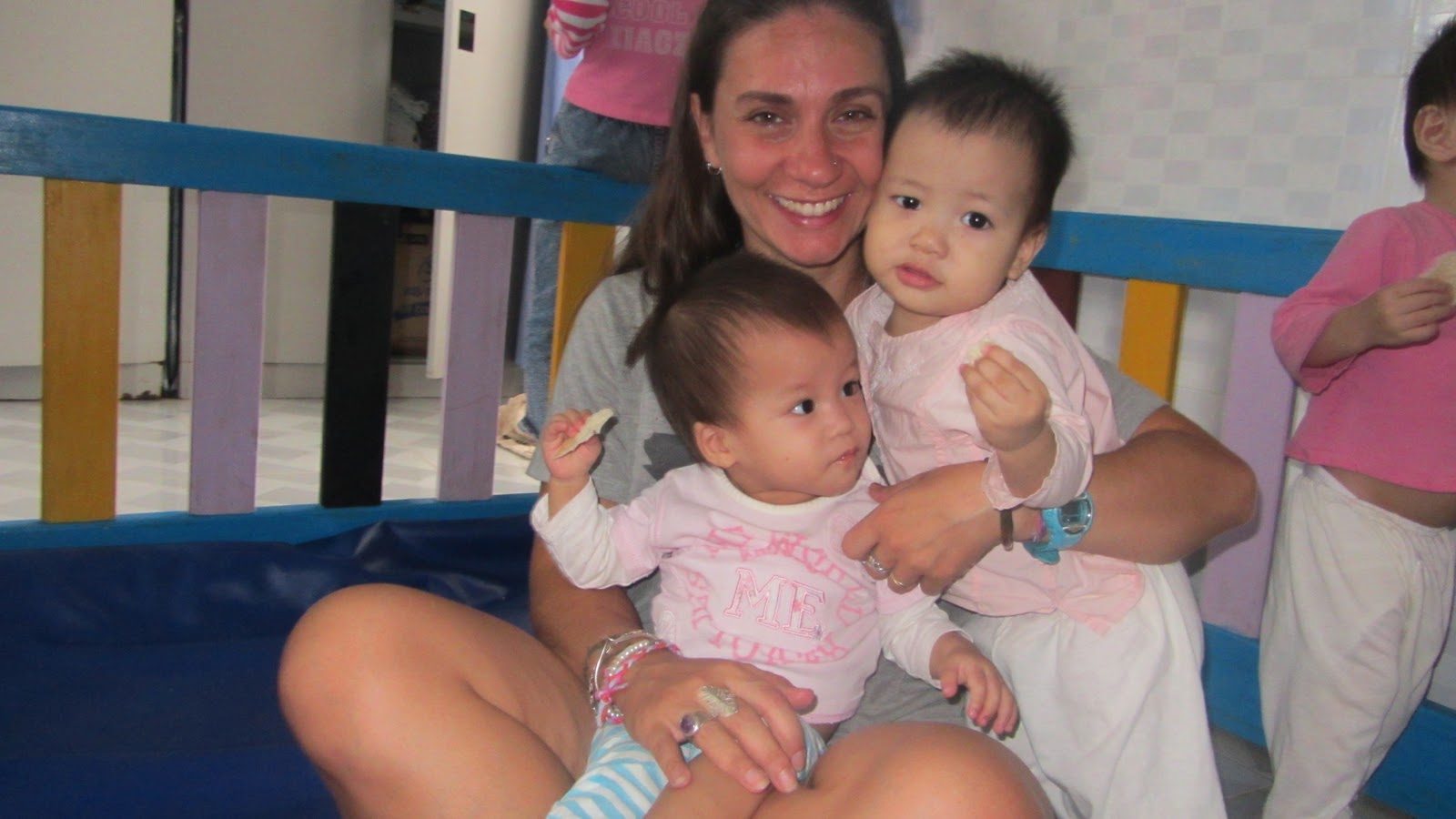 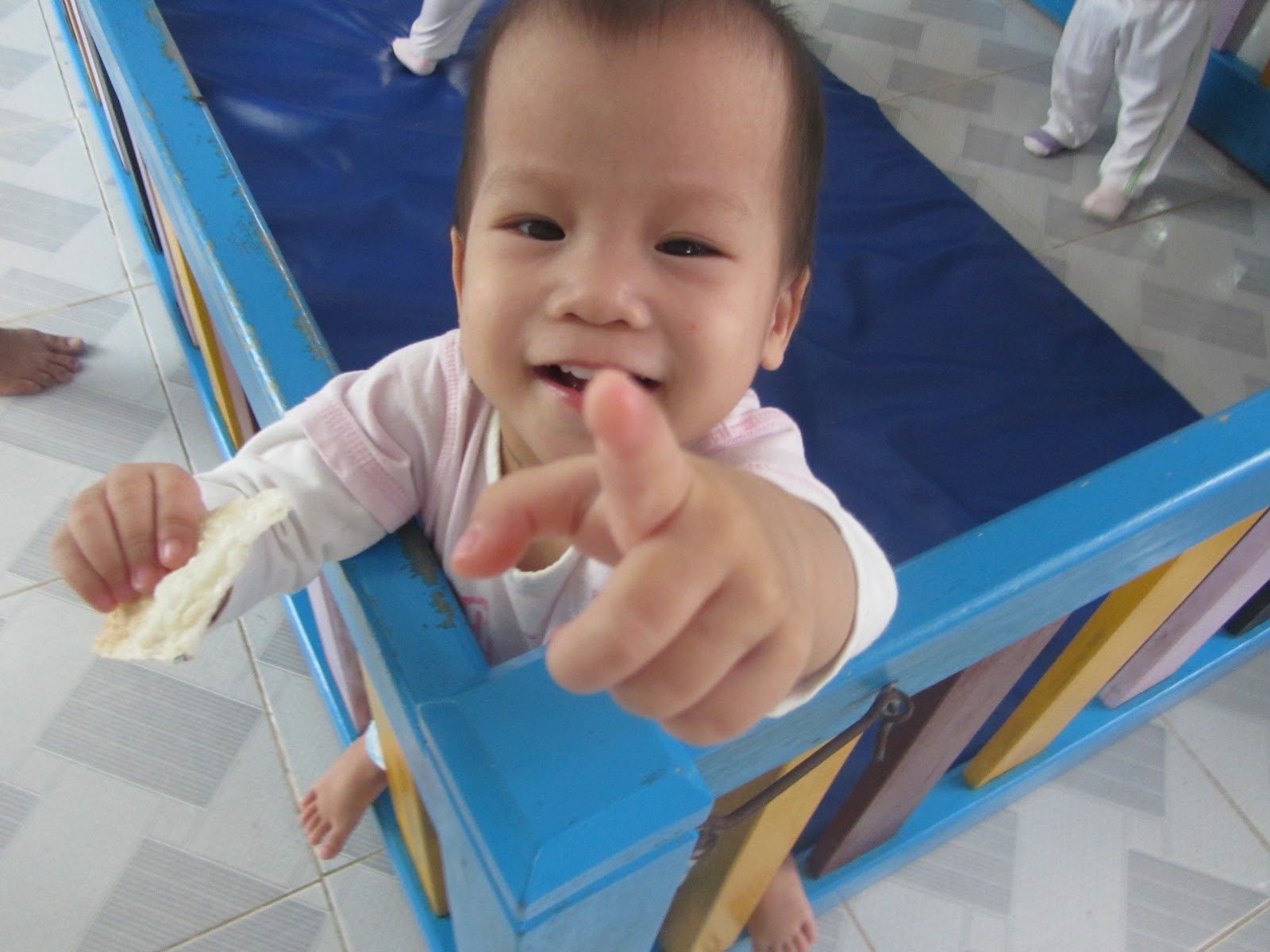 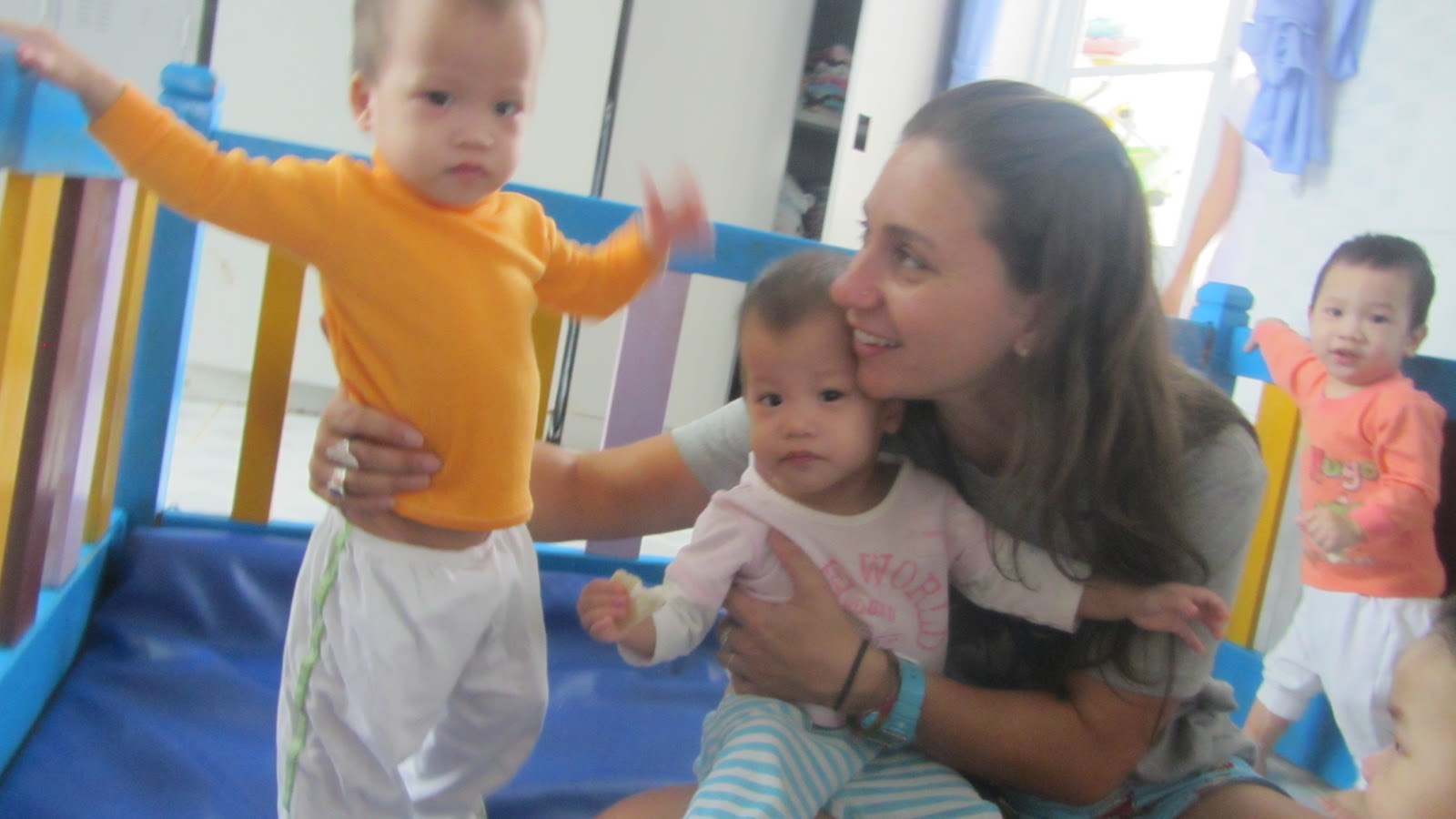 I went back to the girls dorm and Thanh was standing in the doorway when I said its time for Anna to go. She just shook her head from side to side and said 'no. no, no' and then she began crying. And not just crying, the wailing and the sobs soon followed after. By now, all 50 of the children had gathered and were all silently watching. Thanh got worse and worse and her sobs were choking her.
I turned and saw the other 4 eldest girls crying. Two were hugging, and the other two had sat on opposite ends, on the ground, hugging their knees, just crying. I hugged each one of them tight and told them not to cry, I was going to be back. "Thanh miss Anna alot" was what she said.
Tram's tears increased exponentially. At one point she was heaving and gasping for a breath that I had to sit her down and put her head between her legs. Nothing I could say or do would stop them.
By now, my middle girls all about 7 - 10 yrs old had formed a circle and were sitting on the cement, each one of them with their heads buried in their laps crying.
I felt like I was going in slow motion: I took a look around and there were just girls crying everywhere, boys standing with sullen faces, looking towards the ground as they had their arms on each other for support.
All you could hear was the gentle patter of the rain and many different cries that had come together in unison.
I just stood there and cried. I hugged each and everyone of them, told them I loved them and that I would be back.

It was another force that made me walk to the front gate. As I walked, everyone got up and followed me, with tears streaming down their faces, keeping up the song of lament.
The carers then emerged as they heard so many cries they were not sure what was going on.
We all stood at the front of the orphanage and cried. The carers were all crying, the girls were sobbing uncontrollably by this point. I didn't know who to comfort first.

Some of the younger boys had joined us now and they seemed perplexed as to why everyone was crying. Some came up to me and laughed and hugged me and then were teasing the others crying. They did make me laugh for a second amidst the tears.
The older boys, although didn't cry were very sombre, looking down towards the floor. Duc stared straight into my eyes with a pained expression when  I gave him a final goodbye hug that I had to turn away.

I physically could not move. I was rooted to the spot, just watching them all watch me.

It took one of the mothers to physically take me, lead me away, put my raincoat on, load up the motorbike and get me out of there.

I drove off with the last image of 60 children standing there, under the rain, most of them sobbing... And the final sounds coming from that orphanage was a choir of different ranged sobs and wails..... 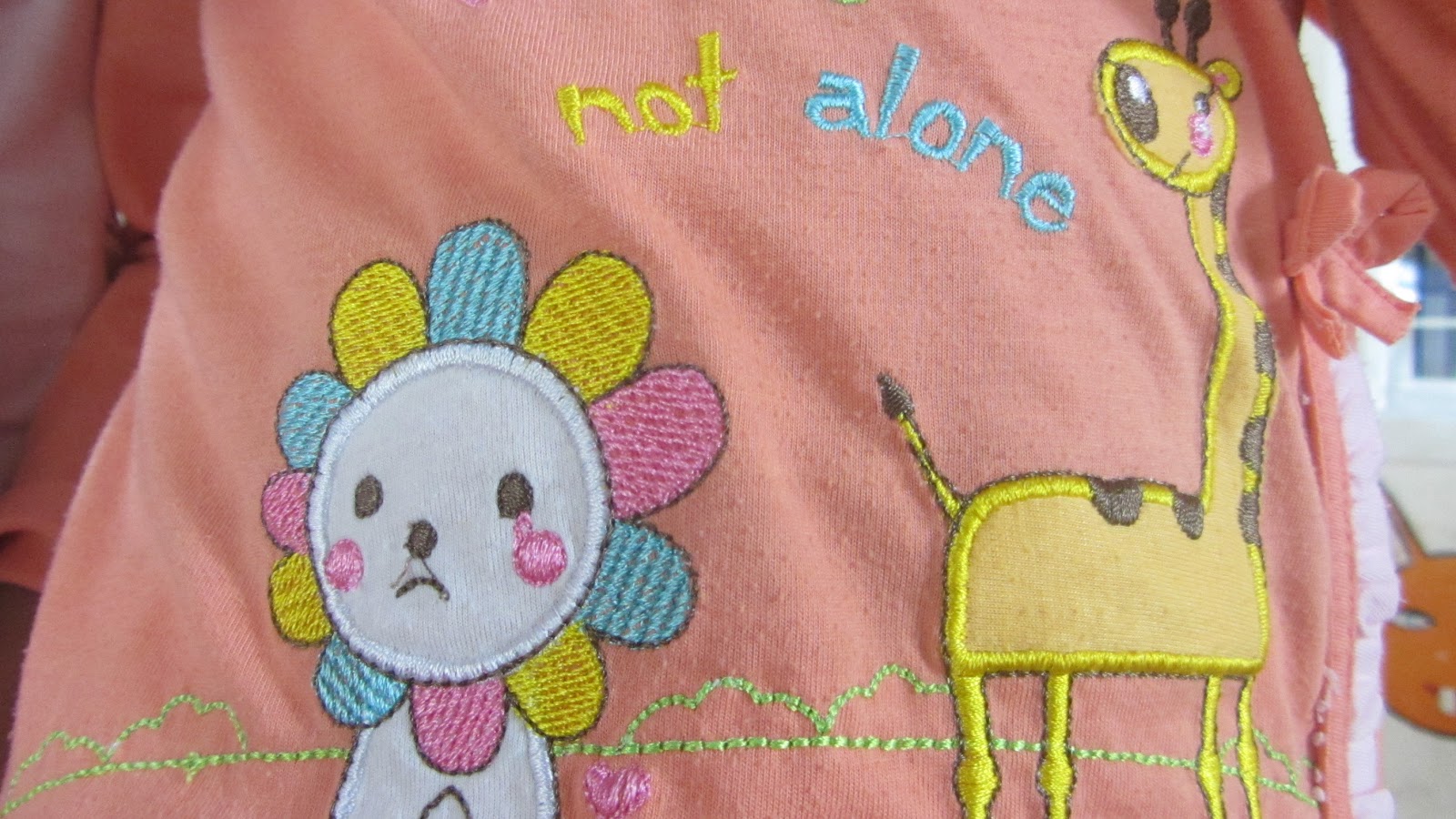 Posted by Anna LittleShoe at 10:50 PM