"Happiness is not the absence of problems, it's the ability to deal with them" - Steve Maraboli

We pray for the big things and forget to give thanks for the ordinary, small (and yet really not small) gifts. That is how I feel every time my visit comes to an end in Tien Phuoc.

For those of you following my journey, you will know that I visit this remote area of Vietnam and help out where I can. 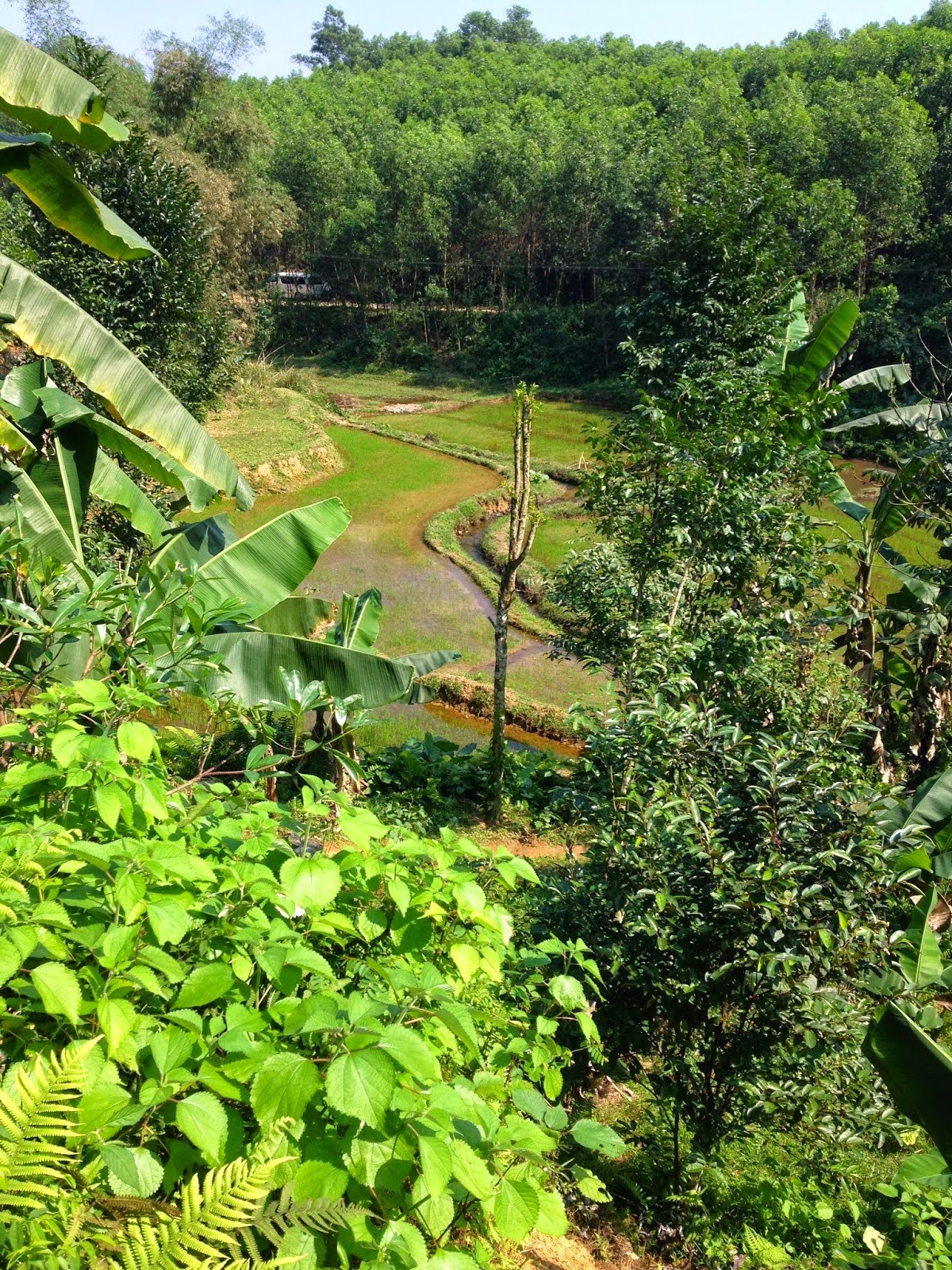 All your generous donations have helped provide shelter, food, an income for some families via the purchase of cows and pigs and an education for their children. I went back to visit some of these families - their stories can be found here at these past blogs if you are not familiar with them:
http://missionnampossible.blogspot.com.au/2013/07/everyone-can-do-simple-things-to-make.html
http://missionnampossible.blogspot.com.au/2014/02/a-kind-gesture-can-reach-wound-that.html

So! A very bumpy ride again 'into the jungle' as I was calling it to see these families again. 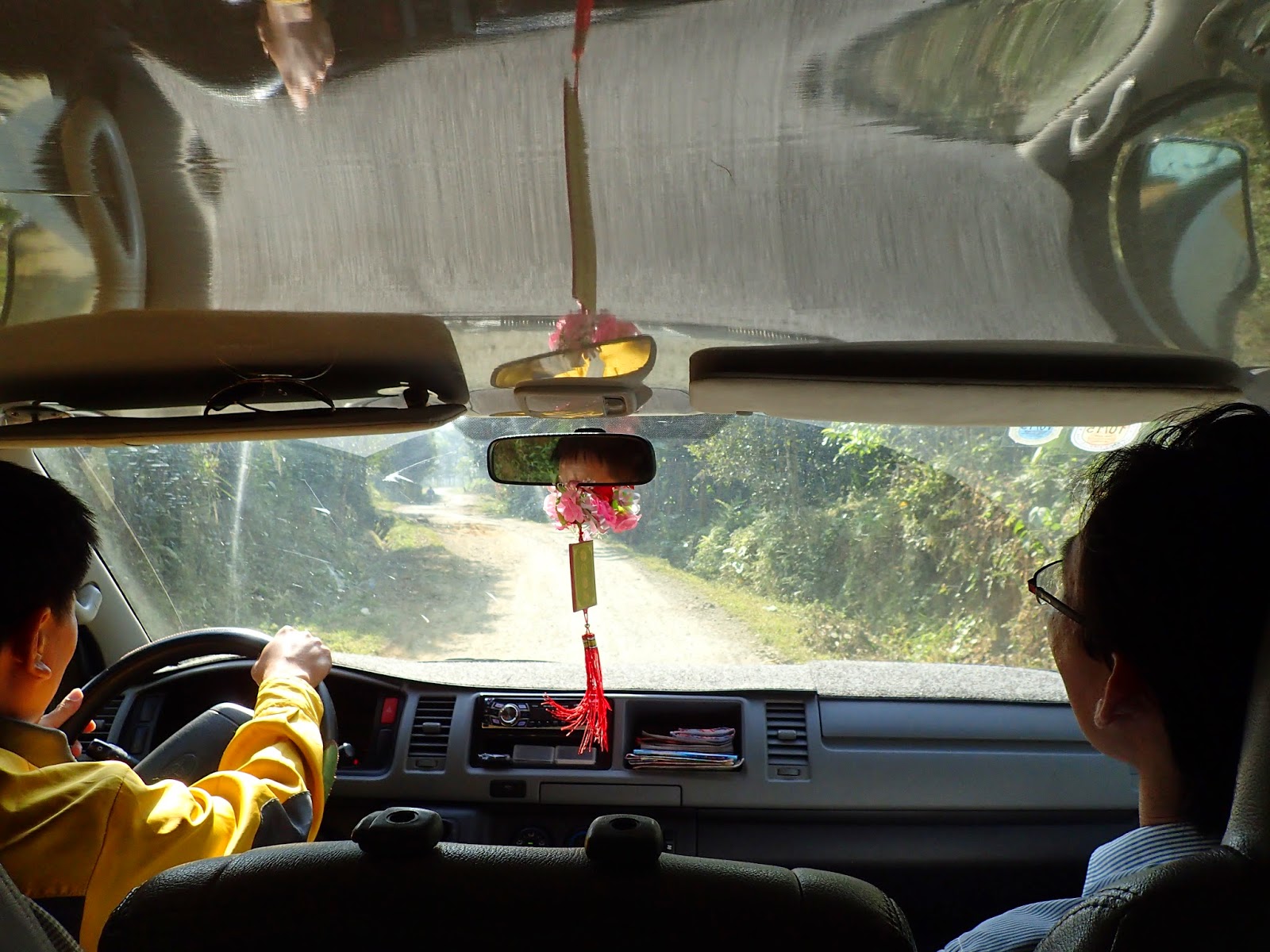 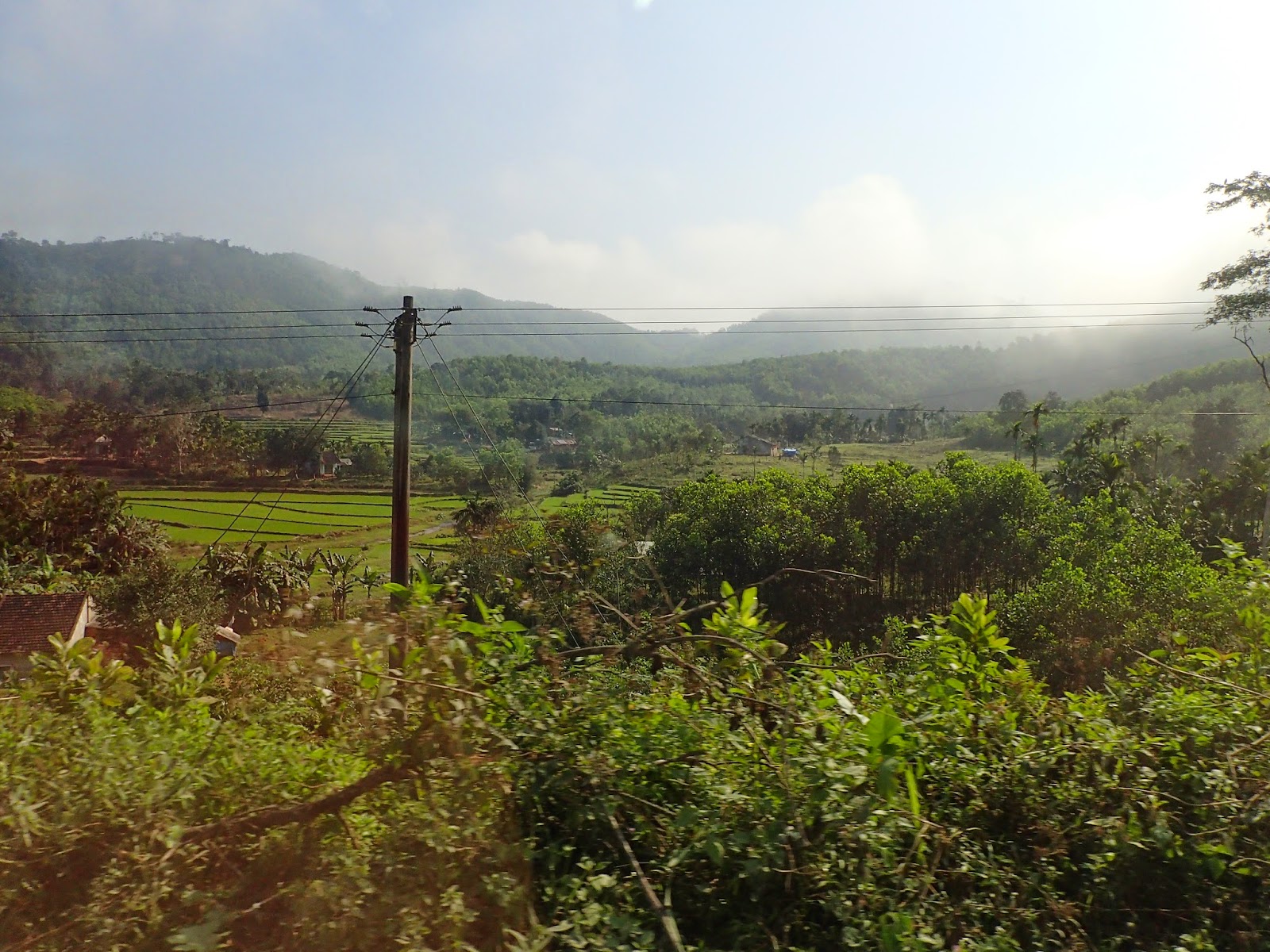 Phuong's family was looking much better. Dad was back at work and Mum was able to get some treatment for her cancer with that little extra cash flow. Unfortunately there is nothing to be done about both brothers with hemophilia. The mother asked me if in our 'lucky country' of Australia, we had a cure for hemophilia. I said no, we could just manage it better for them to lead a full life. In one way, I will admit I was a little relieved that I could say no and not yes! Of course we do! That would have made me feel... embarrassed? Almost guilty about having the good fortune to  be able to live in a country where ailments are curable and diseases are managed. Why me and not her and her sons? Why do some get to be born in a remote rural town where the nearest hospital for blood transfusions is 8 hours away and others are born in a country where its at their fingertips so to speak? Who chooses who ends up where?! Phuong's Mother was so happy to see me, she couldn't stop squeezing my hands. She sat me down and showed me Phuong's school results. Phuong was topping her year and the pride in this mother's face, made me want to burst into tears. She was loving being in school. She was clearly excelling. And I could make all this possible for $150 a year. It blows my mind. 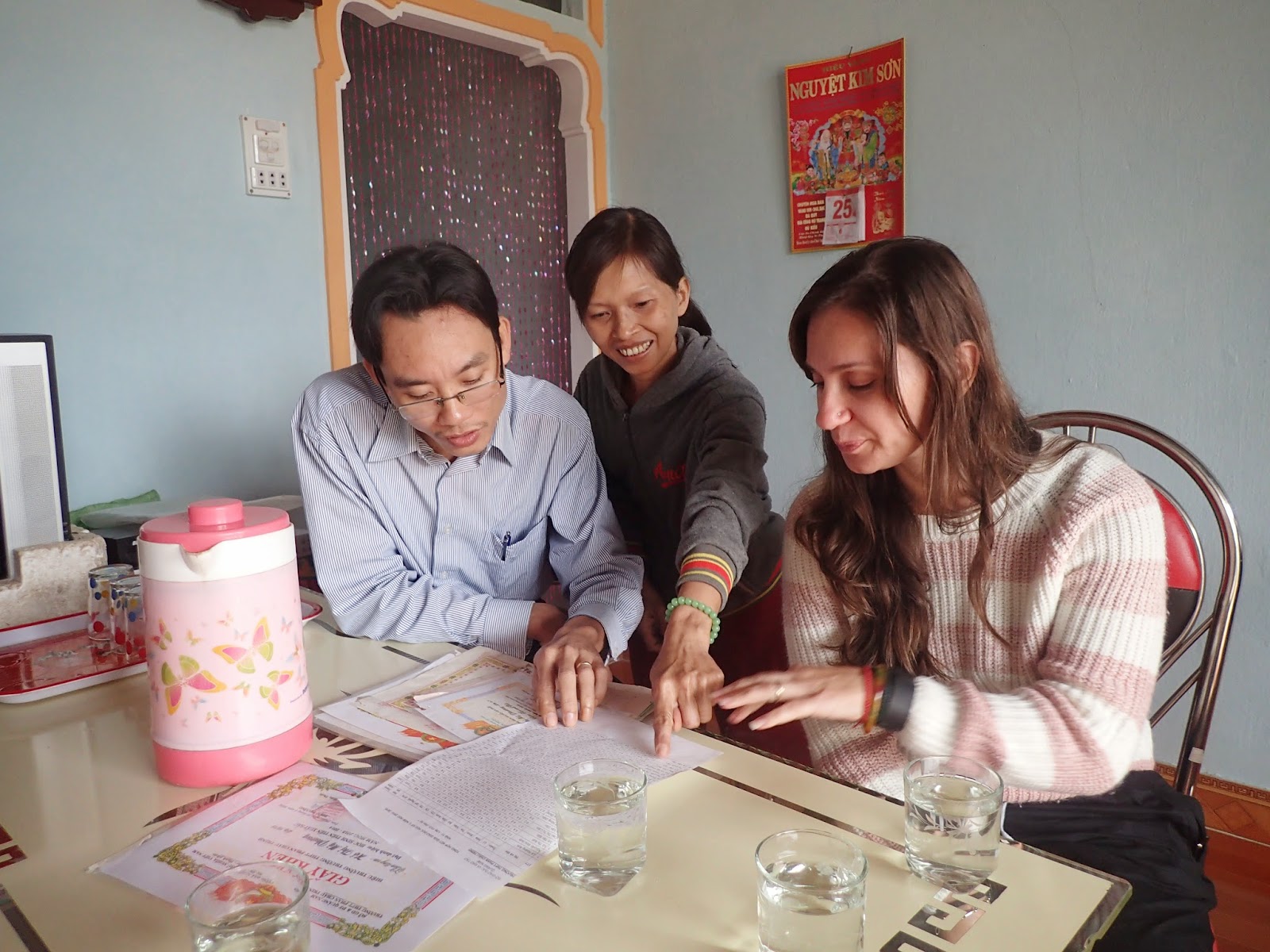 Next up, we went to see Mr Nhan again and see how the money making cow was going. This cow was purchased from a generous donation from the Glenhaven Rotary Club in 2013.

Mr Nhan has two daughters,Anh, aged 9, and Phuong aged 8, and a boy, Hoang Nam of 7. The mother ran off with another man leaving the father to provide for his 3 children.

We brought these children food and new clothes for the New Year and some toys to keep them entertained and stimulated. It broke my heart a little when the girls opened the pretend play supermarket and plastic food and asked "what do we do with it?". 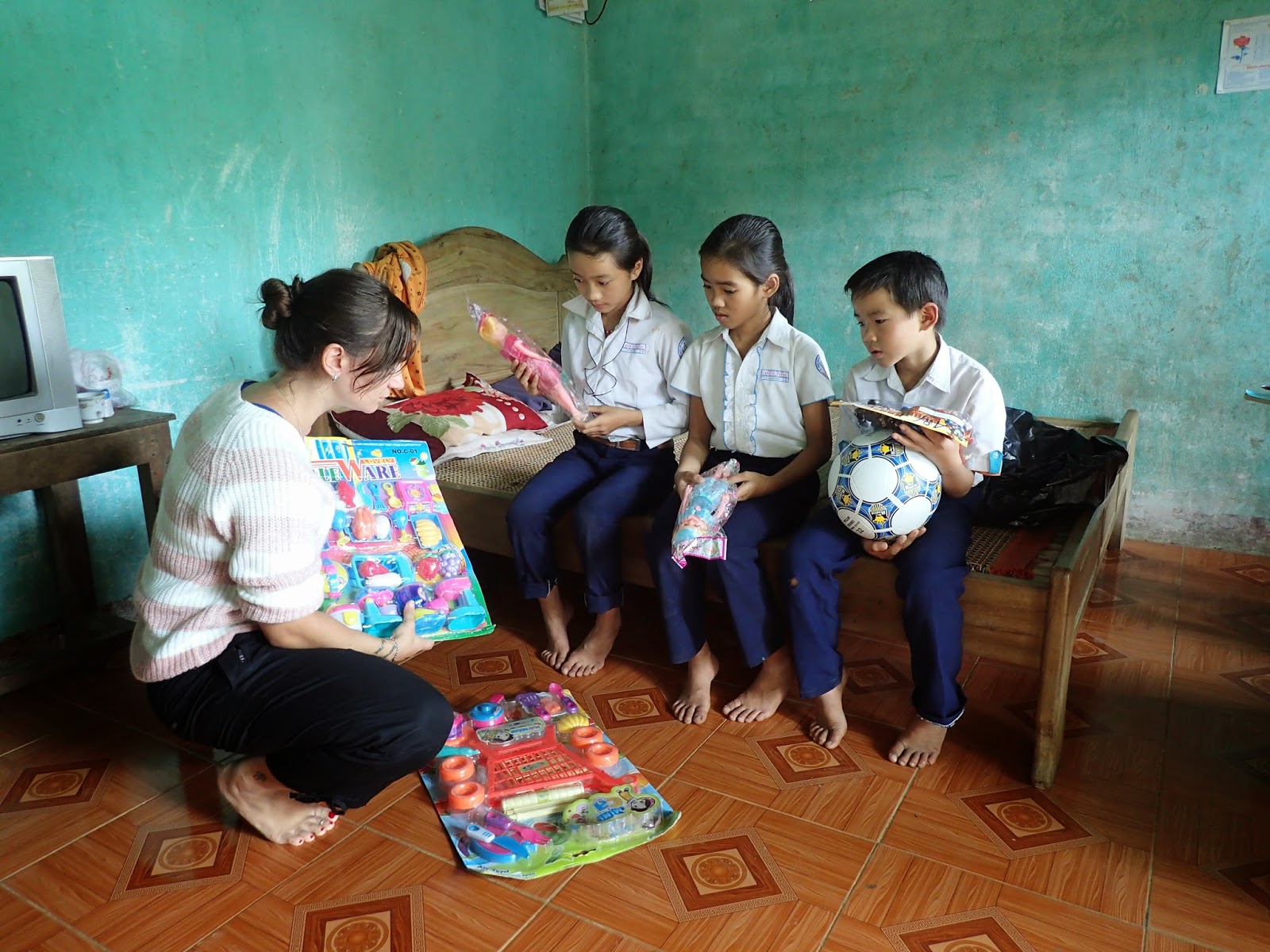 Donations pay for the three of these children to attend school. The cow has been able to provide their father with an extra source of income on top of his usual occupation of a rice field farmer. The cow has already had one calf and is currently pregnant again! He is very happy with this cow. Mr Nhan told me he had a difficult year but that he got through. 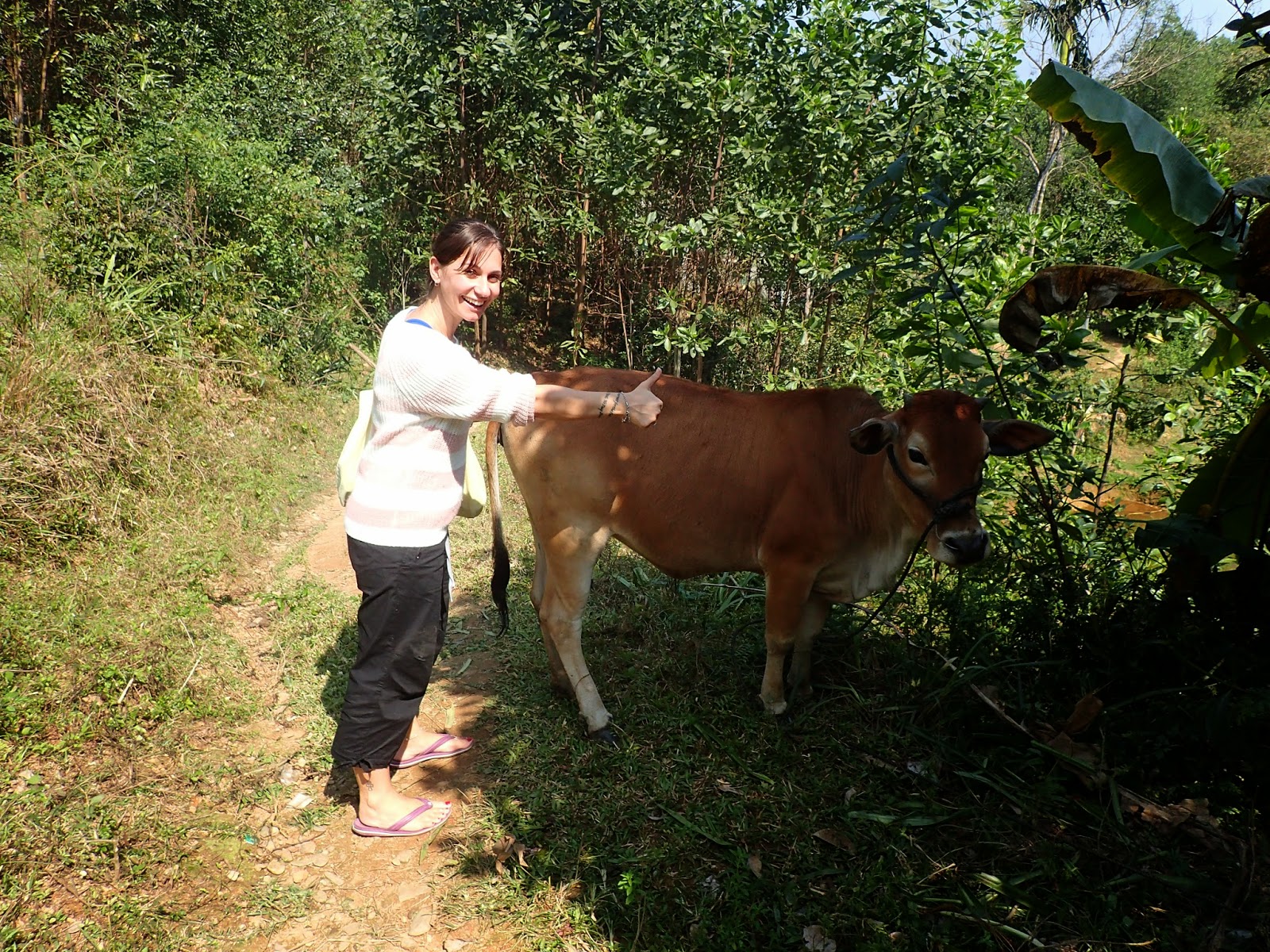 I looked around the tiny room where they all slept together and counted my blessings. At the same time, I was thinking about how fond I was of this man who struggles every day, yet, fights to keep his children with him. I asked if the mother has been in touch and has come to see her children. I got a no. He then, in a very solemn and soft voice told me that he has found out that she has had another baby with the other man she ran off with. My heart cracked into a million pieces. The pain was etched on this father's face and it was so present, I could feel it. I was fighting back my tears and with the help of a translator, I told Mr Nhan that I thought he was a very brave and courageous man. Not many males in this community and culture would fight so hard to keep their children together with them. I took my hat off to him and told him that I was really proud of him and acknowledged the difficult task he was faced with.

I told him I would continue to pay for his children's school fees for another year ( a total of $250 for the year for all three children!). I have always found him to be quiet and more of a shy character, yet his quiet thank you's to me that came along with a sigh of relief was deafening. 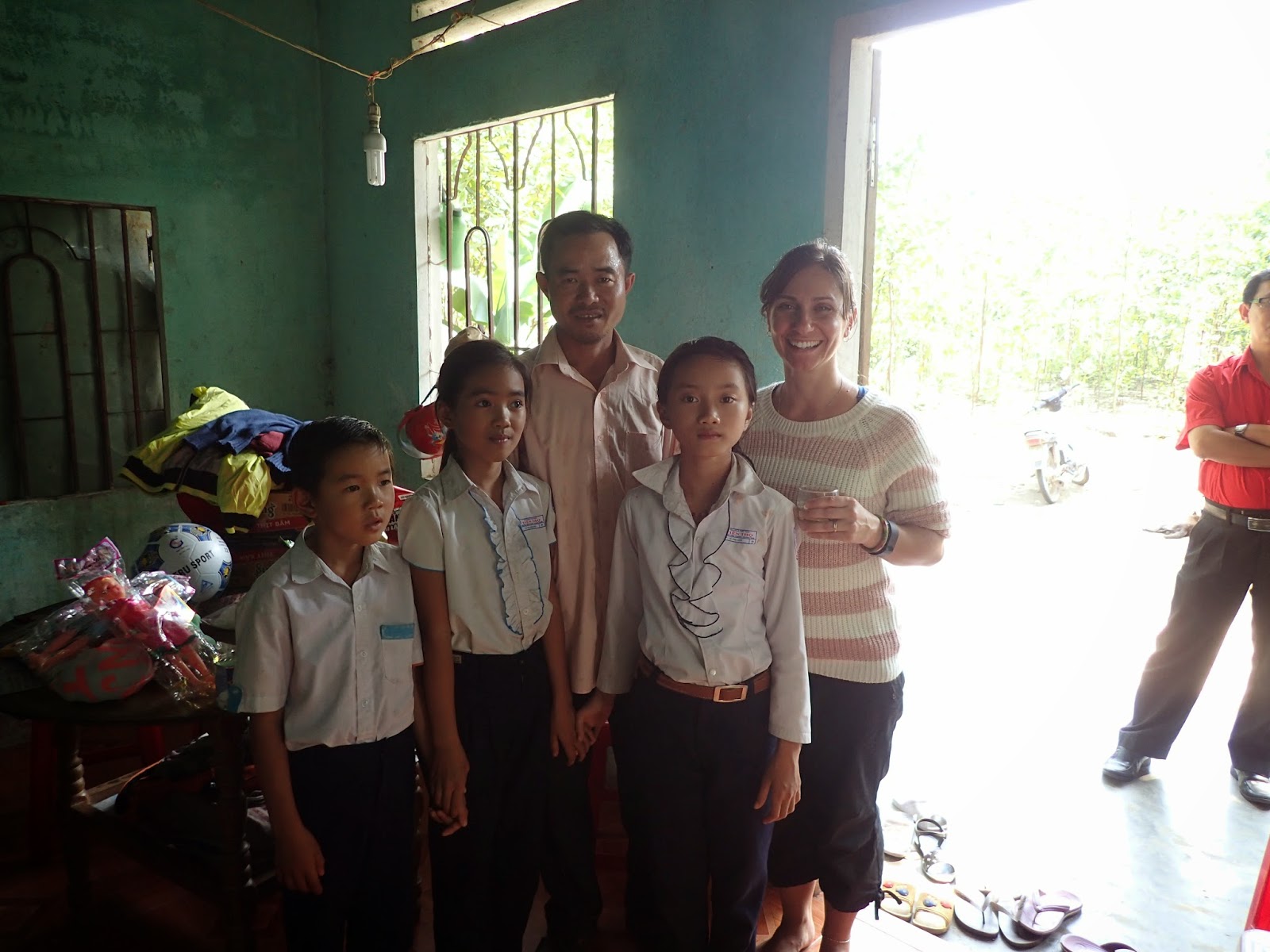 Mrs Sen. This one had to be the saddest stop for me for the day.

Mrs Sen is a new family I have been able to help this trip thanks to donations by my students at Randwick TAFE. They were so touched by my stories and work in Vietnam, that they all pulled money together and wanted it to be contributed to “half a cow!” So I took their donation and added more from others and was able to buy Mrs Sen a cow. 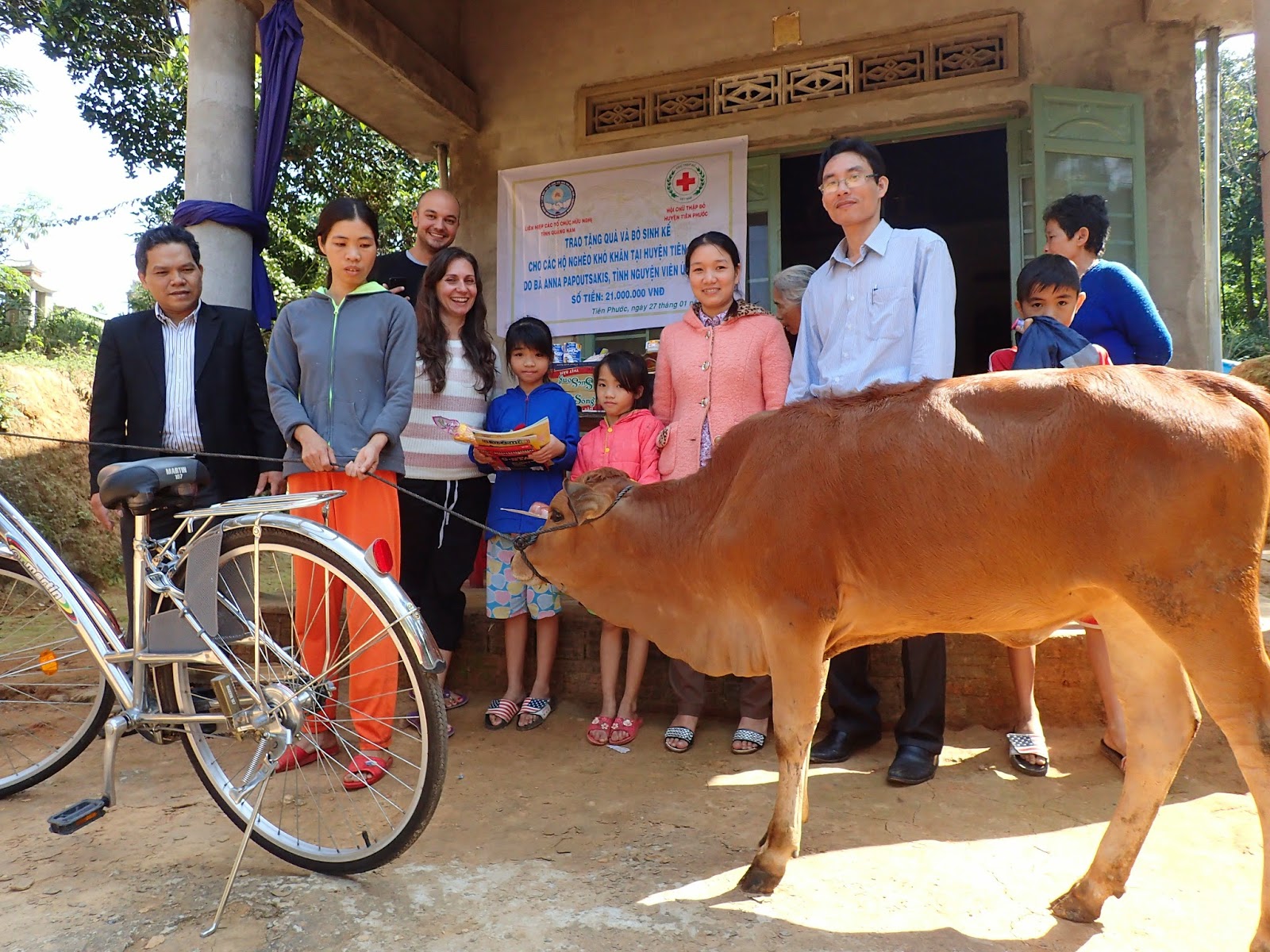 We all showed up in a van, local reporter was there from the television as well. We had also bought Mrs Sen a hamper of food for the New Year, new clothes for the children, toys and a bicycle for her eldest son to be able to get to and from school. 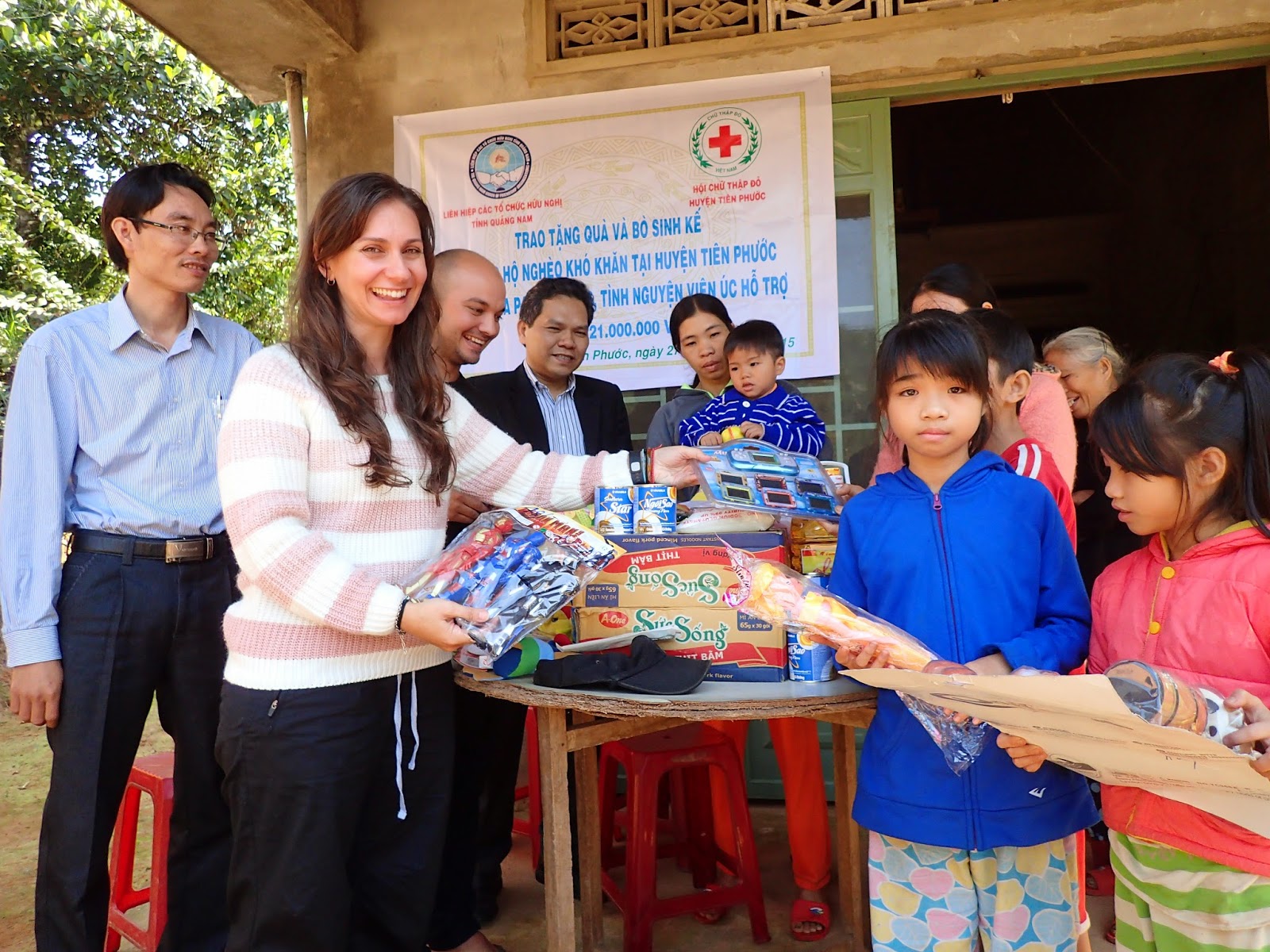 There were so many people there, neighbours came from around the community to see what was going on…. I couldn’t tell who Mrs Sen was! As I was looking around the place, I caught a glimpse of a woman who looked very skinny and frail and whose demeanor was just… well…. Sad. I knew instinctively that this was her. Someone called her over to me and she came up to me, head bowed down, not making eye contact with me. I felt really nervous for some reason. I felt uncomfortable? Was that the feeling? I was out of my comfort zone, in another world, so far removed to my reality. Butterflies were going mad in my stomach. And I thought that this was good. It’s good to be feeling uncomfortable. It makes me see things differently and question a lot of things about existence. 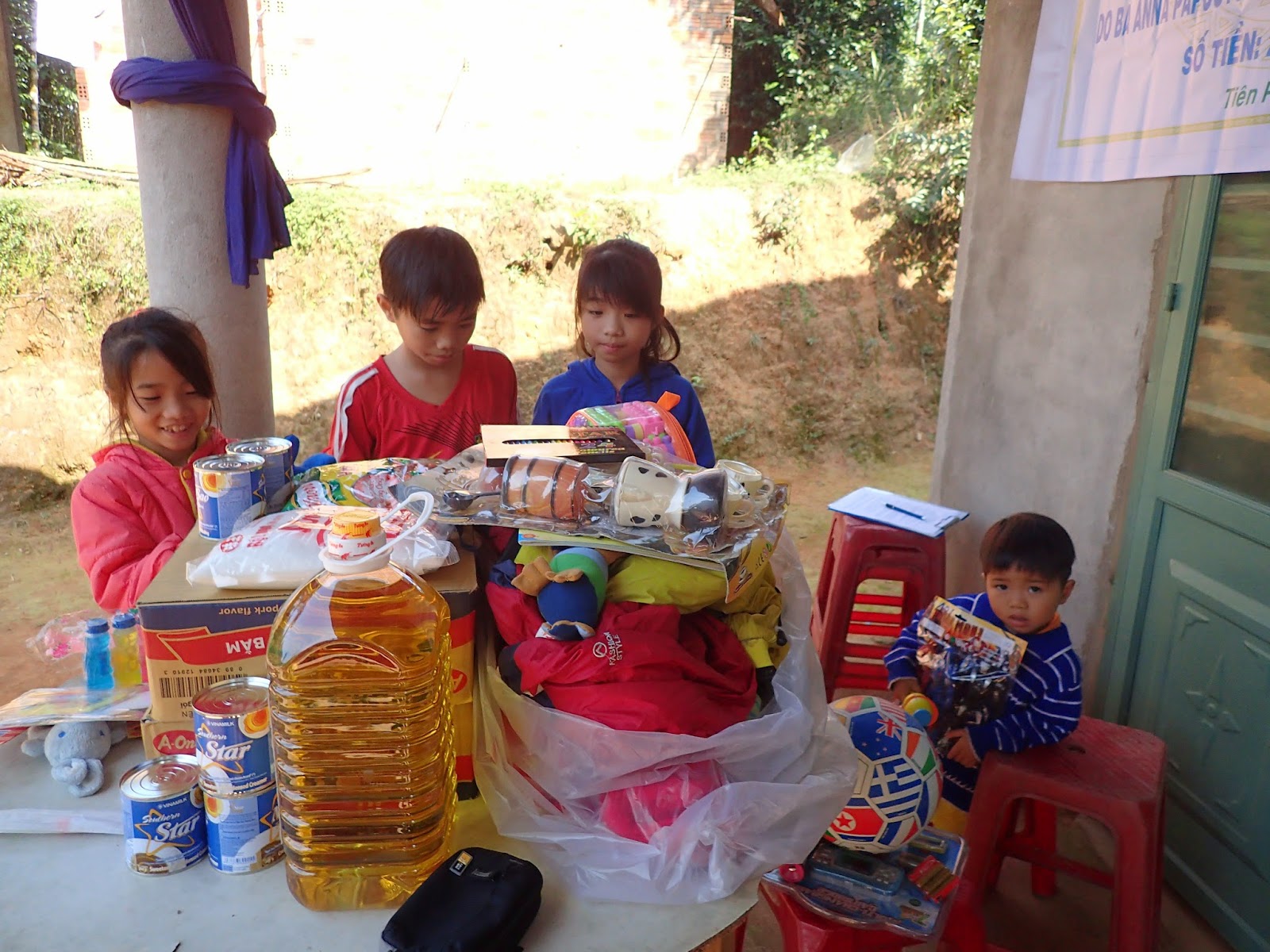 I felt a hand in my hand a few moments later and I looked up and saw that it was Mrs Sen’s hand. She still wasn’t looking at me but immediately I felt how much her hand was trembling. This poor woman was suffering. We went to the altar/shrine for her deceased husband and lit an incense stick. Her tremble turned into a shake. 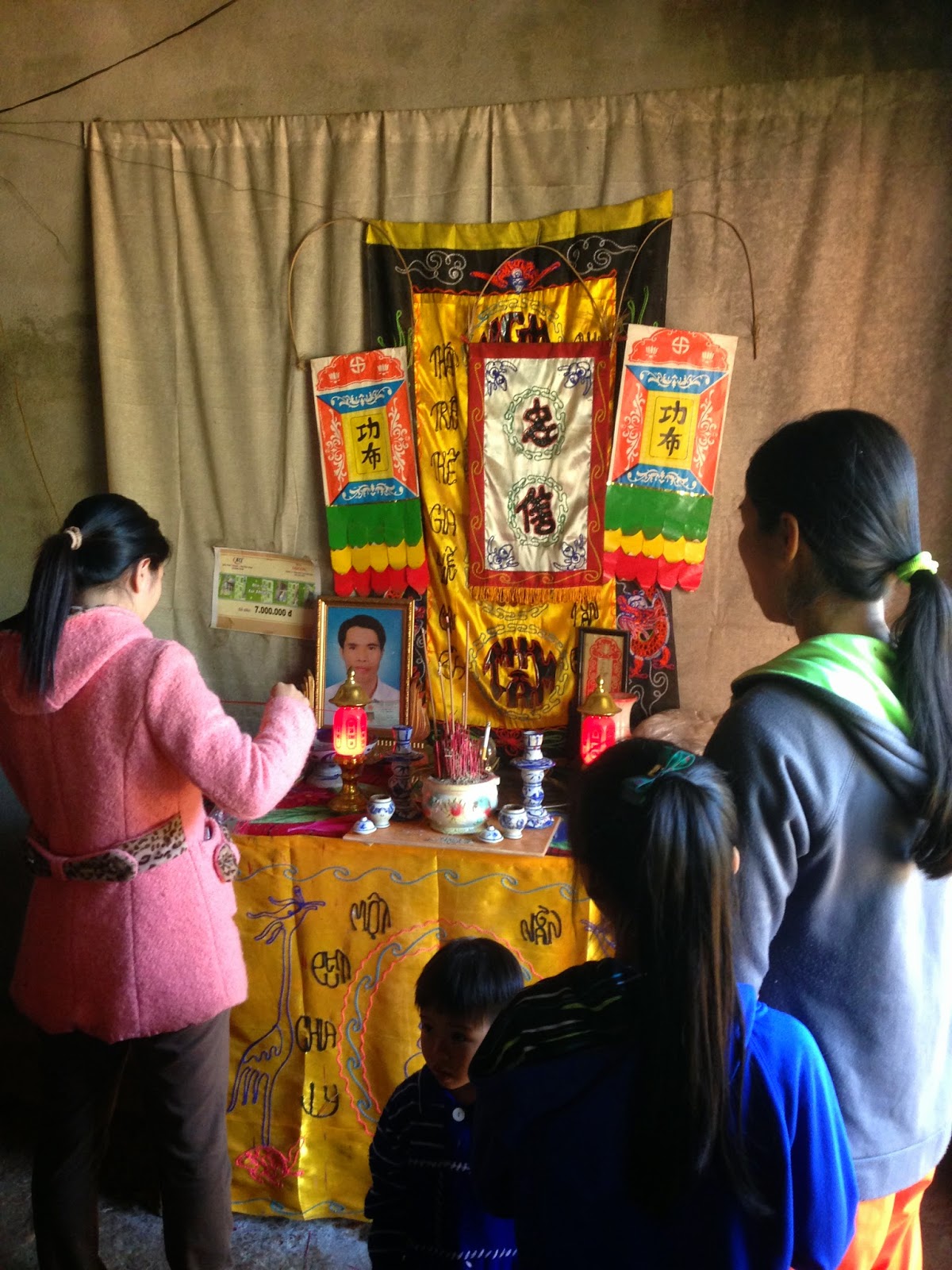 I felt like I was taking on her pain in that moment. I was crying without even knowing it. Her pain was still so raw. So fresh, so real that it consumed her. It hung around like a thick fog in the air.

They wanted me to make a speech and I was not expecting it (although I should’ve known better!). It was hard to get words out as the giant lump in my throat was restricting me. I know that I couldn't do much to take her pain away, but I was hoping that the cow would help make her life a little easier.

Grandma was last to visit with her two grandchildren. Since seeing Grandma last, something has gone wrong with her eyes and she cannot see properly. I am guessing it is something like cataracts. I was watching the 14 year old, look after her and tend to the cow and keep his 9 year old sister in check. The responsibility that has fallen on this young boy's shoulders was huge. I wonder if he felt it? I wonder if he ever resented it? I wonder if he just doesn’t think about it and just ‘gets on with it’ because this is his reality. And to top it off, he still goes to school! 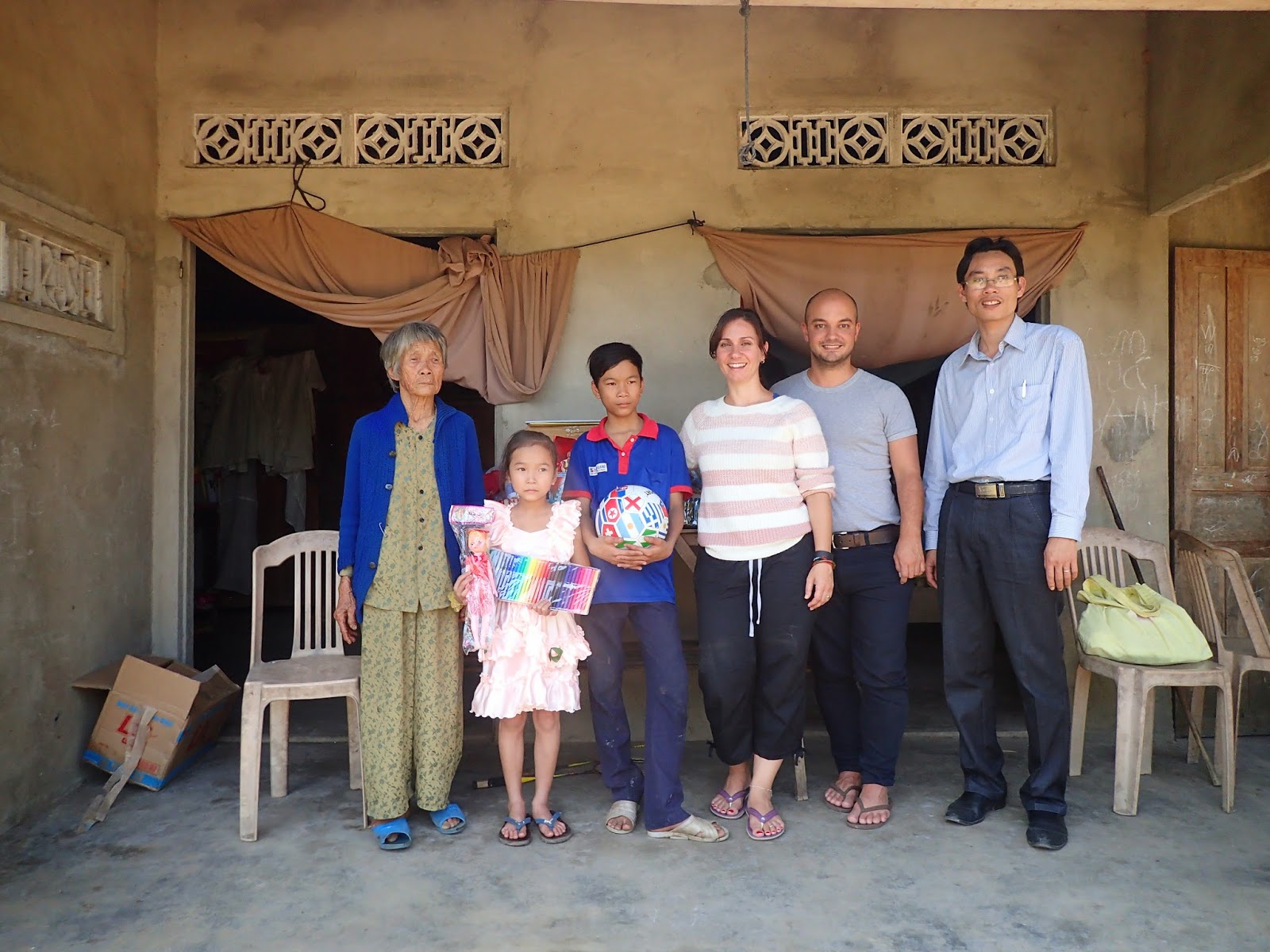 Little Ly, whose reaction I will never forget when we gave her, her first doll on our last visit (described in the past blog link above) was just as excited at her new toys this time round. We brought her an ‘updated doll’ and her smile was so wide, you couldn’t help but look at her and smile yourself. 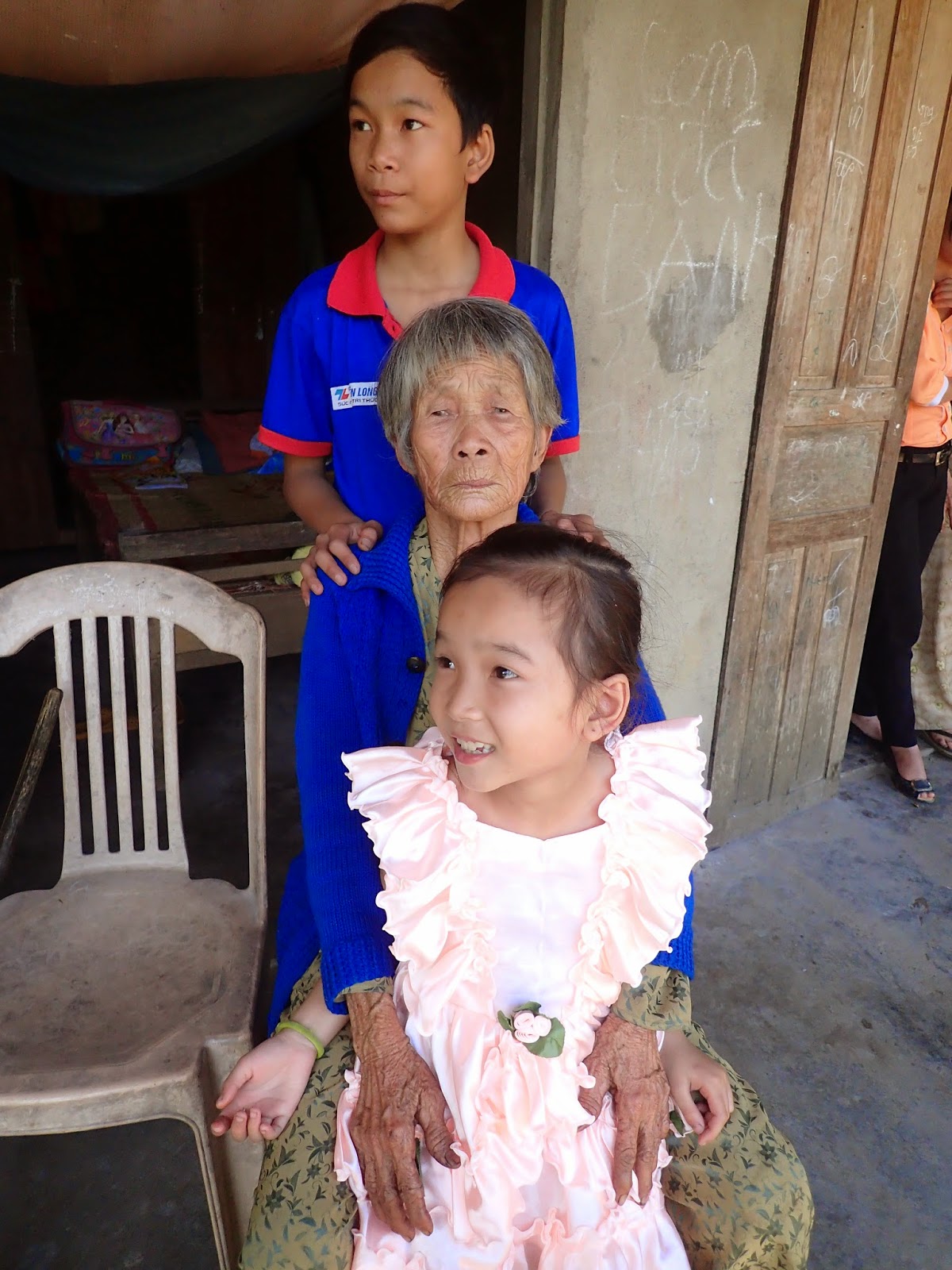 The cow was doing great as well and looking good so I was happy that our past investments were performing and providing an income to these families. 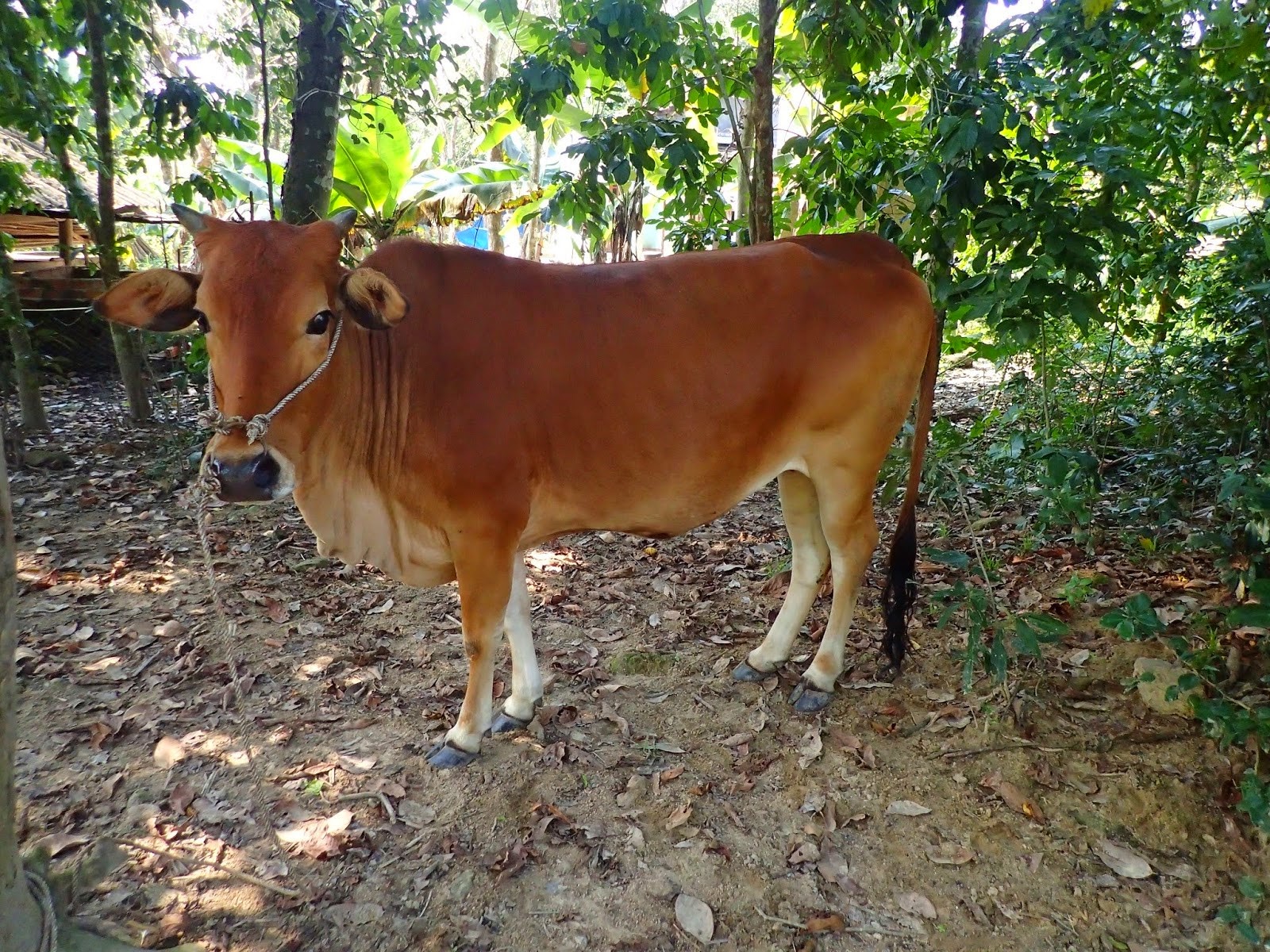 "Since you get more joy out of giving joy to others, you should put a good deal of thought into the happiness that you are able to give" Eleanor Roosevelt
Posted by Anna LittleShoe at 9:01 PM