The worst thing you can do is nothing...

Talking to a few local people got me thinking: orphanages get support from the government - no matter how small. But at least it is enough to survive.
What organisations and individuals who come through fail to see are the poor communities and the families who keep their children but struggle immensely.
I decided to suss out some of the local districts here and see what I could do to help and help them progress. It was an eye opener.
I met families who lived in houses without walls, mothers who would ensure their children were fed at the price of them going without.
I met many students who would be going to school alot more often if they had a bicycle to get there. To think that the only reason they were missing out on school was because it was to far to walk!
With the help of some Vietnamese friends, we managed to have a meeting with Principal's of the primary and high school's. They then gave us the names of the 10 most poorest families who attended the school.
And then I went out and bought 11 bicycles. 11 bikes got delivered on one motor bike which was hilarious to me! 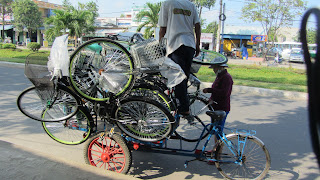 When we went to present them to the children, they were all so shy....... they said a million thank you's to me but were quite serious about the matter. 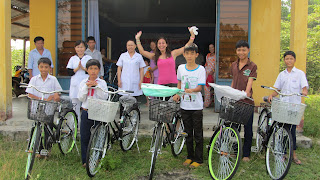 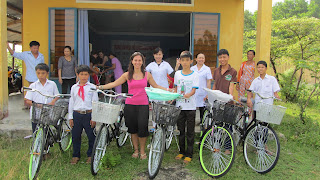 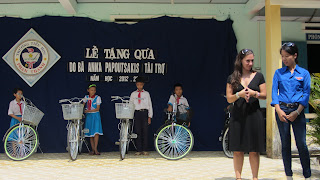 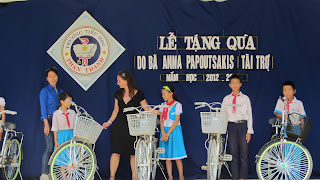 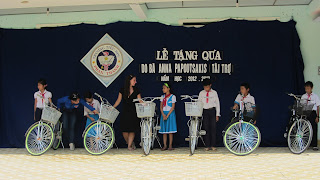 When they actually received their bikes and rode off on them..... the smiles on their faces could not have been any wider! 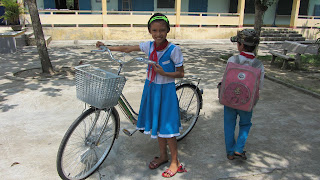 The families were coming up to me and thanking me, one mother was in tears and was grabbing me in a very strong embrace. Her little girl was so tiny. She was 13 and looked like she was 8. I am always amazed at how malnutrition stunts growth..... how we take good food for granted back at home.....Anyway, her daughter was up on the stage with me to receive her bike and from far, it looked like her shirt was grey and filthy. As I approached her and got closer, I saw that her top was not in fact dirty, it was grey because it was mouldy. She was as clean and kept as she could have been, god love her, but her shirt was that old and probably a hand me down from many other children, that it was stained with mould everywhere. I looked down and noticed her broken sandals and had to choke back my tears. 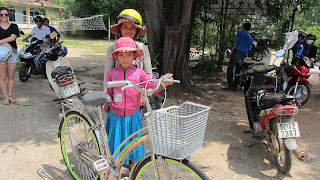 These children were amazing. One of the boys - the mother was so proud of him and insisted he get a good education at any cost to her. When we went into her house to visit, she proudly had all his certificates up on the wall on display. He was coming first in English and excelling. 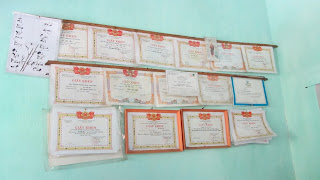 This tiny house with one bedroom - sheltered this boy, his brother, the mother, father and grandparents. The grandparents slept in the kitchen, two more slept in the 'lounge room' whilst the others slept in the bedroom amidst all their worldly possessions and belongings.
It was quite a humbling experience watching these people in the country side. They do not have much yet they work so hard and sacrifice so much so their children can get a good education and not be stuck in the same rut they are in. They are trying hard to break this poverty cycle. By far, I have met some of the bravest, hardest working people in my life in these villages. To continue solely based on hope for a better future. Can you imagine their drive and persistence? It was pouring with rain one of these mornings. And you would think they would cease work. But no, they had their poncho raincoats on, made makeshift shelters with tarps and kept going with their market stalls and daily life.
I heard of a boarding school up in the mountains in an area called Kham Duc. This community has many ethnic minority families. Population: 8000. We took the 3 hour drive up the mountain as I was curious to see what a boarding school looked like over here and because I had heard stories of their poverty and wanted to see if I could help in anyway.
I found out that there was only one high school in this area and they had about 1100 students. Out of those students 60% were from ethnic minority families. 400 of these students lived so far away that they could not travel to and from school everyday so they boarded in the dorms. Boarding for accommodation cost them $5 a month. I asked them if I could do anything small to help out now, what could I bring up with me? The answer I got was to bring as many packets of instant noodles as I could afford. They have no kitchen facilities at these dorms and the students cook in the stair well. Yes, that is correct. In the stair well. They only have a rice cooker to cook with. No ovens, no stoves, no cook tops, no fridge. Only whatever they can cook in a rice cooker. Most days they eat just plain boiled rice. 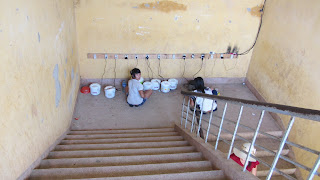 So, I filled up the car with 1000 packets of noodles of every flavour possible with 100 cans of meat (sort of like SPAM).
When I arrived in the town, it was all eyes on me. I would be surprised if any other westerner has ventured that far into the mountains and so I was a tourist attraction. When I entered the school, the students did double takes and most of them were scared of me, even though I was smiling and waving at all of them. They all ran away from me!
The dorm manager showed me around. wow. It was a lot to take in. I got there at about lunch time so I got to see what these teenagers ate: I must seem like a fatso to them... me and my chunky thighs walking around the place, amidst teenagers who most could have passed for primary school students. Again, the value of good food, nutrients and vitamins missing from their diets......
On the stairwell, they have about 8 double power plugs. At its peak, I saw 24 rice cookers plugged in all cooking away. I opened them all and all I saw was alot of rice, some bamboo chips, some morning glory. No meat. 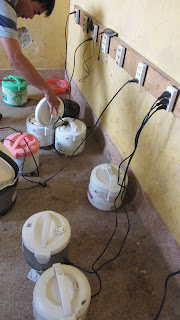 When I unloaded the 40 boxes of noodles, they got so excited. They were all saying thank you to me and then running away back in their rooms. Some of the older boys were getting cheeky and I can only guess what they were saying about me - especially since they thought I was just 19 years old!
By the end of my 3 hrs there, they were slowly approaching me but all were still so shy to talk to me. It amazes me how universal teenagers and teenager behaviour is in every part of the world - despite circumstance. I noticed that alot of the boys and 'cool' girls had mobile phones. I was stunned to see them actually. You are telling me that you are poor, cannot afford food yet you all have mobile phones!!! The Vietnamese host laughed at me..... she said that sometimes the boys would eat plain boiled rice for a few weeks, just to be able to have credit on their phones. priorities much? but then again,. you are talking about teenagers! 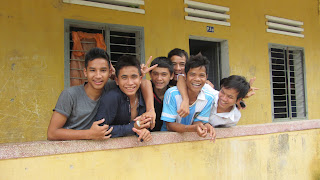 As I was walking around the dorms, I would turn around and see all these phones hanging out of the door frames on unidentified arms trying to secretly take pictures of me. I just walked up to them and posed with a big cheesy grin. I even grabbed some of the boys to be in the picture with me and by golly gosh that caused a stir! how cool are they now though? they could go to school tomorrow and show off their picture with a fat westerner!
The rooms, if you can call them that were a big mix of a laundry, study room, kitchen and sleeping quarters. Each room had about 5 bunks in them . each room housed between 10 - 16 teenage boys. So tight.
They had no wardrobes, so clothes were hanging from the ceiling, end of their beds were storage spaces for their rice cookers and few pieces of crockery, they studied on their wooden beds, hunched over, doing their school work. 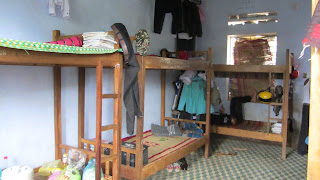 The windows had bars on them but no glass. Winter is fast approaching and these poor kids would be freezing. I did not see many blankets. 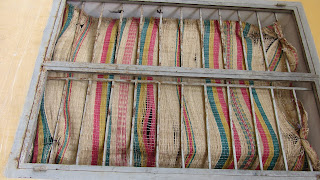 The toilets were a whole other saga. 18 out of their 24 toilets were blocked. They have been blocked for 3 years I was told. That means 160 boys have 6 toilets to use. 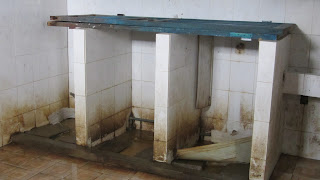 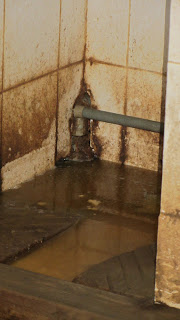 The 6 toilets that are useable are so disgusting. To get to the toilets, they need to waddle through ankle deep overflow.
There are no showers - just a square mouldy pool that collects water that they scoop out and pour over themselves.
They also have no clean water. at all. They have to bathe in dirty water. It's the same water they use to cook with and drink. 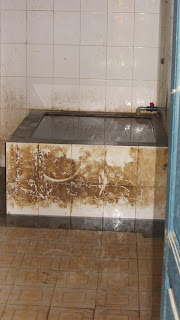 When I asked them what I could help them with, they all said that they would really like a clean water system so they can have clean drinking and bathing water. This system would cost about $1000.
Their next big thing was to fix the toilets - to fix all 24 would cost $2500.
It is so hard as everyone is in so much need here. Who do you help first? Clearly, health and hygiene in this place is non existent. I am surprised none of them are sick. I accidentally stepped into the overflow and slashed some water on me..... they gave me a glass of water to drink and I have been sick and have been vomiting since I left that place on Tuesday.